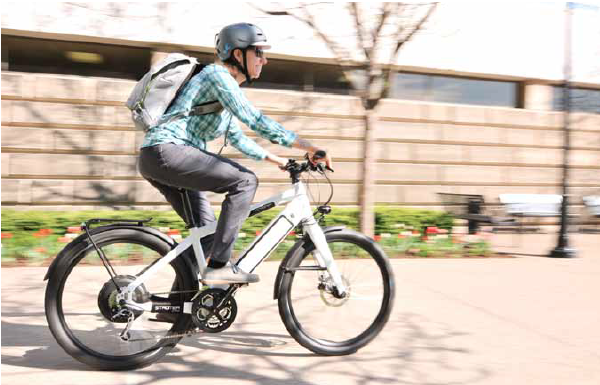 I contacted Trina after reading an issue of Bicycle Times. There had been a small caption at the beginning talking about her and her husband-I was intrigued and thought "why not?" So I sent out my email introducing myself and what I'm doing. I was thrilled when Trina said she was on board with doing an interview!


Check out Trina's blog: Nearly Outdoor Mom and find her on Twitter

You work for Dirt Rag and Bicycle Times, what about working for biking magazines do you love?
I love feeling like I'm helping encourage people to ride bikes. Whether its eco-conscious, vacation adventuring, family riding, exercising, etc. Whatever reason you need to get out there and ride, use it.

What inspired you to work for the magazines?
The opportunity to work for Rotating Mass Media was pure luck.

When did you first start riding a bike?
When I was 3, I had a hand-me-down red tricycle. Apparently I went over the bars and still have a small scar on my lip from my first bicycle crash. I think my favorite bike was a Barbie bike I had at the age of 7-ish. Dominated the neighborhood on that pink machine.

What motivated you to ride as much as you have over the years?
Growing up in Ojai & Ventura, CA where there were bike trails built in over 20yrs ago I was able to ride my bike to school, to the beach, to anywhere I wanted to go.  My husband and I were on a bike ride when he proposed to me. When we moved to Pittsburgh I decided to become a bike messenger. It was then I discovered the “battle” of the streets. I had no idea it existed. That people were so angry they would swerve at you on the roads. My anger and passion for cycling was fueled even more. Then I became a Mom, and I moved to an area where the school district does not allow kids to ride to school (Another discovery I wasn’t aware of until it ht me in the face). Everyone has the right to transport themselves from one destination to the next in a fashion that suits them, whether it bicycle, motorcycle, scooter, rascal, car, etc.


You mentioned your hubby proposed to you while on a bike ride-would you like to share your story?
Oh man. So, we rode bikes everywhere in CA. Didn't own a car at the time. He takes me out to dinner, plans to propose to me there and can't muster the courage to ask me at dinner. We start our ride home, which has this great steep hill we would just bomb down. Sitting at a red light, car in front and back of us, he asks me. I say yes, and we fly down the hill all smiles.

Were you both involved with bike riding before you met each other? If so, did either of you introduce a new aspect of bike riding to the other?
We were casual riders, mode of transportation in a beach town. The hubby introduced me to better bikes, which was still fixed up thrift store bikes at the time. In later years he also introduced me to mountain biking, which of course I crashed.

What are the best parts of having someone you can share a common interest with?
Sometimes it’s great and sometimes it’s a challenge. Now that we have kids we both want to ride and can't find a sitter. Roshambo who gets to ride today? But "date night" generally consists of us getting a chance to go on a nice long ride together. It's great to be able to share those quiet moments riding together.

Have you competed in events? If so, what were your reasons for competing?
I am not a competitive rider. I love to support it and ring my cowbells.

What would be your favorite competitive biking event?
I would have to say Urban Assault, which will hopefully return in 2015.

Do you remember how you felt on your first mountain bike ride? (If not a mountain biker, how about first commuter ride, paved trail ride, gravel, etc.)
Scared out of my mind.

If you had nervousness at all, what do you do or think to overcome it?
Just riding over and over again. I’ve had professional coaches tell me, “I can tell what you need to do, but I can’t make you brave.” The more you ride, the more confident you will become.

Do you use clipless pedals? If yes, what are some tips/suggestions for beginners that you would share? If no, are you thinking of trying it out at all?
Yes. Only on road & utility riding. Not mountain biking. I started by practicing clipless on my trainer, then I graduated to one foot clipless. Yes, I rode around with two different shoes on. Make sure your clips are set to easy and don’t feel pressured to use clipless. They have their benefits, but don’t let it sway your decision to ride.

If you are a commuter what are some of the challenges you face and how do you overcome them?
Weather is always a contender. Snow, rain, sleet. Ugh! It becomes a personal challenge of overcoming them. “Defeat the weather!”

Do you commute even if the weather isn’t ideal? Why or why not? If yes, what do you do to make it more tolerable?
I try my best. But I do not always defeat the weather. I need some 45North shoes! J

Have you had a bike biff? If so, how did you recover on a physical/mental/emotional level?
I have had quite a few. I’ve been hit by a car twice, and been lucky enough to walk away. I’ve crashed on my mountain bike, with no broken bones. I feel very lucky.  But, it takes baby steps to get back out there. I did shorter rides at first, took it slow.

What do you love about riding your bike?
To able to escape, disconnect, think about everything or nothing, to clear my mind, to get groceries and laugh at people pumping gas, to escape into the woods and feel adrenaline pumping through me, to encourage my kids to be active and be able to give them a life skill.


How many bikes do you have and which would be your most favorite?
I own 3 bikes. My favorite is probably my Raleigh Port Townsend. It was my first "expensive" bike purchase.
Labels: interview