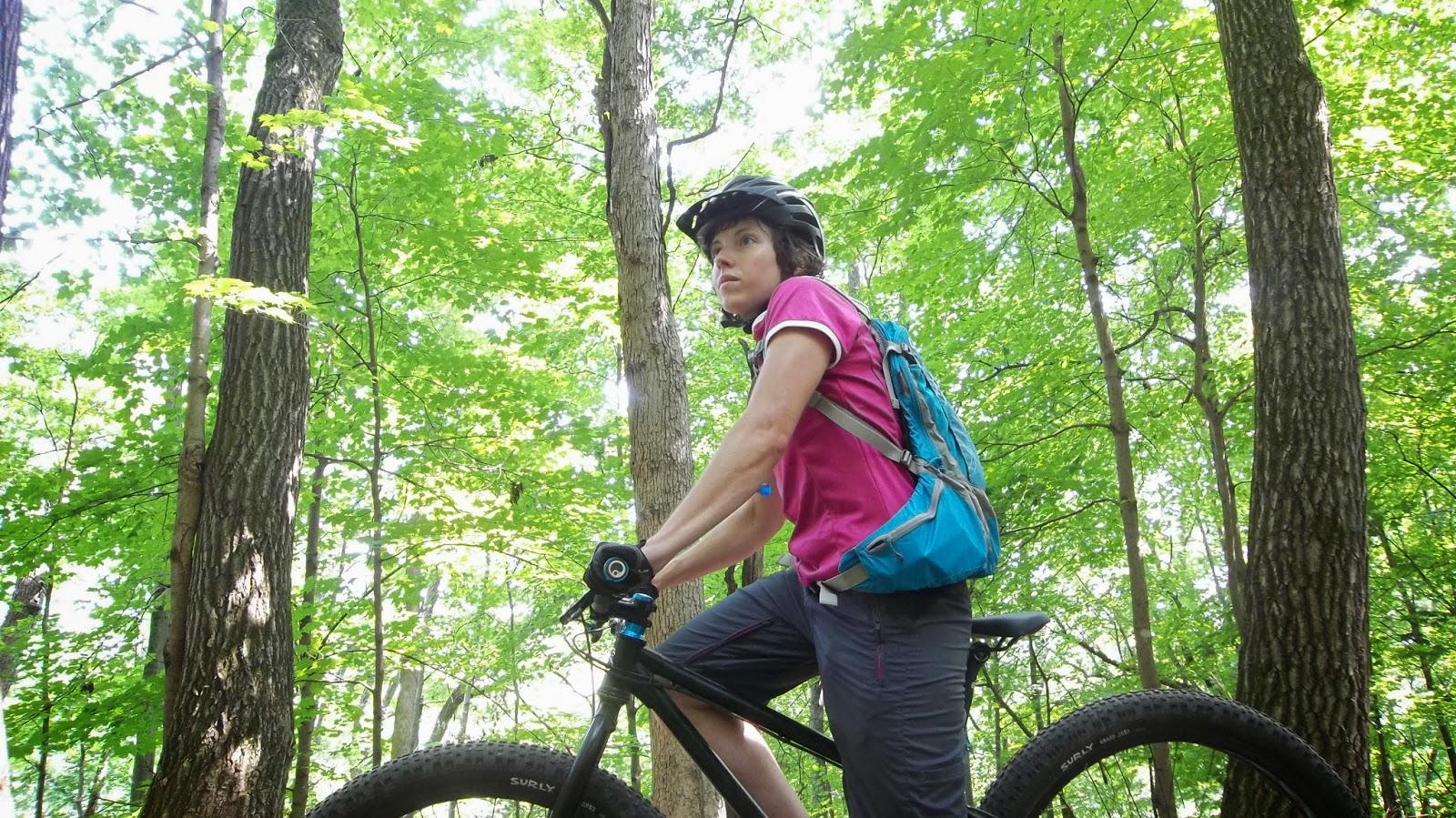 After having a rest day I expected to feel rejuvenated and ready to take on the mountain bike world. I was going to be fantastic, I just knew it!

Not only that, but it would've been my grandma Gert's birthday, and I figured I'd have to have some super-special mojo happening.

Out of my grandparents, I was the closest to her-basically her youngest "kid" rather than grandchild. It was sometimes frustrating on my end, because if I misbehaved at all I would be compared to the "big kids" aka my aunties/uncle.
Sometimes I'd even get to hear the standby "You're just like your mother!" along with "Why can't you behave like the big kids did? They were always well behaved, etc. etc."

Anyways, onward to the ride.

Travis suggested for the North 40 hill that I go slower, likely my issue the other day was going too fast into the turn and not being able to really control myself. While I fell asleep last night I visualized in my head how it would be to complete that climb. Sometimes that actually has helped me the next day with tricky spots on rides. It's like giving yourself a pep-talk, also? If you complete it in your head it's almost like completing it prior to the actual event, so maybe something you did correctly will slip through.

My first attempt at the climb was not very successful, I got over the big root and spun out. Then my second time proved almost 100% successful! I was stoked! 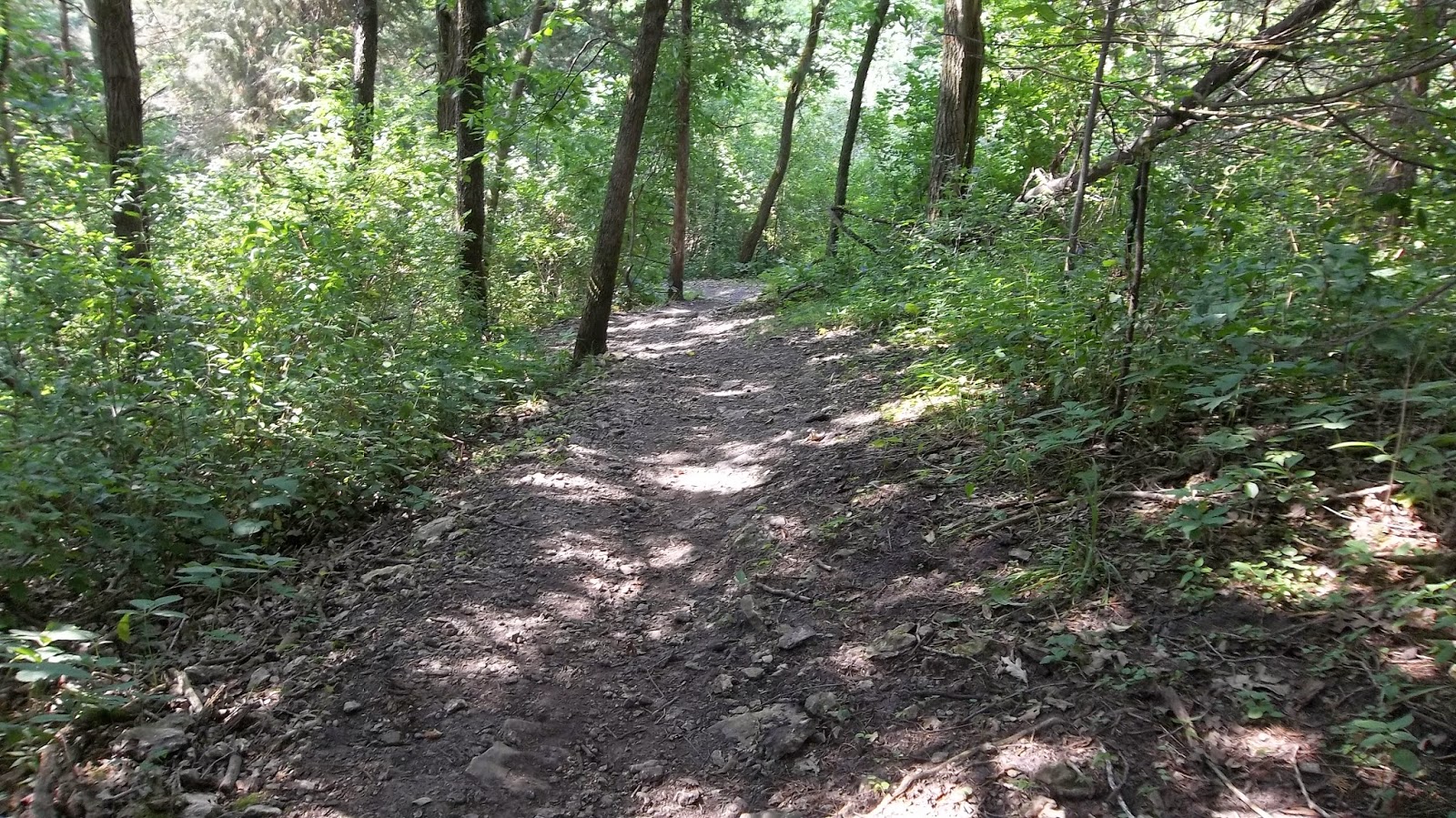 Then I decided that if I did so well that time, surely I'd accomplish it the third time....no. 4th? Nope. 5th? Nope. 6th? You've got to be kidding me.
I would session the area for probably close to 15 or 20 minutes. Time after time I'd blunder or make it over the big root and spin out, or almost ride into a tree.

I had a moment of "Josieness" and got really whiny. I was frustrated! My magical moment completely obliterated itself and here I was, trying my damndest to make it up the stupid hill. Pedal smacked hard into my knee (Oh guess what? Another bruise) and general grumpiness took over. I was having a moment where I was feeling like a failure. All of these other areas I've accomplished and I'm still having issues with this one. A lot of it is body positioning-it was a hard lesson in learning on how to climb sitting or squatting-standing was leading nowhere.

Calves were burning and I opted to say "enough" and continue on. I basically stopped relishing the success I did have and beat myself up over my failed attempts at a greater achievement.

On Fred's I had a flub as well.
The trail is a bit rocky, so when it's so dry and the little rocks are loose it's easy to sketch out. The hairpin turn is tricky, and frankly I think my aim was a little off-I slid out. I would not accept that as okay and I walked my bike up to a point where I could re-do the turn. It's a very steep climb, my legs were on fire and I wondered if I would be able to ride up Randy's successfully.
I accomplished the turn my second time, but the downhill made me a bit nervous. Loose earth, rocks, slipping and sliding a little...it made me thankful to reach the bottom without mishap. 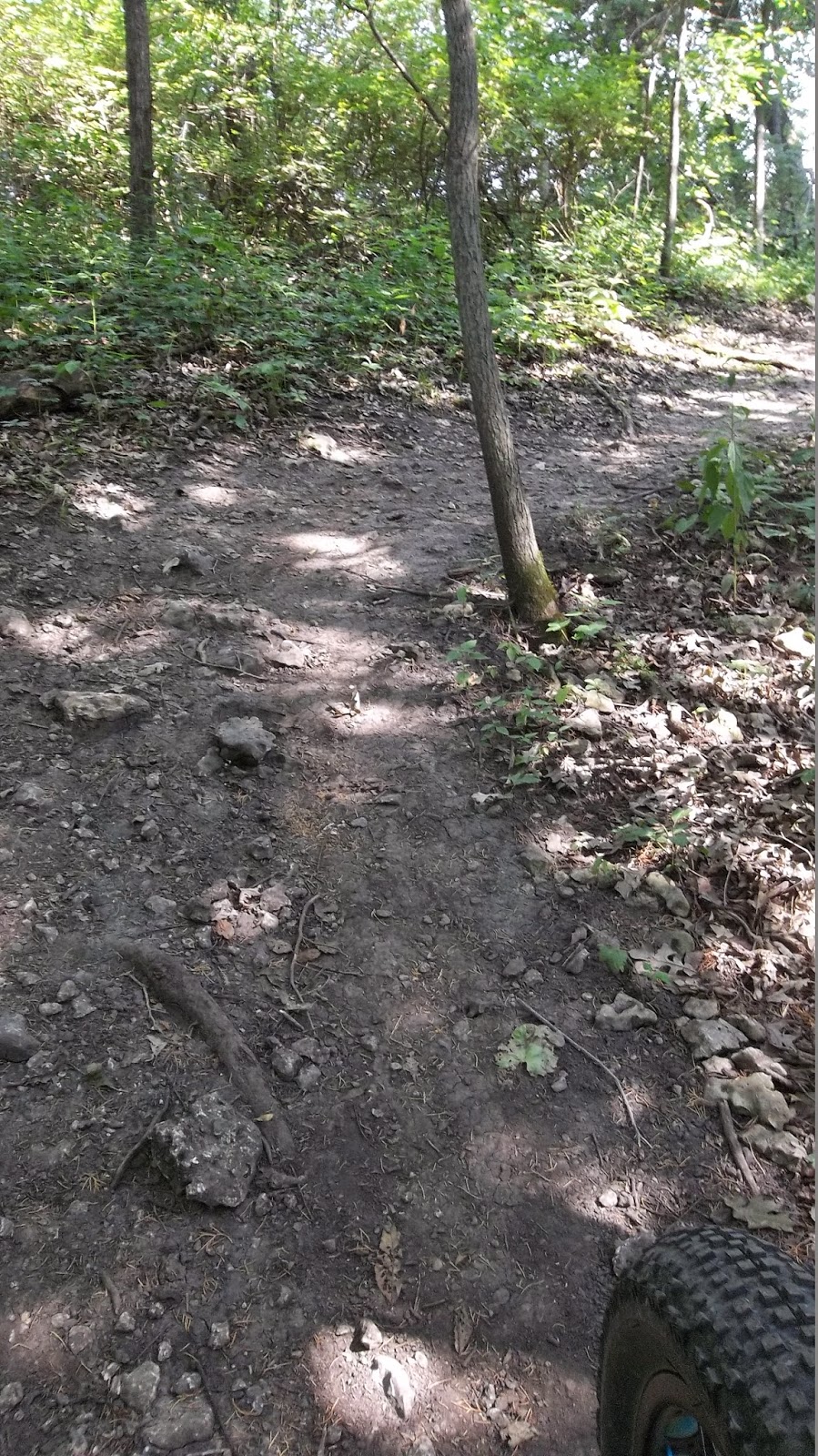 My ride up Randy's was typical, however I had to do the turn onto Backside a second time. It's a little tricky and I have to aim just right-not to high or low. I will say I did ride over the section of roots and all the way up the hill without spinning out. I was gassed once I reached the top and took a break to rest my lungs.

Frankly? I was in a pissy mood. I just wasn't riding a good ride, I wasn't "feeling" it, and I started to hate on the fact I took a rest day. "This is probably caused by not riding. Screw rest days! If I don't ride everyday I suck!"
It's all a lie. You need rest days. A rest day doesn't rid you of any experience you've gained...I was riding with a somewhat downtrodden mood already-my mood does affect my ride. Probably more than it should, and it's really hard to get out of a funk when you're already knee deep in grumpiness.


At another point I came down from a turn and before riding up a steeper hill I got too close to this little spindle of a tree and smacked my pinkie knuckle. "Damnit!"
My tire spun out partway up and I had to go back down to re-do it. I was mad at the tree, blaming the fact that it shocked me with pain. Not taking into account it was my own fault for riding too close to it. Sometimes I just get that way...it feels better to blame something else for my mishaps.

I figured I would ride up Rocky Road...almost as punishment. I have an idea in my head of riding it a couple times a week to work on building up my lung endurance. Today I wanted to ride it to punish myself for being whiny, grumpy, and overall just not riding well. A small part of me hoped that with accomplishing the climb I will be able to let myself have some sort of feeling of success.

I feel like my lungs burned less but the climb was still hard work. While I was riding up Rocky Road I gave myself a much needed pep-talk. "Your self worth is not valued on how well you bike. It's how you ride. You don't give up. You have never walked home because you were too pissed off or disappointed from a ride. You are not a failure."

It's important to remember that not all ride days are created equally. You will have days where you are not yourself, you're probably more squirrel-y than usual, you may not really be "all there" if something is already on your mind. For me, there is a definite emotional connection to the success of my bike rides and my attitude going into it. Some days you just have to have a grumpy ride so you can appreciate that you do not give up during it. You keep going and you keep pushing yourself-just because you can't make a spot doesn't mean your whole ride is ruined. There is always something else you can accomplish during your ride, and maybe next time you'll make it up that damn hill.

Be kind to yourself. Beating yourself up over not successfully riding a spot will do nothing for you-remember that there is always next time. Success is not defined so much by what you accomplish as it is based on your willingness to keep on trying.