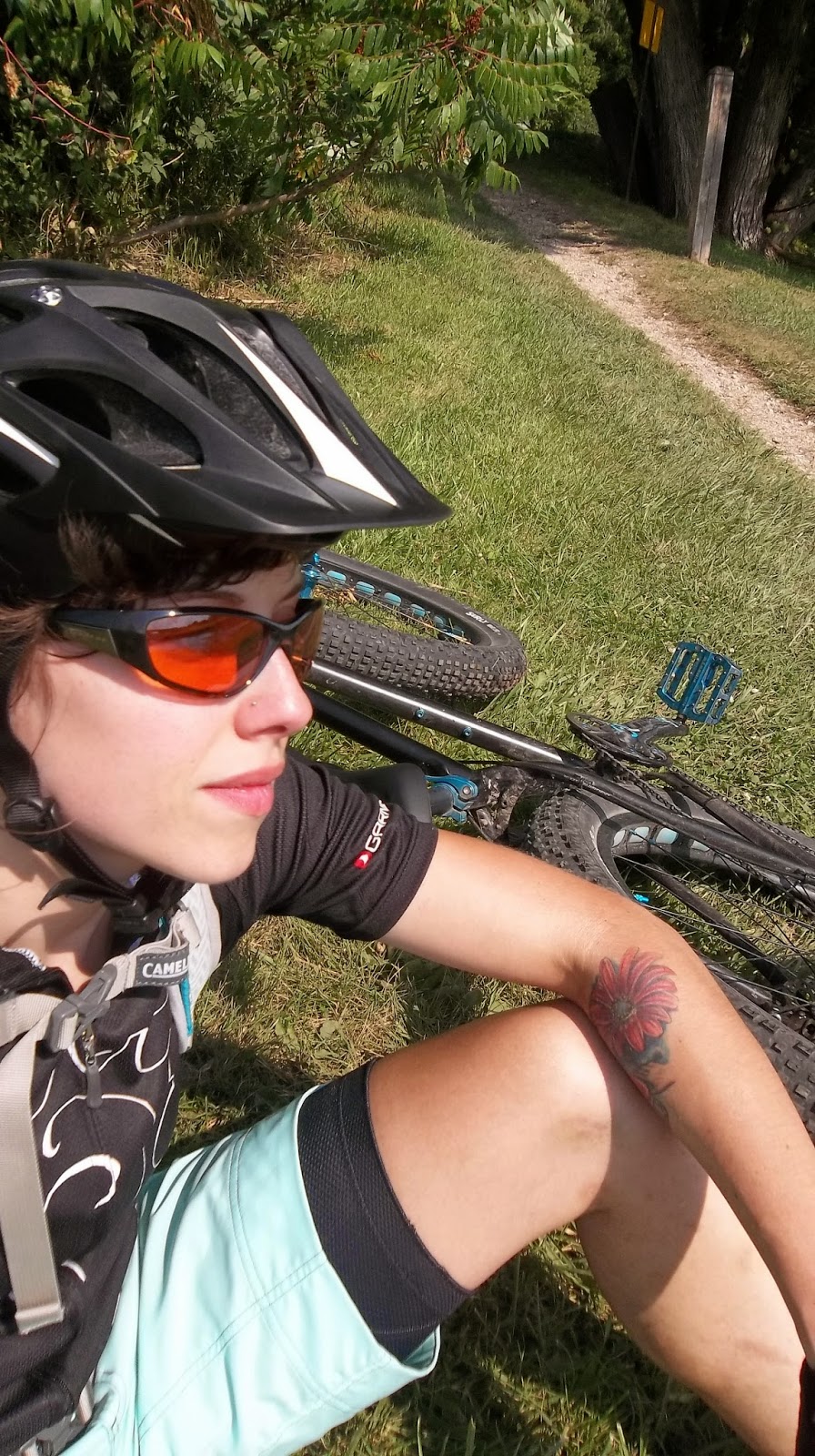 It was a gorgeous day for a solo-ride, and what better way than to accomplish some goals on the off-road trails?

River Trail is one of the easier, less technical trails for new riders and I still haven't mastered it. I can ride IPT dabless, but I can’t get up one of the hill climbs on River Trail to save my life.

It was time to test my new chain ring (sized forbetter climbing range) to see if it would assist with my mission of the day: riding River Trail without walking.

Second would be exploring up on Dunning's to a section that had some fun features to roll over. (*a tree, a log pile, etc.) Now I wanted to see if I could go back and easily master the features that made me nervous last year.
*Note that the section is not allowed to be biked on anymore as of 2016

Third would be to ride Captain's Trail in reverse, finally, after I finally figured my way around the Upper Dunnings/Ice Cave area.

I thought about riding Luge to the Randy trails but decided that it just wouldn’t be a long enough ride if I did. I really enjoy the trails around Van Peenen: IPT, North 40, Gunnar, etc. I have a hard time not starting a ride with IPT since it has flow and it's fun. Plus, when I’m doing something new I find it’s a great trail to ride for a confidence boost. 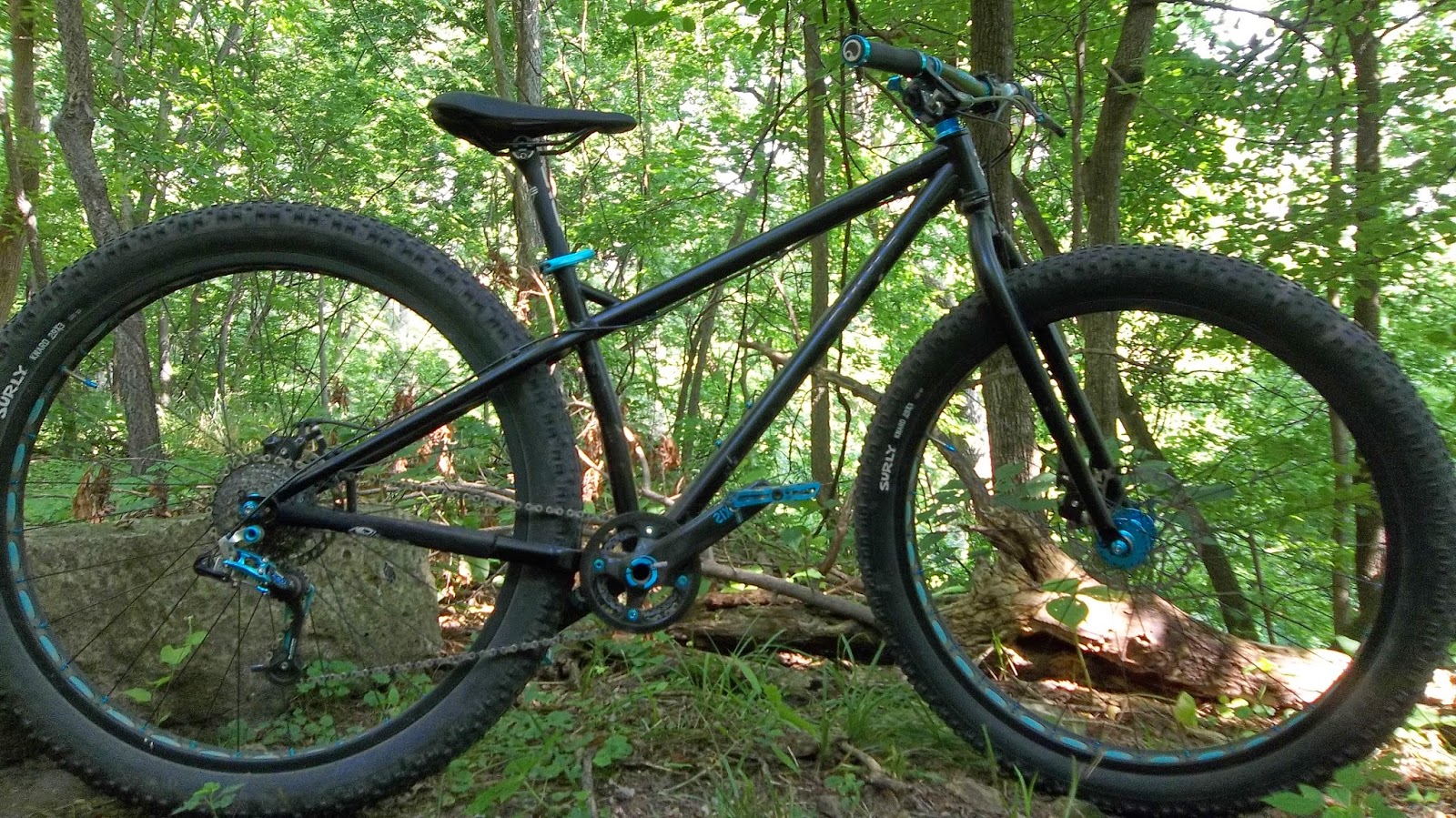 After riding IPT I decided to ride up North 40, feeling spunky, I wanted to see if today would be the day I mastered the climb. Honestly? I kind of sucked. The other day I had gained inches to my climb, today I was getting myself hung up, spinning out, or aiming at a damn tree. "Okay, enough is enough…if I spend all day here I won’t be able to climb anything later.”

I made my way down North 40, down the hairpin turn and to the trail below which has delightful flow. I practice going into some of the turns with a bit more speed, letting momentum carry me up the smaller hills.

Gunnar is easy for me now, but I still won’t look over to the side much since I dislike heights.
When I came out of Gunnar I opted to ride through the pines. There has been some maintenance done to the outskirts of the trails (grass mowed down, weeds were whacked) so I figured it would be free of wild parsnip. I used the pines as a recoup ride; practicing my turns and picking lines over roots. I kept it casual so my legs and lungs could rest as there was plenty more riding to do.

As I made my way to Fred's, I looked down Rocky Road and had a little "ping" of curiousity go off in my head. "You’re curious aren’t ya? Well…why not satisfy that curiosity? You know you want to!” Next time.

As I rode Fred's I enjoyed the flow, feeling that I'm more confident and finding it's okay to go a little faster. Towards the end, the trail is dry with loose rocks, making it a little sketchy. I was nervous of the downhill hairpin turn due to this.
I enjoy that downhill on Fred because it makes me nervous, but every time I do it it builds up my confidence.

I made my way to Lower Randy, overcoming some of the minor obstacles that have gotten in my way previously. I wasn't able to make the corner on Backside on the first go, but made it the second try. The root section also proved to be a continual challenge today, tripping me up multiple times. My legs were tired, my lungs were burning; I pedaled hard and fast. “I am going to get over them! You can do this!” the next thing I knew I was up and over. I avoided spinning out on a roots further up the trail; I made it! After I reached the top I stopped for a rest break, hoping my lungs would cooperate because I had forgotten to bring a back-up inhaler.

I continued to Captain's Trail and rode to the top of Dunning's (which houses the Dunning loop, Boa, and Mother’s Day trails.) I found the section of trail that had the fun tree “hill” and log pile. I successfully rode over everything without any feeling of trepidation or nervousness. Yeah!

After that I continued onto the Dunning loop, knowing where to turn off this time so I could go back onto Captain's and ride it in reverse. Once I finished Captain's I decided that the fastest way to River Trail was to ride down Boa.

River Trail is a great trail for beginners but it does hold some challenges, particularly a couple climbs. One is avoidable if you choose to, but my goal was to make them both, no matter how many attempts it took!
I’m not familiar enough with the trail to know when they appear and continually psyched myself out. Finally I knew I was close and pedaled as hard and fast as I could. I spun out mid-way up, damn! So close! I walked my bike back down and turned around. I’ll say I did the spiritual thing of “centering” myself, telling myself that I would get this climb, and gave it another go.

Next thing you know I’m at the top! A crazy-looking smile on my face and a feeling of relief; getting it on the second try was awesome.

Down the hill and along the river, I eventually came up behind a walker. I announced my presence and he kindly moved off to the side, and I passed slowly. I looked ahead to scope out where the next climb would start. As soon as I came around the corner I pedaled as hard and fast as I could, spinning out halfway. “Aww man!”

As I walked my bike down I looked towards where I had come and saw the walker coming closer, that lit a fire under me! “I must get up that hill!” I turned around, pedaled harder and faster, and before I knew it I had crested the top and was heading down! “I did it! WOOOOO!”

You ride a bank and ride down and across the river up to another bank, which I did so successfully. I was thrilled! I was able to fully complete the “beginner” trail that I pretty much skipped over all the time.

Since I was so stoked, I decided to extend my ride to check out one last trail. I rode back to IPT and up the fire road to the Van Peenen pines area so I could ride down Rocky Road.
It’s a trail I went on one time last year, and I couldn't remember much about it other than it was rocky. You definitely get shaken around when you ride down it and to ride up it is challenging, too. Because I rode it once last year, I didn't remember it's start/end point. Today I learned that if I rode down it, it would take me to Death Valley just like Fred.

I tried to remember if I felt nervous when I road down it last year, I couldn't recall. I remembered there were two bridges and a creek crossing that took you up a bank and to the trail. When it came time to choose the bridge or creek, opted to splash through the creek! I ended my ride with the Luge, riding it with speed as I was filled to the brim with excitement over my accomplishments of the day.
I had a great time testing my climbing skills and proving that I am able to accomplish more than I ever thought possible; I just have to give myself the opportunity to learn, try, and practice.
Labels: fearless women of dirt growth mountain biking women bike