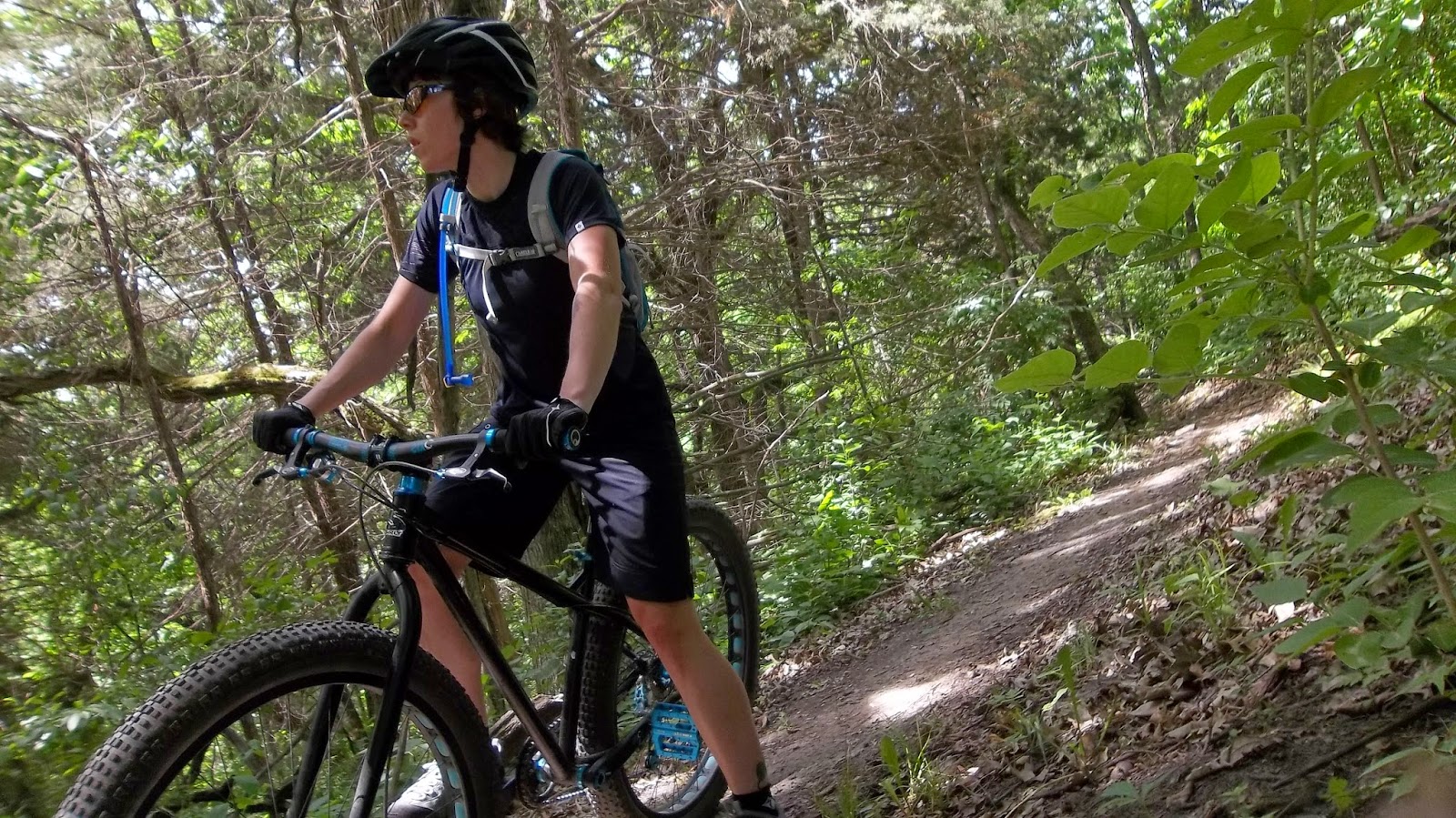 I didn't have a specific goal for my ride today other than the mission would be to wear in my new brake pads.

Words of wisdom given- "Probably don't go down anything steep right away."

My goal as of late was to ride up Rocky Road multiple times a week to see if it would help build my up my lung strength and climbing muscles.

Going for a ride after having my bike tuned up was a real treat! IT was silent, nothing was creaking from the tips and tumbles I subjected poor Bruno to. I felt like a ninja out on the trails, in stealth mode.

I decided to ride North 40 counter-clockwise, hoping to tackle the uphill today. It seemed my climbing legs weren't with me as I didn't make it up either the first or second climb. I tried the second climb one more time, figuring it would be pointless to try multiple due to the warm and muggy air zapping my energy. With a second attempt under my belt and no progress, I opted to continue onward.

Gunnar was typical and once I entered the prairie I wondered about my plan to get to Rocky Road. I wanted more than just the pines, so I decided to incorporate the upper half of Little Big Horn. It's a trail that has some fun dips and it would give me some practice with going over logs.

With one log, I had to redo my approach as I had lifted my tire up too soon and wasn't successful, but the second attempt was much better.
Later on I came to a section where there is a tree that's down which offers you two sides to go over. I evaluated the situation, feeling pretty confident that I could do this, but which side would be better?  The wider end or the one that's a little further up and angled? I opted to try the wider/flatter side, and for the first time since riding Little Big Horn, made it over that tree!

I came to the section of Little Big horn that gives you the option of going down to Rocky Road or taking a left to the lower half of Little Big Horn. (That route would take you to Dust Bowl.)

I opted to go down Rocky Road, practicing to keep my arms loose to act as my "suspension."

Keeping a looser grip on your bike while you maneuver helps keep you mobile and comfortable. I stood up over my seat just enough to not rattle my rear against the saddle, because who wants to feel every bump possible? Overall it's a great trail to get comfortable riding on because of the bumps and rocks. You learn how to be confident on uneven surface and how to control your bike without death-gripping the handle bars.

Once I was at the bottom of Rocky Road, I rode through the little steam, out to the entrance of "Death Valley" and back. I stopped for a bit to see if there might be any neat rocks in the water, but all I found were slugs. I didn't need a pet slug, so I let them be; it was a moment to appreciate the sound of the water flowing.

I headed up Rocky Road and found that my lungs didn't seem to hate me as much as previous rides. Could I be improving even tho I've done this a few times? Perhaps humidity does have a place? Either way, I came up and out without that feeling like my lungs would either go up in flames or pop. I backtracked so I could take the trail called "First Right" to see where that would take me.

I'm still getting familiar with all of the entrances and places where some of these trails go, meet up, or end. I'm probably one of the more directionally challenged individuals you'll meet. Until I make connections on my own accord I become easily confused. As I rode I could see ahead that First Right would take me to East Pines. I did a loop through Pines before going down Gunnar, figuring I would give the clockwise direction of NOrth 40 a shot.

I'm not necessarily in love with riding North 40 clockwise as the flow of the trail isn't as fluid. The other reason is the hairpin downhill becomes a hairpin uphill. You have to use momentum of the downhill that shoots you up the pin, I have yet to fully master "letting go." Momentum is key and I have yet to figure out how to be confident in doing so.

I rode down the hill and shot up the turn; I was so more than half way! I climbed and came in front the down tree, I got my tire up and over. Then more climbing....holy cow! I made it up the hill! I was totally up the hill! I couldn't believe it! I had fully expected and accepted I would probably climb up the hairpin, but I surprised myself instead.

Now the goal would be to ride this side of North 40 dabless.

I marveled at the moment when I had come to the root, I rolled over it and no longer felt afraid. That, along with many small accomplishments added to bigger ones. I had to see if this was a fluke or if something finally clicked technique-wise over that uphill.

I had a big grin on my face as I finished my ride. I'll admit, I'm not a patient person sometimes, but I've learned I'm willing to be so when it comes to mountain biking.

I have my moments, but when I have times like this where things start to click into place, it's so rewarding! It's the boost that gives me the ambition to keep on riding and to prove to myself that I will become a proficient rider. I'm like a knight out there, slaying trails with my bike instead of a sword.
Labels: bikelife fearless women of dirt growth mountain biking women bike