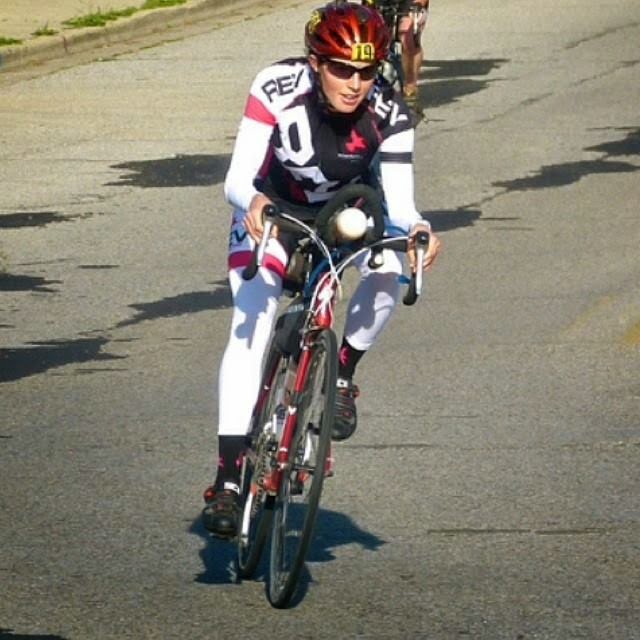 Meet Kelsey Regan who is a cyclist in Iowa. In 2012 she found about the Iowa Cross State Record and being a competitive person by nature-was intrigued. In 2014 she made the ride and became the first official woman to bike across the state of Iowa in a day!

Kelsey is truly an inspiration for women, seeing an opportunity and simply giving it her all. It just goes to show what determination and will can do for you in cycling and in life.

I started riding for fun when I was young. I brought my bike with me to college just so I could get to class faster, but when I got injured and couldn't run anymore, I started doing longer rides to cross train and eventually found out that there are lots of great recreational trails near Ames, including the High Trestle Trail, which is only 10 miles away.

What has motivated you to do so?
When I would ride on the High Trestle Trail, I realized that no matter how fast I pedaled on my hybird, I couldn't keep up with anyone on a road bike. I wanted to do RAGBRAI, so I figured I should invest in a road bike.

So without knowing anything about bikes, I walked into a bike shop (Healthy Habits in Bettendort, IA) and asked, "What's the best bike I can get for $1,000." When he asked me what type of riding I wanted to do, I told him that I didn't want to race and I probably would never ride more than 50 miles at a time. It's hard to believe how much that changed! I ended up with a Specialized Dolce. It's not technically meant for the type of riding I do now, but it has worked out great. After I bought it, I realized that I didn't enjoy riding very much because I was still too slow to keep up with my friends, so I decided to focus on running and I was really regretting paying so much for a bike that I wasn't using. It wasn't until the following winter, when I got injured and couldn't run, I met a guy who told me about how he had biked 3,000 miles in South America by himself and I got to thinking, "Hey, I have I bike! I could do something like that!" That led me to do my own tour, which gave me the confidence to get into endurance racing.

How many bikes do you own? Tell us about them!
I have three bikes: the Specialized Dolce road bike that I use for most of my training and racing; a Cannondale CAADX cyclocross bike, which I recently bought for gravel racing; and a Schwinn World Sport, which I use for commuting.

How would you describe Ultracycling? What do you enjoy about it?
Ultracycling is any race over 200 miles. The thing that I like the most about it is that no matter what my time is or how well I place in an event, it is always a big accomplishment to be able to say that I biked over 200 miles in one day.

Tell us about the couple races you competed in before you took on the Iowa Cross State record
There used to be an organization called UltraMidwest, which organized three ultracycling events in the Quad Cities area. I participated in the Metamora double century which was my first bike race ever, within a year of buying my first road bike. I suppose a saner person would have done a shorter race like a century first to get more prepared, but I was worried that if I did a shorter race first and didn't like it, I wouldn't want to do the double century. After successfully completing the double century in 2012, I set the goal of biking 300 miles in one day in 2013. I competed in the National 24 Hour Challenge in Michigan, but there was a severe storm, so the race was postponed for 3 hours, so I was only able to get 250 miles in. I had also signed up for a couple UltraMidwest races: the Metamora double century and the UltraMidwest 24 Hour, but getting hit by the car kept me out of Metamora and the UltraMidwest organizers decided to resign from being race organizers, so the event was cancelled. Since had already put all the work in, I wanted to do another race, so I ended up going to California for the World 24 Hour Championship, but was only able to get in 240 miles because of bad road conditions.

You mentioned you had a minor encounter with a car that kept you off your bike for a bit-what happened? Was the emotional/mental recover easy or did it take a bit for you to feel alright about the situation?
When I was younger, I rode horses a lot and also fell off more times that I can count. They say that you should always get back on as soon as you can because the longer you wait, the more afraid you will be. I think that getting back on a bike after an accident is pretty similar, so as soon as my injuries healed and my bike was fixed, I got back on and started riding again. 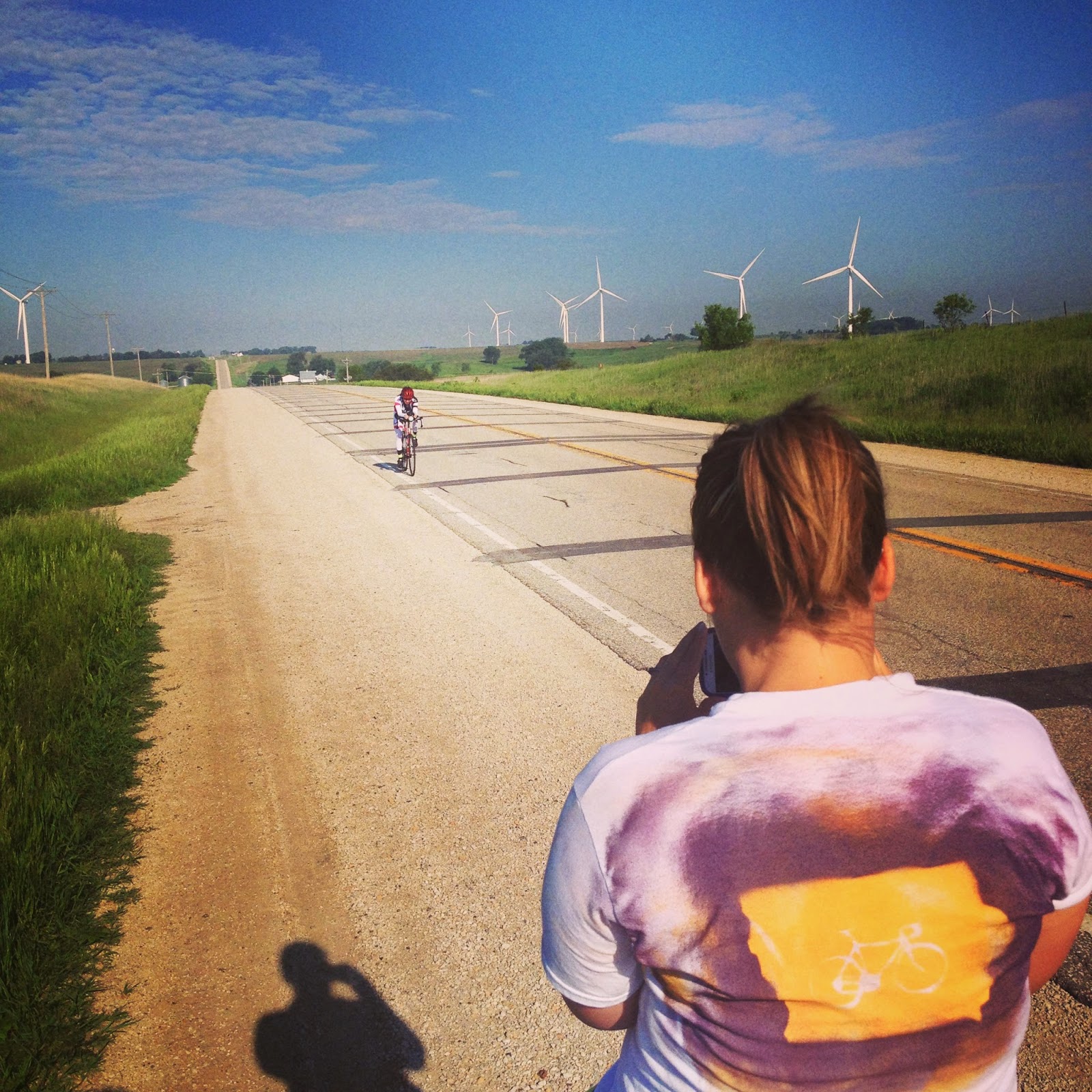 How did people react when you told them you wanted to be the first woman to complete the Iowa Cross State record?
Most people think that RAGBRAI is an extreme physical challenge so when they find out that I biked across the state in a day they are really amazed.

How did you cope with the weather when it was so unseasonably warm?
As a cyclist in Iowa, I know that I have to be prepared for any type of weather. I just had to remember to keep drinking water and Heed (a Hammer Nutrition hydration product). I was lucky to have a great crew who filled up bottles with ice and drink mix to hand off to me so I didn't have to stop.

How did you keep yourself going on a mental and emotional level when it seemed like everything was going a bit downhill?
I just kept thinking about all of the people who were supporting me. Since I brought my friends along with me, I wanted to finish to make it worth their time.

I swear headwinds seem to follow me where-ever I go! How did you mentally cope with them? What do you do now?
Although biking with headwinds is never fun, it definitely makes you stronger. I did a 300k brevet this spring that had 30 mph winds with gusts of 35-40 mph. It was awful riding in wind that strong, but it definitely made me more confident for the 10-15 mph headwind that I had for my cross state ride. During the ride, I kept thinking to myself that I was lucky that the winds weren't stronger.

What would you consider bike riding essentials for gear and clothing? What do you like for products and would recommend?
The nice thing about ultracycling is that aside from a bike and a helmet, there really isn't anything else that is essential, which makes it easier for new people to get into the sport. There are definitely things that make riding long distance more comfortable thought. Aerobars are a big benefit both for speed and comfort (having different arm positions is really important so your arms don't get tired on long rides). I also use sun sleeves instead of sunscreen because it doesn't work well to stop every couple hours to put sunscreen on sweaty skin.

Do you ride clipless? Any suggestions that you would give to someone new to the system?
I use clipless pedals, which are really important because they improve pedaling efficiency. I would recommend trying them out on a trainer or stationary bike to get comfortable with clipping in and out before going on the roads. Once you get used to them, they are really easy to use, you will be able to clip and unclip without thinking.

What suggestions would you give to someone completely new to bike riding?
Don't be afraid to challenge yourself. You will probably be surprised by what you can accomplish if you try.

What suggestions would you give to someone looking to compete in bike riding?
Don't get too caught up in results from individual races because many factors (weather, competition, nutrition, etc) can affect your performance, instead look at how far you've come from when you started riding.

What have you learned about yourself with these experiences?
I'm always up for a new challenge. Even if ultracycling doesn't work out for some reason, I will probably be able to find some other adventure.
Labels: interview