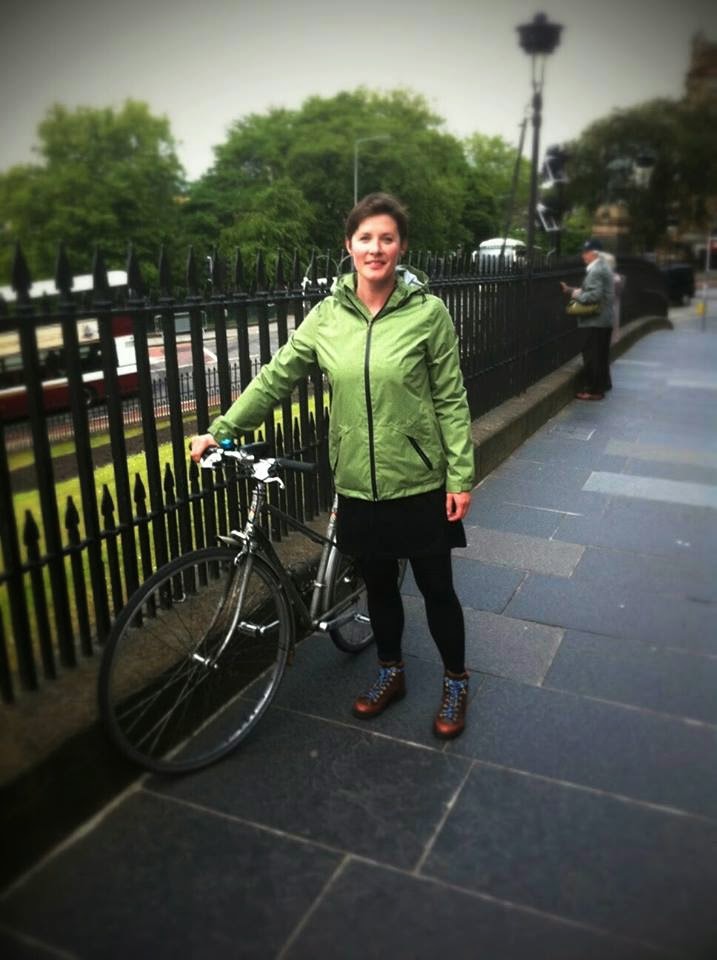 A native of North Dakota, Johanna currently lives in Scotland and manages an award-winning international education project at Edinburgh University and has co-founded TEDx University of Edinburgh, Trade School Edinburgh, Penny in Yo’ Pants, and Cyclehack.

When did you first start riding a bike? What motivated you to ride as much as you have over the years?
I rode the bike a little bit as a kid but mainly recreationally. A couple years ago, I moved farther away from work and was frustrated with being dependent on buses, so I started cycling.

I’m now hooked on the independence, the possibilities a cycle presents, strong legs, the connection to my journey, and the wonderful people I have met since Bikeable Jo. And I love my bike which I talk a little bit later.

What kind of riding is your favorite? (paved, gravel, mountain, etc.)
There is nothing better than being out in the great outdoors on a mountain bike, but I have to say - I love city commuting by bike. The other day I was running errands and catching up with friends around town and was curious what kind of distance I had covered - 26 miles! I think being able to be independent and in control of your transportation is addictive and I love how quick I can cover distance in town and not even know it.

Do you remember how you felt on your first commuter ride?
I remember my legs being really tired! There are some killer uphill streets in Edinburgh and I had a few on my morning commute - so my thighs were burning, I was sweaty, and really tired. But as I quickly learned, any hard work you put into an uphill is totally repaid when you get to go downhill on the way home.

If you had nervousness at all, what do you do or think to overcome it?
I had a bike buddy! My friend at the time (not surprisingly, now my partner) would ride with me every morning. He would go out of his way so we could take a route I was comfortable with before I hit the busier streets. After a month of this - I felt a lot more confident with the flow of traffic and my route so I was ready to try new ways around town. I was also accountable to him - I couldn’t just not cycle in because he was waiting for me.

If you are a commuter what are some of the challenges you face and how do you overcome them?
Bike storage - we live in a small flat so bike storage is difficult, especially if you are using your bike everyday and can’t necessary store it in the back closet. With Scottish weather, it is almost always wet and dirty - so this does make it difficult to store inside. But once you have a system (and take some inspiration from some cool bike solutions online!) this can be less of a challenge. My work provides some great bike storage - so making sure my bike is safe and sound at the other end isn’t necessarily a problem, like it may be for others.

Storage on the bike was also difficult to crack at first as I found I had to pack everything in a rucksack and throw on my back. Pretty quickly, I started wearing on my bike what I wear to work. I refuse to change clothes because it’s such a hassle on both ends of the trip, and I like how my style has changed to be more bikeable. I also stumbled upon the Wald bike rack which changed my life. I recommend it - http://bikeablejo.com/2013/07/28/bikeable-tips-storage-on-the-bike/

Obviously, some roads are not as safe as others and drivers can be challenging. But the more experience I get on the roads, I feel a lot more confident in traffic and with other road users. 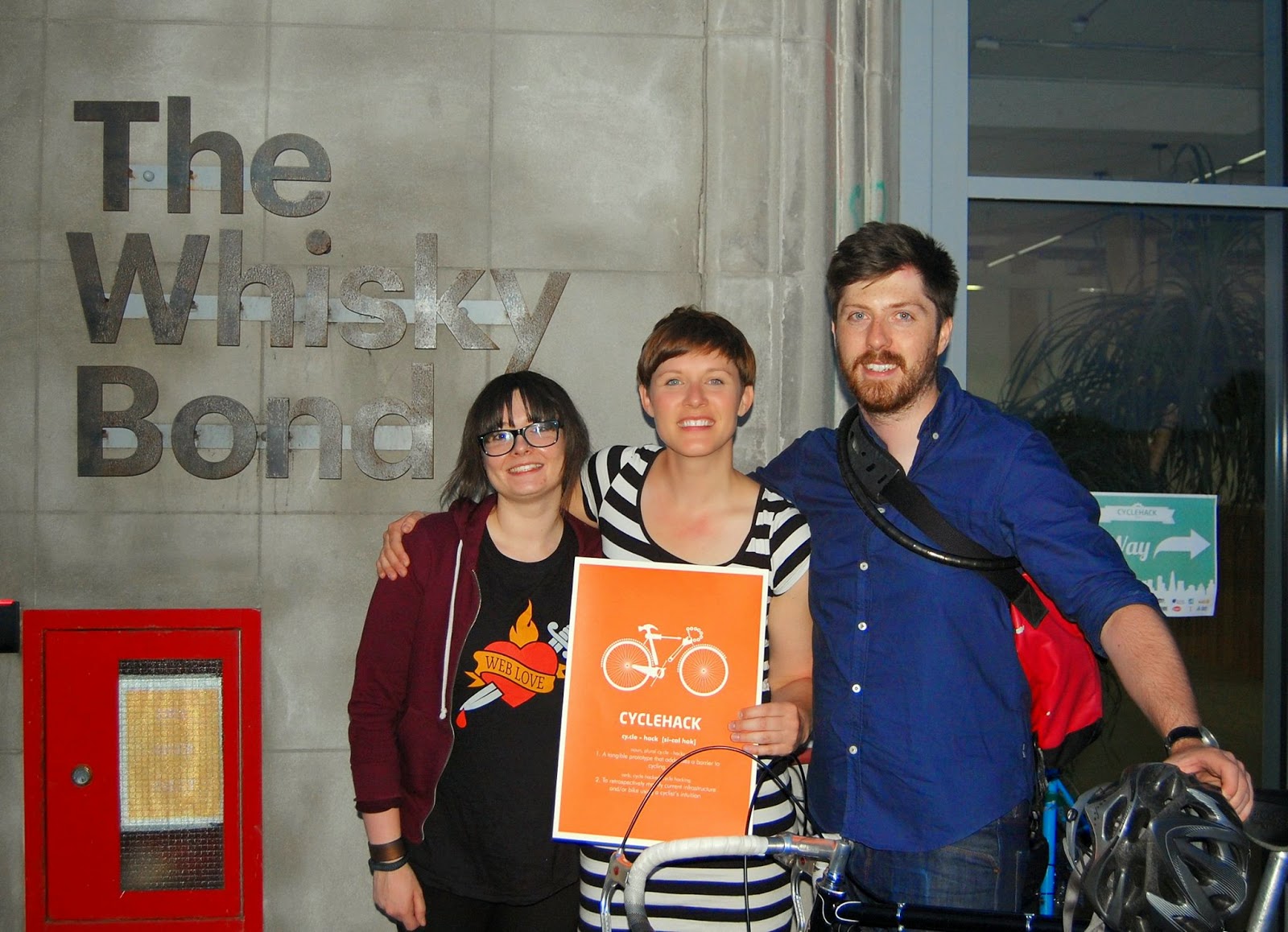 Do you commute even if the weather isn’t ideal? Why or why not? If yes, what do you do to make it more tolerable?
The weather here is tough going - especially when it can change so quickly. I’ve become a lot more comfortable with cycling (and living that matter!) when it’s raining and just being a bit wet when I get into work. When it’s really bad in the morning (especially windy), I would think about taking the bus into work but most times - I try and get on the bike!

Have you had a bike accident? If so, how did you recover on a physical/mental/emotional level?
Knock on wood - I haven’t on the roads. We went mountain biking this past weekend I had a small spill, but nothing serious. I have had some close calls on the roads and it’s a good reminder how vulnerable you are with cars on the roads.

What do you love about riding your bike?
Where do I begin!!! Sure, it’s great for getting to work quickly, keep my legs strong, and it’s cheap but there are some benefits I wasn’t expecting. You get an amazing intimacy with your journey when you are on your bike - you can be a witness to activity in different neighborhoods, on the streets, and by people you pass. While the openness of cycling does leave you vulnerable on busy streets - it also allows you to interact with people you meet at stoplights and on paths.

Tell us about your bike(s), what they are like and why did you choose them?
I just have one bike and she’s the reason I cycle.  A late 80s Saracen hybrid, I stumbled upon her at a second-hand cycling shop and it was love at first sight. Apparently, her former owner was a national team cyclist back in the 60s and it was the last bike she ever rode.  Over the past couple years, she’s been pretty beaten up from our daily commute but I couldn’t bear to replace her.

What clothing/bike accessories do you love? What would you recommend to your friends?
Well, I must say Penny in Yo Pants (@pennyinyopants)! A group of us created it at Cyclehack in Glasgow this past June because we wanted to make our favourite skirts bikeable, we didn’t want to have to buy special bikeable skirts.
By simply using a penny and a rubber band - any skirt becomes bike friendly.  It’s been an absolute hit online and we are currently prototyping better versions (with some proceeds going to the women’s cycle team in Afghanistan!). It’s been my number one accessory for commuting since we discovered it. Also, when I first started cycling - it seemed that there were two schools of cycling role models. It was either lycra clad men who had really expensive gear or it was the model-esque Copenhagenise women who looked great, but their look didn’t really resonate with mine. I didn’t fit into either of these categories. So I wanted to create an accessible space where new cyclists could feel like they fit in. I hope it’s a space that isn’t about style or skirts, but being confident, loving your strong legs, and hitting the streets.

Do you have a favorite segment to your blog?
I love guestbloggers, especially those where it’s their first time cycling and blogging. There’s something really inspiring about providing a space for others to share their stories (as I’m sure you know!).

What inspired the Porty Profiles?
I recently moved to Portobello, a seaside community in Edinburgh. Not only is it a really beautiful place to live with the sea, great shops, cafes, and pubs - it’s full of dynamic people. Cyclists sometimes get a bad reputation for going too fast on the local promenade so I wanted to not only hear more about local cyclists, but also give some positive publicity to those that travel by bike in the area.

Did you foresee your blog becoming popular when you first started it up?
When I started Bikeable Jo, I would have been happy if it was just my mom reading it.  I’m thrilled she likes it, as well as others.

How important is it for you to share to the world, an everyday cyclist?
I think the experience of an everyday cyclist is a really important voice when we talk about cities, communities, and transportation. Sarah Drummond, Matt Lowell, and I launched Cyclehack (@cycle_hack). A 48 hour event to make cities cycle friendly, it aims to generate small innovations to complement the large infrastructure improvements (safer streets, cycle paths, etc) that are happening. This past June, we ran our first hack event in Glasgow, Melbourne and Beirut - over 100 people gathered and created 31 hacks (ideas to make cycling better) addressing barriers we face from poor signage, blindspots on buses, lack of confidence on the streets, and even our handlebars!

I never thought I would be involved in something like Cyclehack or Penny in Yo Pants when I started cycling or writing Bikeable Jo. I guess that’s the beauty of the bike - you sometimes don’t know where it’s going to take you.