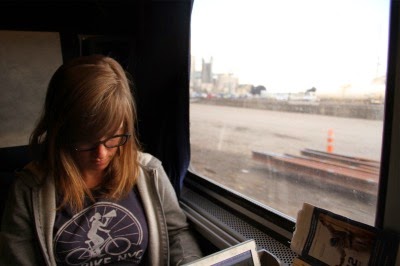 I "met" Elly Blue on Wheelwomen Switchboard after seeing a link for it on Facebook. I recognized her name as someone who contributes to Bicycling Magazine and who had penned a couple books.

I felt a bit excited-it's like chatting with a cycling world celebrity! Yup. I'm still humbled when I am able to chat with those who are an influential individual with cycling and advocacy.


Elly Blue helped create an online community (Wheelwomen) to allow a spot where women from anywhere can come together.
Post about rides, ask questions, and have support from others. It's been a fabulous community and I greatly appreciate that it exists!

Not only that, but Elly has done some fun things with writing-you will read below on what she's published (accompanied by links.) and her newest project: Our Bodies Our Bikes (Kickstarter)

You ultimately seem like a very confident woman who has found ways to bring together other like-minded women. A sense of community and togetherness where some people (like myself) have a lack. So essentially, what inspired you to do what you already do-and help create the Switchboard community?
*A number of factors inspired the Wheelwomen Switchboard. I knew there was a demand for something because my email inbox has been filling up for a couple of years with women wanting introductions, ideas, resources, connections, advice. I could sometimes help but mostly it was frustrating to not be able to take the time or figure out the best direction to point people. All these emails did make me realize that there is a demand for women to connect with each other directly about whatever they are working on in bicycling. So I jumped at the chance to start a Switchboard. I didn’t really know if it would take off, and I’m so thrilled that it has.
*I owe so much of my career and confidence and happiness to being part of all-women organizations, so being able to create another platform for people to help each other find whatever they need, be it a new job or to sell their bike or just a sense of belonging to a supportive and meaningful movement, that’s the best part for me.

What would be some suggestions you would give for someone trying to establish a local group?
When you’re creating a group, whether it’s an online forum or a weekly riding group or a one-off event, you’re essentially creating a space for people to bring who they are and what they need to the table. The more flexible and responsive to the needs of the group it is, the less work you will have to do.
** Whatever you are creating, make sure it’s something that is easy for you and others to engage with. And whoever you most want to be there, let them know. It’s like throwing a party.


When did bicycles become part of your life?
I learned to ride as a kid but never really got confident on the bike. When I was 20 I found my old bike in my parents' garage and found it fit me perfectly. I started riding everywhere. It was glorious -- I'd been spending hours every day either walking or taking the bus everywhere I needed to go, and suddenly I had a way to get around fast and whenever I wanted to.

What inspired you to take an advocate stance on bicycles and gender?
After I moved to Portland, I got deeply into bicycle activism; Later I began reporting on sports and industry and advocacy and every other part of the bike world, and there was just this slow build-up of experiences I had and encounters I witnessed and stories other women in cycling told me -- and one day I just woke up so angry that I had to write about it. The response was bigger than I expected, so I kept at it. I have mixed feelings about spending so much of my personal and professional energy talking about sexism and other iniquities in cycling; I wish it wasn't necessary. But unfortunately, it still is. 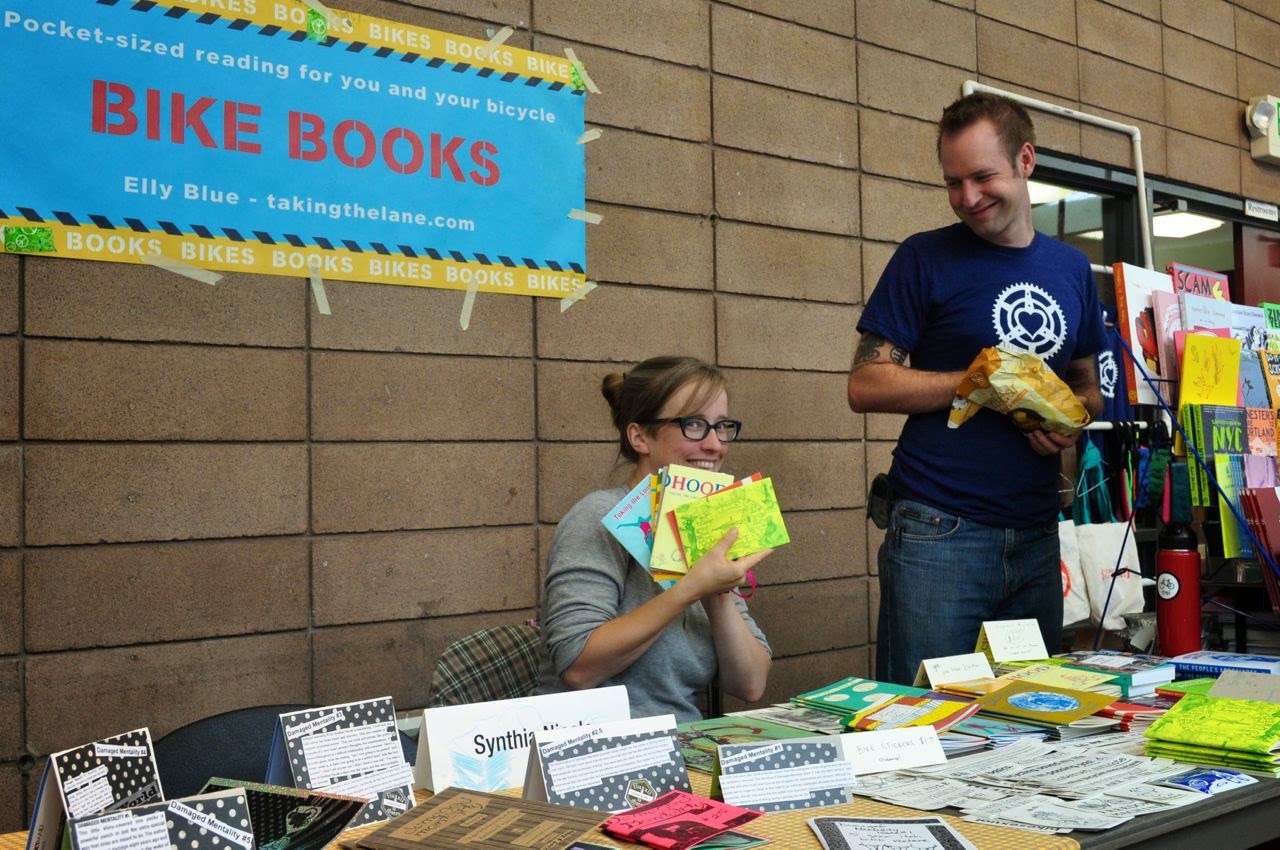 You have two books: Bikenomics and Everyday Bicycling- What made you realize you had two great topics to write about? Were there any challenges along the way?
The idea for Everyday Bicycling came from my publisher--from one of his distributors, actually. She said "I wish we had a book like this to sell" and I said "I'll write it!" As for Bikenomics, I was sitting at my desk getting ready to write a very boring blog post and it came to me all of a sudden that there was all of this great economic data about the benefits of cycling, and a few people and organizations were writing about it, but most advocates and regular people were struggling to make strong arguments. So I decided to run with it.
As for challenges, well, writing is hard. I spend so much time avoiding writing, and writing terrible things that have to be completely rewritten that I have no idea how I ever get anything done. Hard and fast print production deadlines are the only reason either book happened.

You have a publishing company: Elly Blue Publishing-how did that come to fruition? What are your goals?
I put out the first zine—an expanded version of my initial rant about sexism—so I could have something to sell and give away on tour. It just sort of built up from there, and after a year I saw that it was working out financially and that people wanted more, so I got more intentional about it. Everything that's worked out has been very much driven by authors who have come to me with ideas and then put in the hard work to create a book. My job is to take their work and turn it into a beautiful printed object, and to get it out there into the world, which is both unbelievably satisfying and hugely time consuming and expensive. Everything I publish has been funded on Kickstarter, which is just incredible -- it's like the world is stepping up and saying yes, we want this to exist.
For the future, I'm hoping to grow the business -- not necessarily into something huge, but I'd like to expand my team, keep selling books, and keep on growing the feminist bicycling movement.

What are some of the successes you've had with the company?
The success of the business is partly in that it pencils out -- I started it from scratch in the middle of the recession with no budget whatsoever--I couldn't even afford the $300 to print the first issue of the zine, which is why I turned to Kickstarter--and now it's a thriving business. It's not turning a profit, but it's solvent, and I can afford to keep doing it. So that feels hugely successful. The other success is getting to be part of the rising tide of the transportation cycling movement, and being able to encourage and provide a platform and sounding board for the ideas of so many rad people. If it weren't for that, I would not have kept doing this, I would have given up and gone out and gotten a job.

As for publishing, the most unexpected success was Bikes in Space. http://bikesinspace.com Some readers were urging me to do a fiction issue of the quarterly zine, and I hated the idea, but then I had the idea that it would be silly and fun to do a book of feminist science fiction stories about bicycles. I got a record number of submissions, they were all really great, and it ended up being so much fun -- and selling so well -- that I figured I should keep doing it. So it's an annual thing now. The second volume just came out and a third is in the works.

You'll be having a book based on one of your most popular zine- Our Bodies, Our Bikes. Tell us about how important this book will be and why it's such an important topic?
This comes from another publishing success story -- the original zine by that title was the fifth issue of Taking the Lane. I sold a thousand copies within six months, which is two to five times faster than almost all the other zines, and figured that was a sign I should do a book. I'm only now getting around to it. It's more relevant today than ever -- there are so many women who are getting started cycling, and a growing conversation around everything from saddles to pregnancy to hot flashes to periods to simply how to do it. Much of the content of the book isn't gender specific; it sort of mirrors the conversation about bicycling and health up til recently, but women are the assumed audience rather than men. 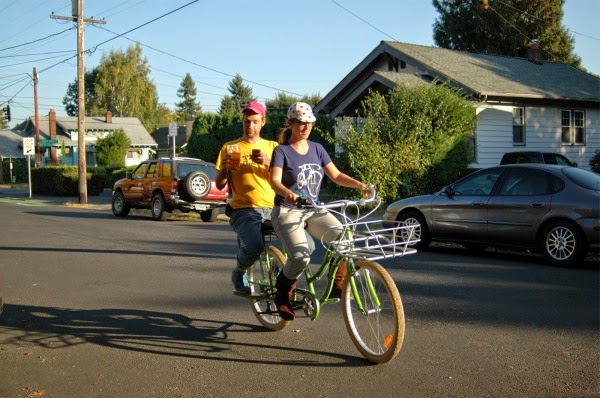 What would be your message to women (or anyone) who is on the fence about riding a bicycle?
Give it a try. It's supposed to be fun, not a huge chore. One of the most important factors to having a good time starting to bike is who you ride with -- look for people whose company you enjoy off the bike, and if they aren't already cyclists maybe you can learn together.

What is something random about you that people may or may not know?
I dropped out of high school and hiked, bused, and hitchhiked around the US for two years. If I'd been into bicycling back then I probably would have gotten myself into a lot less trouble.