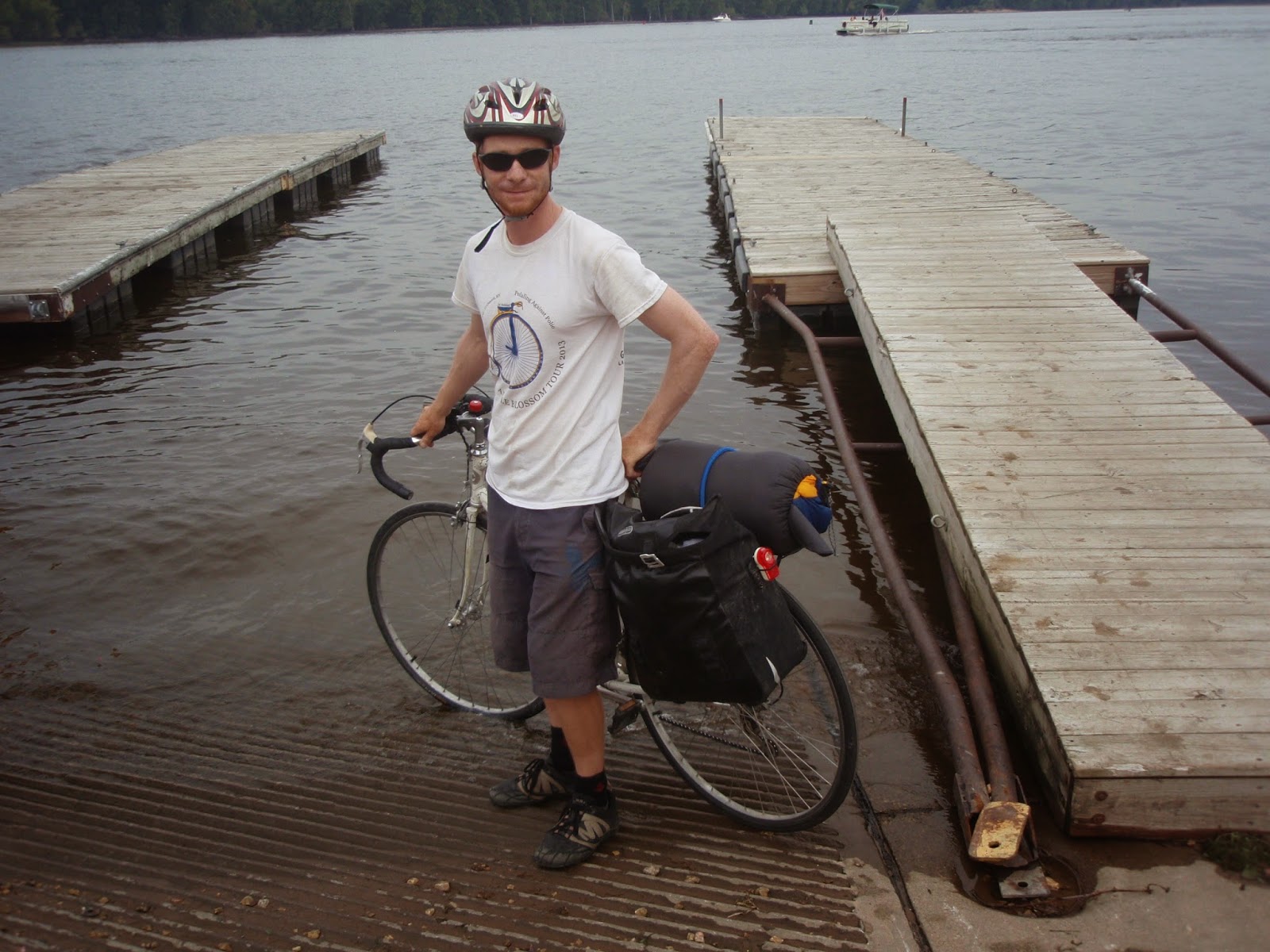 As a relative newcomer to Iowa and to the biking scene, I had only heard of RAGBRAI within the last couple years, shortly after moving to Decorah.  And my initial impression of it wasn’t all that appealing to me – a whole week riding across boring terrain from one sleepy Iowa town to another and having to imbibe copiously for any semblance of fun.  So I marked the ride off as “not for me.”  But as RAGBRAI approached this year, I heard from people who I would not describe as hedonists that the ride is a must-do and lots of fun regardless of riding style.  So the thought of participating fermented in my mind in the weeks leading up to it.

As the ride drew near, I knew I could not afford to take a whole week off from work at Seed Savers Exchange, during this busiest time of year.  But with the route being more northerly this year, I entertained the thought of taking Friday off work and connecting with the riders in Waverly on Thursday night and completing the last two legs of the ride, from Waverly to Independence on Friday and finishing in Guttenberg on Saturday.  Rather last minute, I devised a plan to ride down to Waverly after work on Thursday with all my gear and then ride back to Decorah from Guttenberg on Sunday.  It was a crude plan, with the details largely not worked out, but I liked it.  If the ride itself proved to be as boring as my initial impression, as least the distance would be epic.  And it would satisfy my occasional recurring desire to test the limits of my endurance.

I have done a few single-day bike tours within the last couple years, but I had never done any overnight trips.  I commute almost daily from town to work at Seed Savers, a twelve mile round trip, so I am fairly fit and comfortable on my bike – a well ridden almost fifty year old classic Crescent bike from Sweden that my dad bought while working in Germany in the 70’s and brought back to the States with him.  It’s an old racing bike that he had taken very good care of and handed down to me after college when he decided to upgrade.  The bike is not a perfect fit for me but it has lots of sentimental value and I’m very fond it.  I had logged nearly 800 miles on it before RAGBRAI this season alone. 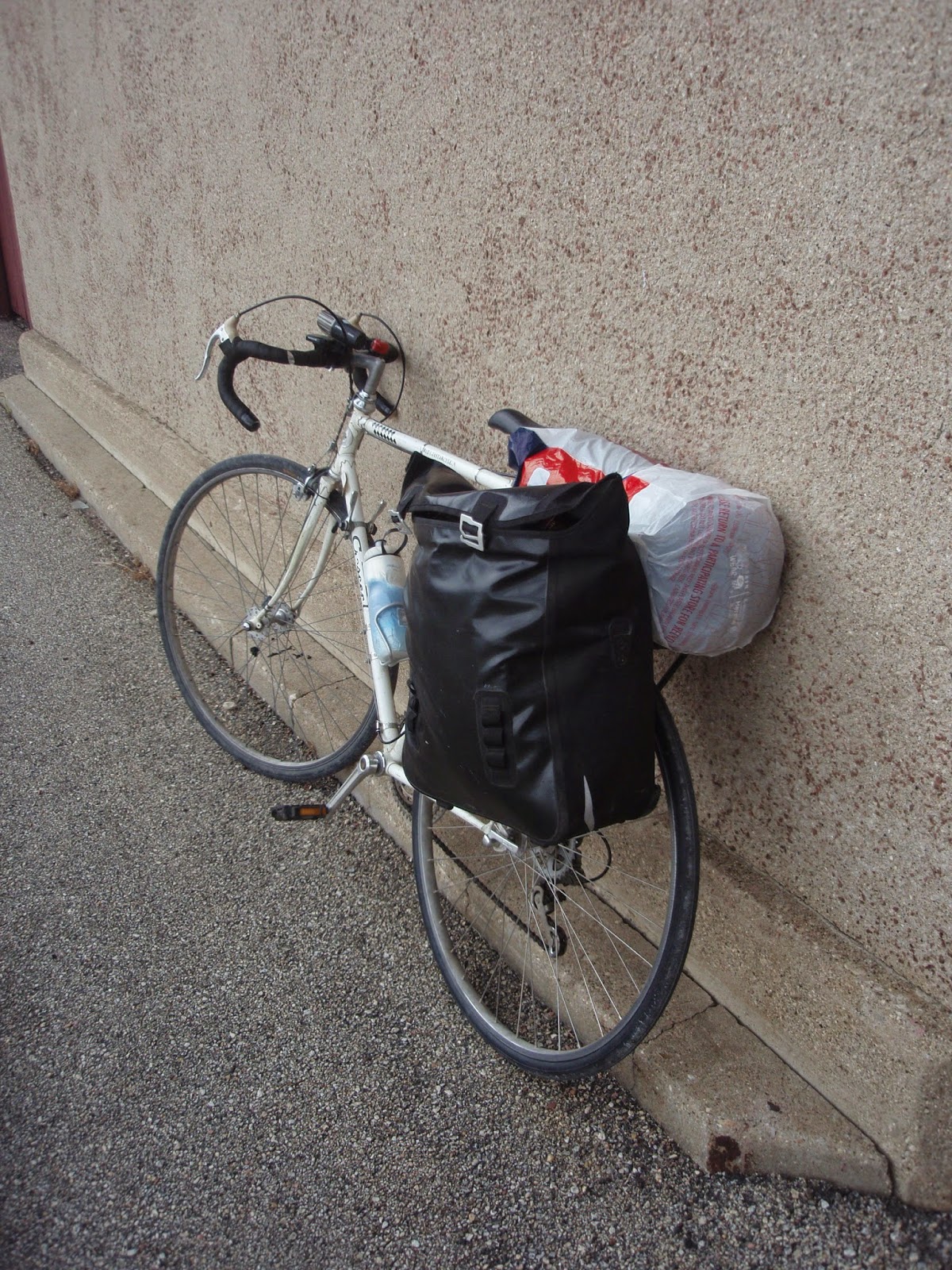 As the ride approached, I began to get things in order.  I calculated the bike route to Waverly using Google maps and arranged my gear.  I would take only the absolute necessities – a sleeping bag and pad, a small tarp in case of rain, sunscreen, food and water for the ride to Waverly, a puncture repair kit, a spare tube, a small air pump, an extra shirt, a poncho, toothbrush and toothpaste, and camera.  These were all I could possibly stuff into my one Ortlieb pannier and bungy onto my bike rack.  I was pleasantly surprised the night before that all these items did in fact fit onto my bike, but with no room to spare.  On Wednesday after work I brought my bike into Decorah Bicycles for a tune up, which proved to be a very smart decision.  Travis replaced my bare-bones back tire, tightened by brakes, replaced the rusted wire for the gear shifter, and generally brought my bike back into spectacular condition.  I was ready.

When Thursday came, it proved to be a very busy day at work.  As I was running around from one garden to another, my intention of leaving a couple hours early to get to Waverly was beginning to evaporate very quickly.  No matter – I wanted this ride to test my limits anyway, so getting a later start was a challenge I embraced.  As 4:30pm rolled around, I hurried out of work, drove into town to pick up my bike at Decorah Bicycles, attached the gear to my bike, had a quick bite, and finally hit the road by 5:30pm.  It was a very liberating feeling to be on my bike with the supplies to be more or less self-sufficient for about four days.
As I headed out of town, I was in good spirits.  The weather was absolutely perfect, with temperatures in the 70’s, the sun filtered through some high cirrus clouds, and a nearly calm wind.  I tried not think too much about the 70+ miles I had to do that evening.  I repeatedly crested the gentle hills and coasted down the backsides, enjoying the solitude and freedom of riding.  As the evening wore on, the sun sank lower, my legs began to tire, and the miles on the odometer of my bike computer were not ticking by as quickly anymore.  The reality of how far I still needed to ride that evening began to creep into my mind and started making it difficult to enjoy the moment.  At mile 27, I crested a hill, dismounted my bike and tried to come to terms with my current state of exhaustion and the remaining distance and number of daylight minutes remaining.  It was going to be very late by the time I got to Waverly.  But I was determined to get there regardless.  So I pedaled on and by mile 35 I hit a powerful second wind – something I’d never experienced before.  When dusk approached and I turned my bike lamp on and kept pedaling. By mile 50 it was pitch dark out and I worried that my lamp would run out of battery or my bike tube would puncture on the roughly 15 miles of gravel road that the Google maps bike route option took me down.  But I kept pedaling.  I finally rolled into Waverly on the Rolling Prairie Trail at 12:30am.  I was exhausted and my knees ached but I was high on adrenaline.

I immediately scoped out a place to sleep.  I knew there was a good chance of rain that night but the best I could find for shelter was a large maple tree in a city park near a cemetery.  A couple hours of deep sleep later I was roused by thunder and lightning and the first heavy drops of rain.  I threw my small tarp over myself like a blanket and hoped for the best.  The rain came down in sheets and my tarp proved to be leaky.  Before long, water was trickling into my bag and I was soaked.  Incredibly, there were no good options for seeking shelter.  I suffered through it and waited for first light.

Several miserably cold and wet hours later, the skies finally brightened.  I packed up my gear, stretched my weary legs and aching knees, and hit the road with the scores of other presumably cold and anxious riders.  It was a great feeling to finally be united with the herd.

The ride to Independence and thereafter to Guttenberg on the following day were tremendously fun.  The experience of riding with 10,000 other cyclists was energizing and empowering.  Every small Iowa town met us with tremendous enthusiasm and hospitality and showcased the best they had to offer – strawberry shortcake and Iowa’s favorite bachelor in Strawberry Point; the Wienie-ator and a great garage band in Westgate; and giant beer pong in Oelwein.  We saw a glimpse into Iowa’s small towns and the lives of their people, who not accustomed to many visitors.  We were as much a curiosity to them as they were to us.  Like the people, the countryside was authentic Iowa – gently rolling hills with endless fields of corn and soybeans; lonely farmsteads separated from each other by miles; Amish country with its beautiful gardens and children sitting on their front lawns, gawking over the passersby; and the hilly and wooded bluff country of the Driftless.  Simple and candid, this was Iowa, experienced from a simple two-wheeled contraption and shared with thousands of others.
As I made the final steep descent into Guttenberg late in the afternoon on Saturday, I did not feel the same pride as the others who had begun the ride in Rock Valley, but I did enjoy witnessing their joy and partaking in the closing events.  Slightly ashamedly, I participated in the time-honored tradition of dipping my front tire in the waters of the Mississippi.  Perhaps next year I will immerse my back tire in the Missouri.
Soon after coasting into Guttenberg, I sought a way to get back to Decorah.  After a fruitless hour of walking back and forth through the main street with a sign that read “Need ride to Decorah” (and having to explain where Decorah is to no small number of people), I decided that I would try to ride back that evening.  At six o’clock I hopped back onto my bike, struggled up the steep bluff, and began riding into the sunset toward Decorah.  Before reaching Postville, with darkness quickly setting in and my legs about expire, I called a friend who agreed to pick me up.  Half an hour later, I was relieved to be back home.

Reflecting on the trip, I was very pleased to have taken part in the ride.  It exceeded all my expectations and enticed me to do the whole ride in the future.  But more important for me personally was the satisfaction of knowing that I had tested the limits of my endurance.  Through the exhaustion, I was enlightened about my physical capabilities and mental strength.  I rediscovered the determination within myself that I too seldom call upon these days.  So I felt completely contented spending most of my Sunday recovering on the couch.
Labels: interview