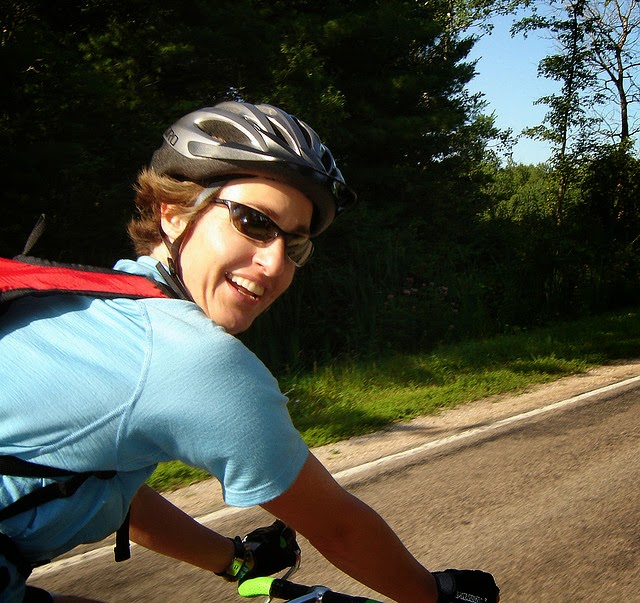 Tracy Halasinski was a founding member of BikeDenver, Denver's bike advocacy organization. She also served as Chair of the Denver Mayor's Bike Advisory Committee from 2005-2009.

Now retired from advocacy, she spends her off-bike time in the kitchen or hanging out with her black lab, Fletcher.

When did you first start riding a bike?
I don’t know exactly, but like most kids, I started with a tricycle and worked my way up from there. I started on a 2-wheeler around age 4-5. So, definitely 40+ years of riding!

What motivated you to ride as much as you have over the years?
Because I love it. That feeling of exhilaration and freedom as I take those first few pedal strokes is the same as it was when I was a kid.

And I’ve found that riding a bike is very important for my mental well-being. I’ve sorted out many of life’s dilemmas, both big and small, from the seat of my bicycle.

Have you competed in events? If so, what were your reasons for competing?
No, I’m not much for competition or racing. I’ve done a few organized events but they weren’t competitive.

What kind of riding is your favorite? (paved, gravel, mountain, etc.)
Most of my riding is of the transportational/commuter variety, so I’d say that’s my favorite because if I didn’t like it, I wouldn’t continue to do it. I seem to need a goal or purpose for my rides.

If you had nervousness at all, what do you do or think to overcome it?
Most of my nervousness has been centered around making sure I get to work on time for commuter rides, making sure I have a secure place to keep my bike and I have adequate provisions. Food and clean undies are very important and when you forget either you will be sorry. Preparation is your best tool, but just plowing ahead and hoping for the best is about all you can do.

Do you use clipless pedals? If yes, what are some tips/suggestions for beginners that you would share? If no, are you thinking of trying it out at all?
I used to use clipless pedals but have moved away from them in recent years. I didn’t dislike them and short of the first few times I used them, I didn’t have trouble using them. I just got tired of being limited on shoe choice for my rides. I also have multiple bikes and it gets pricey making sure that every bike is equipped with compatible pedals, etc. I haven’t looked back and don’t miss them.

If you are a commuter what are some of the challenges you face and how do you overcome them?
I’ve been doing it for so long that it’s almost second nature. But just by trial and error, you figure out what works for you in terms of carrying gear and dressing for the weather. There will be rides that you either freeze, roast, or get wet but you adjust. You’ll pick up clothing, bags, and the other things you need along the way. Some of it will work for you and some of it won’t but you can always sell what you don’t use! I do make it a point to make sure my bike bag is packed the night before to save time and stress in the morning.

Do you commute even if the weather isn’t ideal? Why or why not? If yes, what do you do to make it more tolerable?
I guess that depends on what you mean by ideal! But I do try to commute as much as I can. If it’s below zero or really snowy/icy, I will pass on the bike commute. I have studded snow tires that are really amazing, but honestly, there aren’t that many days where I live that they are warranted. I have rain gear and cold weather gear that keeps me comfy for rides of several miles.

Have you had a bike biff? If so, how did you recover on a physical/mental/emotional level?
Knock on wood, no bike biffs to report. 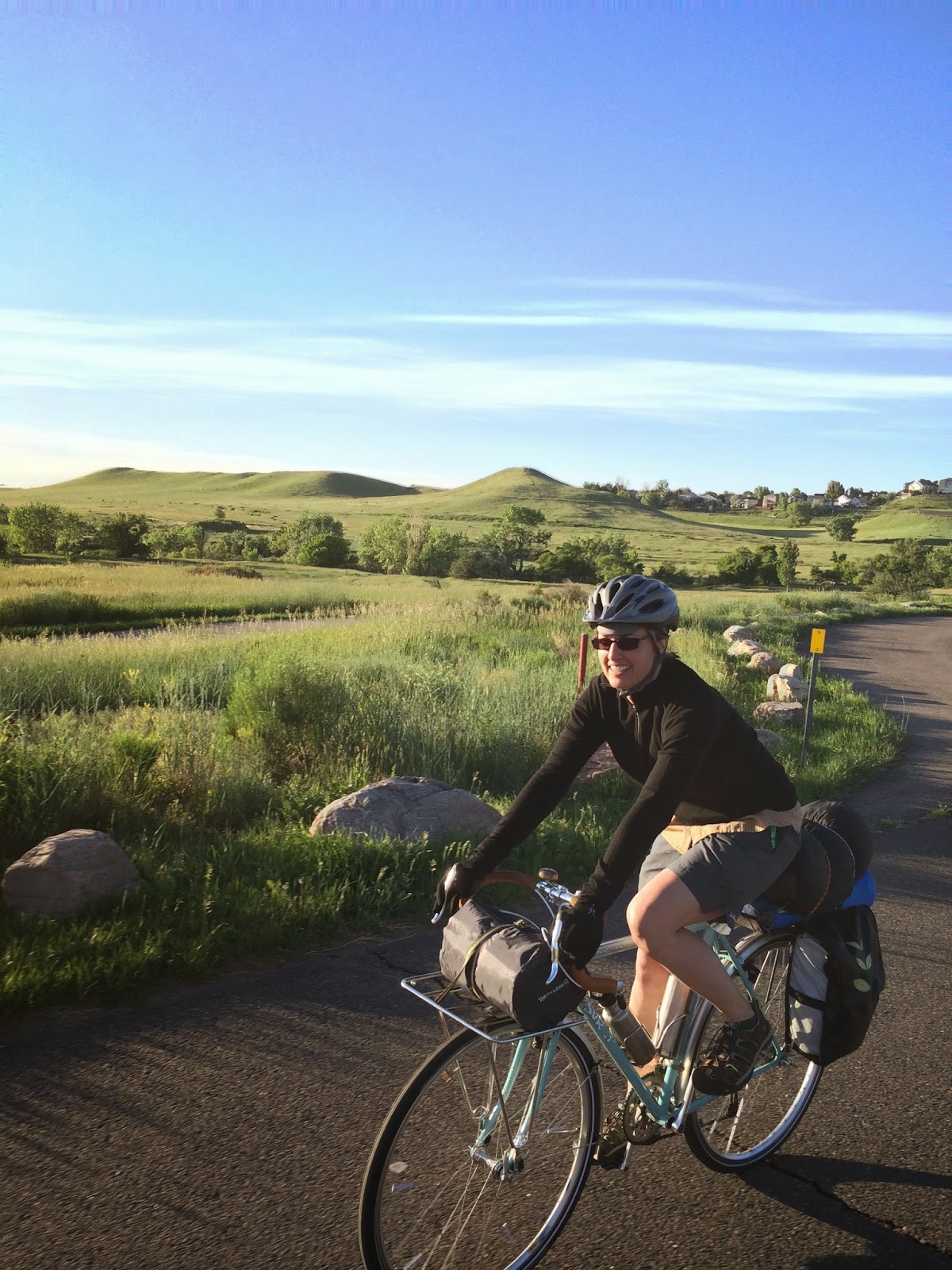 What do you love about riding your bike?
I really love everything about it. I like being outside, getting somewhere under my own power, the feeling of freedom and exhilaration, seeing the seasons change, and seeing the sights at a human-scaled pace. I just saw a video featuring Jude Kiersten of Sugar Wheelworks where she said that bicycles are just a nice way of being in the world. That really resonated for me.

Tell us about your bike(s), what they are like and why did you choose them?
I have several, so here goes:


Surly Steamroller – My first fixed gear and my great bike love. I got it in 2001 and will never get rid of it.  I was hooked on fixed-gear riding from the first ride and had this bike built up by a local shop and have never looked back.
Jonny fixed gear – several years back, I decided to buy a custom bike. Jonny Bikes was based in Madison, WI, and I met the builder personally at an event and really liked his bikes. He’s no longer building bikes and my bike was one of the last ones he built. It’s lugged steel, has top of the line components, and is a joy to ride.
Rivendell Rambouillet – I wanted one of these as soon as they were rolled out. I picked this one up for a song on Ebay about 10 years ago and it rides like no other bike I’ve ridden. It’s so pretty that I don’t ride it enough for fear that it will be stolen, scratched, or otherwise. I intend to remedy that situation, as bikes are meant to be ridden!
Surly Cross Check – This is the bike I always wanted! I ended up winning the frame in a raffle (!) and initially had it built up as a fixed gear.  Inexplicably, I hated it and converted it to a geared bike. That made all the difference and the bike has been everything I’ve wanted it to be. It’s my workhorse and is also a joy to ride.

What clothing/bike accessories do you love? What would you recommend to your friends?  That’s a tough one! I don’t buy much bike-specific clothing and mostly focus on stuff that can be worn on or off bike. What I wear the most are MUSA shorts from Rivendell. They dry easily, are of modest length, resist stains, fit well, and are made in the USA!  Other than that, I’m all about the bags. Messenger bags, saddlebags, panniers, backpacks, I covet them all. I won’t run down my bag inventory, but they all have their places in my cargo-carrying rotation. And get some good lights. Oh, and I love my Abus Bordo lock.

What do you feel would encourage more women to start riding?
A supportive environment with other women at similar riding levels. But, honestly, I think it’s mostly a matter of just getting out there. Even if it’s just for a ride around the block and building from there. If you can find a like-minded group of women to ride with, that’s also a great way to get going.


What advice do you have for someone who is new to cycling (any form.)
As I said above, get out there!  You don’t need a new bike or special clothing. Just go. If you can find a bike commuter class where you live, take it. It will help you get more comfortable riding on the road and interacting with vehicular traffic. But most of all, have fun.
Labels: interview