Meet Lauren who will be featured in Meg's documentary Sisterhood of Shred!

Lauren has an amazing interview which has been split into 2 parts. Read Part 2 here!

I hope you enjoy Lauren's interview and find yourself inspired by her words, determination, and passion.

When did you first start riding a bike?
I first started riding when I was 19 and in college...so like spring of 2007.

What motivated you to ride as much as you have over the years?
Some times training and competitive urges or the need to learn and dial a new trick, but for the most part I ride and keep riding because I love it. Riding brings me clarity and peace of mind that nothing else in the world ever has been able to. If I’m not riding I can get a little grumpy

Have you competed in events? If so, what were your reasons for competing?
I have. I have competed in many events over the years and besides the fact that it’s really fun, each one I think I did it just to see if I could. I often will set a goal and then need to test if I have reached it and what better way than a race or a comp to see where you are in your riding ability. Racing and competitions have been a way for me to set and achieve goals not only in riding but also in my personal life. Being able to say "I can" or "I did" makes a hard day seem a little easier because at the end of it you know some of your limits and have pushed yourself more than you thought you could.

What would be your favorite competitive biking event?
I have always enjoyed watching/ participating in Crankworx. Crankworx Colorado was my first race and it will always hold a special place for me. Most of all I like watching the FMB world tour and competing in women’s Slope Style events because one day I want to actually ride on the FMB world tour.

What kind of riding is your favorite? (paved, gravel, mountain, etc.)
Slopestyle for sure, but anything in the dirt is rad! DH is a close second I love the big hits and fast rippin’ through the trees. Drop me off at the mountain and I am happy

Do you remember how you felt on your first mountain bike ride? (If not a mountain biker, how about first commuter ride, paved trail ride, gravel, etc.) 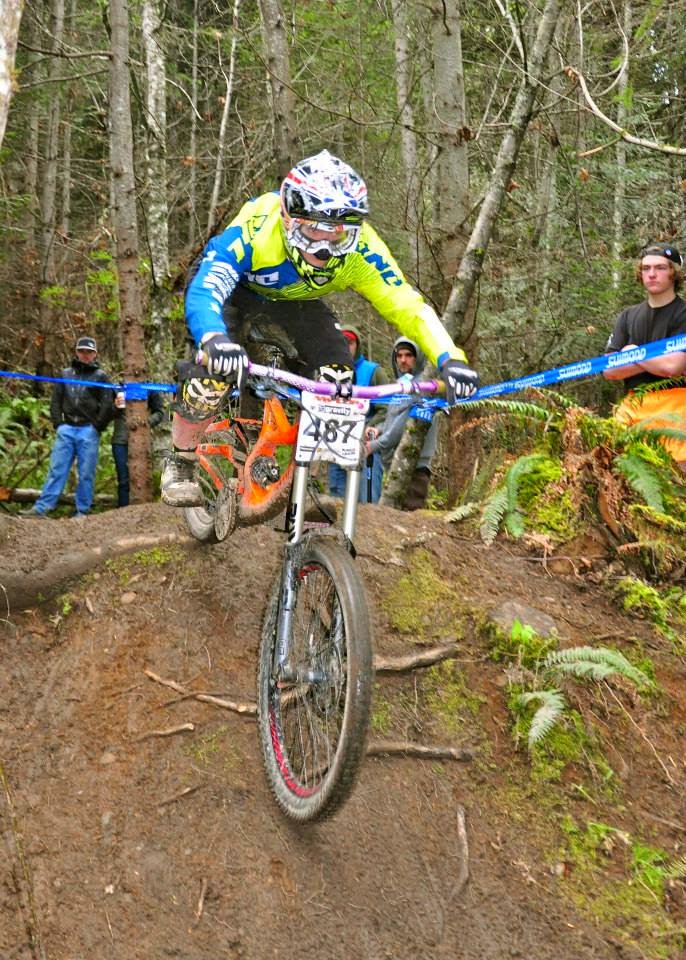 I remember it like it was yesterday, I will never forget it!
It was hot and dry, I had never ridden a mountain bike before and I was going out to a less than easy trail on a borrowed XL Hard tail (ouch) diamond back garage sale find with some friends that I had made at school. We needed something to do now that the snow in the mountains was gone. Mountain bikes it was... give it a shot, sure why not, it’s just a bike, I can ride a bike on dirt, let’s go!

It was excruciating. I rode some until I couldn't breathe. I stopped a hundred times. I walked my bike up and over almost every rock. I wheezed and sputtered all the way up that damn hill. And at the top? Just my smiling, way more athletic than me, friends beaming "okay ready to go back down now?" Christ, there's a down?!!? You mean we have to go back to the car now, well there's no other way so a little scared, I hopped back on that bike and began to descend oh so slowly...it was amazing! My first taste of downhill. I loved it, I wished for suspension, but I loved it!!

The very next day I went out and bought my first bike, I was way too sore to ride it, but it was mine, it had suspension and I have never looked back.

If you had nervousness at all, what do you do or think to overcome it?
Any time I am nervous or scared about something I try to make it as small as I can. I go and look at every aspect of whatever I am trying to do without the bike first. then with the bike I go through the steps of roll up to it, roll past to the side of it and then if I am feeling comfortable i will hit it slowly or at least only at about 70%. Not all features you can do that with so sometimes I live by my little mantra of "Find your F*#k it" and what that means to me is that I accept the consequences of my actions and I am far more intrigued by the positive that could come of this than the negative. That has gotten me through, over and off of some pretty interesting stuff.

Do you use clipless pedals? If yes, what are some tips/suggestions for beginners that you would share? If no, are you thinking of trying it out at all?
Ewwwwwww, no!! lol, let’s give a more mature response now... I choose flat pedals. I have tried clipless and I don't actually mind them too much. I use them on my indoor trainer. I coached a whole day in them and got the hang of it. Only fell over once because I forgot I was wearing them. I just don't recommend them for beginners. Too many people start on them and then can’t easily transfer to flats and if you're learning to jump switching to flats is where I would start. There is a lot of foot work to jumping that isn't as easily achieved in clipless as it is in flats. I mean it’s easy, but it’s not correct, kind of cheater in my opinion. However if you must stick your feet to your pedals, practice in a parking lot or better yet grassy area first. Make sure you are comfortable and familiar with clipping in and out and stopping and starting with them. Nothing sucks worse than falling over in front of your whole class still stuck to your bike...

Have you had a bike biff? If so, how did you recover on a physical/mental/emotional level?
Indeed I have. I don't recommend it... technically I am still in recovery. I had a traumatic brain injury from a crash during a race. It has been three years and I am hoping that the worst is behind me. Recovering from something like that is a slow process and I have had to learn to be very patient with myself. Your brain doesn't heal like the rest of your body. Physically I was fine... kinda... I smashed my leg in the crash as well, thankfully just a very huge deep bone bruise from my knee to my hip. I was walking again after a week on crutches. Mentally and emotionally have been an entirely different story.

My crash took away my short term memory and my ability to read and comprehend properly for a while. My ability to control my emotions changed as well. I would get really angry, really sad or really happy for no reason without warning and sometimes all at once. Words didn't work anymore; I couldn't get my mouth to keep up at the speed my brain was thinking so my sentences often came out jumbled. In fact I couldn't really get my limbs to keep up either. I ran into a lot of things and tripped over my own feet for a while. My depth perception seemed to be just gone. Many times friends, family, and even strangers asked if I was drunk.  Eventually I could no longer do my job as it was a speech and movement intensive job, and though I never told them exactly why, I resigned my position with the federal government. Emotionally I was defeated. Mentally I was exhausted.


The only way I was able to even begin recovering from this was to jump right back on the beast that broke me. My bike. The first thing that had to go was the fear and the second was getting my body back to feeling, moving, and responding to my brain. I just started forcing it; I would ride everything I could, every time I could. Mostly jumps and pump track. I needed to get that blood flowing to those muscles again I needed to feel my bike in my hands and on my feet. To help with the inability to read I began reading out loud so that my ears would help my eyes send the messages to my brain. I took a job up at Trestle mountain bike park and got certified as a coach. The certifications broke it all the way back down to the basics for me. It rebuilt me and I began again.

Now I have the ability to provide tools to others that may keep them from suffering the same fate. I am proud of that, I am happy that I have returned a better rider than I was before and as someone that can help others to overcome these kinds of obstacles. I still have memory and thought organization issues today and at times I still can't control my emotions, and I still have to read out loud sometimes, but it is getting better. The bad stuff fades the more good stuff I do and work on. Focusing on the positive really helps push out the hard days.
Labels: inspire interview mountain biking Sisterhood of Shred women bike