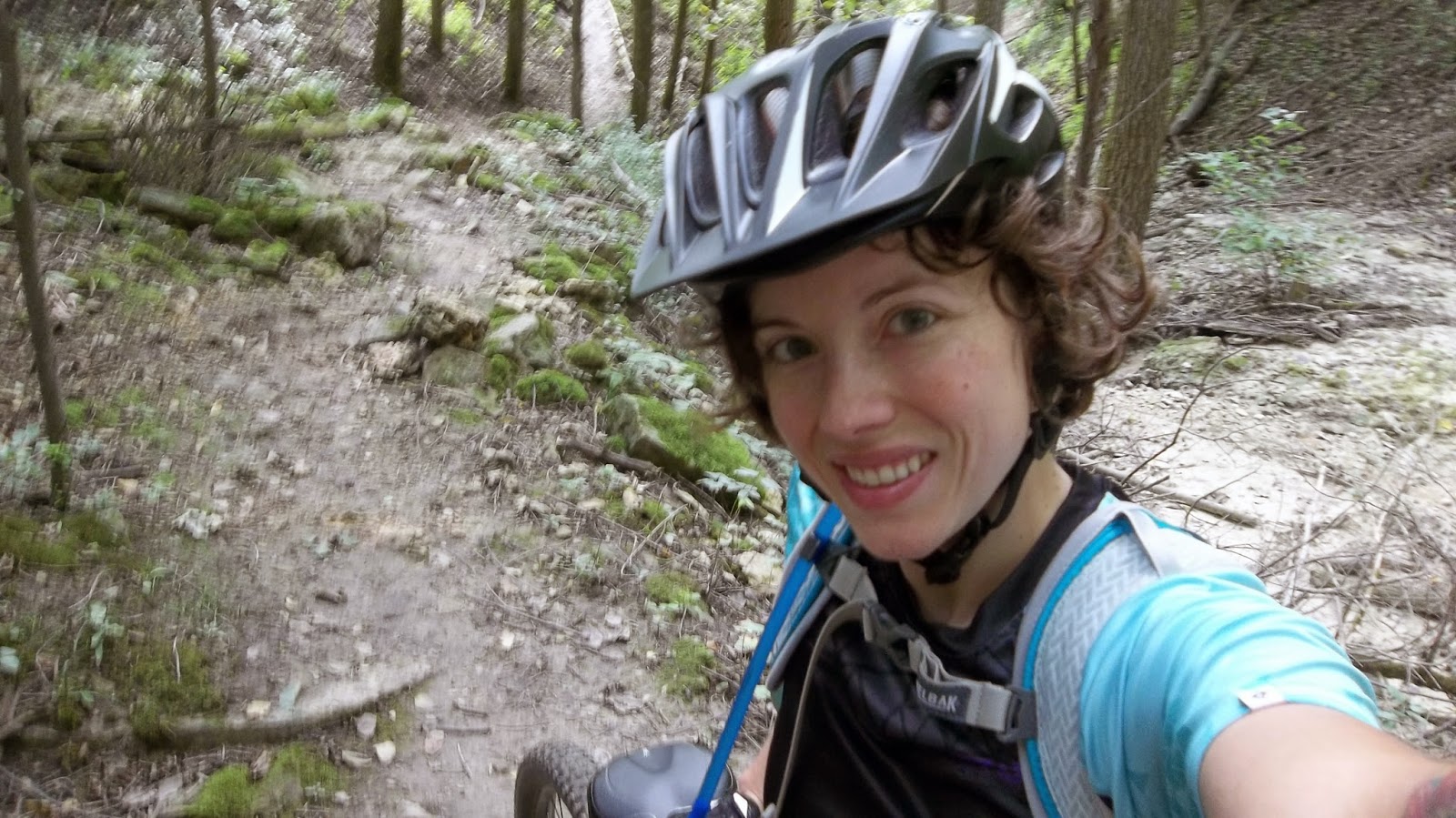 I had the feeling that the trails were getting dry enough that I could take out my other mountain bike dubbed Erza. The Trek Cali Carbon that I have ridden a handful of times now, a bike that I love, but also a bike that I am yet learning my full potential and capabilities on.


I will say that as far as human/bike relationships go, we have a pretty good one. However, there are still some areas where we’re hashing it out on.

(Look at me, humanizing a bicycle.)

I have done a majority of my mountain bike learning on a bicycle with 29+ tires, so being on a regular 29'er with slightly larger tires than typically used, is a learning curve. You don’t have as much tire to roll over things, you have to pick cleaner lines, and there are some things you just do not roll over.

I had just accomplished riding through the rock garden of IPT the day before, so it was time to show myself that I could pick a line through there with smaller tires. It took a few tries and finessing for me to get myself through-but I did! I decided to do it a second time, figuring the more times I do it the more confident I’ll be.
Next test would be the hill on North 40, which I have accomplished a couple times on this bike. It was a little drier I believe, so I was intrigued to see how it would go today.
Well…not as awesome as I had hoped.

I worked hard but felt like I wasn’t getting very far at all. I would over-aim my bike and want to ride off the trail or I wouldn’t aim far enough over and spin out on the root. I had a moment where I spun out, my foot slipped, and my pedal thwacked me hard on the knee. It was a solid hit, hitting over already bruised flesh. I had a pretty deep pinhole that started to bleed. Bright red, sweat diluted blood trickling down my calf.
I had a very low, groan-filled “OOoooOooowWWWwww” escape my lips and was a little gimpy after that.
Then I hit the side of my shin at another point, leaving a welt on my leg.

I made it most of the way up the hill, but spun out within feet of the top. I tried again many more times, assuring myself all I expected of me was to make it to the top one time. Right after my pep-talk I made it to the top and continued on. My legs were sore and feeling tired, but I had plenty more riding to do.
I tried the hairpin hill, but after several tries I called it and went onward to further trails. I had already spent a good number of minutes (likely about a half-hour or so) to accomplish the hill. It was time to ride and have fun.

Per Travis’ suggestion of a technique, I wanted to go back to Little Big Horn and work on my log riding. Apparently I still struggle with getting my tire up high enough and I have not yet figured out how to lift my rear tire up. (When it’s explained to me, it seems like I would have to superglue my shoes to my pedals! Honestly….) Another way to help get your back-end over a log is to get your front tire over, lightly “lock” up your front brake, and that will help pop your rear tire up and over the log. Of course, you don’t want to “ram on it” and make yourself endo-it’s about the right amount of momentum, braking strength, and being aware of what you’re doing.
I found success! It took me a few tries to get it figured out, but I managed to get my rear tire over without sending me over the bars!

I decided to ride down Fred’s and ride up Rocky Road, since I heard that the fallen tree on Rocky Road was now gone. My legs, however, were not thrilled with the rocky climb; wet rocks also made it difficult. I did manage to get to the portion where there is a trail called “First Right” that will take you to the East Pines. I thought for a moment of either ending my ride and going back down Fred’s and to the Luge-or going through part of the Pines and re-doing the top of Little Big Horn, then Fred’s and the Luge. Legs were achy, I was getting hungry…but I was already there…so why not?

When I made it back to the log on Little Big Horn that I practiced on, I decided to practice some more. The first few times I kept flubbing up, but eventually I got the knack of it again. One more small skill acquired, now it’s time to master it!

When it was time to ride down Fred’s, I was ready to go home. The Luge was fun, fast, and exhilarating (like usual) and I felt really good about what I had accomplished for the day. I also attained some more bruises, scratches, and holes.

Later that evening Travis started to chuckle and said “Oh honey! I love you even tho…” and I looked down…there was a golf ball sized bruise on my thigh. “You love me even tho I beat myself up!” I said.