A Reformed Bicycle Hater...A Look Back. 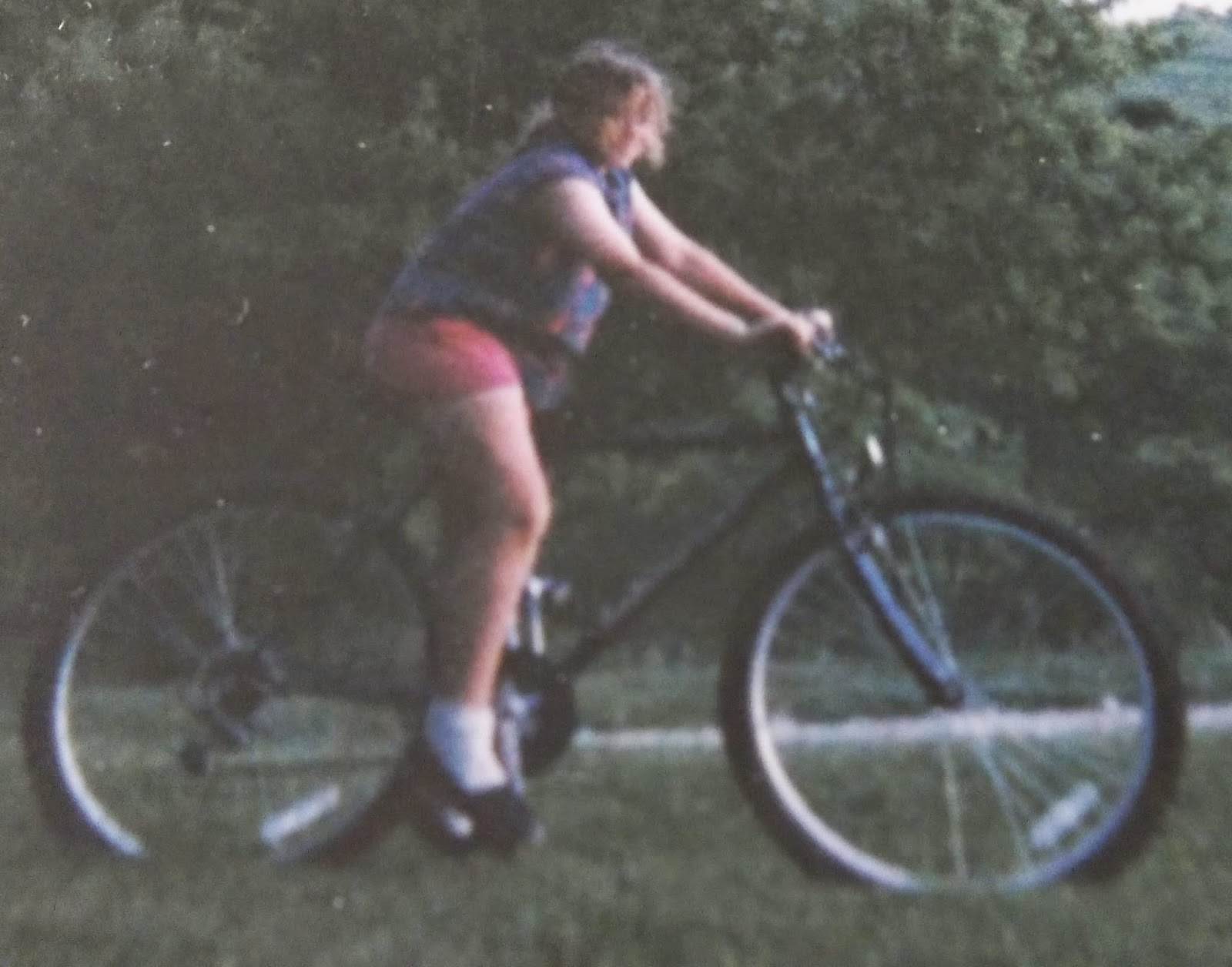 I was reading some stories the other day from Childhood-an issue from Elly Blue’s Taking The Lane Zine.
There were a couple stories that made me think about some of my childhood experiences on a bicycle.

It took me a very long time to decide I wanted to learn how to ride a bicycle and I’m not entirely sure if it came before or after my most embarrassing moment. I think it was around 3rd grade or so, I’m actually not entirely sure. I was in elementary school and they had some sort of bike riding test that day. If you passed the obstacle course and could use your hand signals, you were given a permit to ride your bike to school or maybe for riding in town as well. Either way, I lived 10 miles+ outside of town and it was not likely my mother would agree to let me ride alone on the road to town. I can’t remember if I even had a bike at that point. So this was very likely my first-ever experience on a bike.

I didn’t know how to ride.
I was, by definition, the oldest kid they probably had ever seen who didn’t know how to ride.
I lived on a gravel hill, in the middle of the boonies, miles away from town…what did they expect?
I was made to take the test.
I was probably in tears.
I was mortified.
I had never balanced myself on a bicycle before.
I was the only student to which the teacher had to hold the bike for.
I didn’t know about hand signals.
I didn’t pass. Obviously. 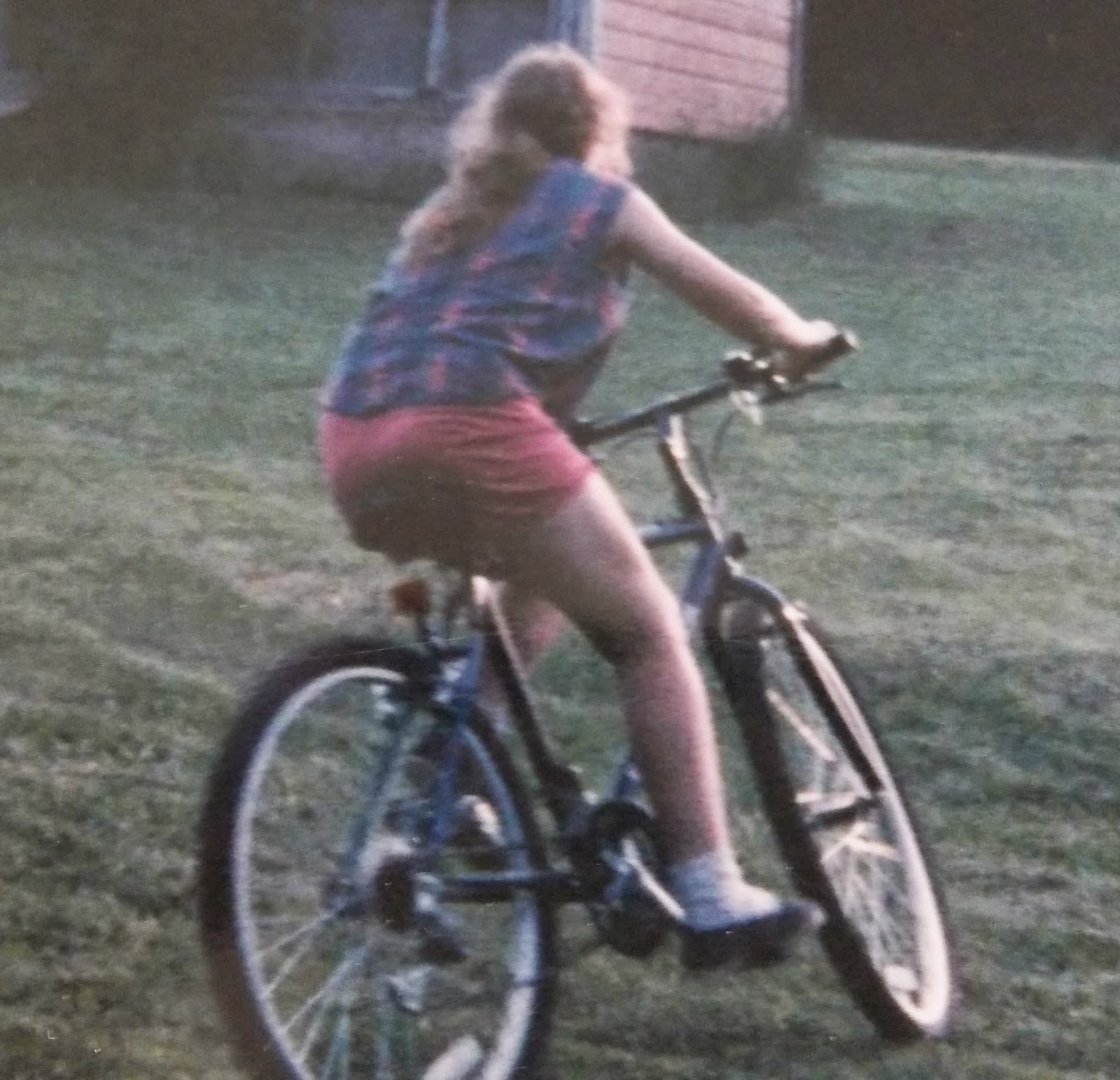 People were shocked. “Josie, you can’t ride a bike?” Well, duh! Does it look like I can? Where would I ride my bike? I live on gravel. I live on a hill. I live out of town.
It doesn’t surprise me that my love affair with the bicycle was delayed for years.

Eventually I had a little bike that my mom probably bought at a garage sale. I remember it had white grips and a white seat. It was light purple. We bought those handlebar pompoms for it and I remember I loved how it felt to run my hands in the streamers.

The driveway was where I learned and it was riddled with potholes. After a rain you’d have two large puddles on either side-so you would aim between them to stay dry. Sometimes when my mom and dad were doing chores up at the other farm (milked cows at my step-grandpa’s farm) she’d bring the bike up there and I could practice riding around that driveway. I’d do loops around the corn bin, ride past the pig pen area (where we ended up having calves after the pigs were sold.)
I rode on training wheels for a long time. I honestly can’t remember who decided to take them off-probably my mom. I was probably being picked on by my step-brother. I don’t know.

Eventually I outgrew that bike; I probably got another garage sale bike. I rode around that for awhile…my mom spray painted the bikes-we had matching red bikes with a black bands-however her bands were paint. Mine were simply taped on. I can’t remember how much I rode that bike….and why the hell I agreed to red and black.

Eventually I got a new mountain bike that my step-dad won from a drawing at a local gas station (that doesn’t exist anymore.) I was so excited! My step-brother didn’t care about riding a bicycle, so I got a new bike! It was so cool to me at the time-also it was way too big.
I managed to ride it around the yard, up/down the driveway, and thought I was the coolest thing since sliced bread. Eventually my mom and I went to Walmart, she thought it would be fun for us to ride bicycles together-we would go maybe once a week or so and ride down the hill to my grandma’s house.
While looking at the bicycles, she looked at me and said “What if I bought you a new bike and took the other bike?”

It was a big decision, but we both knew that it was too big for my body. I agreed and went about picking out a boy’s mountain bike that was blu and black. I was not interested in a “girly” bike.
We bought helmets that day too. I don’t think I had worn a helmet before then-and I had already had a small bicycle accident in the lower driveway. (I had hit a rut and threw myself off the bike. I remember I had a bunch of scrapes on my chest/hands.)

Our rides to Grandma’s house were few, as I was anything but a good sport about riding down the gravel hill. I also couldn’t ride back up the hill. I hated walking my bike up/down. I wasn’t proficient at shifting. I hated riding on the road because the cars scared me (people drive fast out on country roads.) I remember I had a tip-over into a ditch one day. Surprisingly that didn’t rattle me too much, but I was nervous about edges.

Eventually I stopped riding altogether. My mom didn’t ride anymore either. The bikes and helmets both collected dust.

It doesn’t surprise me that I had some issues with getting back on two wheels. When you basically get traumatized by your school and fellow students over the fact you do not know how to ride, it sticks with you. It was that nervousness and embarrassment that trickled into my head when I thought of riding again.

What if I made a fool of myself in front of others?
What if I fell?
I had to let all that go.
I am so glad I did.
That awkward, chubby kid who didn’t know how to ride a bicycle can ride not only on pavement, but on gravel, dirt, and even snow!

Sure, it would’ve been nice to have gotten involved with cycling a lot earlier in life and developed my love for it, but things probably do happen for a reason. I can say I’m a reformed bicycle-hater and help others who may have had similar negative experiences make peace with two wheels.