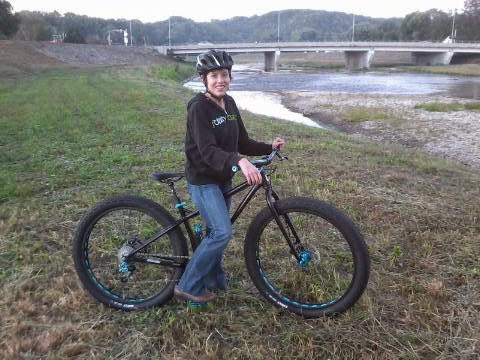 Progression. That is a word that I never expected myself to actually say when it came to mountain biking.

The photo to the left would be my first ride with Bruno. We went out near the prairie area near the nursing home where Travis used to live. We practiced riding up and down the banked area (nothing major) and I remember feeling anxious and nervous. The bike was big and something a bit more "monster truck" than I was used to riding.

I watched my Surly Krampus get built little by little, essentially I got to see Travis work his magic. I worried that I would completely suck at riding. I wouldn't be able to find my comfort zone on this bike. I wouldn't be able to maneuver into turns gracefully, let alone climb up hills. What if I broke it? Surely he knew that I would crash, tip over, or learn some "hard knock" lessons on this bike. 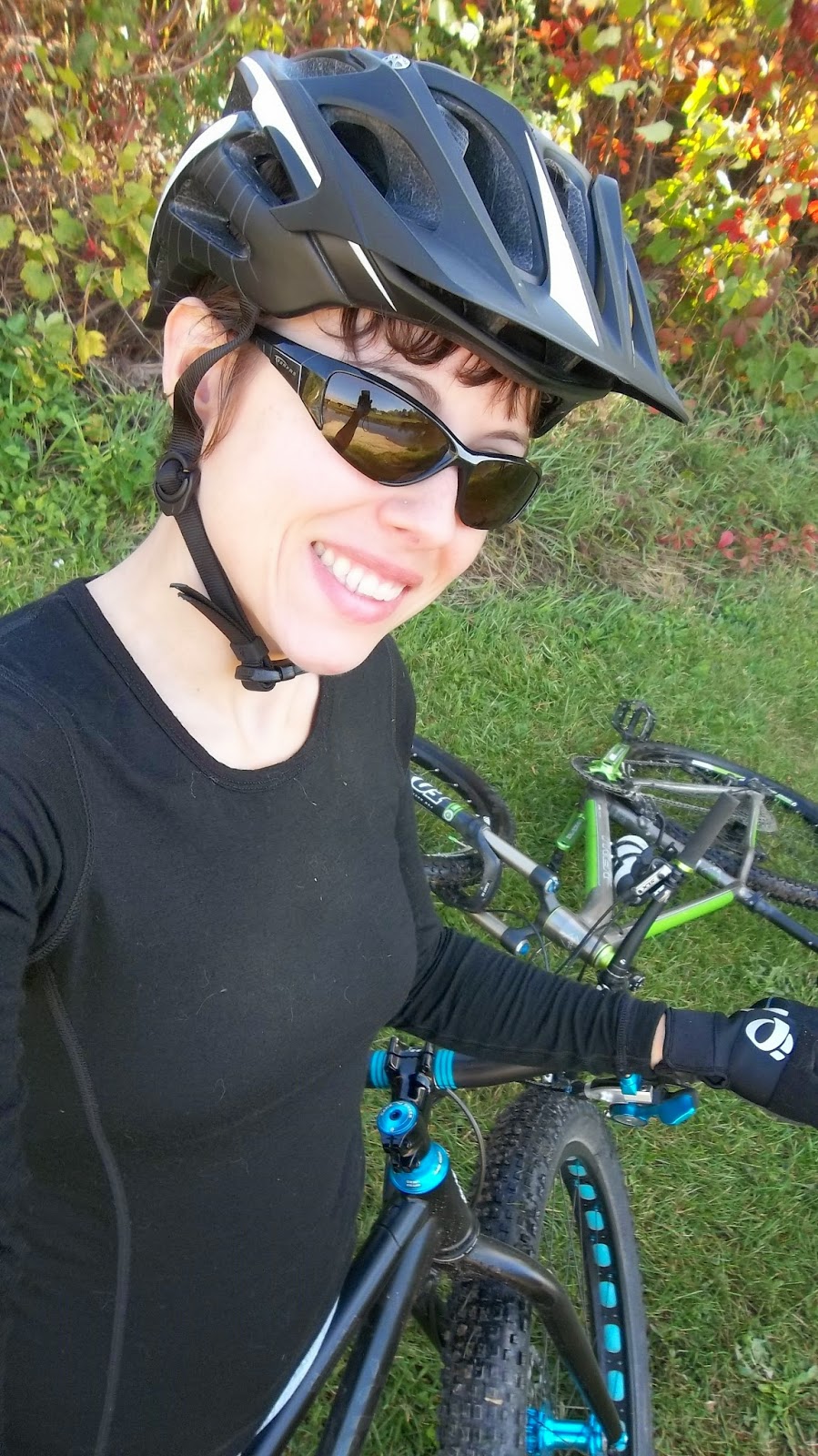 I'm pretty sure we went mountain biking only about 5 times last year. The picture to the right is what I took on the bank of River Trail. I was able to ride the flat parts, but to my knowledge I was not able to master any of the climbs. I remember Travis saying "Don't look to the right" when we rode right next to the river. Of course I was regaled with comments about people losing their balance and falling into the river. Great.

We would session going down the first hill as I kept using my back brake too much. Travis heard me skid, putting two and two together-I was made to go further and further back up the hill and ride down it with less and less brake action. It was a good lesson, but I remember feeling very nervous.
The second hill has a root in it that you have to avoid, essentially needle your tire through. You also have to come at it with speed-knowing it's there and going full force and lean into the climb. I remember I did not accomplish this hill at all last year.

When we came to the end of River Trail, you ride down a bank, through the river, onto a rock bed, and up another bank. I was told to not bother with the bank, as I might end up toppling over or forward or something. It was tricky for me at that point-but I was happy with my success of what I did accomplish. 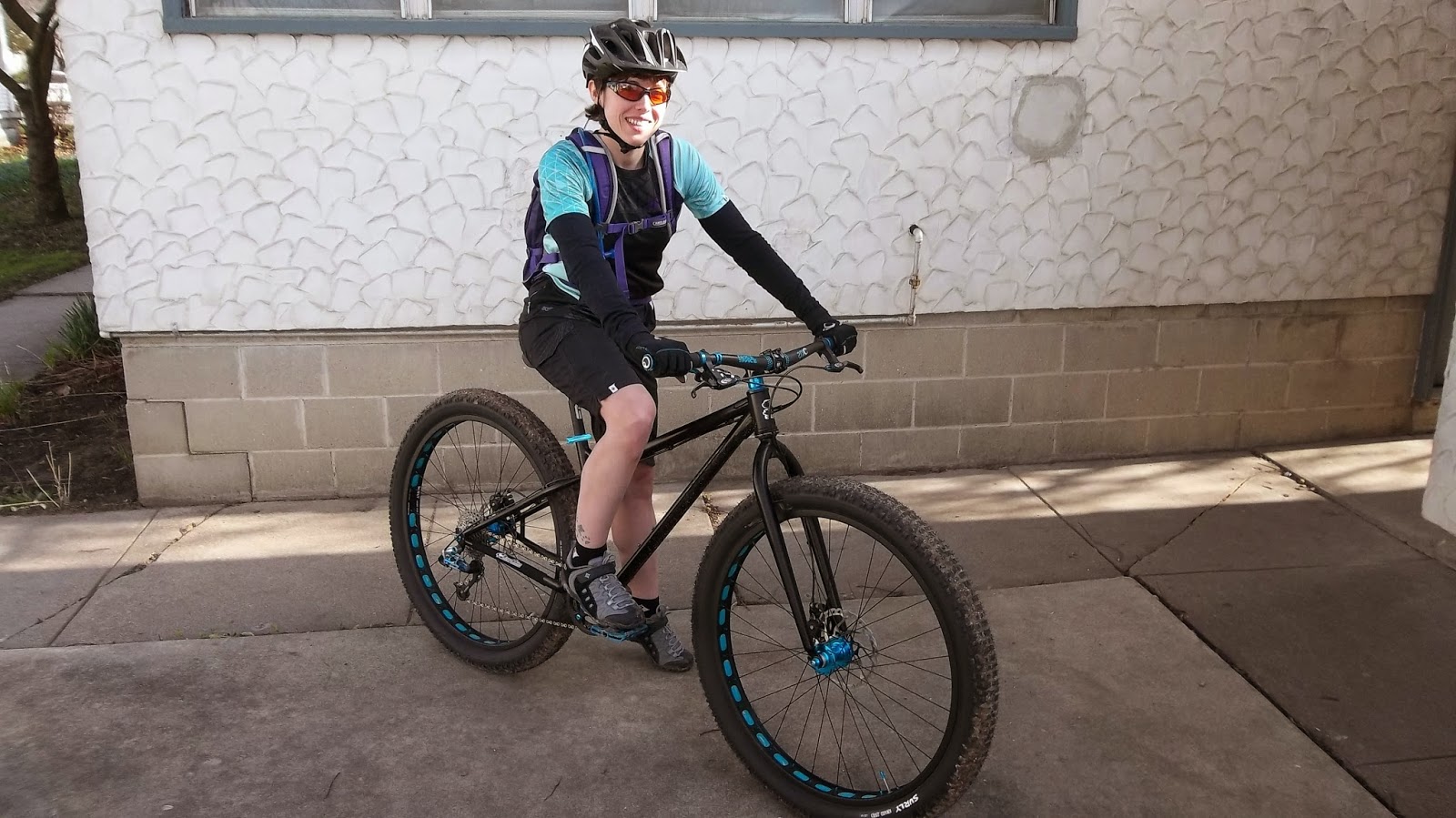 This photo is the first day I went mountain bike riding this year. I was completely nervous and apprehensive. Excited-yes, but it was pretty much completely new to me.

This year Travis decided on a perfect "beginner" trail for us to explore. This trail is called IPT (Iowa Public Television) and why? I'm not sure.

However it's a novel trail because there are some dead t.v.'s out on the trail. Not only that but a chair or two as well.

Another feature the trail has is the Pugsley Pit, where members of Surly Bikes come and camp out for the annual (or kinda annual) Dirt Burger event. Locals meet there as well for time trials and such. There is a log pile, a bin for your beer cans, and some flags hanging up between some trees. 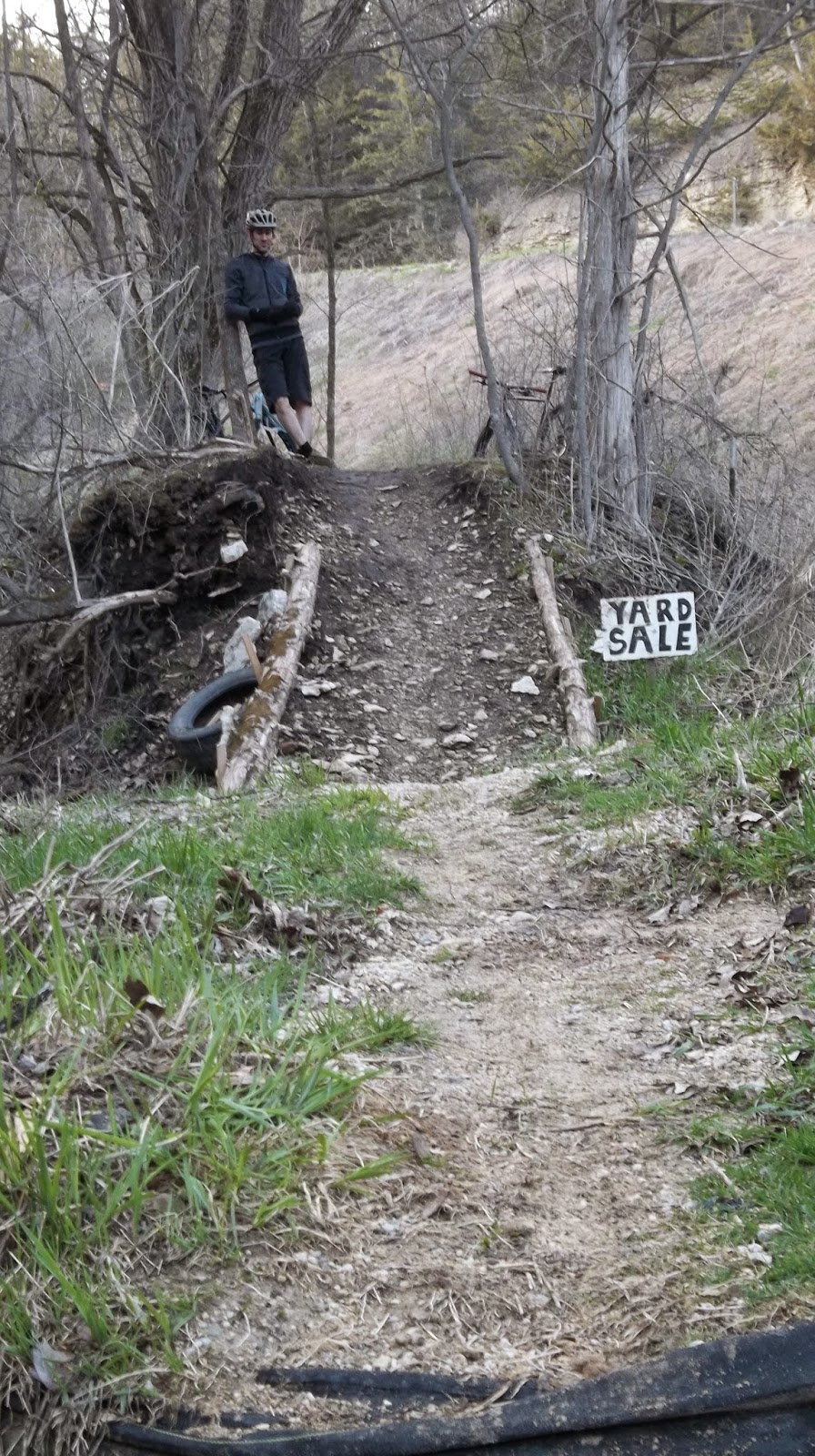 The trail is divided up into multiple sections, there is the original IPT and the "new" IPT. Basically you have two entrance points and can pick/choose. There are also additional splits in the trail that will either take you up a hill or along a rock garden. You can split again later to ride closer to Dust Bowl...it's really a multi-faceted trail.

Travis took me on the newer section first, which had me gain a lesson in lifting my front tire up and over this little man-made bank. What was my downfall on this day was a short (but steep) downhill that takes you down along a tricky rock garden that you have to poke through. I panicked this day, the downhill gave me flashbacks to my first bike biff (a fall on a little wooden bridge-I came down a steep hill and ultimately misguided my bike, overturned, and wiped out.)

Travis and I had a big head-butting session over this hill, looking back it was pretty stupid. However, we were also not seasoned with riding anything technical together, so it was a challenge. You can't become instantly compatible with teaching/learning/riding over 5 mountain bike rides. That simply doesn't happen.

After I walked down the hill, accepted my so-called "defeat" we kept on going. I wish I could tell you exactly where we went, I'm thinking we went up Gunnar which scared the crap out of me. You look down over the side and can see other trails below. It's cool, but for someone that isn't a fan of heights, it's very much a deterrent.

Then there is a tricky spot where you have to ride up and around some tree roots. I honestly can't remember if I got it the first time or not (my rides, without looking at past posts written for Imagine Northeast Iowa are blurry!) 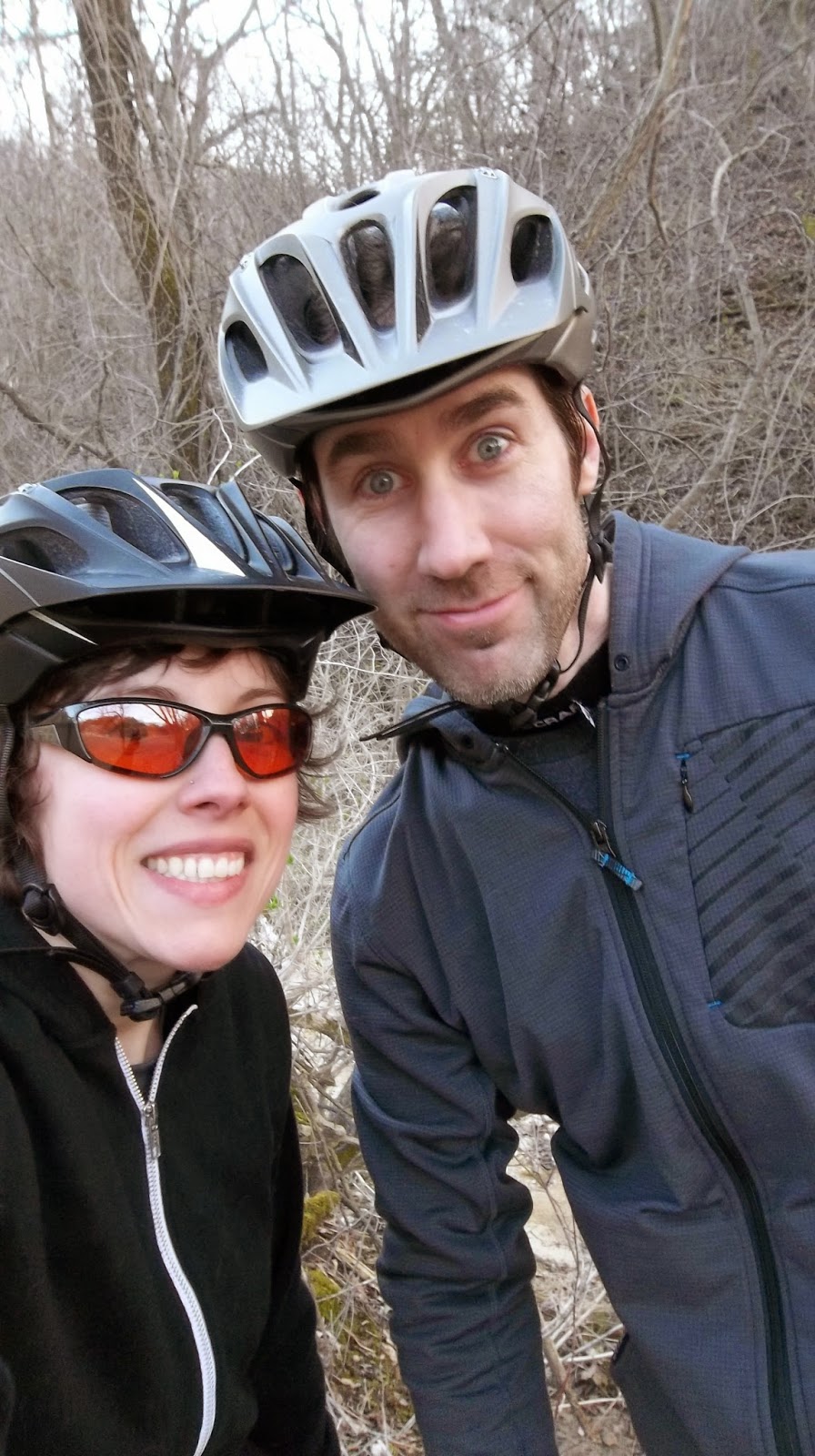 It's really amazing to sit here and recall some of my first mountain bike moments. I didn't feel confident at all when I got on my mountain bike last year and during the first few months this year. I felt more apprehensive about riding than excited; now I prefer to ride the mountain bike trails vs. the paved trail.

If you had asked me in 2012 if I'd say that, I would've told you that you were absolutely nuts.