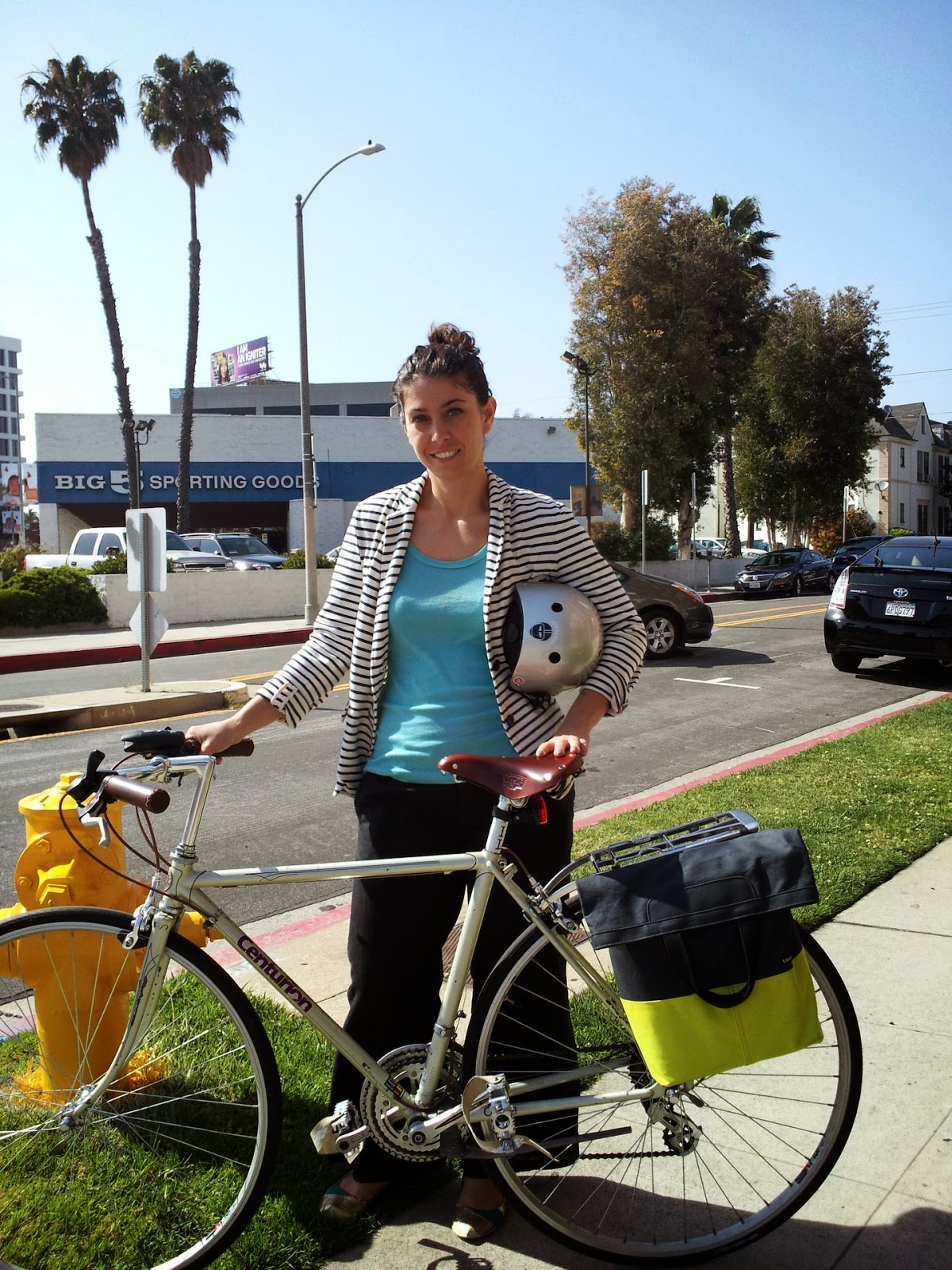 When did you first start riding a bike?
I learned how to ride a bike at age 30. I have set it as a new year’s resolution every year for a decade and finally, when I turned 30, I thought it was no better time to tackle it head-on. I took a class at REI to learn to ride in December, just in the nick of time!

What motivated you to ride as much as you have over the years?
It began as simply as the feeling of being a kid with the wind in your hair and a smile on your face around the blocks of my neighborhood. Then I was empowered to use the bicycle as a replacement for my car for errands and commuting. Then the empowering sense of capability and strength inspired me to climb the biggest mountains and race the fastest I possibly can. Now you can’t imagine how grouchy I get when I DON’T get to ride my bike!

Have you competed in events? If so, what were your reasons for competing?
I began racing a year ago, so two years after learning how to ride. The feeling that my own two feet can pedal me to great speed and strength opened up the world of racing. I don’t race to win, in fact I don’t win, but the challenge to find my limits and go beyond them is exhilarating.

What would be your favorite competitive biking event?
I like road races more than crit races. I haven’t tried mtn biking or cyclocross…yet. Criterium races (crit races) are short, fast, flat races on courses less than a mile a lap. They can be fast from beginning to end and the other racers are close to you. Road racing, however, can incorporate elevation changes and speed changes based on topography and the other riders’ skills, which to me is more exciting that racing around four corner. The burn in your legs makes you feel so alive!

What advice would you give someone who is just starting to compete?

Do not be afraid to talk to other Women in your category. It's OK not to know something. NO ONE was born racing. Don't let anyone intimidate you. Seek out clinics, kind fellow racers to ride with and answer your questions, and read plenty of race reports (summaries of races that riders will post) both for your upcoming races and the pro women racing in Europe. You'll learn language and tricks and get familiar with a course.

What kind of riding is your favorite? (paved, gravel, mountain, etc.)
I never expected to like climbing mountains on paved roads. Does anyone? I do it for that feeling you get when you reach the top. I JUST DID THIS! (insert instagram picture here) THAT is addictive and worth all the singing and promises of milkshakes to get my butt up there!

Do you remember how you felt on your first mountain bike ride? (If not a mountain biker, how about first commuter ride, paved trail ride, gravel, etc.)
Oh man! I remember the first time I commuted to work. My distance is 10 miles one way, which is daunting. But I was determined! It took me almost two hours and I stopped at corners at least four times. I had to call work to tell them I was going to be late but that I was OK! I was embarrassed but still proud of myself. 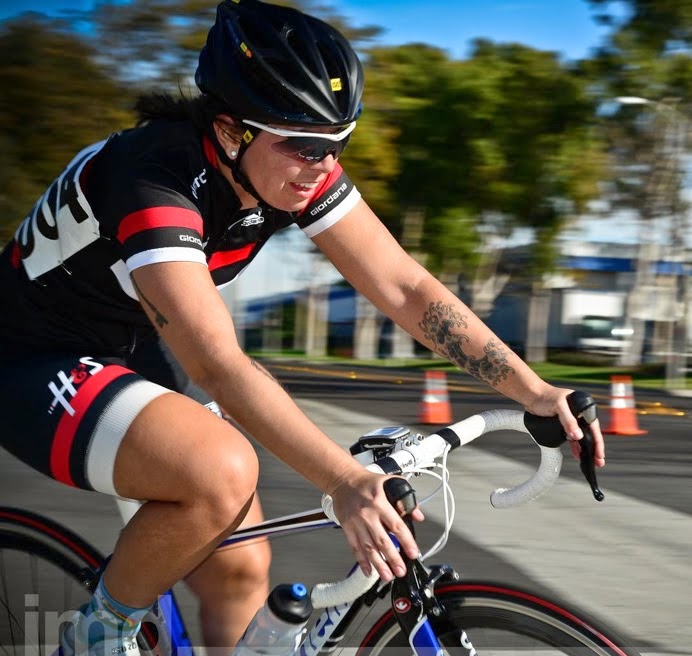 If you had nervousness at all, what do you do or think to overcome it?
A fellow racer in my category once told me, “If you’re nervous, then that means you think you have a shot at winning.” I truly believe that if you are nervous, you are LIVING. You have every right to be riding, every right to take the lane, every chance of winning a race as anyone else there. Nerves are good when you turn them to pedal power.

Do you use clipless pedals? If yes, what are some tips/suggestions for beginners that you would share? If no, are you thinking of trying it out at all?
Be prepared to fall! Oh boy did I take so many spills my first 6 months of riding clipless. I still only do it on my training and racing bikes, not my commuting/fun bikes. It’s something worth experiencing but you are not missing out on any biking experiences if you decide not to do it. My best tip is to unclip way before a light or an upcoming stop in order to avoid a panic or a fall-over.

If you are a commuter what are some of the challenges you face and how do you overcome them?
Living in Los Angeles, which many people perceive as the car city of the USA, you’d think we’d have a tough time on the roads alongside drivers. Yes, I get my fair share of shouts and honks, but the sins of one driver does not, in my mind, carry to every driver so I do not ride aggressively or angrily. And I believe drivers respond to that. I’ve learned to give a wave at a honk instead of a middle finger. Hey, now I know they see me!

Do you commute even if the weather isn’t ideal? Why or why not? If yes, what do you do to make it more tolerable?
I decide that day. Oftentimes, I go multi-modal – bike to work in the morning but bus or train back home. Riding in the dark and in bad weather can spook me, so I am not apologetic if I decide to use my car.

Have you had a bike biff? If so, how did you recover on a physical/mental/emotional level?
You can imagine that as my riding has accelerated on numerous levels in the past three years, so have the accidents. Most recently, in a race this past February I crashed and smashed my collarbone to pieces, requiring surgery to install a plate and screws. It most certainly has shaken me. It affects work life, social life and my confidence to ride again. After the toughest weeks, and I let myself get through some tears, I came back to the realization that the bike gives me more than it takes and I can’t live without it.
What do you love about riding your bike?
I am woman on my bike and hear me ROAR!

What advice would you give someone who is just starting to commute?
Give yourself plenty of time the first week! And route a few different options. Make sure to set up your office space with an extra shirt, underwear, deodorant, brush, makeup bag - things you think you might need if you were to imagine working outside on a very hot day. You'll begin to figure out more of the products and extras you'll need but those are simple basics. Oh! And of course, drive or walk the route you first choose BEFORE you ride it. This gives you the chance to spot any tough spots along the way.

How many bikes do you have? What are their stories?
I have 5 bikes in the arsenal now. The Centurion was the first bike I learned to ride and the fit was simply all wrong. I've come so far in my learning since then! Next up is my baby blue Bianchi Imola - or BB as I call her. This bike was the launch of my love of cycling. I could glide on roads, climb up hills never before attempted, and this bike actually became my first racing bike. I'm outfitting it to be an excellent touring and commuter bike.
Then I bought a fixed gear Fuji for track racing. I love going to the velodrome and really feel like the connection between my body's own power output and the bike's movement are no better felt than on a fixed gear bike. My skills have greatly improved since riding it.

I'm also a volunteer at a bike co-op so as my mechanical skills have improved so has the desire to build my own bike. I found a vintage Peugeot mixte on craigslist and restored it over 6 months to its true beauty. It's a heavy bike but the bestest upright bike, the one you would picture riding on a country road with your hair whipping in the wind and the sun on your face. Her name is Frenchy, mostly because learning to fix a French bike could sometimes bring me to tears.

Finally, I bought a carbon Cinelli Saetta for racing and training. Turns out this is the bike that feels most like an extension of myself. Every sound, every limit, every angle, everything about it is like it was custom to me. I honestly never knew a bike could feel so perfect.

What is one thing about you that not many people know that you find interesting (doesn't have to be bike related)
I have an unhealthy obsession with Nutella. Seriously! Before a race I can stuff up to 5 pieces of toast coated in Nutella :)