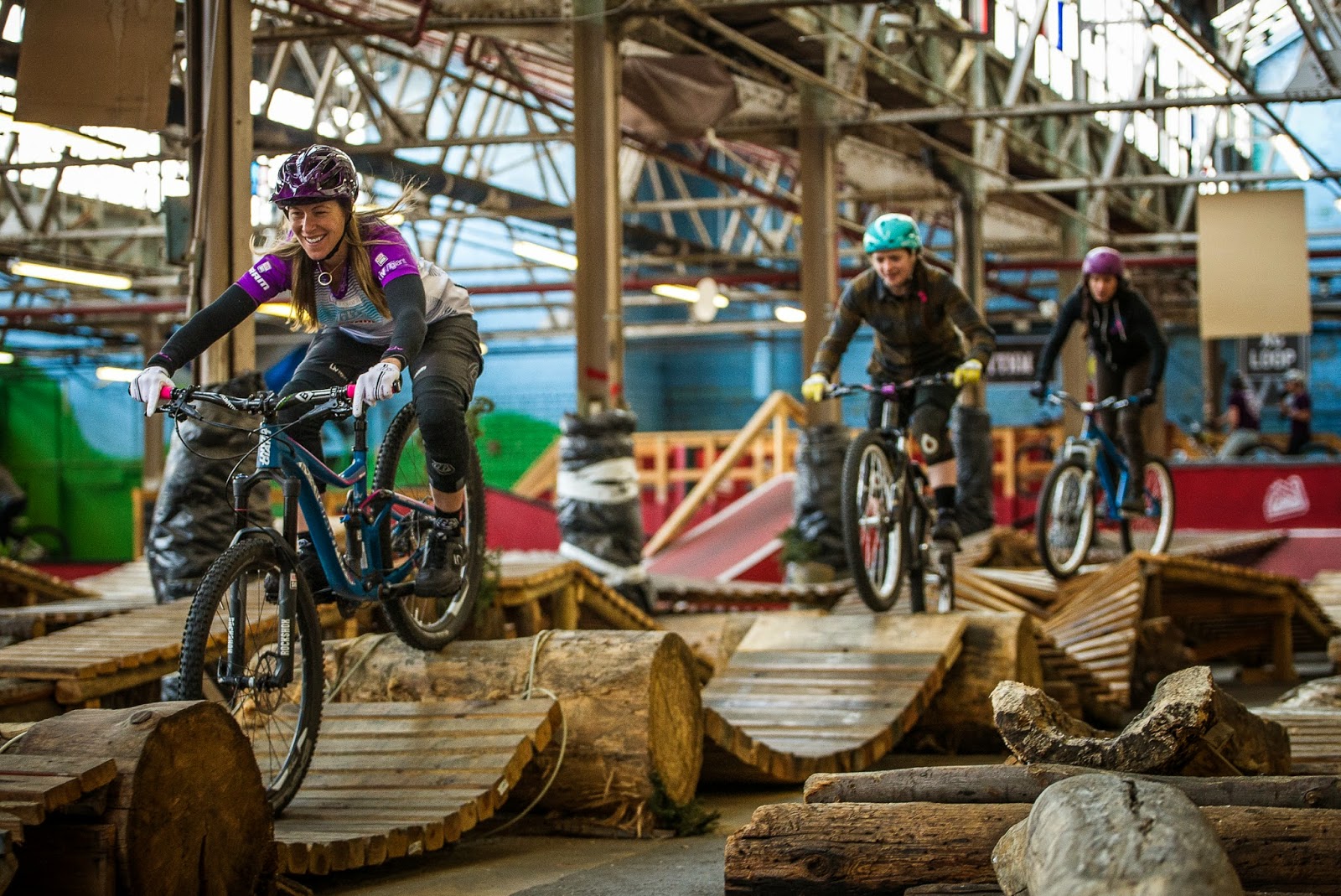 A few weeks ago while on Facebook I saw an article posted by Bicycle Retailer Magazine talking of Leigh Donovan starting a mountain bike skills clinic.

I was intrigued and figured "Why not?" So I sent Leigh an email inquiring if she'd like to participate with my blog interviews.

What inspired you to start a mtb clinic?
I am involved with an executive women's of cycling group and on a retreat in March of 2013 the ladies reminded me how much I love teaching and educating women about riding, racing, and the industry and since we need to even the scale out a bit more and if you're a single woman you can't beat the chances you'll have at the bike races/events!

What were some personal goals you set out for yourself? Have they been realized? Still working on them?
When I started racing bikes I was young and truth is I didn't really even know what goals were. Once I started racing, I caught on fast to what a goal was and I liked the idea of setting one. My first goal was to jump this 25 foot set of doubles on my 20" BMX bike (if you don't know bike lingo, it's two bumps and you hit the first bump, fly in the air 25 feet and land on the next bump), I crashed a lot of times but when I finally made the jump I became a more confident rider. Since then (that was in 1985), I have set many goals and achieved most of them...one I never did achieve was World Cup Downhill champion, but in its place I won the World Cup Dual championships (which wasn't on my goal sheet, lol). Today some of my goals are to get through a day without fighting with my daughter or to not say a curse word in front of her...simple goals but harder than winning some of those races back in the day.

What are you hoping for the future?
Currently ichoosebikes.com is in its infant stage. I just launched the business this year and have 3 major women's events along with a slew of smaller ones. The goal for the next 5 years is to add 1 major event a year, so in 5 years I'll have 8 major women's weekends and will hopefully see the bike industry more balanced with males and females enjoying their bike.

What do you feel keeps more women from mountain biking (or biking in general?) Equipment? Mental/Emotional?
Many of the women I speak with say they don't mountain bike because they are afraid of getting hurt. I believe there is more to it than just fear though. For starters, women in general don't like to sweat, get dirty, and worst they hate helmets. The fashion of cycling isn't as appealing as let’s say yoga or cross fit either, where you can put on your cute little outfit and tennis shoes. And we can't ignore that it's hard at first, which is why so many people (men or women) quit after only a few rides because it takes a lot of fitness, finesse, and frequency to enjoy it. I've found when I stop riding for a few weeks that it's hard to get back in the habit of it but once I do, I can't believe I don't ride every day. I hope ichoosebikes will help change the statics in the future and we'll see loads of ladies on the trails!!!

A topic that I’m finding that comes up quite a bit is the fact that I am a woman and I am “so different” with learning than a man is. The finger-pointing line “you’re a typical girl” comes up. So I’d love to know from another woman’s opinion: Why does it seem women learn differently and react differently than men do when learning the same thing?
In my opinion, women have been held back for centuries, being told often they are weaker, slower, dumber, and in some countries even today treated as second class citizens. It's no wonder women learn differently since they've been told most of their life "you can't" or "you're just a girl."
I think on the other hand, men have been told to suck it up, be tough and many boys are still being raised like that even today, which is why women are insecure and have a hard time handling the pressure of being on public display learning in front of a group and men are totally the opposite, they generally will just go for it because most men have never been told they can't!

What are some ways that both genders can find acceptance with that?
Both genders should be able to see the difference and if they don't then maybe that person isn't really paying attention. Men have held the keys for a long time and in another century things will be very different and I believe both genders are seeing this today. One thing I see a lot is dads dropping their kids off at school and picking them up, which is very different from when I was in school. Things are changing on the trails and in our lives all the time now. 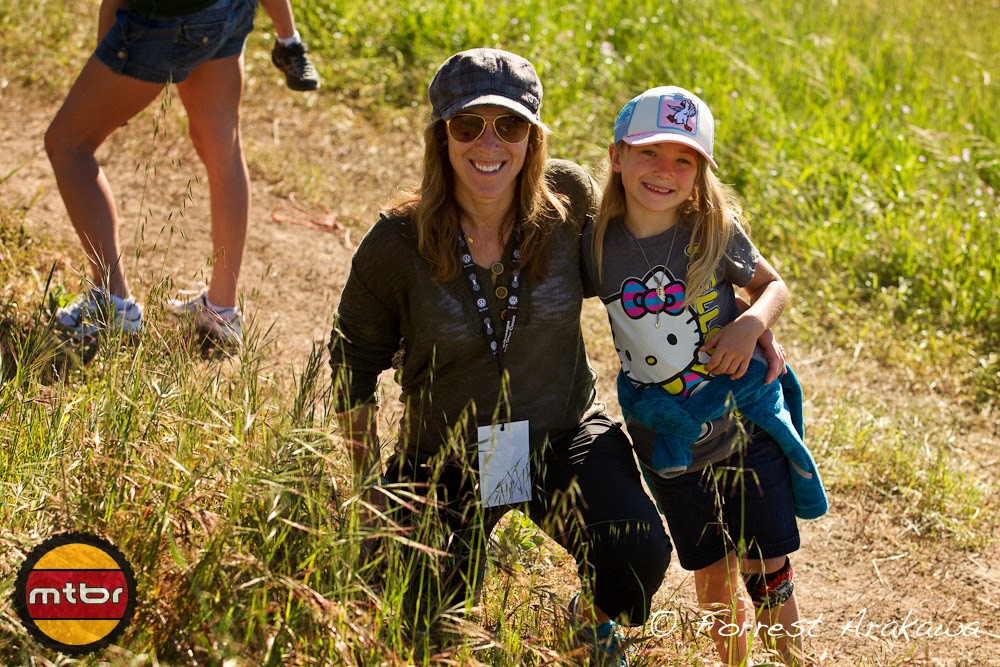 What inspires you to help women learn and enjoy the mountain bike experience?
I love seeing the smiles and the first time someone does something they never imagined they'd do. Teaching is such a huge reward and teaching people how to ride mountain bikes is both rewarding a super fun! Women are amazing and after spending most of my life having mainly male friendships, I love the support of the females in my life and awesome friendships I have gained through this new business.

What advice would you give to someone wanting to become an advocate for mountain biking in their area?
I'd suggest you get certified with PMBI or IMBA. They can give you the tools and knowledge to help educate and inspire the next generation of riders!

What are tips and suggestions you would give to a woman who is contemplating on giving mountain biking a shot?
Just do it, ride a flat bike path on it until you're ready for dirt. When you go on the dirt, ride something easy. Ask the local bike shops if they have a women's club (that is really popular these days) and join it if you find one. If you feel like you're missing something in your life and you want to enhance your mind, body, and soul...give it a shot, and remember it's not easy but nothing worth having ever is!

What would you like others to know about mountain biking and why it’s such a great recreational activity?
I love the outdoors and riding in the mountains just gets me farther and I get the chance to experience more it. The people are generally fantastic human beings which is probably why I came back to the industry after a 10 year leave of absence to own and operate a women's clothing boutique (fashion is my other passion).

Tell us a random fact about yourself that people may or may not know
I love clothes, fashion, and specialty furniture, so I opened up a clothing boutique when I retired from racing back in 2002 (after spending almost 20 years racing my bike). The store was named Tangerine and it was open for 8 years. I was able to live my dream of dressing up in high heels everyday to go to work, wear makeup, and dresses. After we closed I was excited to through on my tennis shoes again, wear my flip flops and join the millions of women who dress casually on a daily basis. I do miss the excitement retail brought into my life, the chance to see what was going to be in the stores WAY before anyone else, and the opportunity to help women look their best, but now with ichoosebikes.com I have the chance to change women's lives and help them make a lifelong hobby out of cycling. Thank you for reading!