Lessons in Mountain Biking- Try it With Friends vol. 2


Enter Steph, whom I've met and conversed with for a few years now while working at the Co-Op. I didn't even know she biked until last winter when Travis mentioned that she and another friend had rented fatbikes to ride (up in the pines.) and I thought that was really neat! Other women were trying out fatbikes to go out and recreate in the snow based off my blogging experiences. (Also, from being a conversation piece at the shop to motivate other women.)

I told Travis awhile ago to tell other women who seem to be bike-curious, I'll go riding with them if they would like some support or company.

Steph stops at the shop and is inquiring about mountain bikes, Travis offers me up as a riding buddy-this is where I feel nervous! Because of my blogging and such, I worry that I'm looked at too quickly as a "professional rider" which I am far from. I write about my experiences and lessons, and if you were to read I am honest and keep it real. I admit when I fall, scrap my knee, or otherwise bruise myself. So I'm always slightly nervous-I'm not anyone to idolize, just someone to ride with. 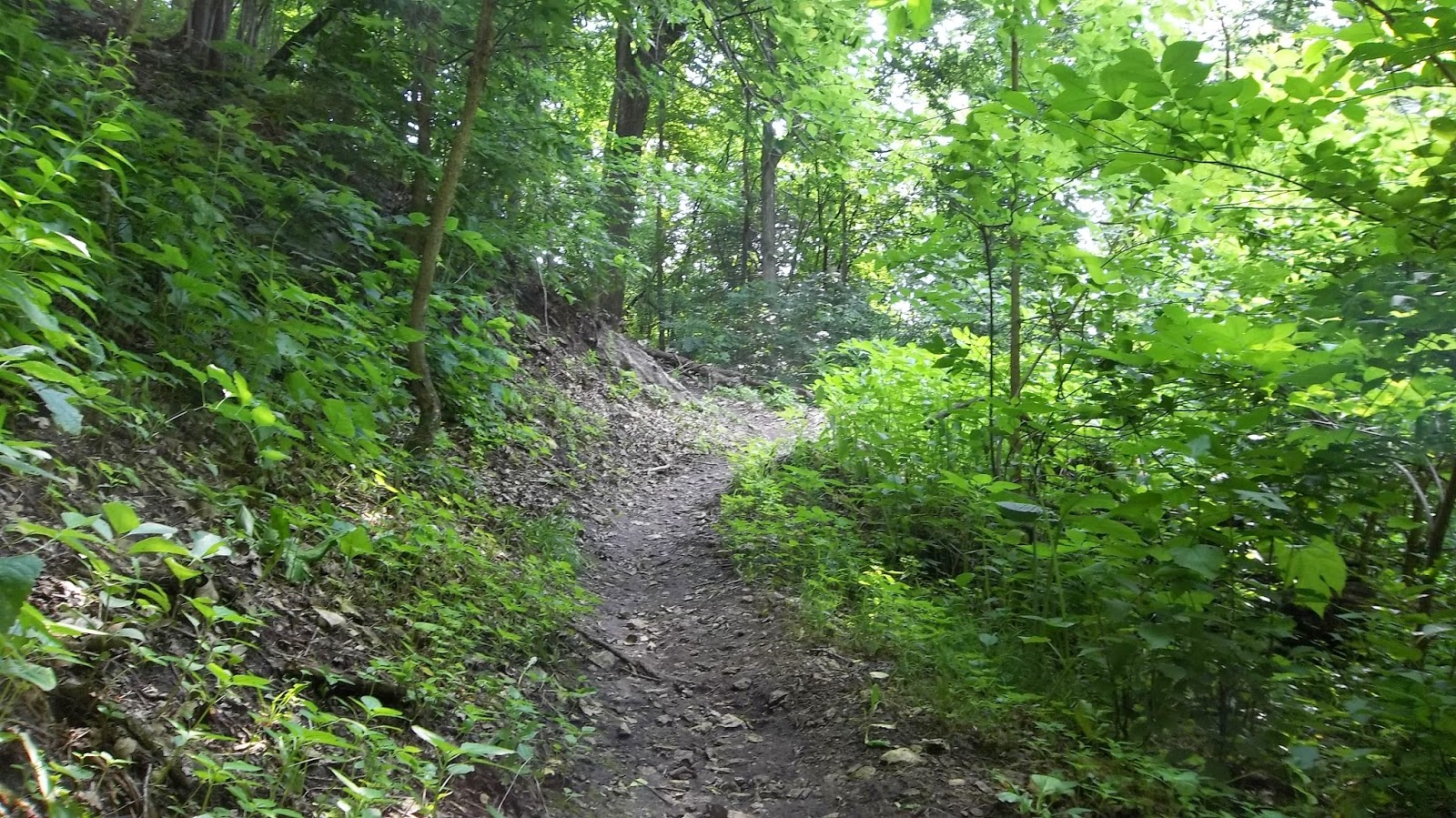 Steph and I communicated and set up plans to go riding on Saturday, a glorious day with low humidity but increasing warmth. She had already gone out on Thursday to explore, Travis had informed her of some trails to avoid, and she had a great time. Very much like me, the whole concept of how the trails connect was something she wanted to learn. It's pretty easy to get confused to where you are at and map reading is not my forte.
I pre-planned a route that I was comfortable with that would give Steph a great ride and help her learn trail connections.

We started off on IPT, taking her on the route I regularly go on and we went to North 40 after. North 40 still challenges me with two climbs at the very beginning, but walking a short ways is worth the fun and excitement after! We came to the hairpin downhill and I went first, then I had Steph stand off to the side while I did the downhill turn again for her. A second visual if you will, so you can see someone head-on/sideways vs. simply from behind. I talked of when I sat back to when I sat back further; Steph decided to try it herself and successfully accomplished the downhill her first time! I gave some other basic pointers (feather the brakes vs. using one more than the other/locking up) and the steepness of declines equaling how far back you stand over your seat.

We continued onto Gunnar, taking a detour on Julia-we went the way that would have a few more climbs to it (took the upper entrance.) I felt more comfortable with Julia today than yesterday, not hitting my handlebar when riding between two trees this time. Small successes!

When we came up and out of Gunnar we had the question of "What should we do next?" I had originally thought of going on Little Big Horn to Dust Bowl, but Steph was curious about Fred's. Well, in that case, a challenge must be accepted! So I altered our Little Big Horn route so we would ride it in reverse (and come back up to the pines.)

I had a first on Little Big Horn, after one of the U-shaped up/downhill there was a rotted log that had been replaced. A couple feet after is a new log pile as well. I had felt intimidated by these two new features since they were implemented and had studied them each time. Both of the new features were designed so you could simply ride over them (at least, that's what I concluded) but the first time I tried the log I tipped over to the left of it. This time, I decided that I would give it a shot and both Steph and I accomplished the log and stack! I was excited! The level of "badassery" I felt was pretty dang high.

After Little Big Horn we did two pine loops before heading to Fred's. We poked along, needling our way around roots/rocks. Then to the downhill that would provide a generous dose of nervousness; accomplishing the downhill is definitely a rush. I made my way down and waited at the bottom and got to watch Steph maneuver around the turn and successfully make her way down the hill-her first time on Fred's! It was awesome to see another woman out there accomplishing dirt goals.

To end the ride I took Steph on the Luge, which is always a fun finisher for the trail riding of the day.

All in all, I would say the ride was a great success and there is another woman out there who is interested enough in mountain bike riding to sneak out on her own. It's something I can relate to and admire; being out in nature, the challenge, and feeling confident enough to say "I can do this." It's also nice to ride with another person who thinks along the same lines you do-both of us are contentious of what we choose to do in terms of challenging ourselves; our bodies are our livelihood-so there is mutual appreciation over not pushing each other out of our comfort zones (but pushing just enough to have a grand time!)

It's always interesting for me, usually being a follower, to be a leader when I go out with a female friend. Certainly not an expert by any means, but having figured out how to make my way around the trails and knowing obstacles-falling into the roll of the leader is something that isn't as unnatural as I thought it would be.