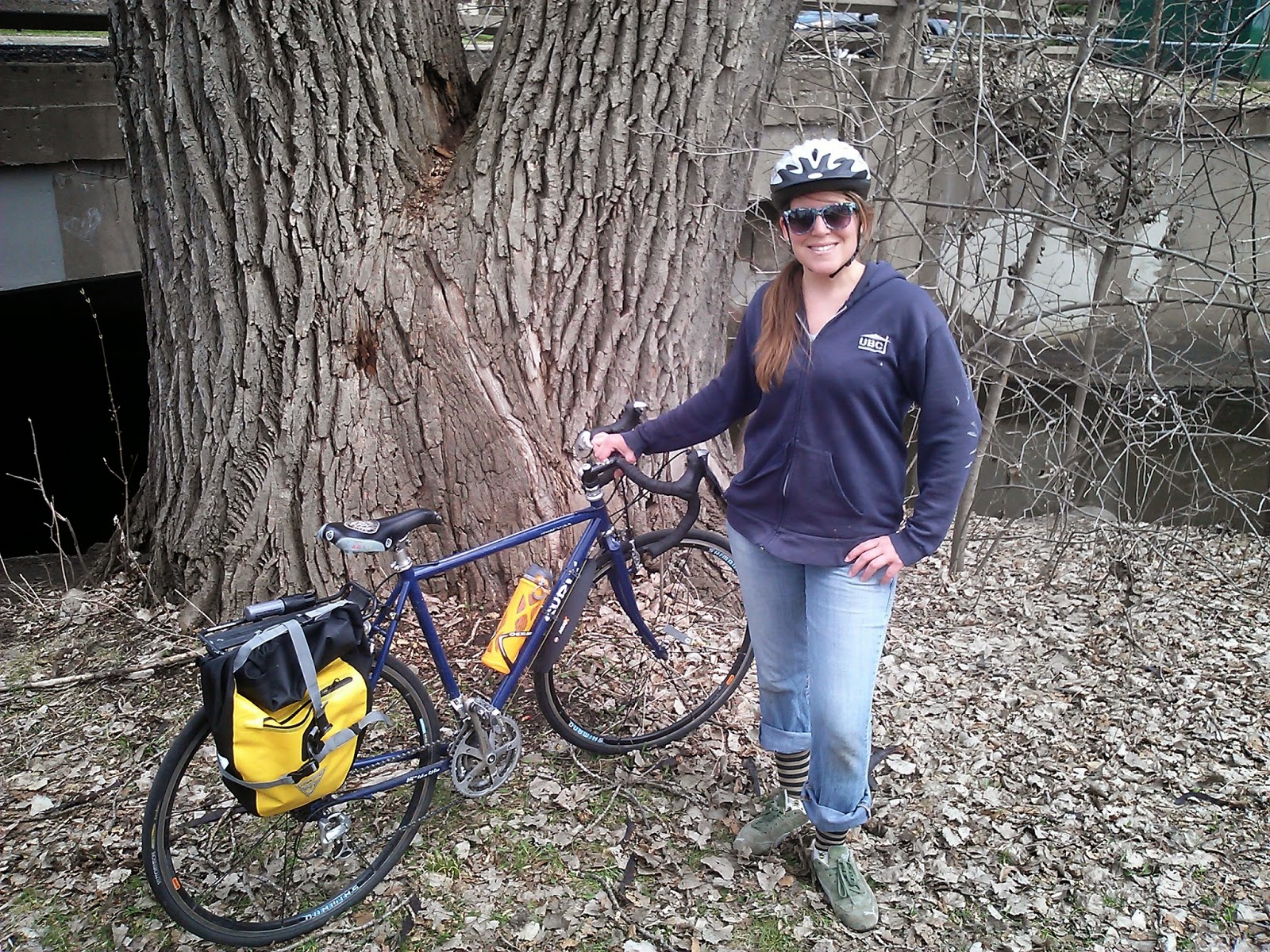 Back in April I contacted Grease Rag about interviews, Holly and was just starting to get involved with the community.
Her introduction was honest and I felt that many other women would be able to relate: “Although I don't own a bit of spandex, rode a $50 bike for over 10 years, and don't consider myself an avid cyclist... I moved to MPLS about two years ago because I was seeking the sort of community that G.R. offers.  I guess I might be becoming an avid cyclist!”


When did you first start riding a bike?
7 or 8 years old…after all my friends…

What motivated you to ride as much as you have over the years?
Health and environmental concerns are two things that are usually on my mind. Biking seems like a relatively easy way to stay healthy (you won’t catch me at a gym) and it obviously impacts the amount of fuel I use. There’s also a social lure to biking…the bike community in Minneapolis/St. Paul hosts a lot of fun activities.  I meet a lot of like minded people there.

I'm not a group-fitness sort of person so you won't see me at a gym either! I find I like riding my bike because it doesn't feel like "working out" or "exercise". Would this be similar to you?

Yes - 100%. By bike commuting, I've been able to utilize commute time as exercise time. Two birds, one stone. (Hint:  I'm actually quite lazy and can't be bothered with the responsibility of regularly going to a gym.)

What kind of riding is your favorite? (paved, gravel, mountain, etc.)
Paved…and, with the right tires, a fresh snow on pavement!

Riding on pavement after a fresh snow fall has a different set of rules and a unique pay-out. I love how my tires roll silently through the fresh snow, allowing me to hear the sound of birds and other small things that noisy/crunching footsteps would drown out. At any moment in this enjoyment, I could find myself battling with my back tire as it fishtails and my front tire as it spins around with no traction. The juxtaposition amuses me and makes for a really exciting ride.
Once the snow has been pushed around, packed down, or you're in traffic - the experience is totally different. I switch into survival mode and it's not nearly as much fun.

Do you remember how you felt on your first mountain bike ride? (If not a mountain biker, how about first commuter ride, paved trail ride, gravel, etc.)
I remember how I felt on my first bike tour and camping trip…we had scouted out a route that we thought was along a cycling path but ended up being an ATV trail. The trail had VERY loose gravel, I didn’t get enough sleep or hydration, we had a late start, we were FAR behind schedule, cycling in the most intense heat of the day, and I was carrying too much weight.  Two hours and 10 miles into it, we turned off the path and onto the roadway. Wow…I learned more about bike touring in those first two hours than I have in the 4 years since…

If you had nervousness at all, what do you do or think to overcome it?
I am nervous about cycling in traffic. Something that’s been essential in overcoming that is a mirror. Just peeking down and seeing the approaching car veer slightly away gives me the assurance that they see me and are giving proper space. It also helps to avoid collisions with inconsiderate cyclists who don’t warn you before attempting to pass too close.

If you are a commuter what are some of the challenges you face and how do you overcome them?
Having everything you need at work, but not packing so much that your ride is burdened down with too much weight. Finding space to change at work and store your gear. Sweat, smells, messy hair, wrinkled clothes…things that could affect your untarnished work reputation. Oh crap – I forgot [something] at home! Do I have to run an errand after work, or attend an appointment during the day?…These challenges mostly involve planning. So, whenever I’ve started a new job, I drove the first few times, biked here and there, until I had eventually built a plan for daily commuting. Trying to figure it all out the first time never seems to work. I’m constantly adjusting, improving. If I ever decide to drive because something out of the ordinary comes up (or, I just don’t feel like it), I don’t guilt myself for not cycling. I’ve learned to celebrate my victories, rather than worry about an end-goal or imaginary standard of cyclist.

What would be 5 accessory/gear suggestions you would give first-time commuters?

A mirror; a good set of lights; a rack with either bungees or panniers; your change of clothes for work; light gloves; a snack (for emergencies - I carry around a salted nut roll, just in case I'm suddenly famished).

What would be some tips/suggestions for people to establish their route to work?
I would suggest scouting a few routes ahead of time (actually riding it to/from work) to see what it's like. Think about safety, traffic flow, weather (wind, shelter, safety), and the differences at the times of day you'll be riding...pick your favorite one and give it a go!  Give yourself extra time, pay attention  to your surroundings, and be prepared to adjust a million things a million times.  Find co-workers who bike commute!

Do you commute even if the weather isn’t ideal? Why or why not? If yes, what do you do to make it more tolerable?
I like to cycle in all weather and actually enjoy the variations.  When I’m cycling regularly, the extreme temperature changes seem to be less shocking, as if I’ve acclimated my body according to the changing seasons. My picture of what’s happening around me becomes much more rich in description and variation…I hear different bird sounds, catch beautiful settings after a fresh snow, smell the changing seasons after a rain, and soak in Vitamin D (it reminds me of the beach!). When I wasn’t bike commuting, I tended to simplify the seasons according to my discomforts: “I’m hot”, “I’m cold”, “it’s crappy outside, I should stay in”.
Of course this is an ideal picture…I have rough rides and occasionally opt to drive. But, it’s pretty awesome when you DO ride to work in a snowstorm and stumble into the office looking like a yeti…especially if you beat the drivers there and can compare your daredevil ride to the typical drone of “I had to shovel myself out at X a.m. this morning”…

What do you love about riding your bike?
Two thoughts come to mind:
I remember when I was a kid and I had the revelation that I could go ANYWHERE on my bike.  Everything that was impossible to get to on foot and anywhere I wouldn’t go to on a typical day was suddenly right in front of me. The world seemed to expand as I pedaled past the edges of my typical stomping grounds. Almost 30 years later and I’m still convinced that I can go anywhere on my bike…

The other thought was shared with me from a cross country cyclist who encouraged me to make my first long bike trip. He rode up to my house, cracked a beer, and sat with me as we got to know one another on my front porch, watching the sunset. Between chain-smoking cigarettes and wild stories of his travels around the world, he explained with grand hand gestures and heavy French accent that “time takes on new meaning on a bicycle – it is changed - it is tactile – you can touch it”. I think of this a lot, he was right.

My bike:
I only recently upgraded to a Surly Cross-check that I found for quite the deal on Craigslist, it has great components. Before this purchase, I was commuting on an old Nashbar mountain bike from the early 90's. The years put in with this bike made the upgrade really worth it.  I always advise my friends to start commuting on whatever bike is available...when it's time to upgrade, they'll really appreciate a new bike and be able to make an informed purchase.
Labels: interview