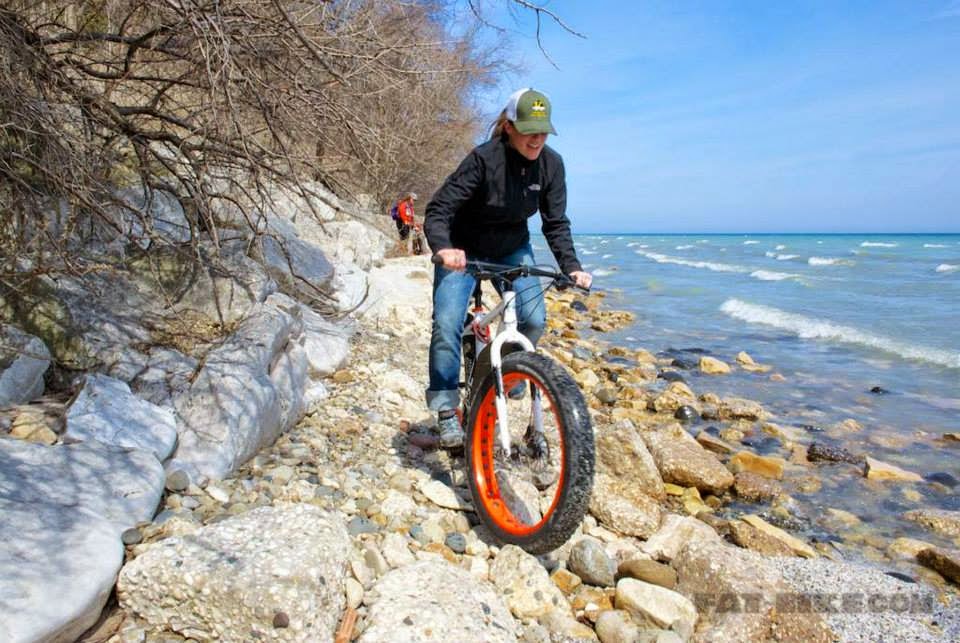 Meet Cathleen (Cat) Dobson, who I met through some local bike-loving connections. (A man by many names, and one of those is Spinner.)

She resides in Wisconsin and obviously, really loves riding bikes!

A great recount of a fellow woman who is experiencing multiple aspects of cycling. Not only mountain and gravel riding, but commuting as well.


A woman who refuses to let the elements win, but has the same mental struggles that even I continue to have when faced with cold/snow/sleet/winterygoodness.

So I have to ask women, if you aren't falling in love with the bicycle yet, what's holding you back?
It's so much more than pedaling and rolling on two wheels. It can open up so many doors- Cathleen talks about the social aspects that have come froth from cycling. Also? The health benefits are fantastic! Especially if you incorporate any off-road riding to your repertoire. Bicycles can and do change lives!

When did you first start riding a bike?
I started riding bikes as a kid, like most of us.  Growing up we were strongly encouraged (forced) to play outside, I think it has something to do with five kids and frazzled parents. My first non-handed down bike was Raleigh 3 Speed. It’s funny because looking back I realize that my Dad took me to GreenLake Cycle, a local Seattle bike shop where he had bought his bike when he was a kid.  I later bought a bike there as well…

What motivated you to ride as much as you have over the years?
Bike commuting is really what started all this years ago. In Seattle WA it was because traffic was crazy, gas was expensive and between a bike and a stellar public transportation system I could go anywhere in the city in less time it took to drive. I grew really accustomed to riding in the rain; I wish I was that tough about it these days. In Missoula MT, I rode because it is a very small friendly bike town, why bother starting the car?  Now I’m in Madison WI, another bike friendly town and I enjoy the same ease of commuting. In Madison I’ve found a social group that’s attached to biking and with that social group introductions to other bike activities; weekend rides, women only rides, bike polo and now fat bikes and mountain biking.

Have you competed in events? If so, what were your reasons for competing?
I do not compete.  I ride, it’s fun.

What kind of riding is your favorite? (paved, gravel, mountain, etc.)
I love riding gravel. It’s the freedom of the road thing I think that makes me love it.  Fat bikes and snow is pretty awesome too. Mountain biking may take over in the future, but we’ll see.

Do you remember how you felt on your first mountain bike ride?
"Whhhheeeeeeeeee!!!!" And "Oh crap that’s steep!!!!"

If you had nervousness at all, what do you do or think to overcome it?
Hahaha, have a few beers, it’ll be fine.

Do you use clipless pedals? If yes, what are some tips/suggestions for beginners that you would share? If no, are you thinking of trying it out at all?
I use clipless pedals and I struggle with them even now. I tip over for no reason from time to time. On flat ground. Seriously. Honestly though I think they are worth the learning curve though in terms of stability and power. Just be easy about it, don’t push it, don’t clip in if the terrain is difficult for you, and keep in mind it’s supposed to be fun.

If you are a commuter what are some of the challenges you face and how do you overcome them?
The biggest challenge is not letting inclement weather psyche me out of a ride. I have to talk myself through it some days and remind myself that I have spent waaaayyy to much cash on nifty biking clothes to not ride in the rain/snow and I just need to toughen up a bit. Then after that I remember how nice it is to have that time to and from work to get a bit of exercise and decompress.

The second thing I struggle with is having enough space for everything. Coffee, lunch, clothes. I suggest buying clothes that can double as office attire and are biking friendly. Pay attention to fabric, there are lots of companies that utilize “technical” fabrics in really cute clothes.

Have you had a bike biff? If so, how did you recover on a physical/mental/emotional level?
I am lucky enough to never have had a serious bike biff. I hope it never happens. But I suppose the same advice will hold true from my horse back competition day “get back on.” 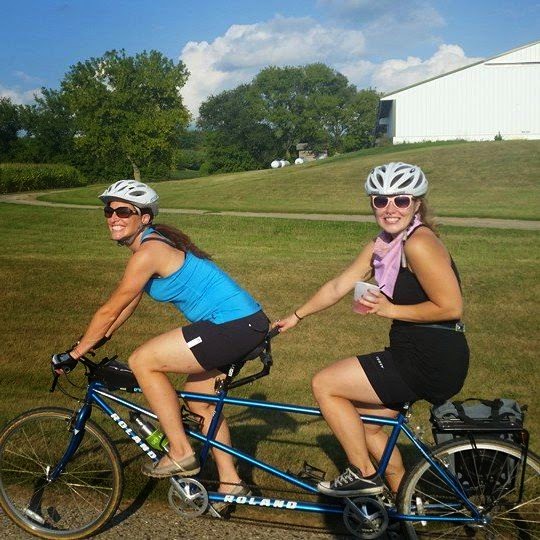 Tell us about your bike(s) and why you chose them
I have three bikes, because why not right? The first bike is the Surly Straggler. The best way to describe it is a gravel road bike. It has road bike geometry with a tougher steel frame and bigger tires then a road bike. It’s tough, perfectly suited for gravel roads, unpaved bike paths and the less than perfect roads that Madison boasts . I feel safe riding up and down curbs on it and its still fast.
My second Surly is the Pugsley. It’s a great fatbike and I like it as a mountain bike because it’s super stable which in turn makes me more confident.  With tires that fat it’s hard to tip over, plus it just seems to roll over everything.  As a former horse enthusiast I once told my way better at mountain biking boyfriend that “it feels like a fat steady pony that totally takes care of new rider and won’t jump out of under me.”
My last bike and possibly my favorite bike of the three, for sentimental reasons, is a 1963 Schwinn Fiesta cruiser.  It has a basket and pretty grips and whitewall tires.

What products/accessories do you love and would recommend to friends?
I have been enjoying Novara Mia Gel Double Bike Shorts this summer and now that they are on clearance everywhere I intend to buy several pairs for next year. I’ve also been really happy with the Crank Brother’s pedals. It seems they are much easier to unclip from then other brands of clips I’ve used making me feel more comfortable using them while mountain biking.
Labels: interview