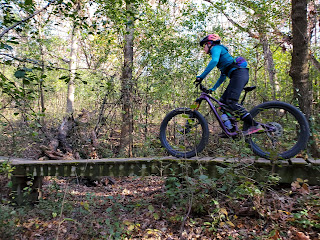 Travis and I managed to sneak off on one last Tuesday adventure trip before we would head to Sedona, AZ for my first Roam Bike Fest experience! Due to timing and weather, we made a trip to Eagan, MN to visit the Lebanon Hills Mountain Bike Trail system. Like other locations we have visited that close trails due to conditions, it's a good idea to find Lebanon Hills on Facebook and check out the forums on the MORC website for trail conditions.

For us, the drive was roughly 2 1/2 hours away, so ideally we'd prefer to head to this location right away in the morning, but I had a massage that I was not going to reschedule.

Still, we had plenty of daylight for a solid ride and were able to make it through Rochester before it was fully dark. This location has now been put on our list for re-visiting in early fall next year along with visiting Whitetail Ridge. Early fall will allow for more daylight so we can make a longer trip out of both options on a couple Tuesdays.

Some notes right away on Lebanon- going on a weekday is likely your best option to get in a good ride without too much traffic. Even tho we were there on a Tuesday, there were still a dozen or so vehicles parked and definitely some folks out riding. What I was relieved by is that it seemed spread out enough, and we only had a couple instances where we got off the trail to let folks pass. These situations were typically at features I wanted to session, otherwise, if we had kept going there was probably only one rider that we would've had to get off to the side for. We were told that going on a weekend would likely result in a lot of traffic and I can believe that based on what we experienced. During the week you may see an uptick of riders after school or after work. 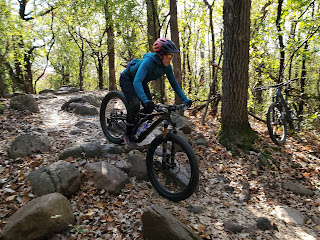 Everything is one way, but there are some areas where you have what I call a "Choose Your Own Adventure" split where you can go Extremely Difficult, Very Difficult, or Difficult. You would have two of those three options to pick at certain points. It's definitely a way of splitting the ride up for folks as not everyone will want to try the most challenging route possible. However, be aware that if you are wanting to session a spot, keep on your toes and watch out for riders coming behind you. The last thing I wanted to do was screw up someone's ride because I wanted to try a spot or feature over again. (There were a couple times that I was super psyched over something I rode and went back up the trail to re-ride it. Again, keeping an eye out so I could quickly get out of the way of folks coming down the trail.)

There is a nice trailhead with ample parking and restroom/changing facilities. By far it's one of the nicer trailheads I've seen/experienced and the fact that the bathrooms were warm was a treat! It was around 40ish degrees when we rode, but in my opinion, it felt chillier than 40. I wore a longsleeved Specialized baselayer with my Specialized thermal mtb jersey, liner shorts, Specialized Andorra Pro shorts, and my knee/shin guards. The guards were long and basically acted like knee warmers and were probably overkill, but I'm pushing my limits more and more with what I'm trying to ride so I was not going to deny myself extra protection. (My shins are still healing up from Viroqua!)

The signage is very good and easy to utilize- rule of thumb is to keep left. We didn't use TrailForks at all, but looked at one of the trail maps a couple times. We didn't do the whole outer loop of singletrack, but we did a good portion of the outer loop and I believe all of the inner trails. During the first loop of riding we incorporated as much of the extremely difficult trail options as possible. 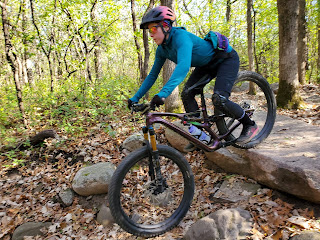 You could ride all of the trails on an XC bike, and I think my Specialized S-Works Evo would have been a fine option in the end. Instead, I rode Frankie G. my S-Works Stumpjumper, which is what I consider the best bike for me to ride trails blind with. With some of the trail options, we rode where there were drops and jumps, etc. I felt comfortable and safe on my Stumpjumper where if I had been riding my Evo, I may have been more hesitant about riding some of the things I did. It's very likely that if we do make a trip to Lebanon next year, I will ride my Evo to take some of the edge off climbing yet still give me compliance on some of the drops/technical spots. Having a dropper post was also nice and it was utilized quite a bit with the ride (I will not be taking my S-Works Epic to this trail system due to it not having a dropper.)

Most of the bikes we saw appeared to be your typical fast-riding XC bike or perhaps something along the short-travel side with 130mm of suspension rather than 150/160mm.

Frankly, I wasn't sure what to expect with our trip to Lebanon because I haven't been super impressed with any of the videos I watched on the Lebanon system. I was also unsure if I would actually enjoy any of the technical/extremely difficult/very difficult sections. Most of what you saw for YouTube videos highlighted the super challenging parts, but what you didn't see were the areas further in that were fun to ride. I'm sure it would make for a super long video, but I was pleasantly surprised by what I experienced when you got beyond the qualifier/filter feature(s).

I found myself riding or trying to ride things that took me out of my comfort zone. 99% of the time, my re-do of a particular section resulted in success. There were times that I had to take a couple attempts due to me psyching myself out or my bike bouncing around on rocks. I appreciated having a trail system that had a lot of progression features strewn within. 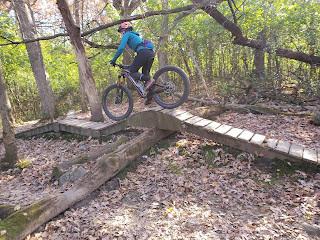 There was one point during the latter part of our first ride where I was stoked to finally figure out how to pedal wheelie up and over a sizable water bar. However, on the uphill and through a rocky section I fumbled and hit a rock with my front tire which caused me to fall over. I was annoyed, but I was determined to make it and went back down to the very bottom to do the whole thing over again. I was faced with the struggle of knowing better on how to do a skill, but still new enough that putting it all together that it was something that I couldn't do perfectly three times in a row. I got a bit snappy at Travis, which I apologized for, and turned my negative energy into fuel to get me up that damn hill. I was thrilled to finally get a successful pedal wheelie in, made it through the tricky rock section and almost to the very top, but my pedal hit a rock towards the end of the climb that had me put my foot down. I was both defeated and proud and knew it was something I wouldn't be attempting again as I was tired out from that effort. I took Travis' suggestion and had a maple syrup packet and realized that I was hungry and thirsty. No wonder! I had secretly turned into a hangry hippo all while trying to session. After I had my snack, I felt emotionally ready to tackle whatever else lay in my path. 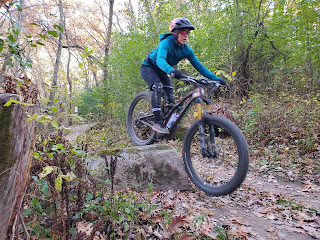 We made our way back to the trailhead to take a break from riding and eat a more substantial snack. I played around in the skills park area for a little bit, too. With dry gloves and more fuel in the tank, it was time to ride round 2.

This time we knew time wasn't on our side, so instead of choosing the most difficult trail sections, we toned it down to the less difficult ones. This resulted in one of my favorite loops yet, and my having the confidence to go off of a jump and fully immerse myself in the stoke of growing my riding skills. The entire time we were riding I was making a solid attempt at what I call "hucking it" which for folks who might not know what that means: I was trying to play around more. Take smaller jumps on the side of the trail, get air when I could, etc. 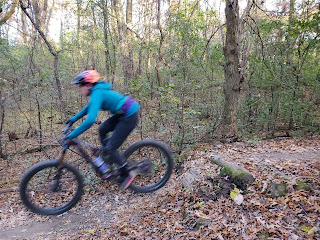 I was solidly happy that during the second ride I felt a lot more confident with my bike and handling skills. This is why I want to go back and ride Lebanon on a day where we have more time and daylight. I feel that with the more loops we could've gotten in, I would've gained more confidence and felt better with my handling skills. It was awesome to feel like I had experienced progression with a couple loops on a new trail system.

The other nice thing about this trail system is that there isn't such a price to pay to get to the top. The climbing was more on par with what we experienced in Hayward and less like what you experience in Levis, Decorah, La Crosse, and Viroqua. You climb some and you have a lot more "middle" to ride and decent flow for descents. So for us, it was a treat and the climbs felt like cake (minus the climbs where you had to ride over big log water bars, ha!) 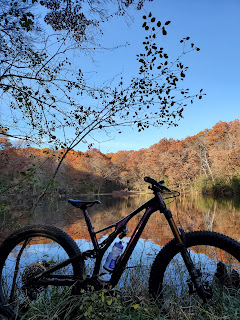 We didn't ride the whole park, but we had over 20 miles of riding in, which made it worth the drive.
As I mentioned before, be sure to look up if the park is open for riding before you make your trip. Ideally, going on a weekday will probably result in less traffic, but if you have to go on a weekend be sure to practice kindness and patience toward other riders.

Lebanon is more XC-oriented, but if you are comfortable handling your bike, you can surely spice it up and have a fun time or take the opportunity to really challenge yourself on some techy trail sections. All in all, a super enjoyable experience and definitely a trail system I would recommend visiting at least once!
Labels: Bike Life Adventures bikelife fearless women of dirt happyness iamspecialized Lebanon Hills MORC