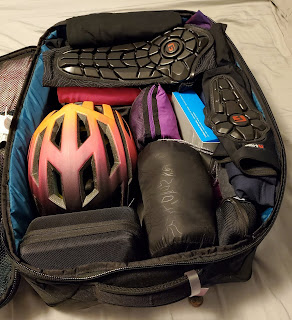 This is going to be a multi-part series for my first time attending a Roam Bike Fest! I hope to have some video clips/video on YouTube at some point. For now, I'll document the journey and recount as much as I can in this post to help you plan ahead for your future Roam Bike Fest trip.
I was invited to attend Roam Bike Fest last year, but was unable to due to my schedule and took a raincheck to attend this year. I did not pay for my fest pass, but everything else for the trip was paid for by me.


I planned to attend the fest on Friday and Saturday so when I booked my flight I made it so we'd fly in on Thursday to get settled and maybe sightsee a little bit of the town and fly out on Sunday. Being a natural introvert, I figured that two solid days of bike riding in unfamiliar territory, socializing, and making new friends would be enough to wipe me out. I also went for the option of securing transportation to and from the airport with Groome Transportation as neither Travis or I wanted to rent a car and drive in an unfamiliar location.

I made a last-minute decision to rent a bike for Roam a week before the event at Absolute Bikes. Nate was super helpful on the phone when I called up, realizing I had mistakingly selected an available bike in Flagstaff rather than Sedona. Hindsight is 20/20 and I did not purchase a VIP Demo pass. I knew I would be looking to do a lot of stuff at the fest, but then I worried that I might not get the amount of riding that I hoped for unless I brought my own bike or rented. I'm not quite ready to fly with my own bike at this point (I don't have a proper travel case yet) so renting was a fine option.

(Note: if you are traveling to the fest and are concerned about having enough bikes to ride I would highly recommend splurging for the VIP demo pass OR look at the area bike shops ahead of time for bike rental options. In the end, I'm happy I rented a bike that is similar to what I'm used to, and then if I want to try something else I'm able to.)

Know that making a decision a week before a popular destination event is not going to give you the largest selection of bikes to choose from for rental, especially when you are a size Small. The bike I went with is a size Small Specialized Stumpjumper Comp 29. I ride a Specialized with 27.5+" wheels, so I figured that this would not be completely alien to me as I've ridden 29" wheels a lot...just not on my Stumpy. Beggars can't be choosers and I assumed that a majority of the bikes that would be available to demo at the fest would be either 29" or 27.5" and this way I'll know once and for all if I'd ever want a second wheelset for Frankie. At the time, what was most important to me was the suspension travel. For riding somewhere new I feel I have the most confidence with full squish (150mm) and figured that I would limit myself with the short travel option. Between wheel size and suspension, I felt that the suspension was the more important part for me and wheel size was second.

The nice thing about Absolute Bikes is they are located close to the hotel we're staying at: Wildflower Inn. Also, the location of the hotel is within easy walking distance or biking to the fest! I specifically chose this hotel for several reasons: Ease of getting to/from the fest, location to bike shops/food, and affordability. Wildflower Inn is one of the locations that was recommended to me by Ash when I accepted the Roam invite. If you aren't looking for a hotel to stay at there are Air B&Bs options or you could choose to camp.

What helped me with the preparation were several things: I committed early and took steps to secure a place to stay and my flight right away. Those were the two most stressful and intimidating parts of the whole thing. Next was making my reservation for transportation from and to the airport which I did online when it was closer to the trip and I had received my flight info. I purposely waited closer to the trip date to set up transport because a month or so after purchasing my airline tickets the times changed.

Also helpful are the emails that you get from Roam letting you know event updates and tips/tricks to make your time with them more enjoyable. They even give you a packing list to help you feel prepared, which I thought was awesome.

Another thing that I enjoyed was the videos that Tess aka Dusty Betty posted giving a preview of some of the areas that folks will be riding at the fest. I watched them several times over so I could get a visual idea of what the riding would be like. Granted, nothing will be the same as actually riding out there, but the visual and the riding tips were all helpful. The nice thing is that if you aren't wanting to do your own thing, there will be plenty of group rides to attend. If you are wanting to attend a group ride and you haven't ridden in AZ or an area similar, it's recommended to start off with an easy ride to get your feet wet.

Packing is a whole 'nother story and I neglected to start packing my bag until the last minute. (For me, packing the week of is last minute!) However, I wanted to have an idea of what the weather was going to be like in Arizona to get an idea of what to bring along. I tend to pack the kitchen sink because I'm unfamiliar with how Arizona temperatures feel compared to Iowa where you have a bigger chance of damp cold/damp heat rather than dry.

As you can see in the above photo, I think I did a pretty solid job packing my bag! (I still had room to add an extra flannel shirt and my unicorn horn headband.) My backpack will hold my Camelbak and have room enough for any purchases I plan to make while at the fest (that's guaranteed!)

Travel contributes to my anxiety, but I planned ahead as much as I could to alleviate as much anxiety as possible. I wanted to ensure I would feel excited about this new adventure rather than anxious. This concludes part 1 of my Roam Bike Fest adventure and I look forward to writing about my Roam Bike Fest experience! 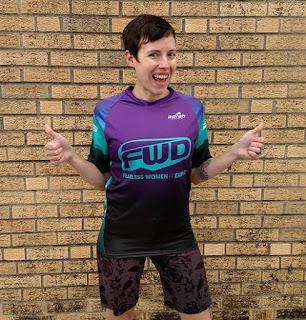 P.S. If you are attending Roam in Sedona this weekend and follow my adventures, I would love to meet you!

Keep an eye out for a purple Camelbak with a Rainbow Dash keychain dangling from it and/or this jersey ----> !! Note that my hair is longer than in the picture and if it's chilly I'll be wearing a purple wind jacket. I also have a purple puffy jacket. (I like purple a lot.) I am a hugger, high-fiver, and am super stoked to meet everyone!