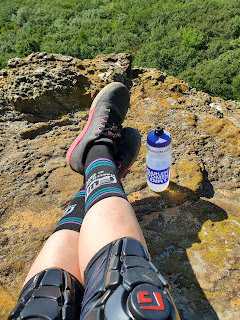 Our last trip to Levis was in 2017 and the stars aligned for Travis and me to finally go back to Wisconsin to ride mountain bikes!

Levis is not far past Black River Falls, WI and the drive is a beautiful one. Like heading to Hayward, you eventually come to a point where you see tall pine trees lining both sides of the road. Gosh, I love that so much I can't even tell you. The GPS took us on some back roads giving us a scenic tour through some countryside that we had never seen before.

It was a gorgeous day with sunshine and temps in the 70's. Truly luxurious when it comes to having a great time on the bike. My water knee had also gone down and was looking normal again after our Hayward adventure. Yes! I was hopeful that I could get in as much biking as my heart desired, which would be at least 20 miles.

If you're driving that far, you might as well make it worth your while, am I right?

Levis has a wonderful chalet that offers not only restrooms but showers too! Yaaaas Clean! You pay $8.00 per person for a day of mountain biking awesomeness, which I think is well worth the price. The volunteers put in a lot of time and energy to make their singletrack trails awesome during the dry season plus they do a lot of winter grooming during the snow season (snowshoe, skiing, and fatbiking)...trust me, you should go fatbiking in Levis! In other words, what you get out of your experience is totally worth $8.00 and then some.

When we arrived, there were a couple folks parked in the lot, and I can say with absolute certainty that we never saw a single soul out on the trails while we were there. That's how much space there is in the park! Now, weekends are likely different, but going on a weekday you can (most times) feel like you have the entire trail system to yourself.

Now, the hardest part of the whole adventure was trying to decide what bike to roll on. I had the idea in my head when I purchased my Stumpjumper that it might be the perfect Levis bike, but Travis wasn't sure that it would be ideal due to the climbing. Levis has a great mixture of XC singletrack that has you on lower areas without extensive climbing, but there is a lot of climbing if you want to get to the top and see the beautiful overlooks. The terrain is a mixture of sand and dirt with rocks and roots thrown in. When you are coming down from the top you'll have a wide variety of easy downhill to more technical lines with rocks and roots that having a bike with squish would truly come in handy.

I thought long and hard and decided that my Stumpjumper, Frankie G. The Glitter Queen, would be my Levis steed. I've ridden Levis on a full-suspension bike before (that was 27.5" wheels and 130 for suspension) and the last time was my 27.5+ Beargrease. Both of those times I had a lot of challenges and neither option was my "perfect" bike for one reason or another. I felt confident that the tables would turn on this day with my S-Works Stumpjumper boasting 27.5+ wheels and a cushy 150/140 front/rear suspension. If nothing else, it would look good in pictures!

Levis has a lot of trails, so there are a lot of different options when it comes to riding, and because we don't ride enough there on a regular basis it always feels like we're touring around. It keeps it fun and low-key. 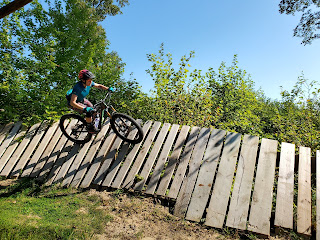 We started on the lower trails to warm up first, so Lower Glen and rode Wolf Run where there was a new wallride. It looked large and intimidating to me, and I told Travis I wanted to find some smaller wallrides to do first before committing to that one. We made our way to Goat Dance where my wish was granted, and there I did my first wallride and found it to be incredibly exhilarating! I forget how many times I rode it and each time I felt my confidence rise. Eventually, we continued on and rode a smattering of trails that took us up to the top of the bluff and around.

One of my favorite moments was sitting up on top of an overlook (FYI, find Clarence and you'll find them!) We took some time to sit, eat our snacks, and listen to the breeze. There wasn't much for fall colors, but it was still beautiful and calming. Vultures were gliding around while we watched a butterfly and a dragonfly float around until they disappeared into the green of the trees below. It felt extremely therapeutic to sit on the sandstone rock and stare out over the world. I felt like my dad was there, appreciating the beauty with us. I could have sat there for hours, but that would mean we wouldn't be riding bikes. 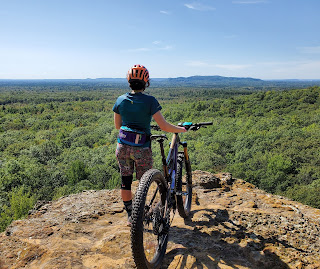 Another success was riding through "Plumber's Crack" and making the lefthand corner when you exit. Granted, I made it through my second attempt, but it was the first time I made it through without scratching my bike or bumbling. (Overcoming my anxiety of bridge-like structures and tight turns!)

I don't remember the trail we were on, but there was a tight corner wallride that we took time to session. I didn't ride it successfully until after my 3rd attempt or so. It was all about having the right momentum, and once I found the "sweet spot" it was game on! I had so much fun conquering something new and challenging. I was felt pretty darn euphoric. 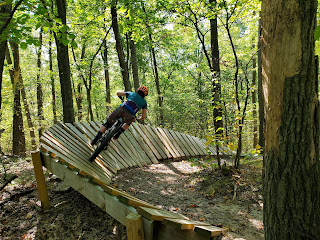 We made our way back down to the lower trails, took a quick break back at the truck to adjust air pressures/use the restroom/have more snacks, and then made our way back up. We played around on Lucy's Loop where I surprised myself with being able to ride quite a few of the features. I was able to ride a long skinny without falling off, which surprised me! I know the last time we rode at Levis I tried multiple times and didn't make it. I rode on some teetertotters and another log ride that would've originally freaked me out because of the height off the ground. Skill-building achieved! 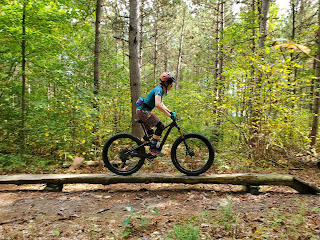 On our way to the upper trails, we did the loop around Porky Point, and I successfully rode 99% of it! (I had to session a spot where we had to ride up some rocks to get to the top.) I was super impressed with myself. Well, actually, I wasn't sure if I was impressed with myself or the bike. Both? Likely.

With the second half of the ride, we were trying to ride trails we hadn't ridden during our ride. I saw the sign for Cliffhanger and reading "Advanced" piqued my interest. Okay. Let's see how challenging this is! (Josie of 2017 would not have said that.)

I know I've ridden down Cliffhanger in the past, but I also know that I spent a majority of the time walking over the drops, rocks, and rooty sections. This time I dropped my seatpost and went for it- I kept my bike rolling and didn't have time to worry over what was coming up. I went slow and steady in some spots, a little faster in others, and when we were done with the trail I had to ask "Did I just ride Cliffhanger dabless?" I was so focused on what I was doing that I wasn't even thinking! Hot damn! 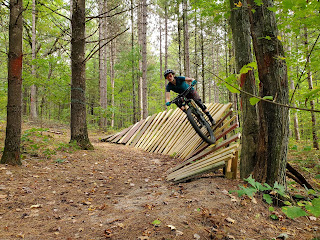 The final goal of the day was to go back to Wolf Run so I could do the wallride that I opted out of the first time. I was getting a bit tired, and at one point I worried that I somehow took a wrong turn and missed it! Then, in the distance, I saw it. I hammered down and rode that wall like a boss. (Travis would say so!) I had to ride it a few more times so we could get some photos/video, and each time I loved it. Who knew I'd like wallrides so much?!

What I learned from our Levis Adventure:
I have progressed a lot with my technical riding ability.
Having the right bike makes a huge difference in how confident I feel.
Plus-sized tires definitely have their place in my world.
A dropper post is a luxury that is nice to have.
I feel ready to ride in Arizona.
Not having anxiety while riding is completely awesome.
I love that I have a bike that can store snacks! 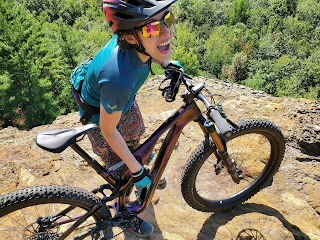 After we cleaned up and changed, we made our way to a bar & grill called Re-Pete's as I had decided a week ago that I wanted to have their version of the Frisco burger. (Back in the day when Hardee's didn't have mammoth burgers, they had a Frisco burger that I absolutely adored. That being said, I can't remember the last time I ate at a Hardee's so it's been a very long, long, long time.) The burger was very good and the horseradish sauce did this funny thing where it would make the back of my sinuses tickle like I wanted to sneeze, but not make me sneeze. I had a big ol' mug of ice tea and believe me, I drank down two of them. All in all, the meal was excellent and I felt that it was just the thing I needed after biking over 20+ miles. 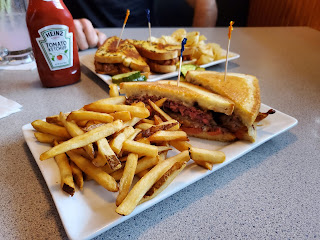 On the way back we made an impromptu stop at Woodman's to check out their beer selection as well as sparkling water options. Truth be told, I'm making the conscious choice to not drink beer on a super regular basis anymore. After talking with a friend, I realized that I've had a beer a night, every night, for several years in a row now. I've never really taken a break from it because I didn't feel that there was a specific "need" to. It's not like I put back multiple beers a day or in an evening...sure, sometimes on special occasions I'd have multiple (max 3)...but I felt like I had legitimately come to a point where I was curious on what would happen if I had less. Not eliminate 100% but just less. I guess I came to a point where I felt like having something like beer becoming a habit more as something out of enjoyment just didn't sit well with me. So now I'm indulging on different flavors of sparkling water- and it's amazing how many boxes of sparkling water you can purchase for so little money! (Compared to beer that is!) It's not to say I won't have an outing with a friend for a beverage, but I'm going to decrease the consistency of which I have a beer for the time being. (More on that in a different post.) 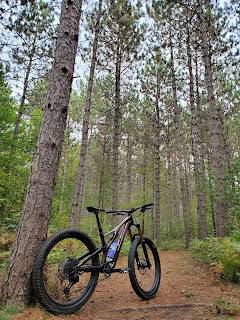 All in all, our adventure to Levis Mounds was a success and after riding there again I can definitely say I'd take my Stumpjumper back. No question! I felt the most confident I had ever felt while biking up there on my Stumpjumper, which makes me feel extremely grateful I bought her. Nothing makes me happier than experiencing a truly united relationship with a bike.

It was awesome to see Travis truly impressed with my riding, even he didn't think I'd take to wallrides like I did! The Josie who rode Levis in 2017 surely wouldn't, but the Josie of now totally does. I also felt more excited to ride in Levis because I was able to ride I'd say 90% more this time than I did last time, which made me feel excellent. Progression rocks.

There is much going on in my Bike Life right now, and I can't wait to see where it takes me!
Labels: Bike Life Adventures bikelife fearless women of dirt iamspecialized Levis mountain biking S-Works Stumpjumper Specialized Stumpjumper