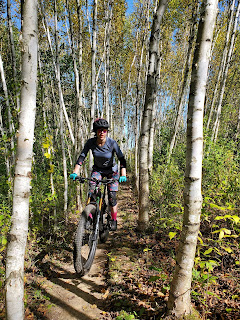 A couple months ago we went on an after-work adventure to La Crosse, WI to visit Hixon Forest with our friends to scope out the new downhill (DH) trails. We had ridden our local trails plenty, so it was high time we ride elsewhere for a change, even if it was for a couple hours. That evening was a small sampling of the fun that could be had if one took a trip to La Crosse, and since then, it had been on the fall riding bucket list.

It feels like our fall weather will be short-lived, so I've been working on cramming as many Tuesdays with out-of-town adventures as possible.

The weather became favorable and the trails had tried out enough for the ORA website to scroll "Trails are Good" across the top. I squealed with glee! (and scared Travis while I was at it.)


The bike of choice would be Frankie G. The Glitter Queen aka my custom-built Specialized S-Works Stumpjumper. Even tho we would check out some of the other trails that Hixon Forest had to offer, I knew she'd be the best option for the DH trails, particularly the trail named Vader.

We rolled into the parking lot early afternoon, and as luck would have it, we got to chat with Jed (he's done trail work on the trails for years, is involved with ORA, and a genuinely rad fellow.) Turns out, there would be a film crew out to take footage of locals riding the new DH trails- so it was the perfect opportunity for us to explore some of the older singletrack, some of which had been re-routed since our last ride in La Crosse. I had done some research on TrailForks to get an idea on the trails and which ones would be considered "one way" and to figure out some sort of route. There are a couple trails that are listed as directional and several that are good for both ways. Even with research, there were still times when we weren't 100% sure if we were doing it "right." I suppose that's the adventure part!

The loop of original trails we worked on was Stinky to Chicanery to Quarry Trail, back to Chicanery to boB. There were some beautiful sights along the way, like riding through a prairie filled with dragonflies. When we were back on Chicanery, we took time to session a rocky section that I'm sure I would have avoided at all costs the last time we visited. It took me a couple attempts to clean it, but I got it on the third try and did it again on my fourth. That made me feel pretty darn good! 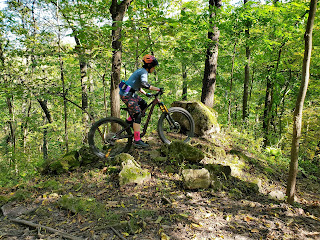 After we exited boB we took the prairie path back to the parking lot so I could get a swig of water. In my excitement of going out of town for a ride, I pulled a "Josie" and totally spaced out on bringing my Five Ten Freerider Pro shoes and my water bottle. I purchased a bottle of water before we got to the trailhead so I could have something to drink besides Travis' Camelbak water. (Am I saying warm, chlorinated tap water doesn't taste good? Yup.) The shoes weren't a huge deal, I was rocking my Specialized 2FO 1.0 shoes, and they work great with the pedals on the Stumpjumper.

It was time to hit the downhill trails!

The first trail on the menu was Jedi which featured a good number of fun berms and plenty of jumps for those who are confident in doing so. At this time, I will admit I'm completely novice with being able to ride DH trails well and incorporate jumps in at the same time. I need a few more runs first, and probably some backyard jump sessions before I'm to the point where I'll send it off of most.
On this trail, there will be a bigger jump that you can launch, but there is a ride around next to it. I opted to go that route. Just note that if you aren't a fan of ledges, ride cautiously and don't look to the left. All in all, a fun trail that can definitely help folks grow their skills!

Next on the list was Vader. This one is a more technically challenging DH trail with a jump in at the start (which I'm not ready for yet), rocky berms, rocky downhills, bigger berms, a few chunky spots, and a whole lotta fun. The first time on this trail I opted out of a couple spots, but this time I was determined I would ride everything but the very beginning. When you first start riding around the rocky berm you come to a small rocky downhill...you start thinking "NBD, this is great!" Until you roll up to the larger and steeper rocky downhill...it steps down a little and is full of chunk. That sobers you up real quick. Today would be the day!

Travis was nervous about my gumption to ride this downhill spot. If you mess up, there would be a pretty steep price to pay because you are far from a soft landing. (Sorry, mom...) I had knee and elbow pads on, but that wouldn't protect my face. Frankly, I was more concerned about my bike and maybe a limb than my face or anything else.

I took a deep breath and told myself I was very capable of conquering this downhill. I rode down Wall Street, I've ridden down Backbone, and I had a bike more than capable of eating the chunk.**
I rolled in, and on the first try, I was able to ride down what I would call "Rocky Danger Hill" successfully! I did it a few more times to bolster my confidence. (I made sure to be extra careful because it is a DH only trail.)

The rest of Vader was "easy" to me compared to that steep hill, and I enjoyed rolling around the berms and blasting over some of the chunk. The only part that wasn't as fun would be the ride back up to the top. I'm used to "paying the toll" on our local trails, and really the climb back up isn't technically challenging. It does make my left knee a bit grumpy, so I knew I'd be limited with the number of runs we could do. 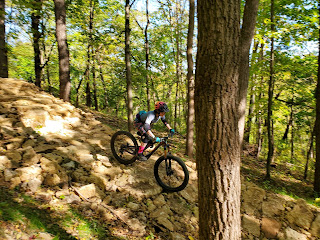 Next was Nerfherder, which I would say is the least technical of the other two DH trails. It has some more "pump track" type rollers, some jumps you can do or avoid, and berms. I rode down this trail with a big ol' smile on my face.

I knew my riding time was coming to a close, I would have to stop before my knee really took a disliking to me. Plus, our hope was to be back home in time to go to a movie, so...figured out priorities and asked to do Vader again one more time. This time no sessioning spots, just riding! It was fun to go in and (responsibly) blast down chunk, hit berms, and feel my bike and self as one unit. I was sad to have it end so quickly, but I was happy to see a chipmunk dash down into his hole that was smack in the middle of the uphill climb.

I ended the day on a positive note: I accomplished some personal goals, rode some stuff that challenged me, and also got to enjoy a style of trail we don't have locally. It was a great day, I was tired, and my knee didn't fully blow up.

I would highly recommend checking out the trails in Hixon Forest, but before you make a trip, make sure to check out the website to see if all of the trails are open, or if only the legacy trails are open. Folks spent a lot of time and energy to make the new DH trails and when they are too wet they are closed- obviously for good reason. It doesn't seem to take the area trails too long to dry out, so be patient and check the site.
-------------------------------------
**In the process of writing this recap, I went back to read my first writeup on the Hixon Forest trails and I said this: "Something with larger tires or more suspension would've been helpful." I would say that my Stumpjumper was an excellent bike for the job. Perhaps I could get away with a Stumpjumper ST, but for now, the full squish was most excellent- especially on chunkier areas that I wanted to session. I felt like the bike ate it up! I keep saying that this bike is amazing and I'm so grateful to have her in the fleet because I really am. It's been a fabulous and versatile machine and I highly recommend folks to try one out for themselves.
Labels: Bike Life Adventures happyness Hixon forest Hixon Park HPT La Crosse Wisconsin