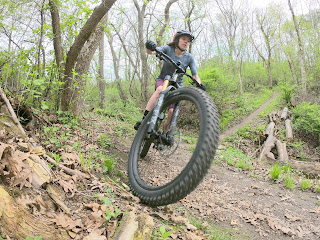 Sometimes you come to a point in life where you realize that you just might need one more bike. The Specialized Stumpjumper was not a bike that we figured was necessary for our area. However, we became friends with another couple who like flowy/downhill/park riding, and I knew that getting another bike would be a necessity if I were to really enjoy those experiences.

I made the leap into purchasing a Specialized S-Works Stumpjumper frame that was built to run 29" wheels and would turn it into a 27.5+ machine.

I figured this would be a fun way of using some "life money" so I could actually find some enjoyment with it. Why not spend some of it on a bicycle that would allow me to go to new places and expand my riding repertoire?

I saw some photos online of the Specialized S-Works Stumpjumper frame and thought "Dang, that looks pretty sparkly!" I love sparkles and I love purple, so I went out on a limb in hopes that it would be as awesome in person as what the photos were hinting it would be.

The frame is amazingly sparkly and the purple color shift to gold is super cool. Really, the photos I had seen online didn't do the frame justice- it's one of those situations where you have to see it in person to truly appreciate it. It's not super easy to get in pictures, either, as it entirely depends on the lighting and angle. 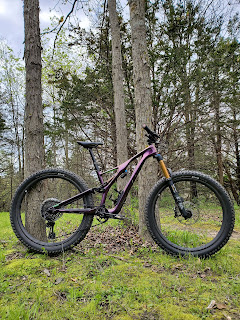 Below are all of the bits and pieces that were purchased to create Frankie G. The Glitter Queen.

This would be my first time in about a year or so that I would be back on plus-sized tires. My first experience with it was on my Salsa Beargrease that we converted to a 27.5+ and I enjoyed that bike to a degree, but never truly fell in love with it like I hoped I would. Not sure if it was due to geometry or what, but now experiencing plus-sized tires on a full suspension bike...I'm so in love with it!

We built this bike on the squishier side, rather than having a Short Travel option (which would make more sense for Decorah), so it's running 150/140 and let me say I'm surprised as to how much fun I'm having enjoying this bike on our trails. (I'll get to that in a bit.)

The geometry is different than any of my other bikes due to the fork having longer travel. I'm used to setups with 100-120 mm of suspension. Initially, I felt a bit "upright" on the bike, but after a ride, I felt that the posture was quite comfortable and really made sense for riding downhill. I feel a bit more "in" the bike rather than feeling like I'm on top of the bike. It's easy for me to maneuver and point the bike in a direction. I've been simultaneously excited and almost (slightly) scared with how fast I'm going down some descents. In control, of course, but the bike absorbs so much that going down a hill faster just happens organically.

We have quite climb-intensive trails, and I can say that this bike really does "climb like a goat." I've climbed up some of our local trails with the rear suspension locked out, in trail mode, or fully open. In all 3 settings I felt like it climbed well, however, I can't say I've not hit a pedal on a root or rock due to the lower bottom bracket.

At this time, I haven't hit anything hard enough to damage pins and I'm working on my timing with certain sections to avoid pedal strikes.

The bike was sent in the low setting, which I did take the bike out on a ride with the original setup and had fun- but noticed the pedal striking a lot more than I did when we made the adjustment for the bike to be in the high setting. For riding our local trails, the high setting makes more sense due to the climbing.

(What does the flip chip do?: The Flip Chip that lets you to dial-in your Stumpy to your riding style. Switch it from High to Low and it drops your bottom bracket 6mm and slackens the head tube by half-a-degree.)

The low setting would make more sense if I were riding more downhill/flow trails that didn't have much climbing to them or if you did climb, there weren't rocks/roots in the way.

All in all, even tho we built this bike for taking on biking adventures, I've really been enjoying the ride it has on our local trails. I wasn't entirely sure how quick I'd take to the Stumpjumper, and I was stoked to make a 9 mile per hour average on a grouping of my favorite trails on a bike just shy of 30 lbs. Being this bike is heavier than the others in my quiver, hitting a high-for-me average made me super happy! The fact that it made me feel more confident to let loose on the downhill sections is an added bonus.

The true test will be when I can take this bike elsewhere, but until then, I'll roll with it on our trails and enjoy the heck out of it. 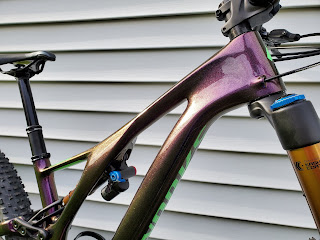 What about the name?
Frankie G. The Glitter Queen
I found the Netflix show Grace and Frankie and I really enjoy the character, Frankie. She's a bit wild...your "New Age/Hippie" who is big in personality and wears purple. G is for Glitter...because the bike seems to be full of it.