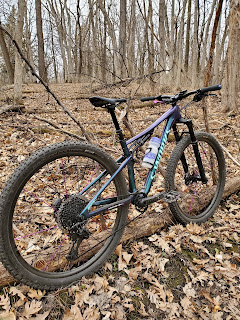 Mid-2018 I happened to see a frame pop up on Specialized that I absolutely fell in love with. It was an oil slick S-Works Epic frame, and I knew I didn't need it- but I wanted it! To warrant this frame, we needed some sort of purpose. I wanted a bike that would be more playful and sure-footed to take elsewhere.

I felt like more squish would be nice, but at the time I wasn't thinking of or planning to have a Stumpjumper, but something that could be more easily utilized around Decorah and elsewhere. So, with that, we decided to build up a Specialized S-Works Epic Evo.

This post will be my first review on my S-Works Epic Evo and I plan to write another one after I've had more rides on it later in the season.


Wheels- Rebuilt Carbon Ultralite 24 wheels that were originally on my Salsa Spearfish. We had the wheels rebuilt with some alternating purple spokes for a little bit of flare.

Drivetrain- Sram XX1 Eagle with Sram X01 Eagle Cassette. We opted for the X01 Cassette because I really don't care for gold as a color so much, and the weight savings was minimal.

Other bits included oil slick titanium bolts along with a top cap and oil slick bar plugs from Supacaz.
I have a Specialized Speedzone Wireless computer to keep track of my rides as I like to keep things low-tech.

I was able to take this bike out a couple time during the month of April before winter decided to make a pit-stop back to Iowa with snow, sleet, wind, and cold temps. I wasn't entirely sure what to expect. I knew there would be some familiarity, but I know the larger concern was if the fork would be something to keep or say "That was great, but let's do something different." I guess you could say it was the elephant in the room, but at least it was a good looking elephant and really tied the bike together nicely.

All in all, my first few rides I would say that I didn't feel challenged by the handling. It was different in some circumstances, but I also attributed it to being my first couple rides out on the dirt trails. I didn't feel that it wanted to wander every time I rode a straight line, but I did notice that it would happen here and there. I also found myself realizing I would need to learn how to change my body posture on the bike during some climbs, particularly on some of the steeper ones.

With the offset, my posture is a bit more upright and the front wheel is a little further out in front. Honestly, I would say I've felt rather comfortable on the bike with that setup, especially for how the bike handles being pointed down a hill. Oh. My. Gosh. It is awesome!!!

I don't want to sound like I'm exaggerating, but as soon as I went down a hill I could feel the bike come to life. It was hard to not go fast, and that was really fun but also made me a little bit nervous because I felt like it could just GO! It also felt really good when cornering down a hill; responsive and nimble. I feel like the tread on the tires helped keep me planted with the larger lugs, too, as they are definitely great at biting into the ground and keeping you planted. 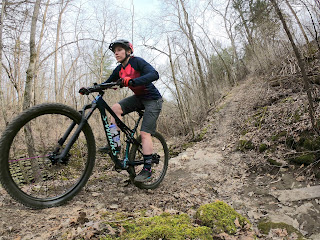 I am still working on getting used to the dropper post. I learned to mountain bike on bikes that had traditional dropper posts, so have gotten used to the feeling of the saddle between my legs when descending. We don't have (in my opinion) a lot of areas in Decorah where I feel I would absolutely need a dropper post in order to ride it confidently. Utilizing the dropper will give me another level of bike/body separation and I think I can develop more skills from learning that.

I've really enjoyed having 120 mm of suspension in the front (compared to my Epic and Epic HT) and find that I feel more confident in letting off the brakes.

I have noticed that the tires are definitely on the heavier side, and sometimes can feel a bit boggy, but this bike was built with the concept it would be more of a traveling adventure bike, so I wanted to have durable tires. There might come a time where I opt to swap the tires for something without Grid casing, but at this time I'll keep them on there.

I've been figuring out where I'd like to have the rear shock set in terms of how soft it is. Originally I had my first couple rides with it on soft, but have since moved it over 2 clicks to firm it up a little. I'll need a few more rides before sticking with how I have the rear brain set.

General riding I've found it to be fun and as I mentioned, there are times where I can acknowledge that the offset is different, but it hasn't been anything where I would say it rides like crap. My hope was for this bike to be a mixture between a Stumpjumper and an Epic (and then I go and buy a Stumpjumper frame, but that's a different story right there!) and I feel that with how we have the bike set up, it's a great combo. It can climb up hills and get sendy on the downhills- it has familiarities to my favorite bike, yet also feels like a different bike.

We figure the weight of my S-Works Epic Evo is roughly 24.5 lbs and it's a whole lotta fun!

The name itself is a story but I'll try to keep it a short story vs. a chapter book.
With all that had gone on in 2018, I looked at getting this frame as a reward for the hard work (mentally and physically) I had to put in to take care of my dad's estate. My dad collected guns and what many folks do not know was that I had to house his collection of 46 for about 5 months. I looked at this bike and figured there wasn't a better way to celebrate life than to add to MY collection...which are bikes.

Shreddy is how I feel when I'm riding this bike. Ruger is a gun brand. They sound pretty sweet together (even tho it rhymes with a horror movie character...harhar...). Shreddy is not going to be dubbed a specific "gender" as Shreddy is Shreddy.

Shreddy also rhymes with Freddy and I remember my mom asking me "Ready Fred?" or "Ready Freddy?" when we'd leave my grandma's. I smile thinking about asking "Ready Shreddy?" before going out for a ride or riding down a hill.