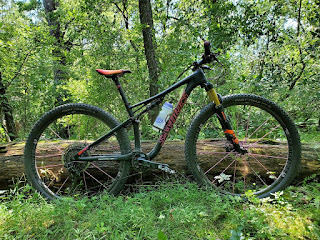 Shortly after becoming a Specialized Ambassador I was given the opportunity to demo a new saddle, the Specialized Power Saddle with Mimic. The concept of this saddle was intriguing, and I figured I didn't have anything to lose. I had a saddle I was currently running that I liked well enough, but you never know what can be improved unless you try.

The saddle I had been using had a cutout, which I thought worked well for long rides as well as mountain biking. I found out after my last Chequamegon 40 event that the cutout did not help me as much as I thought.

I had spent a lot of time in the saddle that day due to wet conditions and I found that I was not only numb for a while after the ride, but I had discomfort all over my lower half- sit bones, pubic bones, you name it. I was excited to have the opportunity to try new technology that could make my soft tissues happier.

It wasn't a perfect fit at first, truth be told, the Power Saddle might not be for everyone due to its unique shape. I struggled with the size that had been sent, which was a 155mm, as I felt like it irritated my sit bones and my inner thigh too much. Even with adjustments to angle, fore, and aft, I made the decision to try the 143mm size instead. When the smaller saddle arrived, I compared it to my previous favorite saddle and the shape of the rear looked more similar in size. I became hopeful!

I was given another busy year with few gravel rides to be had, so most of my rides were mountain biking. One day I was feeling strong and decided to hit a 20-mile goal (20 miles of riding mostly Decorah singletrack. Doable? Yes. Challenging? Yes.) I figured it would be a good way of helping me to mentally prepare for Chequamegon, plus get a lot of butt-on-seat time. I wasn't going to make it easy, I had several climbs in mind for my ride that would keep my butt on the seat in order to crank them out.

I rode McNasty, my S-Works Epic which has the Down Under LTD. Power with Mimic Expert Saddle and I also wore Specialized Liner Shorts with SWAT under my Shredly Multi-Sport shorts.
The liner shorts have a 3-D chamois that you can find in other Specialized shorts, and I found that design to work super well with the saddle on previous rides, so it was a no brainer to wear them on this longer test ride. 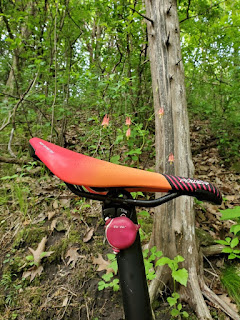 Hours later after my ride was done, my butt was tired, but only because I had ridden for 20+ miles. Nothing hurt or felt numb and tingly- truly awesome! I've found that the Mimic technology has been super effective at increasing my comfort, especially when I'm putting out a lot of seated effort.

When it came to Chequamegon weekend, we opted to ride mountain bike trails instead, so we put in over 20 miles on that Saturday and nearly 20 miles that Sunday. I would say that my lower half was pretty tired after all of that riding, especially on Saturday due to how rocky and bumpy it was in the area we were riding. Was I numb? Nope! Chafed? Nope! Where I felt tired was to be expected and I was extremely happy with how the saddle performed.

What is special about this saddle is the Mimic technology used to increase comfort- instead of having a cutout, there is soft, memory foam-type padding that is in the middle and on the nose to give support to soft tissues. I have found this to work a lot better for myself when putting in a seated effort on climbs. Instead of feeling like I'm ramming my soft tissues into the cutout of my seat, there is support and cushion instead. I have found the mimic technology to make a big difference with how my soft tissues felt post-ride. I would recommend this saddle to anyone who likes to put in lots of miles of riding be it singletrack, gravel, or road.
Labels: iamspecialized Mimic Technology Power Saddle with Mimic Product Review Review Specialized Specialized Power Saddle