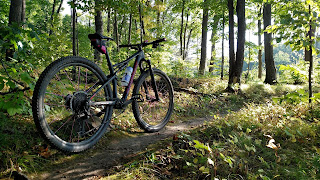 Late last year I introduced you to Stephen McNasty, my 2018 Specialized S-Works Epic.

This would be my new XC machine that I'd use for general riding and for the few races I attend throughout the year.


The good- due to the timing of his arrival, I could get a few rides on this awesome bike before winter. The bad- I got only a couple of rides in before we had to hang him up for winter.

Those rides were enough for me to feel that the investment was a great decision, but it left me wondering "What else?" What was I missing out on or what would I not realize about this bike until after I've had more hours in the saddle?

This year, unfortunately, wasn't filled to the brim with riding like I hoped, but I did manage to have a solid number of rides on McNasty to say that I'm still very happy with the bike and I will be keeping him in the stable for a very long time.

When I first rode McNasty he was mostly stock minus a few small changes. During the 2018 season, we started making additional changes.

Change #1 was the addition of a sweet Industry 9 Ultralite carbon wheelset with pink spokes.

Change #3 was trying out different tires. At one point I was playing around with Specialized Renegade tires in the 2.3 size both front and rear. I had fun comparing the tires to the Fast Traks that were originally on the bike, but in a staggered size: 2.3 in front and 2.1 in back. Overall, I think the Renegade tires would work pretty darn slick if our trails had ever been dried out long enough to warrant using such low-tread.

Many might put a Renegade in the rear and keep a Fast Trak up front. I did not try that combination out this year.

I had amazing success with the Fast Traks given the consistent wet conditions this season and ultimately made the change back to them. We put the 2.3 size on both front and rear as I wanted to see if I could tell any difference in ride quality or plushness. I figured for Chequamegon and on our trails, I'd like the stability of a wider tire both front and rear. Currently, the rig is still set up with Fast Traks and I am really impressed with their ride quality compared to the Bontrager Team Issue XR2 tires I rode last year. Wow! I tried the XR2 tires for 2 rides this season and I ultimately said "Nope." They had a stiffer feel to them and I didn't feel like they shed the mud quite like the Fast Traks. So with that, I opted to stick with what I became familiar with.

I really have enjoyed the 2.3 size front and rear. 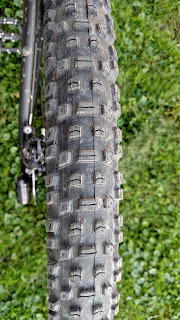 After PertNear 20 we put on Specialized Ground Control tires in the 2.3 size front and rear. Our trails can be pretty leafy and nut-covered in the fall months/early spring and we figured it would be good to try something with more blocked tread. We had a friend test ride the Specialized Epic Comp EVO and he really liked the control that the Ground Control tire gave him with cornering. Next spring I might try a Ground Control in front and a Fast Trak until trails are more clear of sticks/old leaves.

Current thoughts are the Ground Control tires remind me of the Bontrager XR3 Team Issue tires I've run. We went on a very leaf-covered trail in Dunning's and the traction they had were amazing (I was running about 19 psi front/rear.) I felt like going to this tread style was a good idea. I felt a bit more confident with descents and traction while climbing on leaves was great. Not saying that the other set up wouldn't have worked well- I've been super impressed with the Fast Traks, but it is getting to the time of year where I'd be pulling back speed. So we'll see how it goes with additional rides, but I'd say two thumbs up.

Change #4 was changing to a 30t Absolute Black Oval chainring up front. We did this right before Chequamegon as my S-Works Epic HT has an oval. I've only ridden oval on gravel and we thought that for a long ride (with an already questionable knee) we should stick with what my body would be used to.

I'm used to riding oval regularly on my previous full suspension, but I didn't notice "negatives" with the stock drivetrain on the Epic. The only thing that threw me off my game was during Chequamegon, my chain kept dropping on the front. It was super wet and muddy, and the grit that coated my chain wouldn't allow it to stay on the teeth of the chainring. We figured the narrow-wide design and my 1x12 setup was my downfall. I rode a wet Chequamegon with an oval on a 1x11 drivetrain and didn't have any issue with chain drop. I know that if conditions had been favorable, it would've been okay. I've since ridden McNasty with the oval on our trails and have not had an issue- I'm stoked to be back on an oval again for the trails!

Other Stuff-
I have the front fork on the Epic set to be fully open. Yes, I'm not maximizing the Brain technology, but I deal with chronic shoulder/neck impingement and I want as much forgiveness in the front end as possible. With that, I do not feel my ride quality is compromised. I had it set to open during Chequamegon and frankly, with bombing down some gnarly fire roads, I was grateful to have it set to open! I would say I'm a mixture of someone who likes to bomb down stuff blended with a slow/technical rider. I like to have as much control as possible, and I feel the open setting allows me to do that more successfully. I do not have it set to a slow rebound, either.

I run the rear suspension a little softer, too, but not fully soft. It's typically a couple clicks in from soft. Yes, you can feel the Brain shock open up when you hit bumps. I am great at tuning things out, and when I'm on a ride the "knocking" isn't a bother.

I have played around with the settings minimally, at this point, I've only ridden this bike on our trails and the Makwa trail in Hayward. The couple clicks away from the softest setting really makes me feel like I have efficient enough climbing to meet my needs. Keeps me planted on uphills and keeps me stable and confident on downhills. Yes, the firmer you have the setting, the more pronounced the knocking becomes. Yes. I did try the setting another click or two in recently and changed it back because of the knocking. I was feeling particularly sensitive that day and it did distract me. I also felt that I didn't feel as connected to the bike with it that firm.

Update: Before the PertNear 20, I put the setting one click firmer than usual due to the course including pavement miles. I've actually left the setting as is for the moment! I've not felt bothered by the setup or how the suspension feels when going over bumps. It handled the singletrack very well in Viroqua and so far at home, too. Experimenting is key and remembering what bugged you one day might not bother the next. 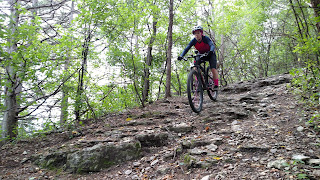 How Capable is this bike?
I rode down a super gnarly trail in Decorah on the Epic and was successful when I originally thought I would need a bike like the Specialized Stumpjumper or Stumpjumper ST to accomplish it. I did have the rear shock fully open for that trail, along with the front fork fully open, too. I was super stoked to find out how capable my bike could be- it's not something I'd do on a daily basis, but the occasional ride down Backbone would be fine and very doable.

All in all, for my riding I have been very impressed with the Epic and what it brings to the table. I've been out on some slimy trails this year and have been absolutely stoked about how it has performed. In my opinion, it climbs great- and I was surprised by how well the stock tire setup worked with greasy trails. (I often scope trails out during the season to update the Decorah Mountain Bike Trails page.) I would say I really enjoy having the 2.3 tire size front/rear, but having the staggered size worked nicely, too. It's great to have a frame that allows that option! 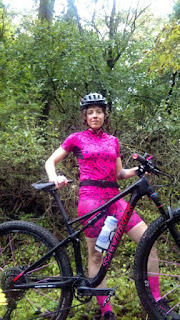 I never had the opportunity to take McNasty out on gravel rides, but I would say for the riding you experience at Chequamegon, he handled it like a champ. I never felt like the suspension was "too much" or "too little" with where I had my settings placed. If I were taking him on gravel I would put the Brain rear shock on a firmer setting. My hope is next year I'll have more opportunities to do so and really play around with the different settings to see how they change the ride.

While reading this review, please remember that I am not a professional rider. I'm just a woman who loves to mountain bike a LOT and race occasionally.

This is my first season really experimenting with the bike and I'm learning more just about every time I ride. McNasty will be a fixture in the fleet for years to come as he's nimble, efficient, and confidence-boosting. The Epic is a great bike that is capable of handling our local trails and more.
Labels: fearless women of dirt iamspecialized mountain bike Review S-Works S-Works Epic Specialized