I stood by the fire pit, essentially drenched with sweat and melted snow. My gloves were sopping wet, I had blisters forming on my palm right under my ring and pinkie fingers on my left hand. My socks were like pools, and I apparently had broken a hook for my bootlace, which is why my left boot was coming loose so much.
I finally had some relief from my cramping muscles. My stomach was into "instagest" and that hot dog made me feel human again. I talked to some friends, at one point Shockey said "This is the last time you'll be riding in snow this year."

This is it. This is my "Last Hurrah" of winter riding.

At some point I also found out that the other woman who had entered the race chose not to go around a second Dunning's Loop.
What did that mean?
There was still a spot open for a legit, second place finish.

HOW COOL would it be for the two local women to place in the PWC? Last year only one woman entered and placed (non-local)...this year 3 will enter and place, two of which live in Decorah! Yes...this was going to be awesome. I was going to be pleased as all get out to be 3rd, but to live it up and roll into 2nd...I was up for the challenge.

I walked over to Kirk and informed him I would be going back out. Literally in my head I said "Here's hoping!" Moffit asked if I needed to borrow some lights. Laughing, I said "NO!" and rolled out.

Another round of Dunning's was not necessarily what I needed, but it was what needed to happen to make "magic happen."
I was out there, alone. Physically and mentally I felt quite a bit better. My body was still worn out, but I had better energy from an actual hot dog than the GU I had ingested....however, one never to be TOO careful, I had one last GU. Anything to keep my motor running.

The trails were really becoming trashy. Slimy and sloppy, the snow was leaving and I did feel a sense of sadness. I guess you could say I wasn't ready for winter to be over quite yet. I felt like my chance for adventure was so short-lived. Now, in a matter of hours, winter was being cracked open like an egg on a bowl. Snow was melting, mud was exposed, and you could hear the sweet sounds of spring birds chirping away.

I came back to that hill on Lower Mother's Day and wondered how I would manage it this time. I got myself up to a mid-point, laid my bike down in such a way it wouldn't slide, and walked around it. I grabbed another tree, grabbed my bike by the "neck" and drug it up the hill. Success! No Bike Left Behind! (Travis would've killed me if I did.) 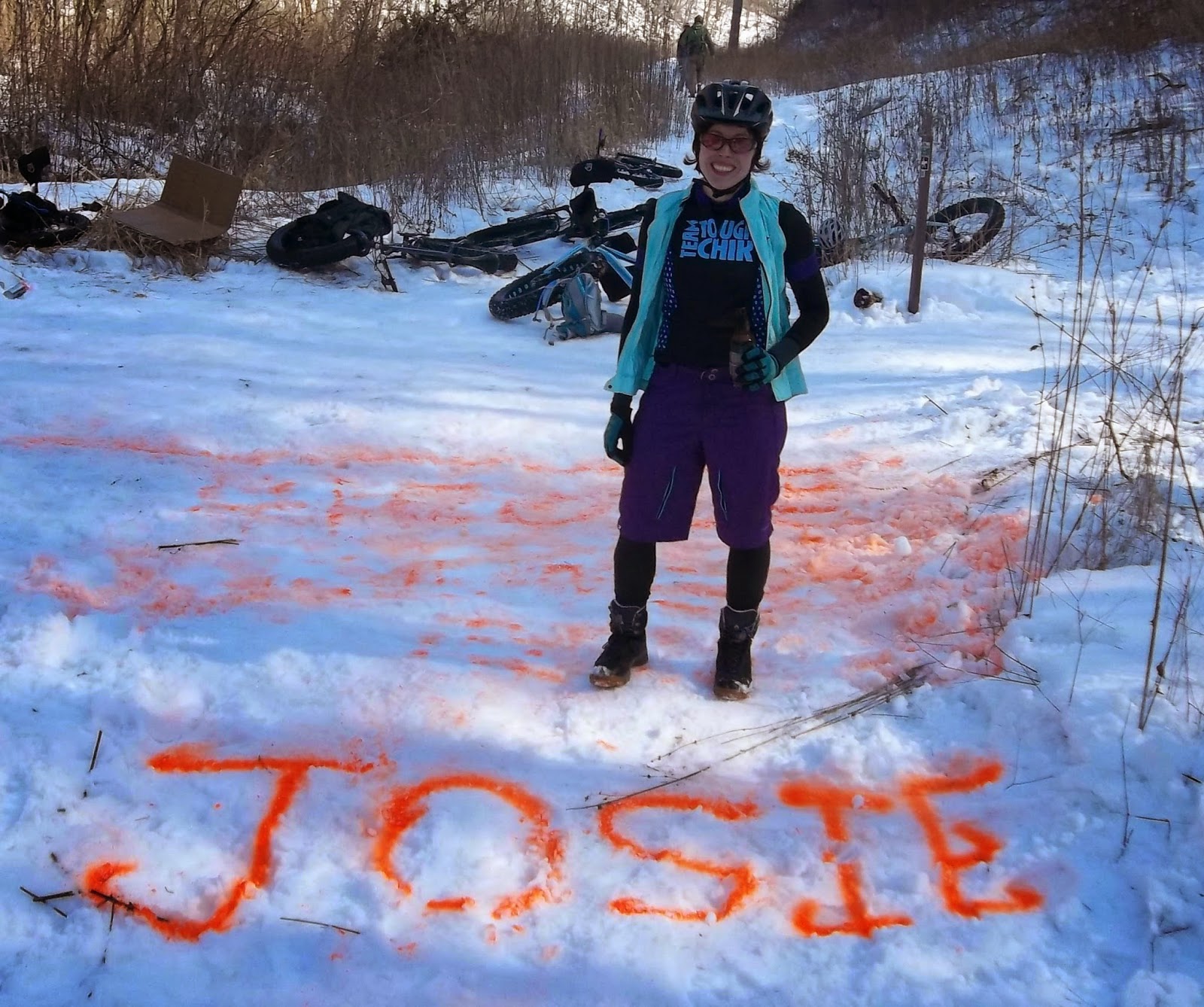 There was a lot of walking. My calves were tired, my ankles even wanted to cramp- but I felt like my trip around the loop was overall faster this time than last. Eventually I came to New Randy's once again- and surprisingly (I did not know this was such a thrill to many) but rode a good section of it that many others had struggled with. I had absolutely no idea what they were talking about, but okay! At first, on my way down, I felt like everyone must've left. I couldn't hear voices or carrying on of general festivities, and figured that someone would be down there waiting for me. Why did I worry? A whole group was still there, and as came down the hill, there was plenty of cowbell, hooting, hollering, and cheers! I'm somewhat shy and very humble by nature, that much fanfare was appreciated, amusing, and almost ...almost... too much for me. I loved it!

I rode across my name in the snow and Moffit brought over the cardboard that had names of riders on it who completed the course. I then asked "Where's my beer?!" I don't think I have had a Ruthless Rye taste so good.

Somehow I had mentioned to Moffit that it was my first race, ever. Also it was my first winter season fatbiking our local trails....aaaand that I was just starting my second season of mountain biking. All in all, what I did was a pretty impressive feat. I earned some kudos and maybe even some cred. Either way, you could say I was the favorite underdog of the day.

Soon it was time to pack up and leave. The Cellar would host the awards ceremony- I would have enough time to "gussy up" and change into dry clothes. I cannot tell you how AMAZING it is to put on DRY SOCKS. 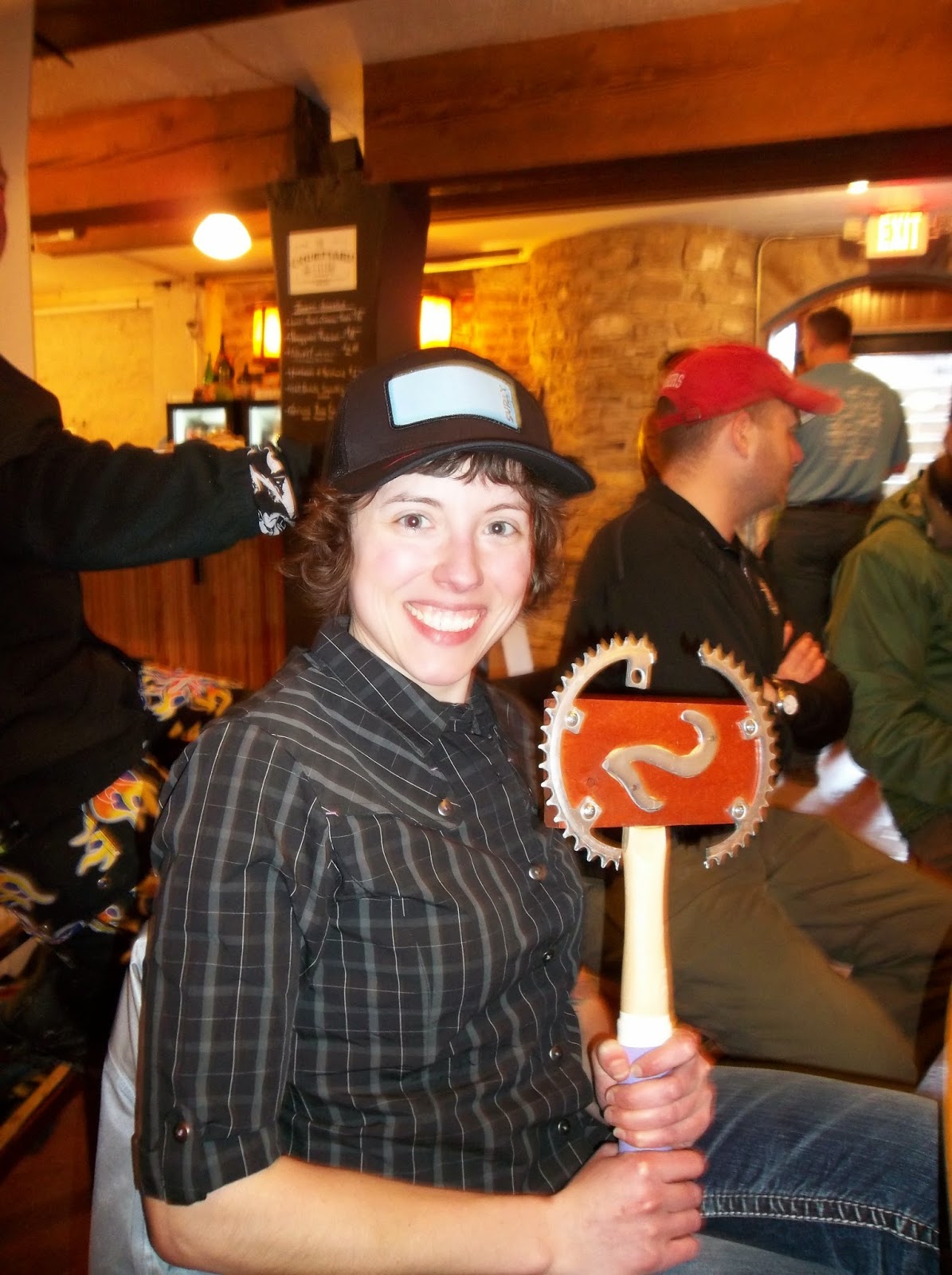 I got on my bike for one last ride (I made sure to inform Travis I would be driven home...these legs were going to stop pedaling pretty darn soon.) and made my way to The Cellar. Bike parked, I managed to waddle myself down the steps and get a delicious stout ordered up. Perhaps another hot dog and doughnut were eaten as well. Maybe another stout was ordered....all well-earned treats!

The awards were fun! Sov, the extremely entertaining guy from Surly was the announcer. Nothing makes a party more fun than if you have Surly involved.
Door prizes were also available, and in which case I was now a proud owner of an Ice Cream Truck shirt that would now act as a legit nightgown (seeexxxy) and a sweet, sweet hat. I haven't owned a hat in years.

Then, the icing on my cake? A super-cool, handmade axe trophy that would be proudly displayed on my mantle (or somewhere in my future house...where ever that may be) for years to come. Perhaps it will have a sibling axe next year.

Soon people were told to go outside. A small ramp was set up and the battle for the big axe would begin. I entered out of confusion, silliness, and a slight amount of healthy peer pressure. I was the only woman to volunteer herself and her bike to this. I will admit thinking "I'm an idiot for doing this" because a. I was not completely sober. b. the angle of this ramp was similar to what I went off of in 2012 that gave me stitches in my chin, and c. No helmet. (Oops. I wanted to believe my Surly hat would give me magical protective properties.)

None of the above were made to feel any better after I saw Lucas biff it.
I gave it a healthy try, and by default as the only woman, made it to the "limbo round."
This is where inexperience of how this limbo stuff works set in. I've never balanced myself on one pedal of my bike before, and today would NOT be the day to try it. Oh, a broomstick to the face, no less, and right then and there (or shortly after) is when Travis arrived! Ha!

Nothing broken. No blood. A cool axe. What more could a woman ask for?
Pizza.

I'm still in awe of what I accomplished on Saturday. For me, when I say I got second I know full well that there was another woman who could've earned it far faster than I did. I also admire the local woman who placed first. I came into the women's category knowing full (assuming) that I was not as skilled nor likely had as many years under my belt riding as they did. 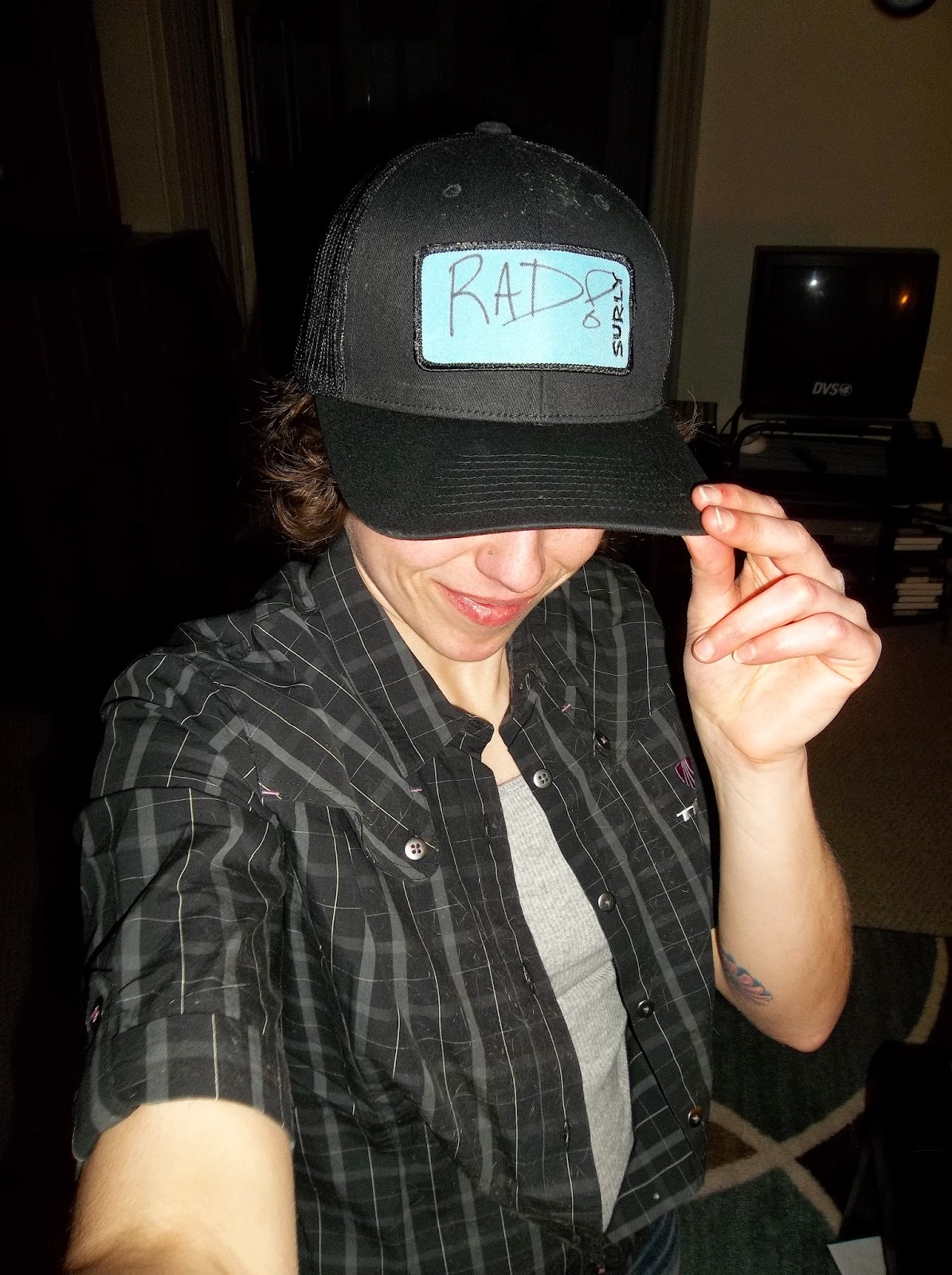 I cannot say how much I appreciated all of the encouragement, moral support, and help I received that day. It was really fantastic. All of my first-race woes were shot out of the dark. It was really fun to be around others who love riding, and were just there to have fun. I may never win first place (but this I do not know...) but I know I will enjoy my time with the fantastic group of individuals who came out to ride that day. I got to be one of three women to participate. I got to experience my first race on a beautiful day, I was able to challenge myself, and I was able to shed the self-doubt and insecurities that clouded me the days prior.

I'll see ya'll at the PWC next year! (And a good number of you I'll see at the Time Trials and Night Race.)