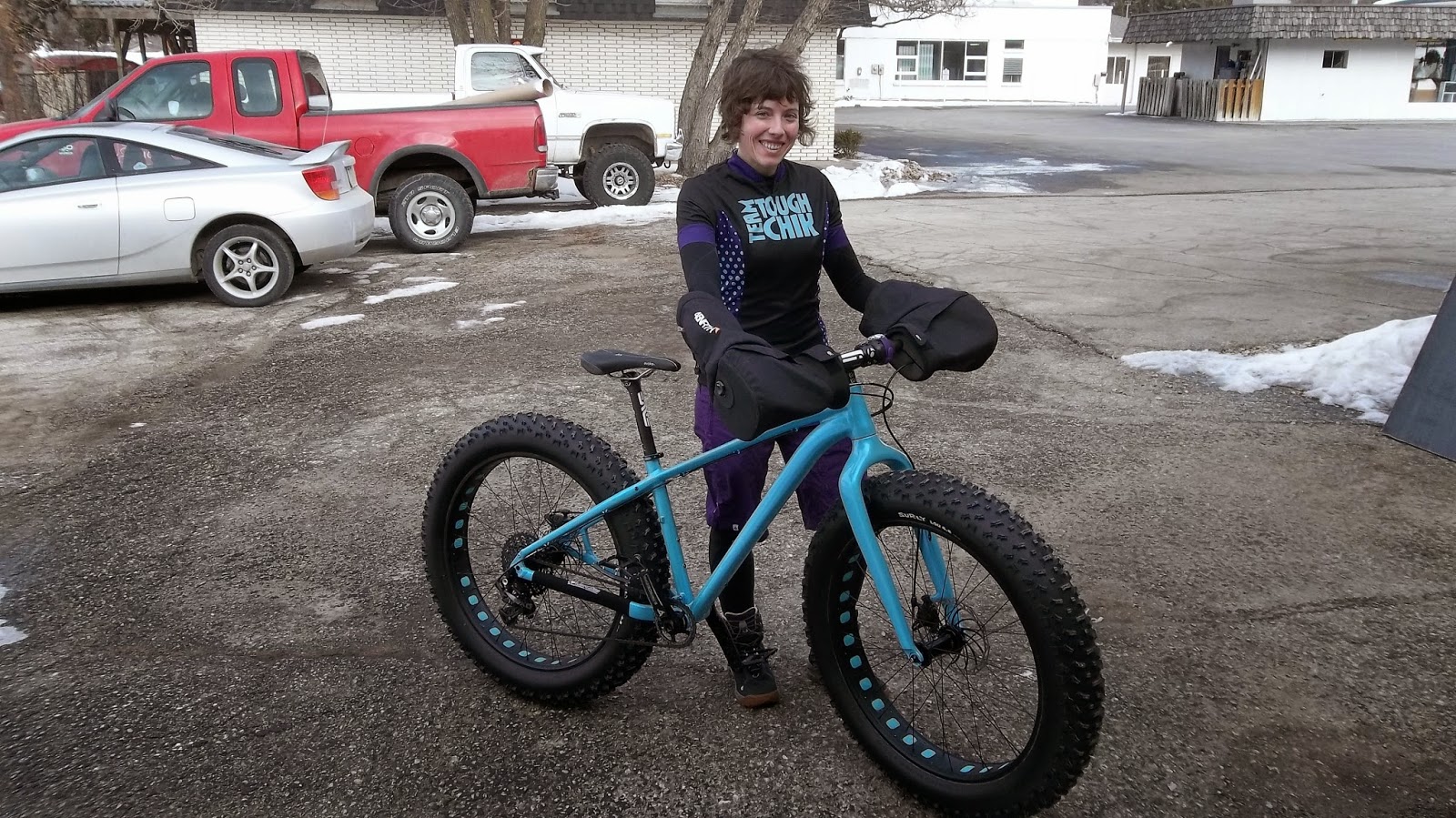 Saturday morning came and I was riled up and ready to go. Sleep wasn't easy to come by and I had bike riding on the brain when I did. My main focus was to have a singular cup of coffee, and eventually find a way to eat some of an energy bar a friend of mine had purchased for me. She was a dear and brought me a goodie bag filled with delicious treats. My stomach really didn't care for the thought of food, but I made myself eat half of it anyway.

I messaged a friend, I knew he'd be picking his bike up at the shop prior to the race. I figured he could stick around and/or meet me there and we could go to The Courtyard/Cellar together. Main reason? Park his bike next to mine, properly, so no one would improperly put their bike next to mine and scratch it, etc. (Travis' main concern.)

We went down to the Cellar and I registered. #459. Not a very impressive number...I'm kind of a stickler for whole/even numbers. What was I going to do? Put that bad boy on my bike!

A surprise came when Keri, a former co-worker, had stopped down! She knew Lucas was going to be participating, and also wanted to come see me as well. Oh it was fantastic to see another friendly face! 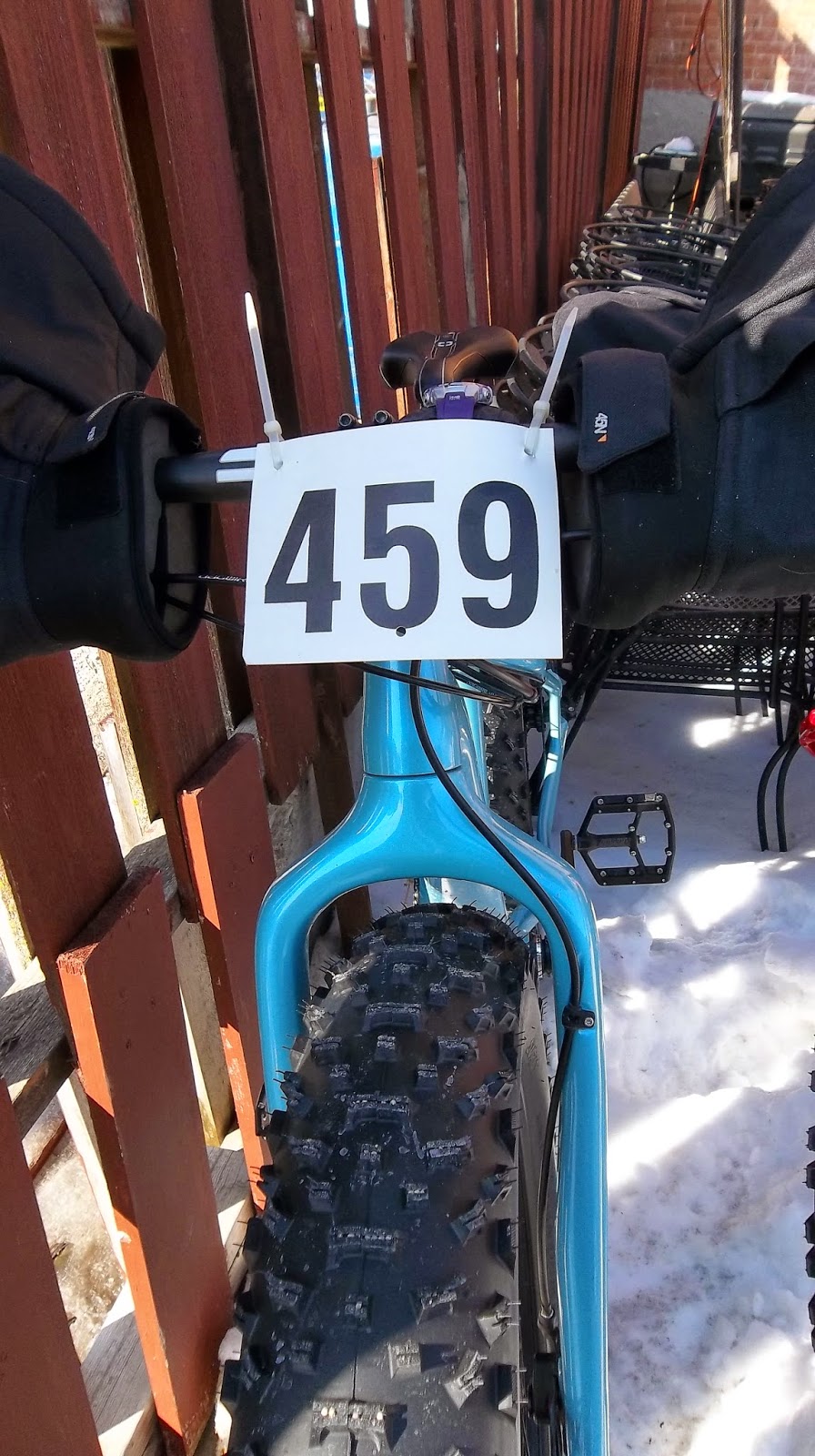 I saw another woman show up and register. I wondered how many would show up- I had been told another local woman was likely going to race, so that would make 3. The "Facebook Event" said about 4 would show up, but really? You can't completely count on that. Last year one female participated, so I was eager to see the numbers up, but I couldn't help but wonder about the competition. Not that I was racing to compete, far from it. Tho I did find it appealing that I could potentially take home a really awesome axe trophy for my first race, ever.

After registration was over, there were three women who had entered. I'm not sure on the total number of participants- but it was over 20.

The weather was fantastic, and apparently this was likely the most singletrack that the PWC ever had during a race. If you think about it, this was the 5th year. Other years there was unfavorable weather and/or fatbikes really hadn't caught on yet. There was over 12 miles of singletrack and around 1,800 feet of climbing scheduled for the day. This would be a challenge as there were numerous tires running over the sun-warmed, snow-covered trails.

It was time to start and we made our way to the entrance of Palisades. We would take our bikes over the rope and ride up the road taking a left, to head up an even steeper hill. This hill I could not fully climb when Travis and I explored a possible trail route on Tuesday. However, when you came to a point you would veer right and go onto Lee's Loop. This made the climb a bit more doable for me, and I suppose some adrenaline as well.

For awhile I was behind Nikki, the other local woman who had entered the race. Even more petite than I am, she's a complete badass when it comes to riding. I was surprised I managed to stay behind her for awhile, but then I got to a point where I lost my mojo and couldn't stay on my bike for a bit. I struggled with footing and traction. Nikki was gone and I was falling even further behind. I can't lie and say I wasn't slightly disappointed in myself, at least for a bit.

The initial concerns I had of messing up those behind me started to come into play. I was extremely nervous and scrambled out of the way as quickly as possible. Then, the most magical thing happened for someone experiencing her first race- the kindness of those behind her that didn't feel the need to hurry past.
Encouraging words "You're fine, take your time!" were said and I was given the blessing to continue forward without having to step aside.


Eventually I let the nice folks pass me, I was coming to a trail that would be challenging for me and I knew that I would be off my bike probably more than I wanted them to see.

I made my way through Dead Pet, finally making it to the gravel and headed up the road to IPT. The trails in the Van Peenen area are my favorite and I felt like I might have a slight leg up, potentially redeeming myself and keeping my being last at bay. Eventually I came to an incline on IPT that gave me a run for my money, my foot slipped and I found myself doing a dramatic "splits" off the side of the trail. A nice man in yellow asked me if I was alright before he continued on. I scurried as quickly as I could to get back on my bike and keep going. North 40 was next. I stopped for a bit to have a quick recharge with a GU before heading up the hill. Another rider towards the end came up on my tail and I made myself go quickly forward. Up Gunnar, to Julia, and then onto the fire road and up to the pines. In the pines I caught up to the man in yellow and kept up with his pace. It was a comfortable pace for me and I didn't want to go faster, even tho he offered to let me pass. I didn't want to gas myself as I knew what was yet to come. Also? Time was looking good, I wasn't sure if there was still an hour and a half cut-off time- but if there was, I would be well in the green.

Little Big Horn tripped me up. The last man caught up to me and I let him pass as I started to fumble and had a hard time keeping myself on my bike. This was the most I've ever pushed myself in a ride, my body wanted to retaliate a bit. Eventually I came to Rocky Road and let myself fly a bit; being careful as tires had rutted up the snow a good amount and I didn't want to crash.

I came to the section that I normally start slowing down at, I wanted to keep some momentum going, and then my tire went out from under me. (PLOP) I landed face/chest first into the snow. HA!

I picked myself up and kept going as I knew I wasn't hurt and pedaled forward. I made it to the fire pit in under an hour and a half. Yeah! I continued on, fatigue was setting in and there was a hike to take.

I stopped to have a GU. The last fellow who passed me came up behind, he looked tired. I asked him if he wanted a GU as well....there. I rectified my personal grumpus feelings over not being able to stay ahead and made "good" on my end with a peace offering. I made my way up Old Randy's, each step I tried to keep weighted so I wouldn't lose my footing. If you want to feel exhausted, push your bike up a steep hill when you're gassed.
At the top I took a hit of my inhaler and proceeded to make my way. I was last and I was fine with that.

I was able to ride the upper Dunnings area okay, but will admit to taking it easy down Wold's. I had never been down to the very bottom of it, and there was a sharp left turn to worry about. Had it been snow-covered perhaps it wouldn't be so much of a factor, but by the time I had gotten to it you could sit an expanse of large roots and rocks to roll over. Wet rocks/roots and I should just not be in the same room together. I didn't want to take chances, so I walked it.

I head up Lower Mother's Day and eventually came to an area that completely screwed me up. It was an uphill climb that I couldn't get a sure footing on, and all I managed to do was slip, slide, and practically do the splits while holding my bike up. Shockey was kind enough to do what I considered a "sweet bro move" and stabilized my bike for me while telling me to grab a small tree to my right. That was just what I needed to drag myself up and keep on going. (of course, letting him have the right of way as soon as he got up the hill himself.)

I made my way to Captian's and then towards Lower (New) Randy's. The way down Randy's was pretty much just straight up walking my bike most of the way. Eventually Kester came up behind me, I let him pass, and we would continue to try riding what we could. Finally, I was off of the hill and made my way to the finish line. My toes had clenched up and I was completely worn out. Moffit and Co. asked the question to end all questions..."Are you going back out?"

Moffit I felt, could see my exhaustion and asked me if I needed food. A hot dog was in my hands within moments and I annihilated it...now...it was decision making time.

And with that, I shall conclude Part 1 of the Race Day Adventures.

Ready for Part 2? I bet you are! Click here.