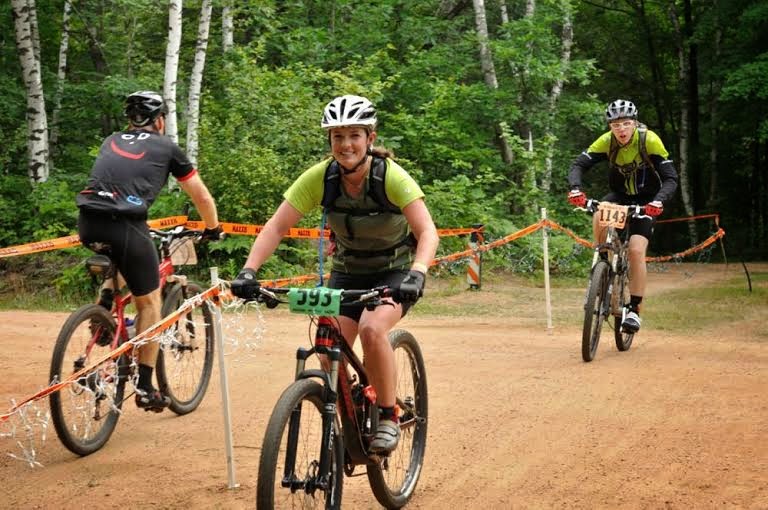 When did you first start riding a bike?
I learned to ride with training wheels as a kid (then one day, trying to be cool in front of my babysitter, I proclaimed, "I don't need these things!” discarded said helper wheels and took off down the driveway). I didn't start riding seriously until 2006 when I moved to Flagstaff, AZ to work as a nurse.

(I had, however, attempted a couple mountain bike rides while I was a student at Luther in Decorah.
I had no idea what I was doing and was pretty terrified at various points.)

In Flagstaff, mountain biking is the big thing and felt like I had better join the culture. I moseyed on down to the local bike shop and walked away with a sweet new hardtail, which I did not know how to ride off road.

What motivated you to ride as much as you have over the years?
Fitness, comradery, and being outside. The fast downhills keep me coming back as well. The uphills...not so much.

What kind of riding is your favorite? (paved, gravel, mountain)
Easily mountain biking, although there is something to be said about a nice countryside road ride. My husband tricked me into getting a road bike a couple years ago and it has been a mostly positive experience...except the occasional bug clouds. No one likes a sports bra full of sweaty, dead bugs. And the cars. I am scared of cars.

Do you remember how you felt on your first mountain bike ride? (If not a mountain biker, how about first commuter ride, paved trail ride, gravel, etc.) 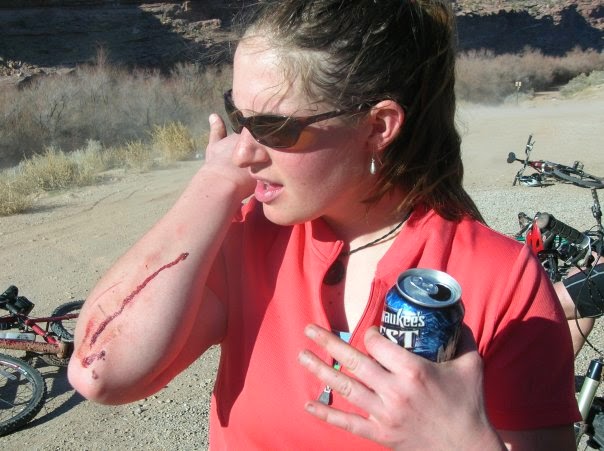 I felt the same way on my first handful of mountain bike rides. It was a lot of, "Holy crap, there are rocks everywhere! How do I ride over all the rocks without killing myself?!" I ended up riding alone to practice a few times in Flagstaff before I would even consider going with anyone else. There was a lot of blood and bruises involved. Then I agreed to go with a couple experienced riders who took me on a way-too-advanced-for-my-skill-set ride, which landed me in urgent care with a messed up wrist. I was a little too big for my britches back in those days. I'm much more in control/discriminating now.

If you had nervousness at all, what do you do or think to overcome it?
Practice, practice, practice! And it does help tremendously to ride behind more experienced riders who will slow their roll for you; watching/mimicking what they do helps you to improve and gain confidence.

Do you use clipless pedals? If yes, what are some tips/suggestions for beginners that you would share? If no, are you thinking of trying it out at all?
Yes, and I can't imagine going on a road or mountain bike ride without them now; it is much safer and more efficient. Learning clipless pedals was a VERY steep learning curve for me (maybe I'm just a little slow on the uptake) and I crashed constantly until unclipping became habit. I would suggest practicing in the yard or on another forgiving surface until it becomes more of an instinct. Or just ride up a mountain road, get really tired, and then tip over from a standstill in front of your new lady-friend riding buddies...twice. That works too.


I'd love to know a bit more on when you started competing, what inspired you to do so, and how it makes you feel!
I have only done two bike races (both times, it was a mountain bike race on a four-person team), the first being in 2012 and the second being last summer. (I have less than zero interest in ever racing my road bike.) I had been somewhat interested in racing for quite some time, but I felt intimidated and nervous about not finishing at least somewhere in the middle of the pack. (I'm not a "I'll be happy if I just finish" kind of a person.)
Also, all of my earlier years of mountain biking were spent in the mountains of Arizona and Montana, where the terrain is pretty non-forgiving. I just never knew if I was really ready. My friend, Dan, and I used say we were going to do some race near Bozeman, but we would have to pack a bunch of sticks to shove in the spokes of all the little kids who would pass us. Obviously, we were feeling really fast. ;-) I finally registered for a race when I had other ladies to race with here in the Midwest. My fear of being last vanished and I knew we would have a good time, regardless of outcome (not that I didn't give it 110% while I was on the course).
I am so glad I took the opportunity to participate as a racer and not just as support. I loved the experience, had a great time cheering on my teammates and hubby, was proud of my performance, and felt empowered by the results I saw when pushing myself as hard as I could (which I basically never do when I ride just for fun). I'm not sure how quickly I will be able to get my fitness level back up after baby, but I am hopeful to do a race again in the fall. If not this year, then definitely next summer.

If you are a commuter what are some of the challenges you face and how do you overcome them?
I have never really commuted much by road. I used to ride some single track between my house and the hospital when that was an option, but the overwhelming majority of my commuting has been via car.

Do you commute even if the weather isn’t ideal? Why or why not? If yes, what do you do to make it more tolerable?
Yes...in my Outback.

Have you had a bike biff? If so, how did you recover on a physical/mental/emotional level?
I used to crash literally every ride. It was partially a product of riding trails above my skill level (how are you going to learn if you don't?) and partially from being a bit (incredibly?) reckless. I recovered quite quickly mentally, but that is because I was young (early 20s) and my brain wasn't fully developed yet (as my husband and I like to say). I used to think all my scabs and scrapes were cool battle scars, but now I find them annoying. I demonstrate considerably more judgment when choosing what to attempt these days; that and my skill set is greatly improved. I still go down every now and then, and it does throw off my mojo, but I forget about it by the next ride. 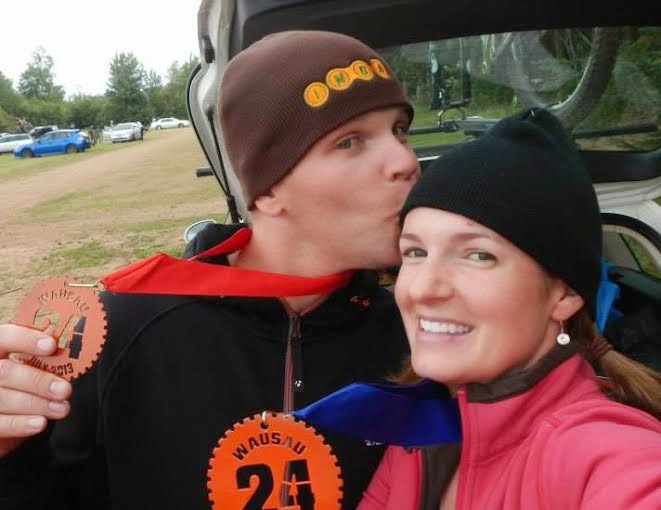 What do you love about riding your bike?
The same things that have kept me motivated over the years: fitness, comradery, being outside, and fast downhills. A beer in the parking lot afterwards is a big positive as well.

You were biking before you met him? Was he at all a lead into competing or did you start that on your own?

I started biking regularly in 2006. We met in 2011 in Madison through mutual friends in the bike industry (he is an industry professional). Our shared interest in riding has been a foundation piece of our relationship, as we both love exercising and hitting the trails together. As far as racing is concerned, I like to take all the credit for starting to compete occasionally. Although, him being registered for the same races on men's teams was probably a factor.

Did your husband introduce you into a different style of riding? (like Road?)
I had self initiated a few road rides prior to spending time with my husband, but he encouraged me to get my own road bike and learn how to ride it properly. (Who knew there was actual technique and strategy involved? I thought you just pedaled down the road.) "Ride it properly" lessons can be quite a challenge, as I don't take well to instruction from my significant other (which is ridiculous, as I could learn a ton from him, as he has an extensive racing history). Some of his helpful tidbits still trickle into my brain, even though I get pouty about constructive criticism when I am tired/hungry (which I most of the time I'm on my road bike).

Do you and your husband go on rides together often, or do you have separate rides? 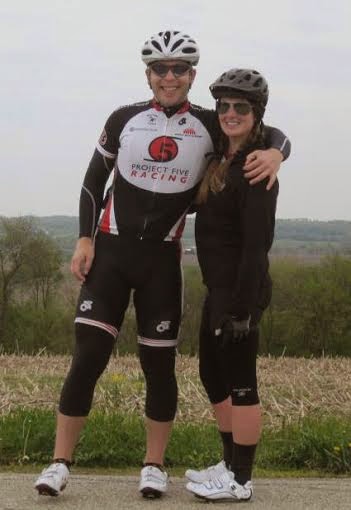 Prior to my pregnancy kicking into gear, we tried to ride together as much as possible. He tells me that I am his 'favorite riding buddy', which is very sweet. However, he is way faster than me, so we make sure he gets out with the A-team when he can in order to zoom around at his full potential. I really enjoy most of our mountain bike rides together (probably because I feel pretty skilled and like I can somewhat hold my own). Road rides together are a crap shoot, as he likes to ride efficiently (which means pedaling faster than I feel like pedaling sometimes) and I would often prefer to lay in the grass and take a nap.

I don't take particularly well to criticism from my partner, whether it be of the helpful or frustrated variety. :-) I found some friends in Arizona to ride with that were way better than me, but were also very patient...and were not my significant others, which meant I let myself take direction from them much more agreeably. It's all very silly. I should just let myself learn whatever I can from whomever I can, but that seems to be easier said than done sometimes.
I was 23 when I started and still found it to be a pretty steep learning curve. But it feels so great every time you obtain a new skill, no matter how minor! I still get excited about it. Mountain biking just keeps getting better and better as you improve and build confidence.