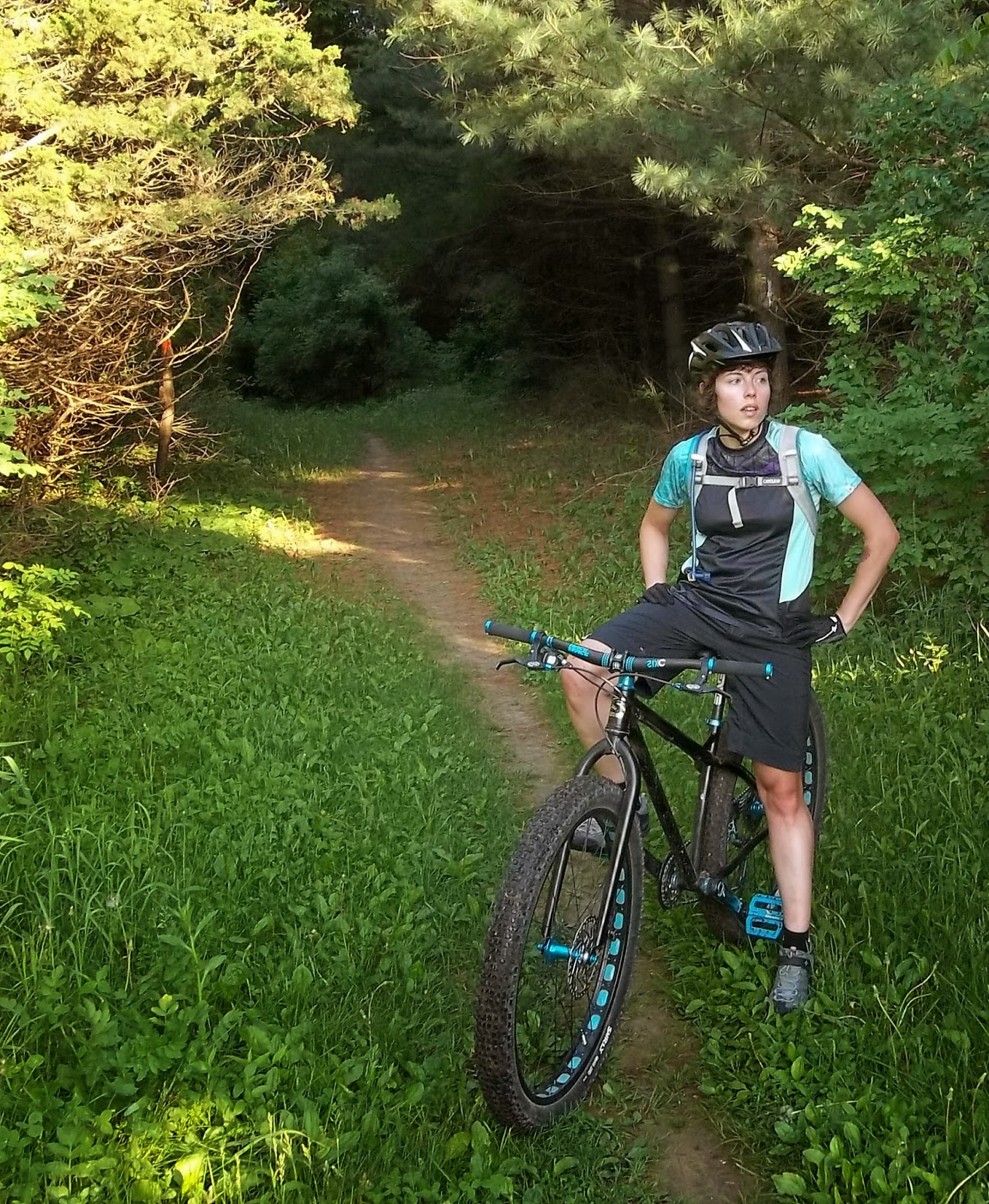 The trails had been slimy and I had made several accomplished climbs. My handling skills are becoming better and I’m gaining praise from Travis for my efforts. I even went over a log I had walked over the past few times. It wasn’t very graceful at all, the hard “bump bump” as my front wheel went over the log and down.

You know the wheel will land somewhere; it’s just letting your bike do the job it was intended to do. (Leaning back helps keep you from going over the bars, a handy tip.)

But what really rattled my cage was going down a steep incline where there was a large root and drop-off. The root you would have to treat like the log, sure, not a big deal?

I was scared. My core was screaming out “You can’t do this!” where the other part of me said “You can f’ing do this! Travis has given you so many compliments tonight, why would you not try?”
You had to approach this downhill by sitting as far back on your bike as possible. When I say far back I mean the butt of my saddle was pressed into my gut. As you come to the root you have to move your arms so you avoid a tree and go around a corner.

It took me at the very least-5 tries. I had Travis come with me and go in front of me each of those times. I’ll admit, I sounded really grumpy to him…it was my trying to keep myself psyched up. Not only this, but we were to go to a concert that evening and this was taking up precious time. I wasn’t mad but I sure sounded mad. I wanted to cry but no way in hell would I let myself cry.
I felt like if I gave up on this spot it would take away all positive reinforcement I had been given. I realize that’s harsh-but things typically do not come easy to me. I wasn’t going to give up without a damn good fight.

I did manage to get over the root; I had maybe a tear or two of relief. I couldn’t fully make the next corner but that didn’t seem like a big deal to me…the root was all I cared about. 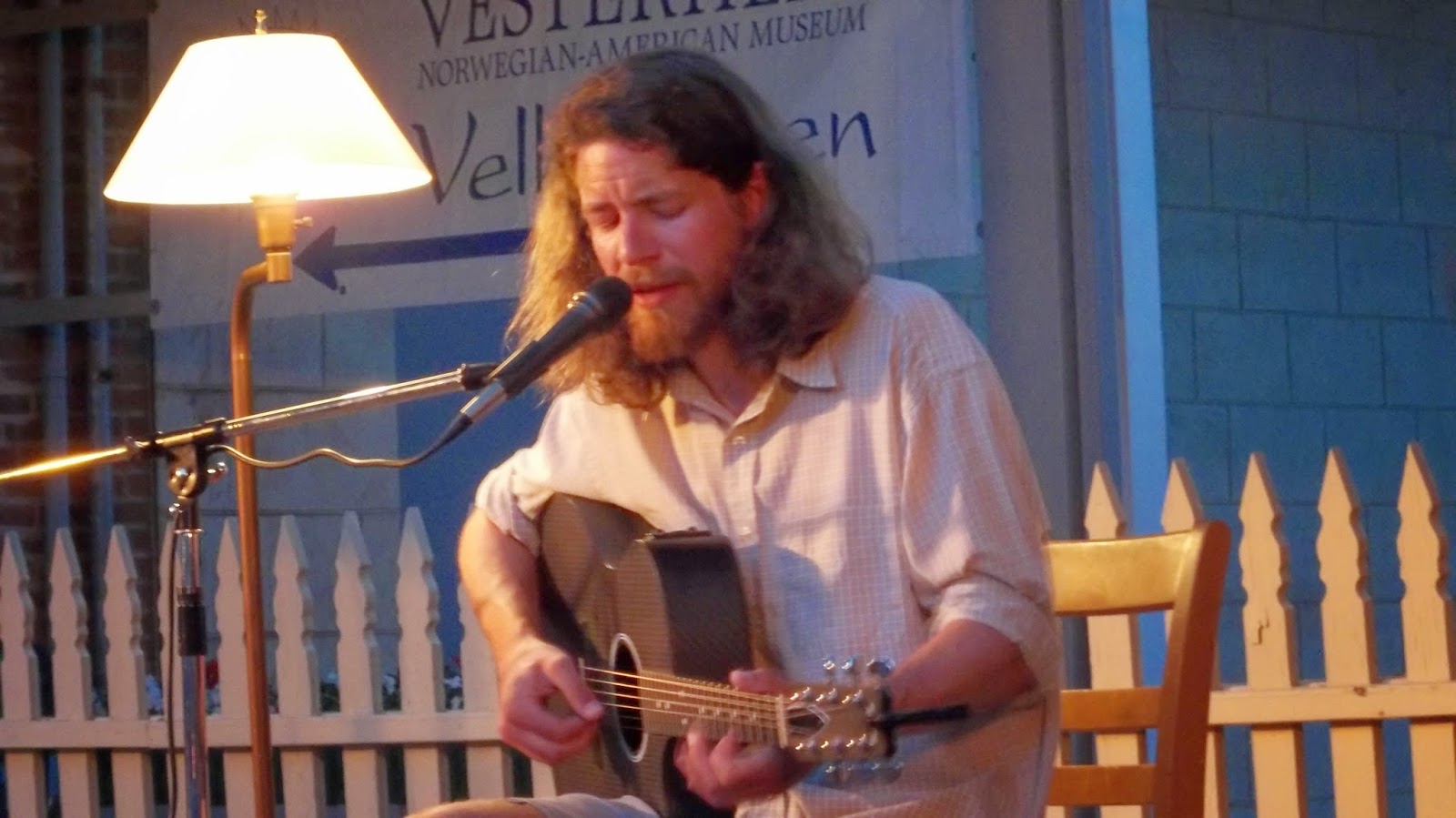 That night we went to see Paul Doffing perform at ArtHaus for his Freedom From Fuel tour. As I watched him play his guitar I realized that mountain biking was reminding me of the past.
As a kid I wanted nothing more than to learn how to play a guitar, my dad found one in a local dumpster that wasn’t in too terrible of shape. He took it in to get new strings and gave it to me, I was a bit disheartened since it wasn’t an electric guitar, just an acoustic.

I was given a book of Christmas songs, but I didn’t have the foggiest idea on how to read music. We had a small portion of music class donated to learning some chords; I did my best to practice on my guitar at home. Dreams of being a musician swirled in my head, only to collapse as quickly as they came.

I had lost complete and utter interest. I had no one to help me, motivate me, and encourage me to keep learning. I fumbled and bumbled over everything and found myself frustrated over the concept. So I gave up.
Watching Paul play the strings of his guitar made me think of my mountain biking prior and in general. I keep practicing, I get better, and I enjoy it. I’m not alone with this now, I have someone to help me and encourage me. It makes me happy to see myself improving with something-even if it’s something I have to keep practicing at. I'm making a dream come true.