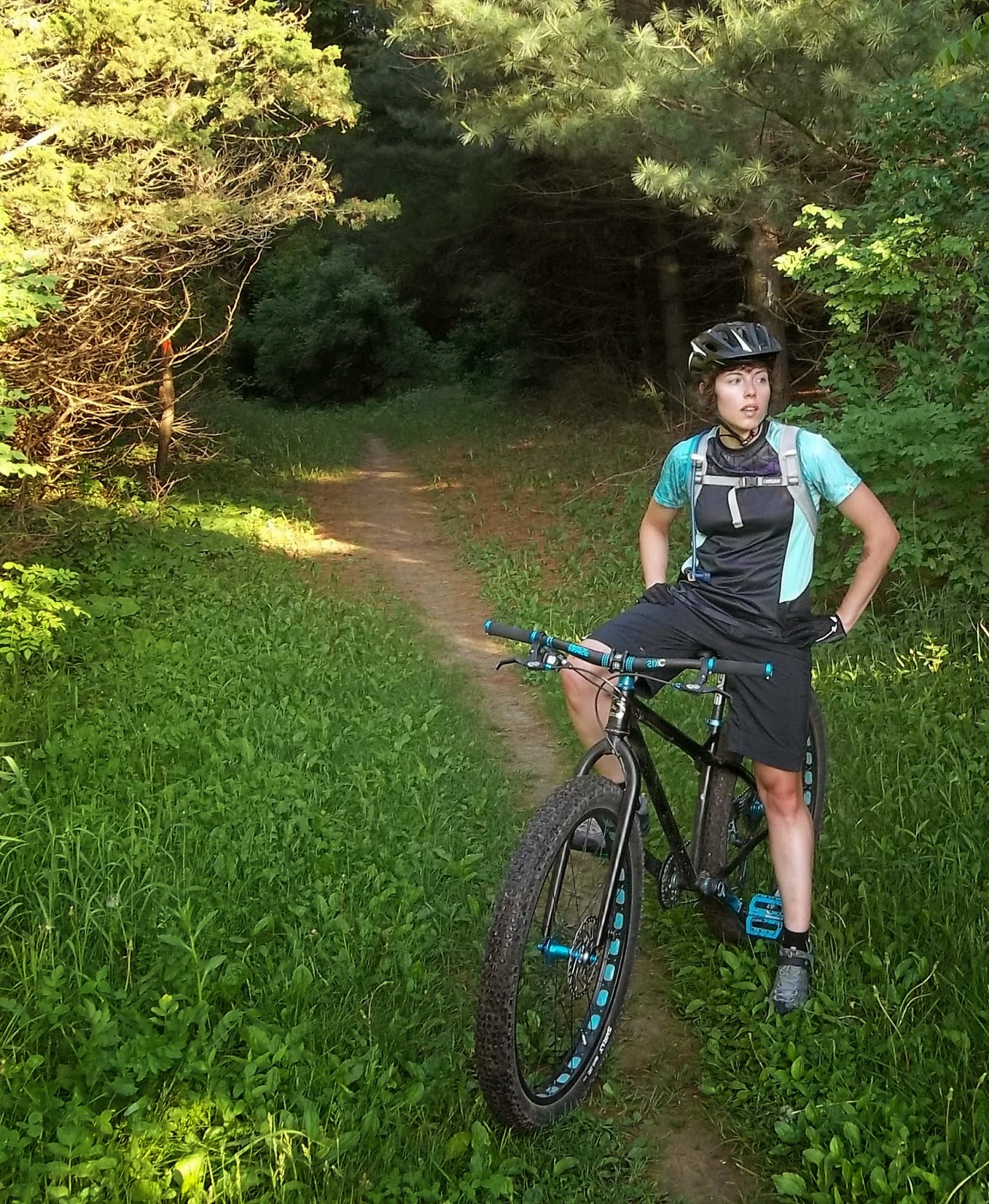 There is a great website that has been started up called Wheelwomen Switchboard, set up specifically for bike riding women to ask for questions, advice, or post offers-think bikes, saddle swaps, jobs, etc.

One of the questions I pondered was about how a woman’s menstrual cycle can affect her riding. Fatigue was #1 on my list and product use and disposal was second. I’m hoping for a couple longer rides this year and I firmly believe that my luck is not secure. I would rather plan for the worst case scenario of cramps and exhaustion and learn how to manage that rather than hope for the best.

So I took to the board to ask women "How do you deal?"

I received great suggestions from several women on the Switchboard about what they do for preparation of their period, dealing with it, as well as what they use for products. There should be something beneficial for just about every woman in this post!

Sonia D: I have climbed up a volcano with my cup in (all day outing, no facilities) and didn’t have to empty it until I got back to base that night. LOVE it.

Rachel D: I pretty much always get my period for long rides and camping, so I am well accustomed to changing menstrual products on the go. In my usual life I use the Keeper and cloth pads, but while camping/biking without facilities I prefer the ease of tampons.

I did the Pittsburgh-DC trail ride for 6 days on my period, and like you mentioned, I used ziplocs to keep everything under control. I kept clean tampons and toilet paper in one ziploc and then had a few ziplocs for dirty tampons. I just rolled them in toilet paper and they were fine (and didn’t bleed through the toilet paper, but I used a lot, haha) until I found a garbage can. I put everything in a small cloth bag and stuffed it in my pannier until I found a trash can. All good!

If you won’t be taking panniers but you’ll have a frame bag or seat bag or something, I bet menstrual supplies would fit in it.

Velo T: Regarding menstruating during a century, snip the string of the tampon so it is very short to eliminate chafing. Also use a chamois butter cream to make sure you don’t chafe. There is nothing worse than chafing on a century because you have to keep riding even in pain. And find a bathroom, or outhouse along the way. There is usually something along a 100+ mile route, like a gas station, outhouse, or restaurant to change it up. If you are doing an organized century with rest stops, they will most likely have an outhouse or bathroom.

Holly S: Old coffee bags (the wax lined ones) have served me well when cycling/hiking without amenities. If you have a few lying around that aren’t otherwise being reused, consider them for a discrete storing option.

April S: Thoughts for you on the energy side from a somewhat wimpy rider (me!). Iron supplements and an iron levels test - you may have some anemia that you notice more when your iron stores are so obviously being depleted. I like iron in a cream form because it absorbs fast and I can actually feel it - but if you tolerate a pill, much easier on a bike ride.

K.A.: Eventually I noticed it my period and thought maybe I was slightly anemic— which I was . My body didn’t have the iron it needed to do things, hence the huge fatigue. I’m not vegetarian, but I didn’t and don’t eat a lot of meat. I began supplementing eating foods high in iron. I changed my breakfast back to Cheerios (45% daily value in 1 bowl) or oatmeal (25% DV in a bowl) and discovered Trader Joe’s has a 0% fat Greek Yogurt with 11 % daily value of iron in 1 serving (pomegranate flavor). I also went hard core on leafy green vegetables too– not salad so much, but kale, spinach, chard, mustard greens…things like that.

April S: I also love green morning smoothies for upping the iron-rich veggies; stir-frying and all sautes in cast iron pans, and more iron-rich foods around my period in general.

Velo T: Regarding fatigue, I increased my intake of iron rich foods on a daily basis. I eat a ton of kale and spinach, and beef at least once a week, especially during my period. Molasses in my oatmeal instead of other sweetener. Before a long ride, I will eat an entire beet, they are a great endurance food. Also, I turn up the water and carb intake for the three days prior to the long ride.

Nutrition on the go:

Sonia D: As far as tiredness, I am lucky that’s not something I suffer from–at least not something I specifically suffer during my period! Lots of gels and Gu have caffeine in them though. You can bring some along in case you bonk.

April S: I like Guayaki Enlighten Mint for energy and fluids replenishment (and the taste). And rest stops when you first feel the dip coming on rather than when you are exhausted.

Velo T: Make sure you are replenishing your electrolytes with a healthy supplement during the ride, I like GU Brew, or Nuun. They don’t leave me bloated with sodium like Gatorade does. The GU and Hammer gels are great. I usually take a couple of the espresso ones with me. I find the caffeine is a big help at the 50 & 75 mile mark to give me that extra boost for a strong finish

Rachel D: As part of that PGH-DC ride, I rode for 90 miles one day on my period, and it poured for 45 miles of it. I definitely had a little cry for five minutes on the side of the trail!

K.A.: I think nutrition had a lot to do with it. This season I’m riding even more and I am careful to put the right kinds of food in my body and sufficient calories too, to do all I want.

Emily S: A friend of mine just gave an amazing presentation on the menstrual cycle - the WHOLE cycle, not just the menstruation phase - and it really expanded how I think about my body and my cycle. It was totally empowering! She talked about what’s happening during different phases of our cycle, and how that factors into our emotional state, energy levels, etc. She also talked about how, if we pay better attention to our bodies, we can use this to our advantage. For example, during ovulation, you typically have lots of energy and positivity and charisma, so it’s a great time to interview for a job or delve into a project. The luteal and menstruation phases are great times for reflection and introspection. Every phase is important and can help us achieve different things in our lives.

The big takeaway was that we need to stop listening to the message in our patriarchal society that our menstruation makes us irrational and crazy, that periods are nothing more than a painful inconvenience, that we should feel ashamed when we’re emotional - in short, that we should feel ashamed of being women. Instead, we can celebrate the wisdom that comes from the sense of flow and changing perspective, respect our bodies’ changing needs and energies, and feel powerful and wise because we are women!


Ever since that talk, I’ve been taking more notice my cycle and how I feel during different phases, and I’ve been much better at listening to my body and giving myself “permission” to rest when I need quiet and introspection. I feel totally empowered to listen to and respect myself and my feelings, instead of blaming my uterus for making me an emotional crazy lady and totally discounting feelings that are actually really important.