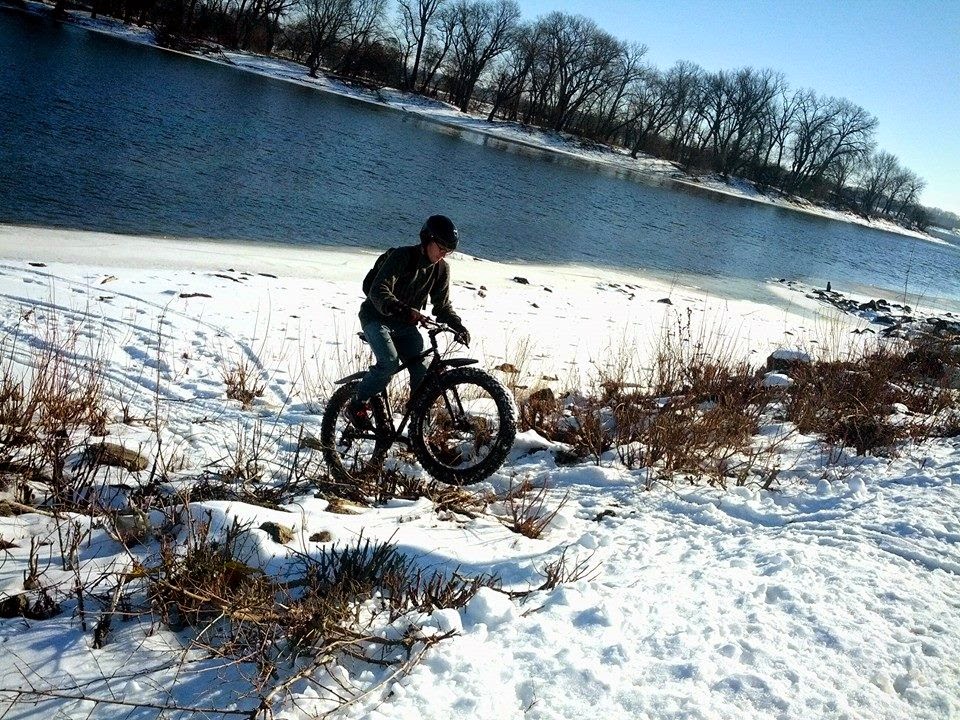 My name is David James Glover. I am from eastern Iowa and started wrenching on bikes professionally this past March at the Trek Bike Store in Davenport. I then got offered a job of a lifetime in Copper Harbor, Michigan (pop. 86) working for the Keweenaw Adventure Company.

After an amazing summer in the Upper Peninsula of Michigan I accepted a job at Moab Cyclery, in September I hopped on a bus in Michigan, a train in Milwaukee and eventually got my bike, a few possessions and myself to Moab.

I love to get out and see the world from the seat of my bike every day; I feel it has been a wasted day if I do not. I like to race, adventure ride, group ride, commute, and generally rip trail!


“Experiencing the world through endless secondhand information isn’t enough. If we want authenticity we have to initiate it.” -Travis Rice

When did you first start riding a bike?
I rode bikes as a child but did not pick it up again until June of 2012. I picked up a $50 ‘82 Schwinn and started road riding with my buddy and did RAGBRAI that July. In September we found out there was local singletrack that rocked (Beverly Park in Cedar Rapids, Iowa) and we both decided to get really cheap old mountain bikes. I then moved to Davenport, Iowa where there was more singletrack, I then met up with the best mountain bike group in the world, QC FORC or Friends of Off-Road Cycling. I have been hooked since. 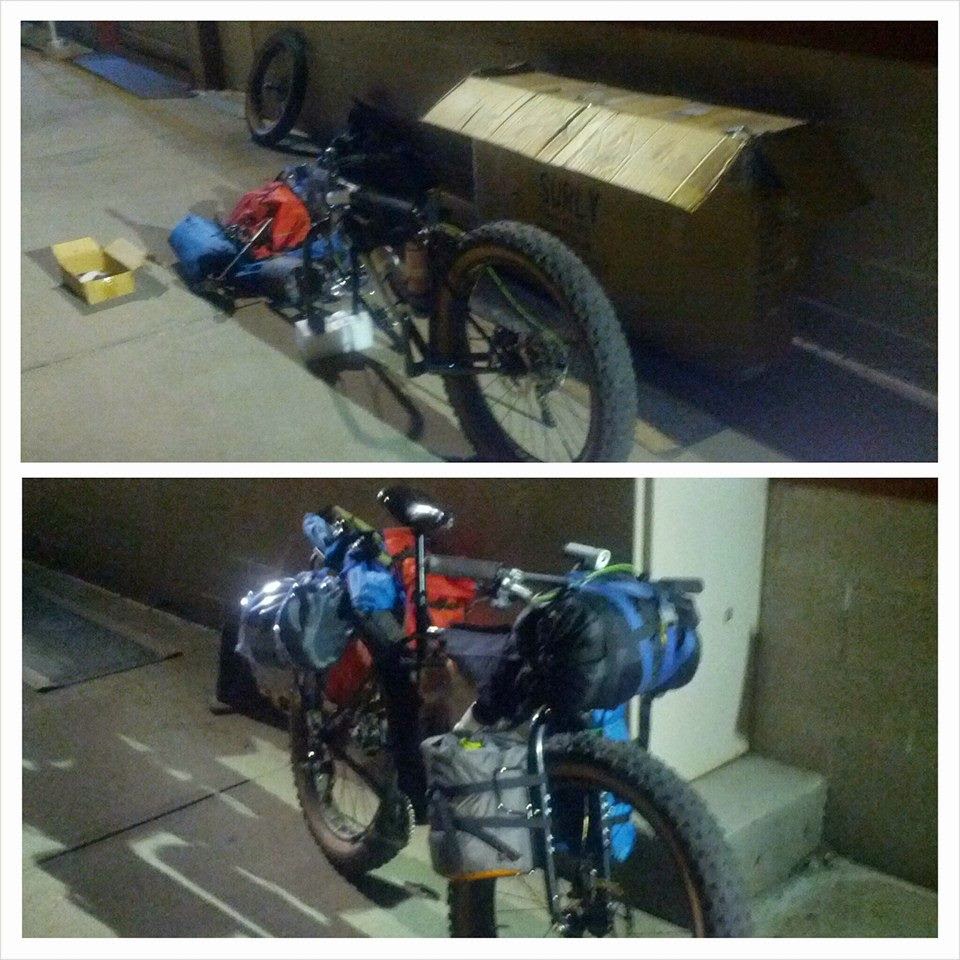 This was when I moved to Moab from Copper Harbor. I got off the train in Grand Junction, grabbed my bike box and put it together on the platform. Everything I brought with me right here. I hung out and camped in the Grand Junction and Fruita area and rode sweet singletrack, before eventually having to get back to work in Moab.

What motivated you to ride as much as you have over the years?
Competition, friends, and wanting to explore have been my main motivations throughout the past 2 years.
I have been commuting 100% by bike since February 2013. I have ridden RAGBRAI twice, raced in the Illinois and Iowa MTB series, raced two I AM FAT fat bike enduros, raced two Copper Harbor trails fests, and Single Speed USA.


What inspired you to commute by bike regularly and why do you enjoy it?
I think I decided to start riding to work because it was a chance to get more riding in and save some money; I kept doing it because I was actually enjoying going to work. I love to take different routes, explore on the way to and from work. At times during the winter in Davenport I would ride in fresh snow on top of an iced over creek on my route to and from work.

For those who have never been to RAGBRAI- tell us about it and what it's like!
RAGBRAI is the Registers Annual Great Bicycle Ride Across Iowa and is the oldest and largest bike-touring event in the world. It usually starts on the Missouri River on the west side and ends at the Mississippi River on the east side. You ride an average of sixty miles a day for seven days, passing through tons of small amazing towns on the way. The people you meet are the best part of the event. You do not have to do the whole thing, even if you can make one day you'll have a blast. 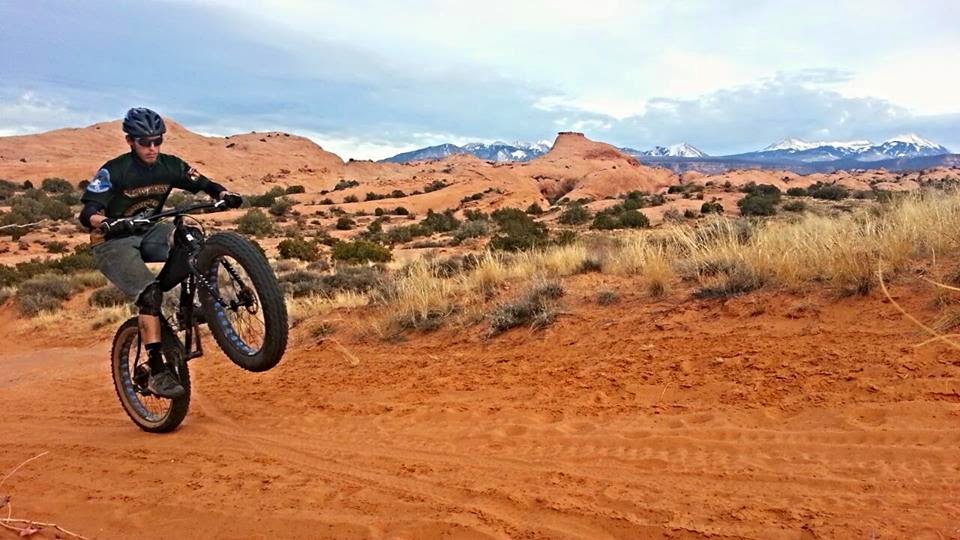 What would be your favorite competitive biking event and why do you enjoy competing?
I partook in Single Speed USA this year and had such a blast. It happened to be in Copper Harbor where I was working this summer. People start rolling into town on Thursday, I lead a group ride with some racers who hadn’t been to the Harbor, ended up they were from Iowa as well, we had a great ride then hit up the Mariner North for pizza and beer. Friday everyone rides and parties. Saturday is race day 31 miles and 3500ft of climb with 350 other crazy singlespeeders. I took 2nd place for fatbike and 18th overall. It was a crazy fun weekend and plan to make it to SSUSA 2015 at Levis Trow Mounds, WI.

Do you remember how you felt on your first mountain bike ride?
My first ride on singletrack was by myself. I remember riding for 5-10 minutes, stopping, calling my buddy and saying “This is intense as heck!” That's all it took.

If you had nervousness at all, what did you do or think to overcome it?
I found you ride so much better if you think you can do something versus thinking you’re not going to make it.

Do you use clipless pedals? If yes, what are some tips/suggestions for beginners that you would share? If no, are you thinking of trying it out at all?
Currently in Moab I do not. I did use them for about 2 months in Copper Harbor. I like flats and clipless both for different reasons. Beginners, you’re going to fall. Set the screws that hold the clip very loose, which can help with clipping out.

Have you had any biffs that were challenging for you on a physical/mental/emotional level? What did you do to heal and overcome?
In February 2013 I had to get 8 stitches in my knee from a crash riding in the snow on singletrack. I had cabin fever and eventually healed up enough to ride after about 2 weeks. A few nights later I crashed messing around cutting through a disc golf course on a ride home and cracked a rib. I was out for the remainder of February. I just rested and waited it out, planned rides and watched tons of videos. 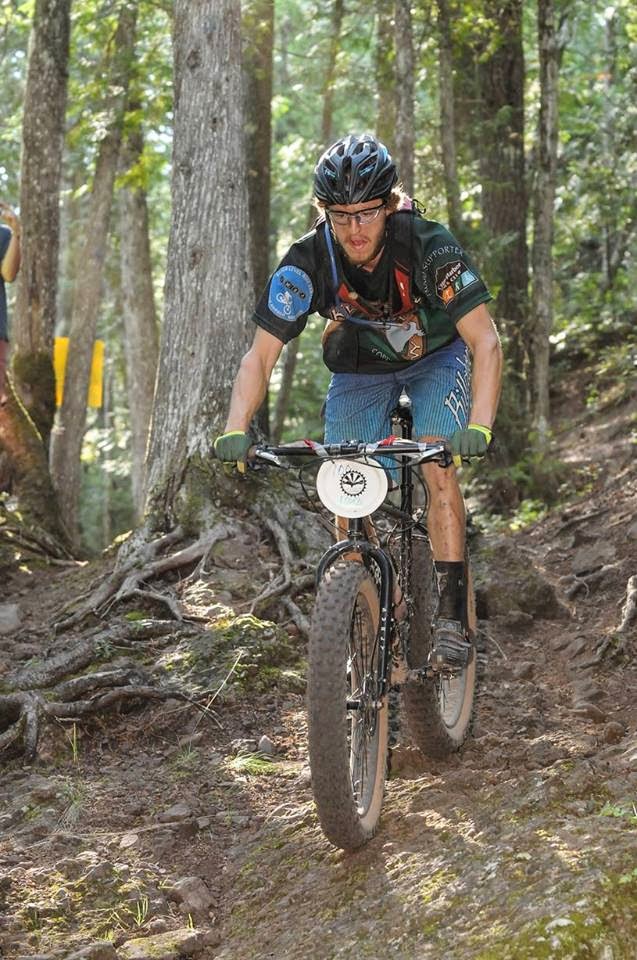 When you started out riding, what were some handling skills that challenged you? Do you have any suggestions for what helped you grasp them?
Cornering and braking are big things that I feel helped me improve once I got the hang of them. First off, one finger braking with hydraulic brakes helps a ton. Only having one finger on the brake lever gives you better grip on your bars and quicker easier braking. You can set this up by sliding your brake levers out until they line up with where you index finger reaches the lever comfortably with a good grip on the bars.
Braking into corners is huge, using your front brake more in the beginning of the slowing process slows you down significantly faster that your rear brake, then apply the rear brake closer to the corner until you hit your cornering speed, then you can accelerate under control out of the corner. Keep your eyes looking where you want to go.

Are there still handling or technical riding aspects that you find tricky? How do you not let that drag you down when riding?
I am always trying to improve my braking into corners and cornering. It can be a lot of trial and error and can change with conditions. Mostly I just try to remember to have fun and try to ride smoothly.

What do you love about riding your bike?
The freedom, it has taken me places I never would have even thought about. The feeling of accomplishment after a ride or feature. Being able to progress is super fun.
I love sharing my rides, taking pictures and making videos. I think the more people that I can share my rides with the more people that will realize there is a ton of adventure in your own backyard, you just gotta get out and look for it.
Most every night in Moab I sit down and look at my big map and decide where to go explore or shred the next day.

Tell us about your bike(s), what they are like and why did you choose them?
I currently ride a Surly Pugsley with a manual 2x10 xt drivetrain w/ narrow wide big ring, Shimano Deore brakes, Gravity Dropper post, Brooks b-17 narrow saddle, and a Surly BUD 4.8 front tire and a Surly Nate 4.0 rear tire set up tubeless. 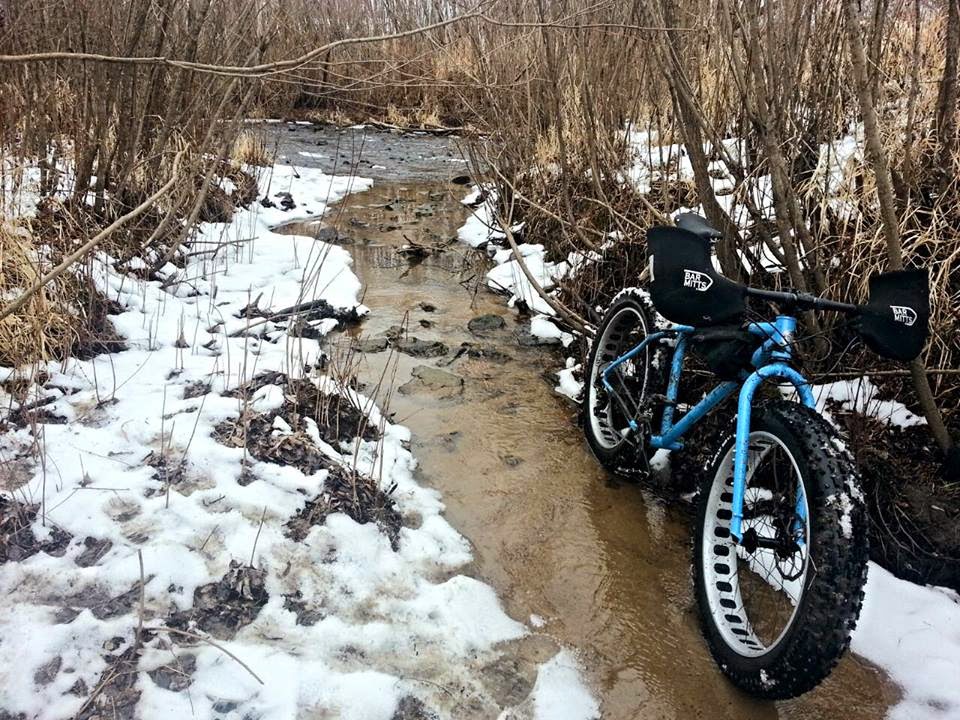 I love fat bikes, they’re not just for snow, they are so versatile, you can ride them in so many places and enjoy it, and the traction you get is confidence inspiring. Not to mention it’s a great conversation starter. I am a big fan of Shimano parts, I run tubeless to prevent pinch flats and being in the desert there are lots of thorns that like to stick in your tire. I think dropper posts are one of the best upgrades you can add to a trail bike, it allows you to get your weight back when you need to and allows you to get your seat back up to proper pedaling height quickly.

What clothing/bike accessories do you love? What would you recommend to your friends?
I have had great luck with my Louis Garneau X-Lite Cycling jacket (wind breaker), it is hi-vis orange, can pack into the size of a fist, very breathable yet keeps wind out. I have worn this and just a t-shirt at 30 degrees multiple times and kept nice and warm. I have used it a ton and it has held up so well. Don’t really go on a ride without it. 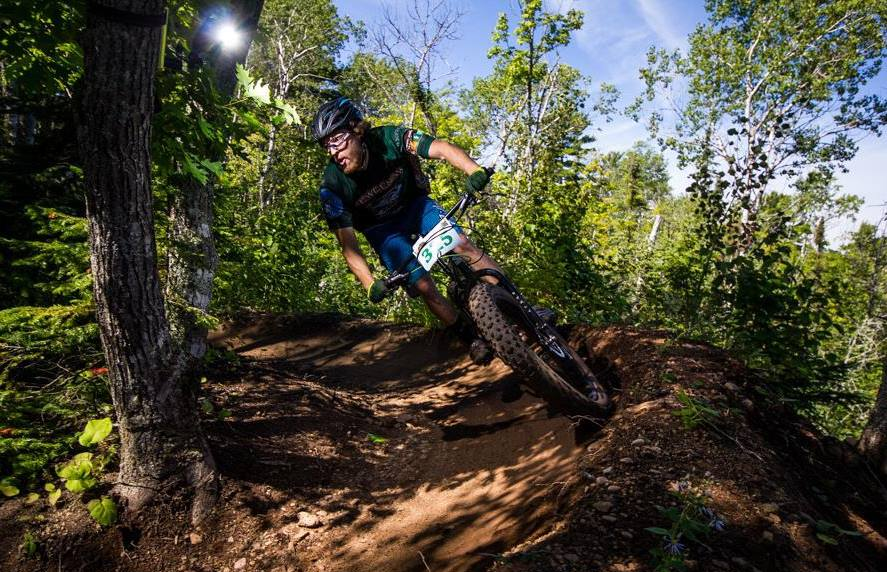 What do you feel deters people from getting involved with mountain biking?
It looks scary or intense, and it can be at first and in general.

What do you feel could happen to make changes and/or encourage more people to ride?
It is all up to you how rad you want to try to get. Go with friends that will slow down for you, find riding partners of similar skill to ride with. Practice!

What advice would you give to someone who hasn't mountain biked before-but wants to?
It’s the best thing I ever decided to start, listen to what people have to say but not everything.

Tell us a random fact about yourself!
I am a horrible climber and climbing scares me, but I want to get better at it.