Adventures of the First Lady- Finding a Niche Pt. 2

During the latter two weeks of January (Around the 23rd-28th) I was tasked with "rippin' n' tearin'" apart some Specialized Expedition bicycles. A few of the bikes were still in good condition, but needed new cables/housing, pedals, seats, newer brake levers, etc. This was going to be something that at first caused me a lot of anxiety- because I was to cut cables and I didn't want to do it "wrong." Eventually I understood that as long as I didn't shorten the housing, I'd be alright.

Yup. I have this habit called: over-thinking.

Then, routing the housing through the bike (internally routed)- figuring out which side/hole these cables were supposed to go through. Understanding how to curve the housing, but not kink it.

After the first bike was accomplished, I felt pretty well burnt out. There was so much on my end to understand, my brain was simply not wanting to cooperate with it all.

The next day I came to the next bike with a sense of direct purposefulness.
No over-thinking.
Take my time, understand what I'm doing. Observe cable housing ends, cut. Looked at the other bike for routing purposes. Insert cables. I also learned that I enjoy taking cable out of grip shifts as well as replacing it. It's the little things. Feeling accomplished. 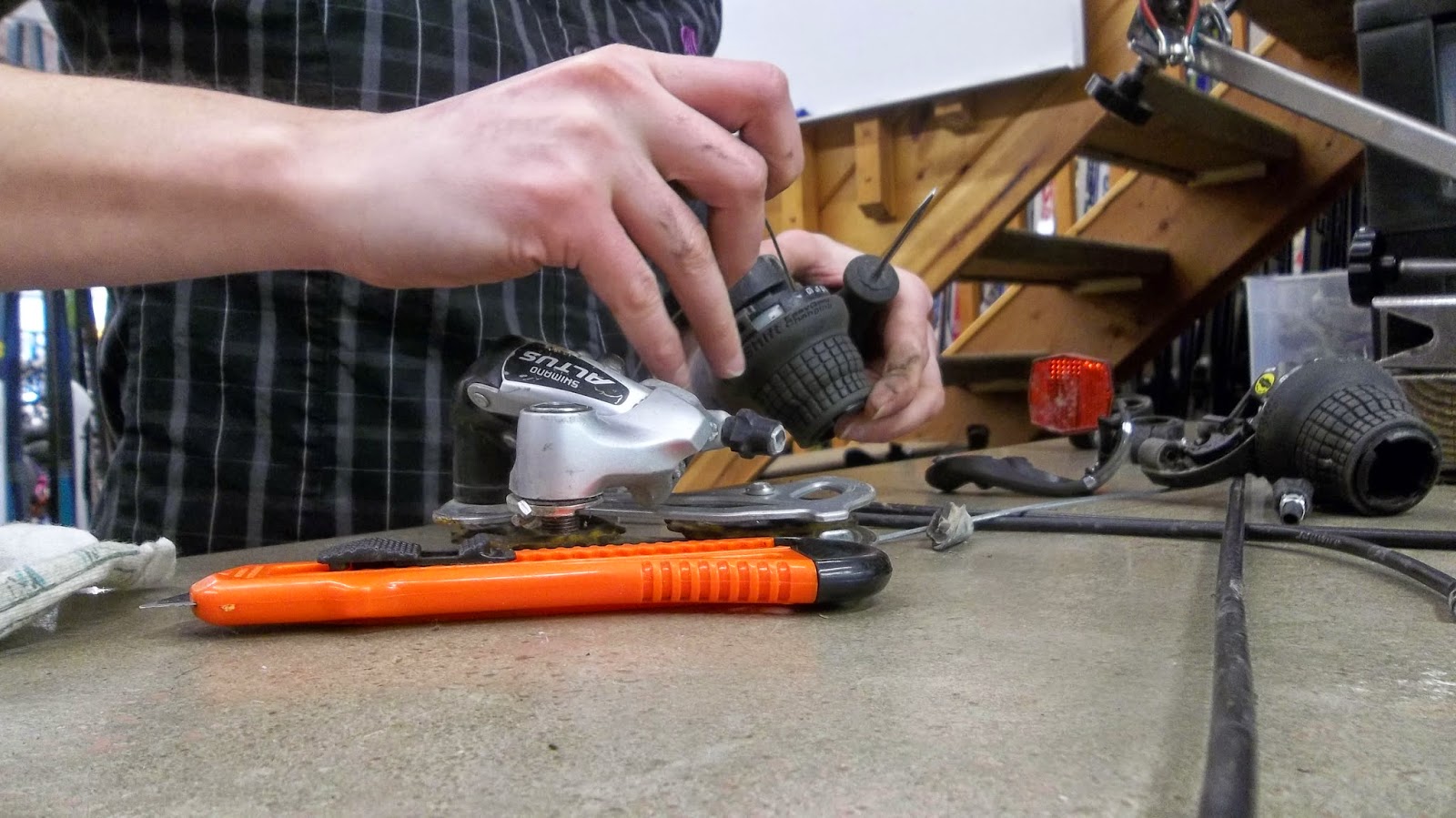 Then we had a bike that turned out to have a crack in the carbon frame. With a new bike on the way- we had to take off the parts that would be considered upgrades from the parts included on the new frame. Some reason I had nerves dealing with this project. A few of the things I had done many months ago on one of the project bikes at home (I think my Cali)...I didn't want to mess up. Of course I panic internally. With Travis on the phone for part of the time, I couldn't relay my feelings/needs appropriately. So I turned to the next viable thing- the internet. Found a video for one of the things I needed to take off, but by the time I finished, Travis was off the phone and could help. I did have the right idea for the tool that needed to be used. At least I had that going for me.

Then back to some familiarity with starting bike builds out of the box. I find that, overall, I'm not intimidated by those anymore. I need to get tutored in wheel bearing adjustments. I feel like that's the next step.

Another exciting step for us during the week was setting up advertising in Inspire(d) Magazine! Yay! One of several changes we'll be making for the coming year. We're super excited for this opportunity.

Another topic of conversation was about the women's rides I planned to have. Thus far we are waiting to hear if we'll have someone coming on staff which would dictate how many persons we hire. Just a wee bit stressed out...only a wee bit. Anyways, needing to decide how exactly the rides will go. So far we for sure feel that I might be best offering a 2-person ride every Sunday around 4 p.m. This way those who are new to mountain biking can go out on a guided ride without worry of holding a group back. It also allows for more time to session areas. People would sign up ahead of time. There would be options of larger groups for Cranksgiving and our NYE Women's Fatbike ride. 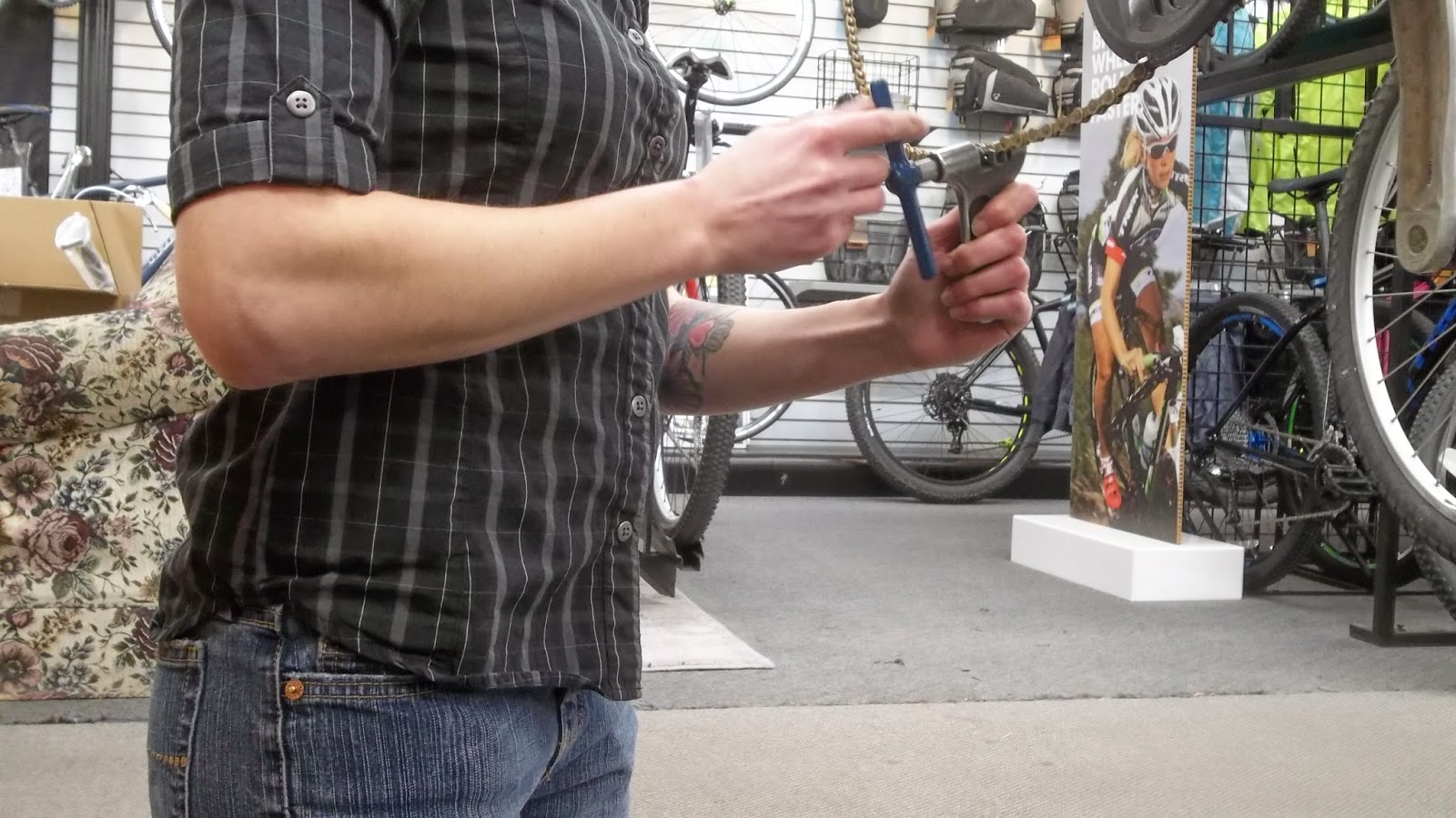 Each day has presented new opportunities for growth. Sometimes finding myself mentally taxed due to the reality and acceptance of everything I have yet to learn. Growing my confidence bit by bit.

You know what? It's all good.