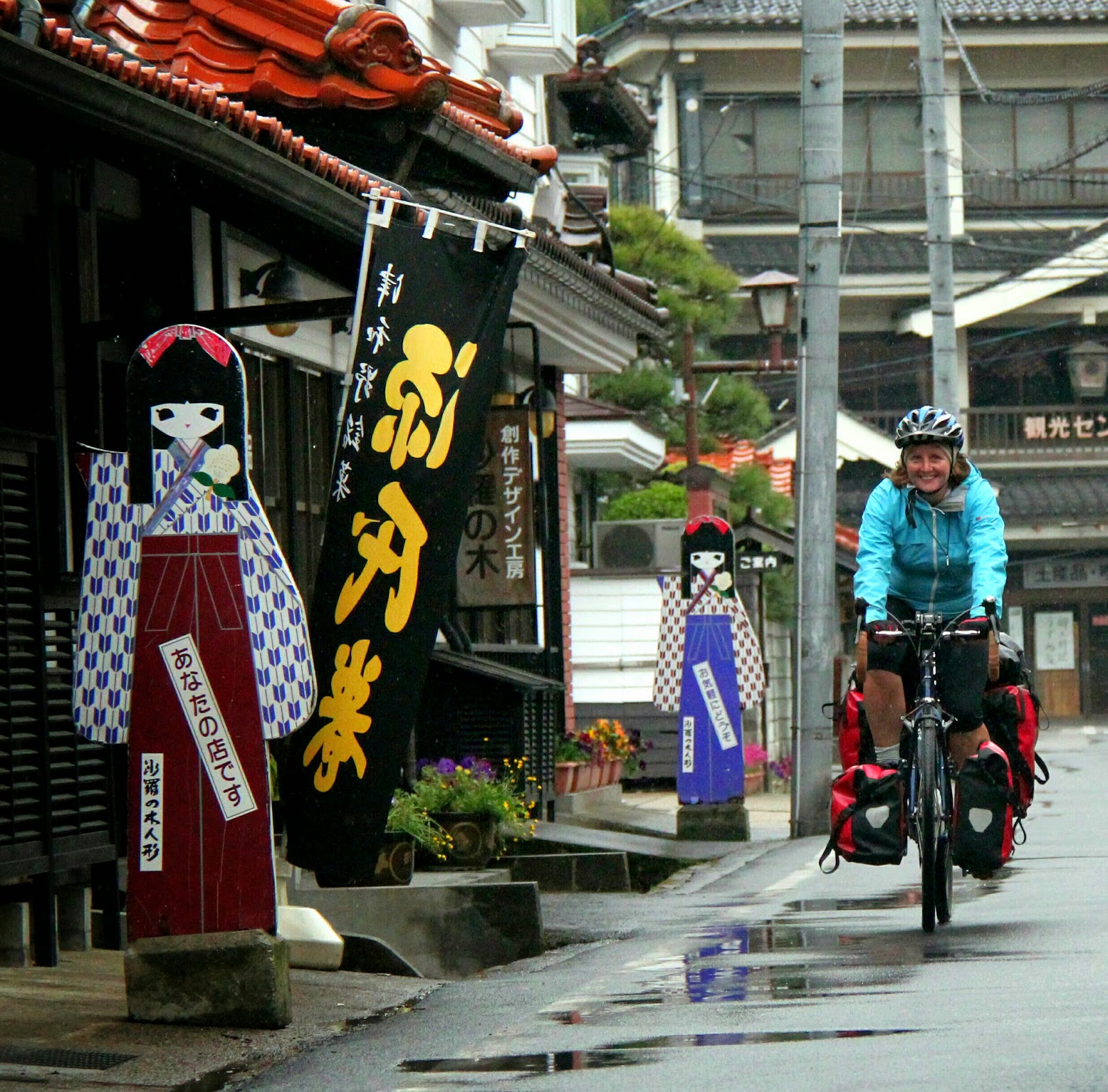 Meet Laura who is currently on a cycling trip around the world (with her husband). She used to be lawyer in London, but decided life was too short so quit.
You can check out more of their adventures here: www.thenextchallenge.org

When I was a child. I never went very far (no more than 3 miles from home) but I loved the freedom and independence it gave me to go wherever I wanted to, before I could drive a car.

What motivated you to ride as much as you have over the years?
I go a little crazy if I don't get enough exercise...so maybe fear of insanity?

Have you competed in events? If so, what were your reasons for competing. What would be your favorite?
I have entered competitions in the past, but I've realized that I'm a social rider more than anything.

Favorite is time trial - short and sharp road race. I'm on the heavier side of life, so fewer hills if I'm racing to win.

What kind of riding is your favorite? (paved, gravel, mountain, etc.)
Depends on my mood. I love the adrenalin rush of mountain biking and the ability to get off the beaten track - I want to do more when I get back from my current cycling trip. Fast road (paved) cycling can give a similar rush.

Do you remember how you felt on your first mountain bike ride?
It was like being on a rollercoaster. It was awesome.

If you had nervousness at all, what do you do or think to overcome it?
Took a friend who was more nervous than me so I didn't think about my own panic so much.


What are the mountain bike trails like that you've ridden on?
Mainly graded 'official' ones in forests around the UK.


What inspired you to give mountain biking a shot?
It was accidental - I was riding in a park near home and saw an interesting looking trail, so took it.

What suggestions would you give to someone who is new to mountain biking and has never done it before?
Work on strengthening your thighs so you are comfortable standing up on the pedals for long periods.

Do you use clipless pedals? If yes, what are some tips/suggestions for beginners that you would share? If no, are you thinking of trying it out at all?
Sometimes. They're great on a road bike. Practice away from traffic first of all and make sure you align the cleat properly to avoid knee issues.

If you are a commuter what are some of the challenges you face and how do you overcome them?
Arriving at work sweaty! Even if your workplace doesn't have a shower, a change of clothes can do wonders. Or join a gym near work so you can use their facilities.

Do you commute even if the weather isn’t ideal? Why or why not? If yes, what do you do to make it more tolerable?
Yes - I commute in all weathers. I commuted in London and a bike was the quickest way for me to get to work (plus I hate the subway) so I was reluctant to do anything else.

What do you love about riding your bike?
The freedom and the time to think.

Tell us about your bike(s), what they are like and why did you choose them?
The bike I am currently riding (around the world) was very kindly given to me by the manufacturer, Ridgeback (a British bike company). It's a heavy duty, steel framed touring bike. It's styled like a road bike with drop handle bars but is much sturdier with a longer wheel base and thicker tyres.
I used to commute on a stylish, baby blue single speed which I loved (made by another British brand, Charge).

What are some tips/suggestions you would give to someone new to commuting?
Obey traffic laws: in particular, stop at lights. Fight the urge to stick close to the curb - you're more visible and it's much safer to cycle in the middle of the lane, even if car drivers get annoyed at you.


What clothing/bike accessories do you love? What would you recommend to your friends?
Brooks saddle. I never wear padded shorts anymore because the Brooks saddle is so good. It takes a little while to wear in (read: a few days with a sore ass) but then you're all set.

You are on a bicycle tour that sounds fantastic! What inspired your decision to do this?
I've also wanted to do a longer bike trip and reading about other people's experiences showed me that it was totally possible. The Irish author, Dervla Murphy, was a real inspiration: she cycled alone from Ireland to India in the 1970s and wrote a book about it.

How did you prepare yourself for the tour?
The main thing was working out what to take, as we are on the road for over a year. I didn't really train for it, as I cycled heaps anyway and figured I would get fitter as I went along (happily, this worked out fine). 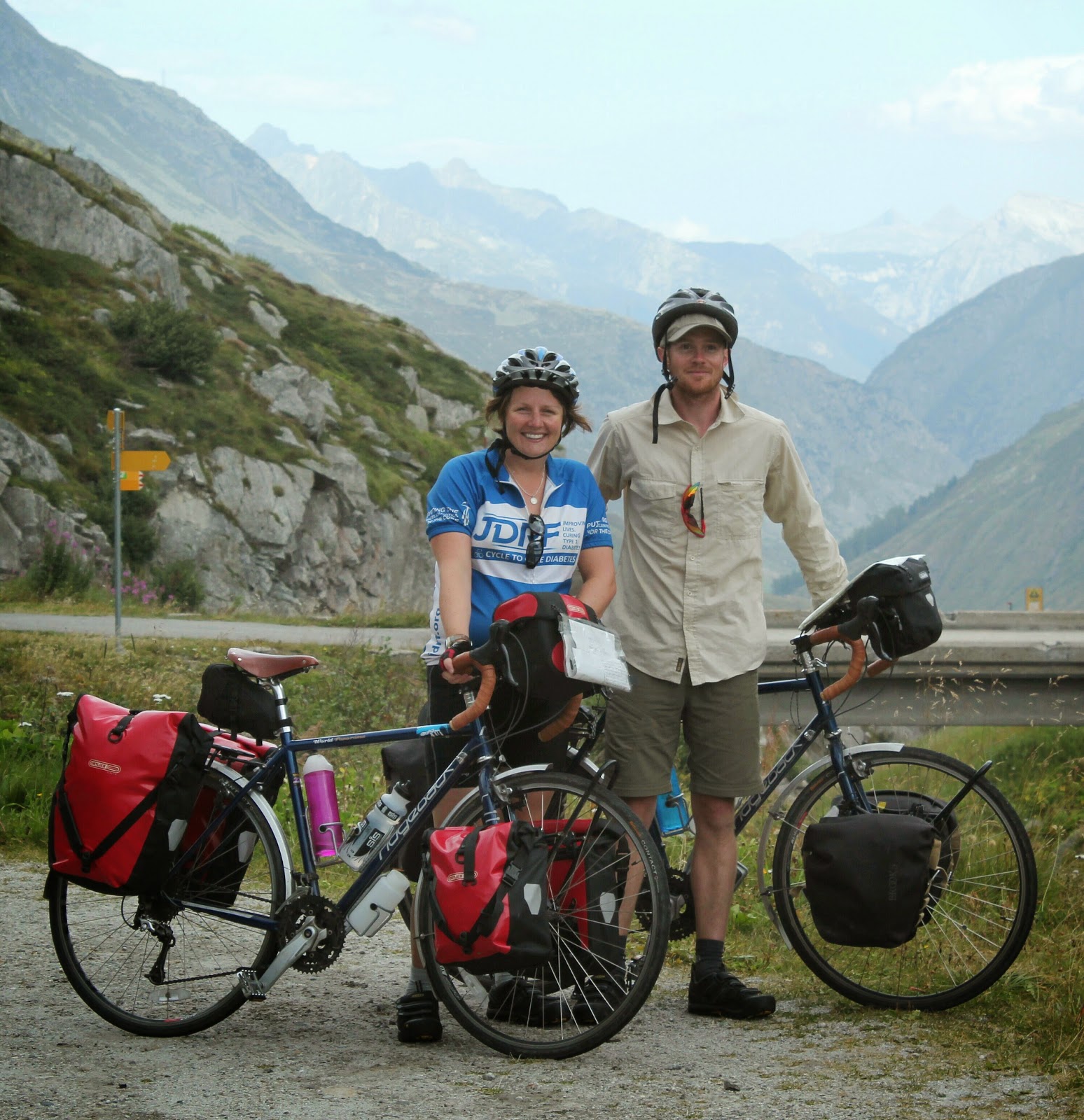 What are some of the mishaps you've encountered while on tour? How have you dealt with them?
We've had a couple of cracked wheels but were able to ride on them until we reached a bike shop. Any other mechanical failures (broken chains etc) I've managed to fix myself.

The worst thing that has happened so far was probably getting sick in India. The same sickness kept recurring (probably some kind of food poisoning) and it totally stopped us from cycling. We checked into a hotel for a few days each time and when it didn't get better, eventually booked a flight out of there.

What are some positive experiences that you didn't expect to have?
I didn't expect to be invited into people's homes so much. In the Middle East (Turkey, Iran, UAE and Oman), we were invited in by strangers almost every night. Muslim culture is extraordinarily hospitable and guests are treated very well. It provided a real insight into other people's lives - as well as meaning we didn't have to camp outside in freezing temperatures!

I'd imagine on a bicycle tour you'd learn a lot about yourself and your abilities-what have you learned so far?
I have learned when to stop. Back at home, I'm the kind of person who is always busy and hate sitting around doing nothing. However, cycling 40-50 miles every day gets pretty tiring after a while, and I have learnt the importance of taking a day off to relax and let my muscles recover.

Do you feel you will do another tour in the future?
Definitely. I may not so such a long tour, but I'm already planning trips around the UK once I get home.

What suggestions would you give for someone who wants to start touring? Where should they start? What equipment should they look for?
There are loads of useful websites to look at for advice. Try the Travelling Two and Tom's Bike Trip.
Don't worry too much about having the right gear. Try a single night on whatever bike you can find, with a backpack. If you enjoy it (and you should!), then try a longer trip and think more about the right gear.
In the longer term, panniers are much more comfortable than backpacks, which can cause back issues on multi-day rides.

You are touring with your husband-who came up with the idea of doing it together?
On the very first day we got together, we both said how much we wanted to do a trip like this and things grew from there.

I feel that couples who ride together are great-but they pose their own sets of challenges at times. Have you had moments where you've butted heads over something? How did you overcome?
We argue occasionally, but usually about politics or big issues. Letting go of the small things avoids a ton of conflict (although admittedly, my husband usually lets me have my way). Spending so much time together, we are hyper-aware of what pushes each other's buttons and know when to back off and give the other some space.

Do you feel you will do a tour on your own, or do you prefer to have company?
My first ever bike tour was alone. I rode an old, heavy bike I'd had since I was a teenager and slept in a leaky tent. It should have been awful, but after a couple of days, I was hooked.
I would definitely do a short tour on my own again but anything longer than a few days would get lonely - I like talking too much.


How have you enjoyed doing something like this with your husband?
We're creating memories, so that when we're old we'll still have something to talk about.
Labels: interview