With my women on bike series blog project, I made the decision to reach out to females who weren’t necessarily Decorah residents. I feel that there are many women out there who have something special to offer in terms of experiences and advice. At one point last year I was given a link to My Alibi Clothing, a company that was started by a female bike rider. I figured “why not?” and contacted Abbie to talk to her about her bike riding history/experiences. 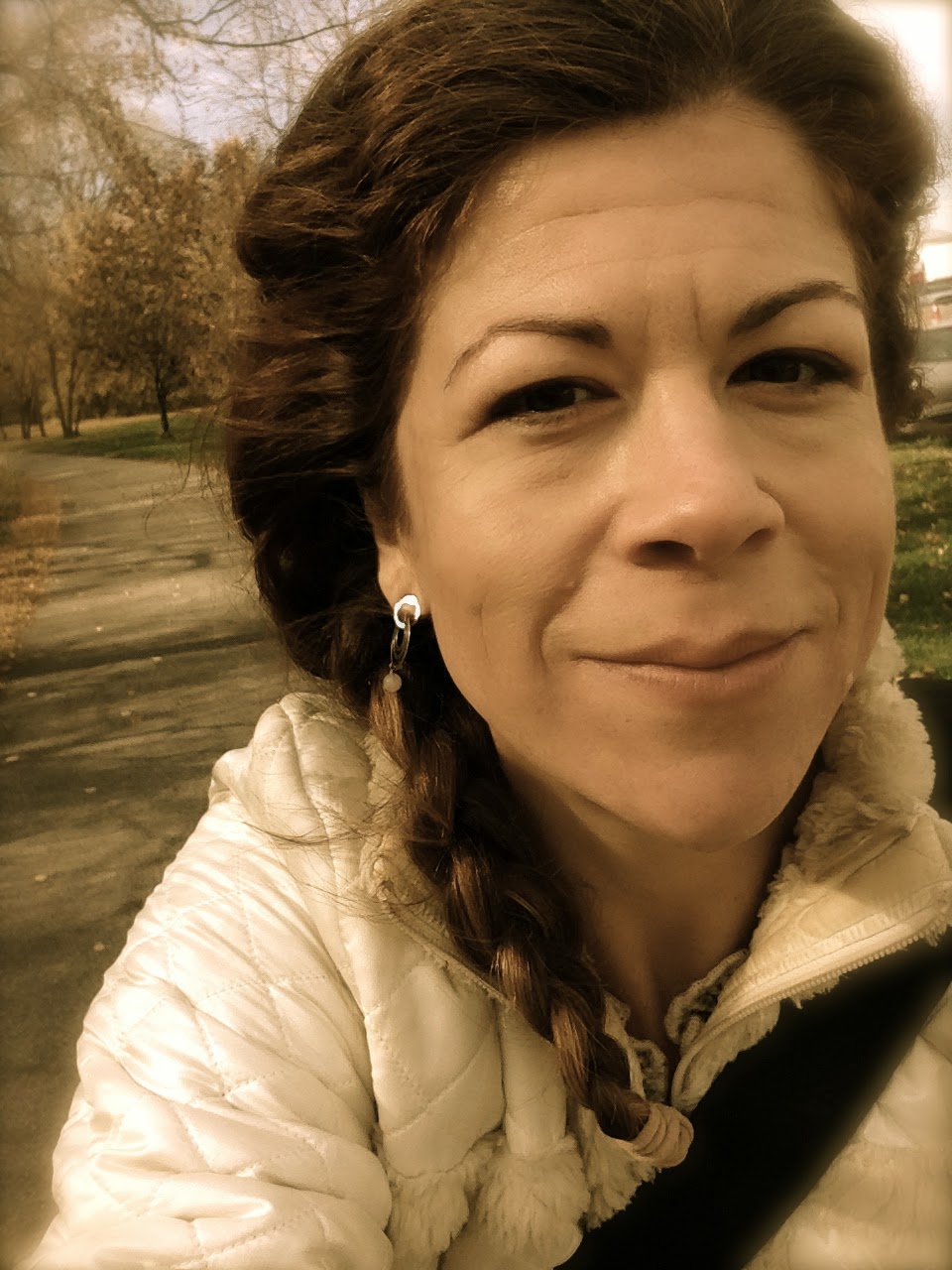 “As a kid I was always that kid on a bike! It was after high school that I found biking to be a passion of mine. My bike was my independence.”

The summer her first year after college is when she bought her first mountain bike. It was Abbie’s sole form of transportation and her freedom. During this time she was dating a mountain biker. Of course when you date a mountain biker, you likely will find yourself going out on the mountain bike trails with them. Often they would do mountain bike rides at night! (Amazing!) This gave her a new and higher level of mountain biking skills as she learned to trust following the guy in front of her (so she wouldn't be left in the dark).

Biking for Abbie has been a journey and a release of stress. She described finding the “addictive quality” of it, which I personally can relate to.

Eventually Abbie moved to California and that is where she found the competitive quality of biking. She was inspired to go fast, and her friends eventually said “you’re doing it!” and that is when she started racing. Abbie went professional in 2004 and instead of riding a few hours a week, soon she was riding 20 hours a week.
Abbie said “I realized I had potential with my body.”
That statement just makes me feel empowered! Abbie talked of her parents/grandparents, how one side was German and large-boned while the other side of her family were built of small women who seemed to “shrink away.” She wondered “What will I be? What is my physical destiny?” She deduced that it would be “what I decided.”

I feel so many women can relate to that in some shape or form. I’m of small stature but realize as I keep active/bike/tone that my body can be a small powerhouse. It goes to show that even if your body does not replicate what media says it should be-you can make your body into a beautiful, strong version of itself.

She said a significant moment for her was in 2004, during her first year of racing professionally. She had one particular day where it was hard to stay motivated. The ride had left her feeling muddy and gross; then a woman came up to her. “I’ve been your fan for so long!” she said. Abbie was flabbergasted, because she hadn’t been riding professionally long at all. Then the woman told her “If I looked that good in spandex, I’d ride!”
That is when it dawned on Abbie how important clothing is for women. Women have such a deep-seeded pressure to look like a rider and that was a huge limiter for many. That moment is what inspired My Alibi Clothing. She wanted to make 20 or more products right away, but instead she started with one product to make your other clothes more bike friendly.

Abbie designed the bloomers to let women jump on the bike with whatever clothing felt good to them. Abbie said “try to ride a bike with your own style clothes, it will feel more authentic to you.” For some, they may find commuting to work isn’t ideal, but they will feel more comfortable using the bike for their weekly errands. Abbie said “Do what feels natural for you!”

Ultimately, the bike unfolded a passion that evolved out of pedaling. Even I find that I come up with some of my greatest ideas while I pedal away either on a trail or a stationary trainer.

Abbie leans towards mountain biking for the technical challenge as road riding is not as inspiring for her. She said that mountain biking connects her (and others) with nature and that is why she wants to protect it-not deplete it. She wants to stay true to social and environmental responsibilities, which is why the cost of her product is higher. She strongly believes in educating the public on why this is important and a value behind her product. Not only is it supporting environmentally friendly practices, but supports the local community where they are made too. 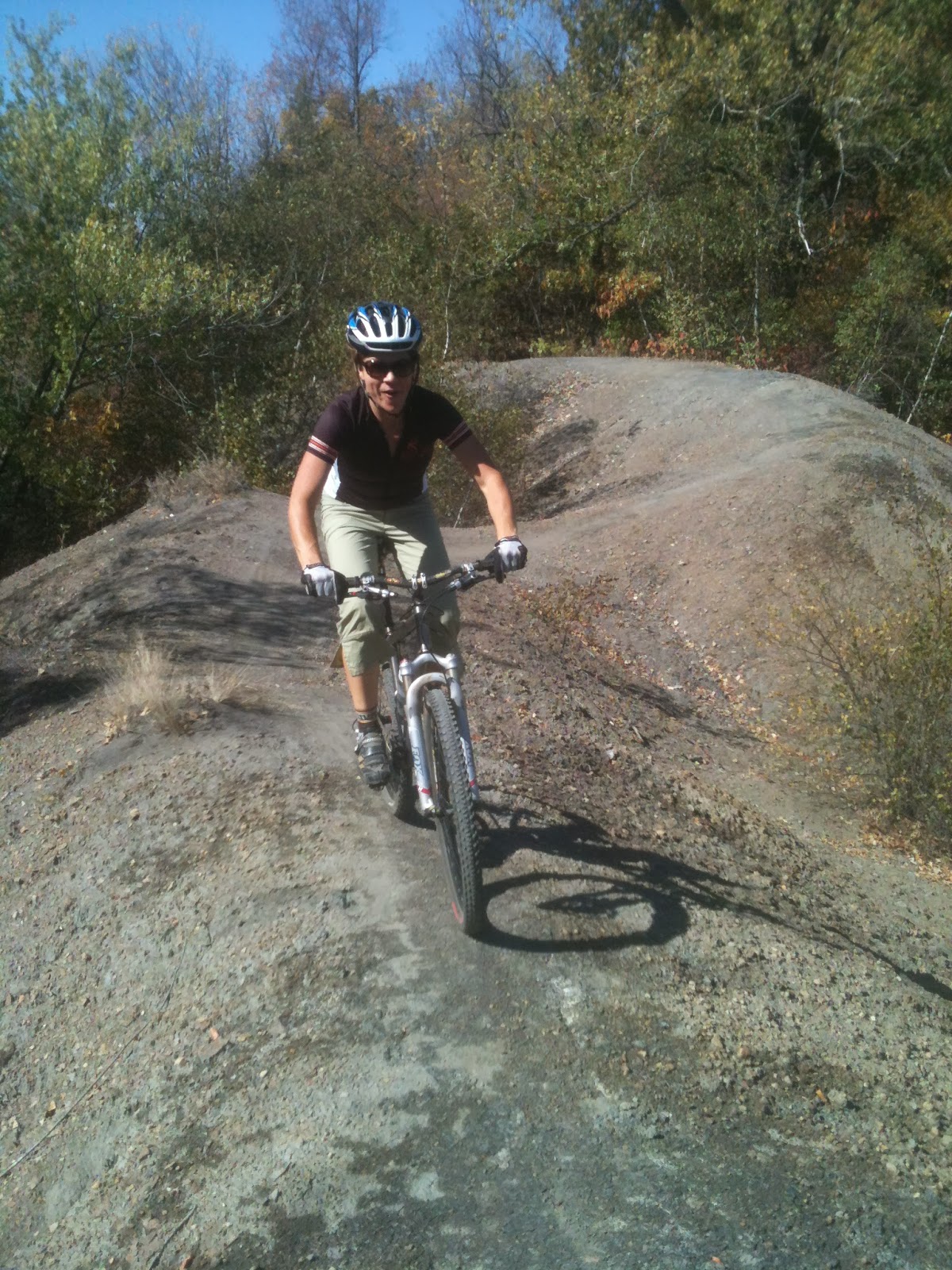 I asked Abbie if there was ever a race or event that really stuck with her; The Downieville Classic in California was it. You start at the very bottom of a mountain and go 3000 feet up an intensely long climb. It was a surreal experience that lead into a downhill that took about an hour to complete; you were able to just let go and fly. Abbie said that the ride gave her a new relationship with climbing, because that climb you had to settle into a rhythm vs. bursting it out at 100%.
She said the other special thing about that event was just getting to the finish line, the competition against one another wasn’t as important -it was all about finishing and being proud of it. “We went against the mountain!” Not to mention there was a fun party afterward for all of the riders who participated, of course that’s fun!


Abbie said that is the one main difference of living in Iowa, “Where are the climbs?!”

Being that I am new to clipless and training on them right now, I asked Abbie about her clipless experience and what advice she had to offer.
She recalled that going clipless was her first big bike expense, keep in mind she was in college at the time, so $80.00 was a pretty big investment. She said that her guy friends said “It’s time!” and she had no choice in the matter.
“First fears, everyone has them; you may fall 1 or two times, but you’ll get it!”
Abbie then told me of a time she fell over at a stoplight in traffic, of course she was embarrassed, but she brushed it off. After awhile, clipless became second nature: “practice clipping in/out and feel it.”
The improvement of your ride is huge, all of your muscles link together and the pressure/stress it takes off your feet and ankles is incredible.
Abbie started off on spd's, but she recommends the “egg beater” types by Crank Brothers, feeling they are a bit easier for new to clipless riders.

Abbie says her lifestyle is bike integrated and she lives within close range of her community (to make that easier.) She is pretty tolerant and ambitious to weather; however this year she’s driven her car a few times instead of riding her bike.
She teaches yoga and rides to yoga almost every time she has class, and she stresses to her students that riding in the weather isn’t nearly as hard as it looks.

“It’s fun! Singletrack in snow is a blast! Point, trust, and don’t stop pedalling.”
Of course I can’t talk to someone who has biked as much as Abbie has without asking about bike biffs. Particularly since I have had a couple biffs myself and I’m genuinely curious to how people get over the mental/emotional aspects.

Abbie said “as an adult going into mountain biking, you have to accept that you will crash. Especially if you let the fear in, you will crash.”
She had been riding for 3 years and broke her arm at Sugar Bottom. The crash was all based on the terrain; there was a root that had tripped her up. That became her mind block and over the next few months, once she was back on the bike, she had an apprehension of roots. To overcome this, she stepped back to the beginner mountain biker mindset. She went through re-training her mind and telling herself “I have to try again.”
If you can, the other helpful suggestion she has is to get back on the bike quickly.
When she had crashes during a race, she had to get back on; she couldn’t let fear take over.
“Shake yourself off and keep trying.”
While we were having our conversation, she admitted to having had a bike crash last week! Simple catching the curb wrong; freak accidents happen.
Abbie said that mountain bike trails usually have multiple levels of trails, start out on the more basic ones and build your skills up. She said often women are inspired by the men (boyfriends, male friends) they ride with, but there is something special about having a female mountain bike mentor.
She’s worked at mountain bike clinics where they would divide groups into skill levels; she said that women are effective at seeing things you’re doing and explaining how to improve.

For Abbie, when she’s on the bike she has the freedom, joy, and self confidence to just be herself. When riding the high pressures of society: looks, personality, talking, etc. are all gone. Her time on the bike is the time where she can be completely and authentically true to herself. She is able to feel confident and strong in mind and body while on the bike.

It was a pleasure to talk with Abbie and hear of her experiences and what biking has done for her on so many levels! I will say that Abbie definitely inspired me as an individual and I am very thankful for the opportunity to include her on my blog project. It goes to show that regardless if you are a woman, you can accomplish many great things if you have the passion, drive, and willingness to keep going.