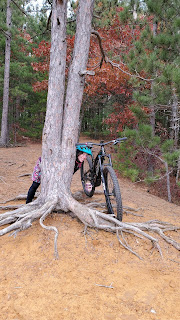 Well, folks, I hate to say it but it feels like the (dry) riding season is winding down and that makes my heart a little sad.
Thankfully, Travis and I were able to sneak in a day trip to Levis Mound with our EMTBS (!!!) to see how they would perform.
It would be my longest Emtb ride away from home, and I was curious about how the battery life would fare (would I ever need a range extender?) and in general, see how I would feel riding my bike somewhere else for a change.

Dirty Gertie and I have established a comfortable relationship on our local trails, tho I will say we still have some kinks to work out when it comes to what tires I'll eventually run and be happy with on a regular.

I have had some stunning accidents on this bike, and every time I feel it has had something to do with the tires not being grippy enough. One lives and learns and sometimes just has to accept that part of mountain biking nerdery is experimenting with tires.

Now, let's get back to what you're really wanting to know. How was riding the Levo SL at Levis Mound?

Overall, I would say Levis Mound is equal to Decorah when it comes to being a fantastic proving ground for pedal-assist mountain bikes (Emtbs). Sure, there are a lot of awesome trails that have less elevation but if you want to see some majestic views you need to climb to the top. (The overlooks and such are well worth the climb, for sure!)

We started our ride on some of the lower-lying trails with a goal of making sure to hit up a trail named Wolf Run. It has an awesome wooden berm that originally freaked me out when I first saw it, but after riding it a few times, it gives this awesome adrenaline rush!

The day we rode at Levis wasn't going to be warm by any means, the high for the day stayed roughly around 34 degrees and it was mostly overcast. Being that we would be riding Emtbs, I dressed with an additional layer as I knew I wouldn't be working quite as hard as I would be on an acoustic bike. (acoustic bike=bike without battery or motor.)

Back home I've gotten used to riding my Emtb with my custom Trail mode setting. I changed the Trail setting to be more of a "one and done" setting so I wouldn't have to go back and forth between Eco, Trail, and Turbo. Because of that tune, I hardly ride in Eco and I rarely use Turbo- except when I absolutely feel like I have to. However, being that this was my first time riding somewhere else with my Emtb, I opted to start with Eco mode. One because most of the riding we were doing at the time was relatively level, and second, I didn't want to use up my battery power quickly.

Honestly, when we started our ride I was feeling out of sorts. I was nervous for whatever reason- maybe it was the tires or just being on an Emtb for the first time on mountain bike trails in weeks. Also, Levis is roughly a once-a-year trip so I remember some stuff but not all, and I always seem to get surprised by something on our trips- but that makes it entertaining and worth coming back to.

Overall, going from riding an acoustic mountain bike to an Emtb does take some getting used to. Even tho I have ridden my Emtb a lot this season, if I have an extensive break from riding it on the trails, I found I had to get used to having assistance. For being in an area that I don't ride on a regular basis, I found that Eco mode was perfect. It gives just enough to take the edge off, but it doesn't overpower the whole experience. I only bumped it up to my Trail setting a few times during the ride, and that was when we were doing extensive climbs. Because the temps were much colder than I have been used to for some time, I appreciated having that extra boost. Cold air and my lungs do not mix, and it's often something that can trigger an asthma flareup.

If I had not had assistance, I can guarantee that with the climbs we did, my lungs would have gone past the point of just burning and I would have been having coughing fits that would last several minutes long. It would mean longer stops between riding making two cold humans even colder, which would greatly decrease the enjoyment of our ride.

So many folks seem to believe that riding an Emtb takes away all effort, and I can assure you as I look back on my GoPro footage, I had times where my breathing was up and I did break a sweat. I'm not blasting around with reckless abandon, I'm legitimately riding a bike and the assistance allows me to 1. ride longer with less strain on my knee and 2. breathe more easily when my lungs are working or the air is cold.

Truth be told, I spent many hours on my Emtb this year, and it was definitely a wonderful tool to add to my quiver. I imagine that I will find it to be ridden many times next season as well, if not for rides after a long day at work, then for picking up litter on our trails. However, as much as I love my bike, I know it's not something that will take the place of all of my other mountain bikes at this time. Not all mountain bike trails are open/accepting to Emtbs on them, even if they are strictly pedal assist, so I make sure to do research and ride my Emtb where they are allowed.

I may not look like a human that has anything going on that would be physically limiting. I would say I'm one of those folks who looks completely normal on the outside, which can be confusing to some as to why I love riding my Emtb so much. This season was one of the most enjoyable mountain biking seasons I've had, all things considered. Breathing wasn't an issue and my knee wasn't problematic- to be able to go out and put in double the usual miles was awesome!

Riding my Emtb has been a great learning experience this season and I am so happy to own one. Please know I'm not telling you that you have to go out and buy an Emtb or any other Pedal-Assist bike, but I am asking that you do not knock them until you try them. Maybe it's not something that would be particularly beneficial to you, but it could very well be beneficial for someone you know. You may have heard stories of folks on Emtbs or other Pedal Assist bikes riding disrespectfully out outside of their limits. In my opinion, if folks are riding Emtbs or Pedal-Assist bikes recklessly and/or act disrespectfully towards other trail users it's more of a personal issue than a bike issue. I think they would act that way no matter what bike they are on. 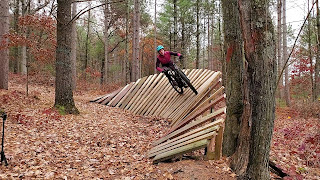 In closing, I feel that the Levo SL is an absolutely awesome tool that I can see many folks adding to their quiver of bikes. It doesn't have to be the daily driver, but it can certainly add some depth to the riding season by allowing one to explore more ground and give their bodies a break while still getting out for a ride. In terms of battery life, we had plenty of battery left that we could have easily done a second ride if our extremities hadn't gotten cold. I feel confident saying that if I'm riding somewhere more "pedally" and less climb-intensive, I would have zero range anxiety. We rode over 17 miles and had over half of our battery power left (roughly 63-65%) All in all, a fabulous day of riding in which the only reason we quit was because of the cold and not exhaustion.