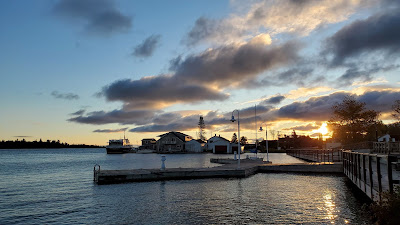 Waking up on Thursday morning was hard to do, because I knew it meant we would be leaving Copper Harbor and that made me sad. I hadn't expected Copper Harbor to warm my soul as much as it did, but it definitely brought some much-needed happyness* into my life.

I had hoped we would be able to see some beautiful fall colors, and boy did the upper peninsula provide! 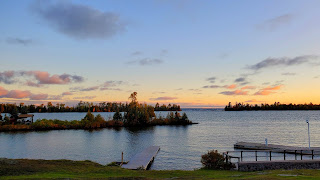 For breakfast on this day, we would walk over to Jamsen's Fish Market to procure some baked goods. I would finally get my ever-elusive doughnut and then some. There were several baked good options to choose from because we got there early in the morning. I opted for a chocolate cake doughnut with thimbleberry frosting, a Cheddar/Bacon/Chive scone, and a salted caramel cookie. Travis got a glazed doughnut, a turnover, a smores cookie, and a blueberry scone. Oh, yeah, I got some coffee too! 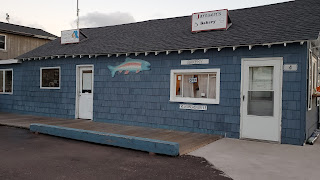 We walked briskly back to our room as it was a bit chilly that morning. I moved a chair over to the sliding doors that would take you out to the little porch area and sat, eating my doughnut and watching the sun continue to rise. As soon as I warmed up enough, I went out with my coffee to take some final photos of the lake.

We packed up the truck and headed to visit the Porcupine Mountains, a state park that has a place called the Lake of the Clouds. You pay a small fee for a day pass, which would allow you to hike on the extensive hiking trails (which we didn't do due to time constraints), see the overlook, and more.

When we got to the parking lot specific to the Lake of the Clouds, we opted to have a snack. I chose my cheddar/bacon/chive scone. Now, it should be known that I have this wild desire to absolutely love scones- but I've never had one that made me go "Damn, this is a good scone" that is, until the moment I took a small bite. 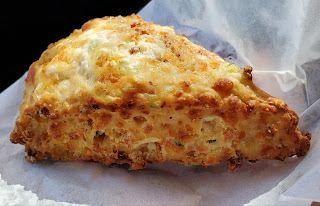 I swear light shone down from the heavens upon my head as I could say nothing but "Oh my gawd...OH MY GAWD...Wow...(chew chew chew)....OMG....What the heck?!...Oooooh....WOW." This was pretty much me the entire time I ate that scone. I fell in love with scones. I fell in love with THAT scone. I damned myself for not buying 20 of them. For not eating one every single day that I was in Copper Harbor. This, my friends, is a scone made of dreams. Crunchy scone exterior with a soft inside, crunchy baked cheese, savory inside, chunks of bacon...just everything. I swear. Unicorns fart out these scones. It's that good. So, if you go to Copper Harbor you MUST get the cheddar/bacon/chive scone from Jamsen's Fish Market. You will absolutely, without a doubt, not regret it. 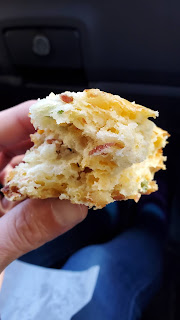 (Now, back to the Lake of the Clouds...)
Beeeyyoootifulllll!!! 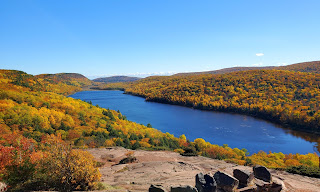 We walked up the rocks to the first lookout. Nothing gives you a greater pause than to soak in the scenery of a place so beautiful. I can't say enough how majestic everything looked. Even tho we didn't spend half the day hiking the trails, just being able to see the Lake of the Clouds was totally worth it. 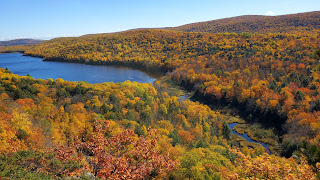 On the way back down to the main road, we stopped at a spot so I could get out and try my hand at rock hunting for a bit. We found some neat driftwood, sea glass, and some Michigan rocks. I also found another small agate that was a neat cream/peach coloration. 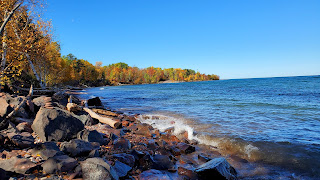 After I bid farewell to the lake one last time, we made our way to Hayward, Wisconsin. Hayward is an area we've enjoyed over the past several years when we would attend the Chequamegon MTB Festival. This would be our first time experiencing Hayward without thousands of mountain bikers visiting all at once. It's silly, but I didn't realize what a difference that would make. Anyway...onward.

We pulled into a motel we've stayed at once a year for the past several years while we attended the Chequamegon MTB Festival. This place is definitely considered "budget" but the location is so damn good and we would be able to house our bikes in our room if necessary.

I'm not going to name the location, but if one is curious please feel free to ask. Those who attended the CMTB will likely know where we stayed, and I give this warning: DO NOT STAY THERE AGAIN.

*Big sigh*
We went inside to check into our room, we were told by a fellow working outside that if his wife isn't at the counter to come out to get him and he'd assist. No one was at the counter, so I sent Travis out to get the fellow. This is now when stuff goes wrong. (Author note: I will talk about mountain biking in the next installment, let's get this adulting 101 trainwreck out of the way, first.)

I booked online, but I didn't use Travelocity or any other site, but I went to the branch site that was specific to the Hayward motel and booked online like I had in the past. The fellow said I had booked two rooms. WTF? I had a single confirmation email that showed I had booked 1 room. I showed him the screenshot I took of the confirmation email and was then told that I shouldn't book through Expedia/Travelocity/etc. I told him that I booked through the motel's website, and he assured me that I couldn't have done so. Either way, he said he'd cancel the second room even tho he shouldn't, and then asked if we wanted an outdoor room or we could upgrade to a King bed inside. Well, it's vacation, so why not go King and be inside. The times we've stayed in the outdoor room were okay, but you always walk into a room that smells like 20-year-old cigarettes. I knew the indoor rooms didn't smell that way. Plus, the time I stayed in an indoor room when I attended the Borah Epic MTB race, I had perfect wifi.

We get the room keys and unload the truck, when we're starting to unpack in the room we hear a knock on the door. The wife tells us that she wants to show us another room in case we might like it better and that she hadn't been in to inspect the room we were just given to make sure it was clean, etc. Long story short, we opt to keep our current room.

Okay. Sh*t here is just plain weird now. We were also concerned because the fellow said the place would get rowdy on the weekends, and whenever we stayed it wasn't ever an issue. However, that's because it's mountain bikers coming to race (I suppose) so anxiety started to rise as more folks started to check into the motel.

We walk over to the grocery store to pick up some snacks/beer and walk back. We find something to watch on T.V. and I try to calm my nerves. I felt horrible. This wasn't what I was expecting, not one bit. The whole situation seemed to lack professionalism and let's be real, the room wasn't great, to begin with. It was literally the only place we stayed where I took sanitizing spray to hard surfaces because we felt skeeved out.

The next morning we go over to the Hayward Family Cafe to eat breakfast and came back to our room to get changed for our day of mountain biking. It was somewhere around 10/10:30 a.m. when the person who was doing housekeeping opened the door and started to walk into our room. We literally had just finished putting on our last bits of clothing. There was zero announcement of someone entering, no knock on the door...nothing. What IF we had been doing anything else other than getting dressed?! Talk about awkward. I was freaked the f**k out. My anxiety had shot through the roof so much so, that when we were out mountain biking I had to pull off to the side of the trail to cry.

Fast forward to us back in the room after our ride. We notice it's super warm, and we start to do the logical thing like check the thermostat, turn the heat down, turn the AC on. I shower. Travis showers. It's 90 degrees in the room. We panic. I do something I've never done before- I throw in the towel and I attempt to see if we can get in at a different motel. Success!

We packed in a hurry, checked out early, and made our exit. We both felt like we were doing something entirely wrong, but at the same time, we needed to do this for our mental sanity. If stuff can change in a year, let me say, it changed for the worse.

In our new room, I instantly felt comfortable and at ease. The folks in the lobby were wearing masks, the room was clean, and it felt SAFE. A professional establishment in which housekeeping knocks on the door and announces themselves before entry. The bed was smaller, but the world felt brighter, and that's all that mattered.

(Fast forward to the present and I'm still reeling from the first motel experience. Not only was it a sh*tshow, but I have also been double charged. Charged on check-in day and charged again the next day. I called and talked to the fellow who checked us in, who was still adamant I couldn't have used a website other than Travelocity or some other site to book online, who said he'd have his manager call, to which at this time I have received zero phone calls. I have contacted the credit card company and communicated to 3 other emails tied to the motel chain, which at this time have all gone unanswered. I am assuming I will be out that money in the long haul and will take this as a valuable adulting lesson. To boot, I will not ever touch that establishment with a 10-foot pole. I don't care to leave negative reviews, but do want to share this experience so folks do not make the same mistake I did. At this time I'm keeping the recap of that experience here and in the emails I sent, but do not plan to post anything else publicly about the situation.)

So on that note, we shall end this recap of the Team GreenSmith trip and get to the good stuff! In the next installment of this vacation tale, we make our way to ride the new Dirt Candy trail and explore an entirely new trail system! 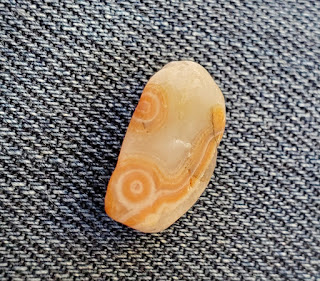 *Happyness: It's how my dad spelled it in a letter he wrote to me that I found after he passed away. So I spell it this way because it makes me happy.