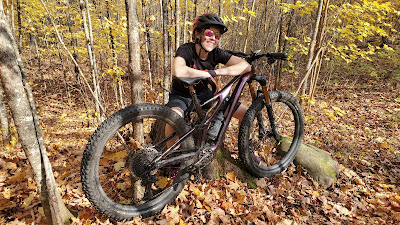 Friday would be our Hayward mountain biking adventure day and I had our route all planned out. I had decided from looking at the map, we should ride the entire Ojibwe trail, which would intersect with Dirt Candy, and then we would ride Dirt Candy back to the Ojibwe trail.
In my mind, I thought this would be the best and least confusing way. We wouldn't have to worry about parking on some random road, also wouldn't have to worry about riding too many miles (in case my knee blew up) and we would be riding two trails that would be new to us.

Let me get straight to the point. Dirt Candy was fun. The Ojibwe trail was not so fun. I guess I should say that even with what I read about the trail, my mental image of what it would be was more positive than it should've been. It is the definition of old school singletrack with some rock garden spots and roots. It was just a chug fest on our Stumpjumpers (We did the whole "Run what ya brung" and only brought one style of bike for the entire trip and the Ojibwe was slow going on our Stumpies. Yet at the same time, having that cushion wasn't so bad.)

I was excited to see the wooden feature that we would ride over/under on Dirt Candy. I love wooden features like this one or well-built wall rides/berms. This was impressive! 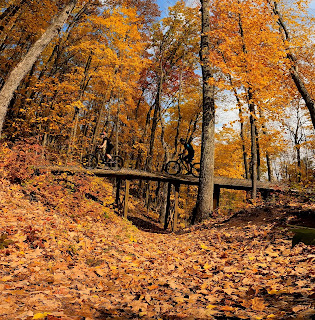 Also, the start of the day had stressed me out and I could definitely tell that my riding was being affected by it. I was holding back. I felt nervous. I was hesitant to try stuff. Certain things started to freak me out. On Dirt Candy I did go off of a drop feature of sorts and had some okay attempts at it solo. 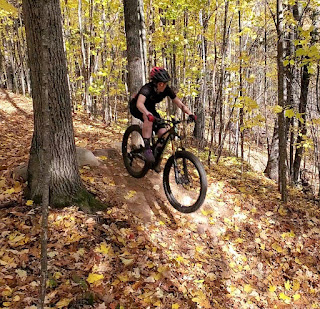 Later in the trail was a narrow wooden drop that had a landing further down/away. I did that drop twice, and both times I landed terribly, tho the first was worse than the second. I stayed on my bike, but my handling was poor. I'm not sure what it was...the feeling of being on something more narrow. The leaves at the bottom of the landing. Whatever it was, I decided I was lucky to escape without eating sh*t, thus, would not attempt it anymore.

To watch Travis go off of different features is amazing. He may not have cared for his technique or how his Stumpjumper handled some of the time, but damn. Travis is much braver than I when it comes to certain things. I mean, look at him! He's like 50 feet in the air or some sh*t! 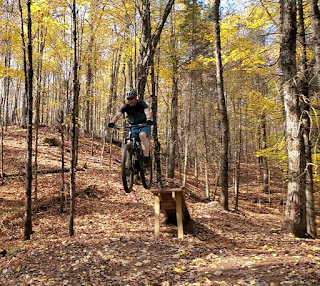 At the end of our ride, I was feeling extremely down. I felt like I had taken us down a turd slide that plopped us into a proverbial pool of sh*t. It wasn't the ride I had been expecting, and I know that I had a hard time trying to stay positive when a bunch of stressful crap was looming over my head.

After we made our great escape to the new motel, we grabbed food at the grocery store and ate in our new and comfortable room. I had been doing some heavy pondering as we had run into a fellow right before we started on the Dirt Candy trail who lived in Bayfield, Wisconsin. His local trail system is the Mt. Ashwabay trail system and he said it was absolutely awesome. His directions were that it was "40" minutes away....and by that, it's really 1 hr and some minutes away. (Haha!) Either way, with a fresh start/fresh room and feeling more uplifted and motivated, we decided that we should make the drive on Saturday to check out Mt. Ashwabay. Ultimately, our travel plans for next year will be more Minnesota based if all goes well, so we didn't want to miss out.

My research ahead of time chatting with mountain biking friend, Brady, made it sound like it could be potentially awesome. You do have more climbing than in Hayward/Cable, but you have more downhill, too! Plus, they have a trail named Trogdor! We had nothing to lose after a somewhat crappy 24 hour time period. This could be just what we needed.

Breakfast on Saturday was from Perkins, which was within walking distance. Travis ordered a breakfast that could have fed probably 3 people, and I had a California Eggs Benedict. I have no complaints. Yoke-y egg, avocado, and hollandaise sauce....happy Josie.

The drive to Bayfield was nice and it felt like we were heading back into Copper Harbor territory (almost) and the overall feel and vibe of the area was pleasant. I appreciate Hayward, but this felt more...I'm not sure...Homey? Plus I could say hi to Lake Superior once more! 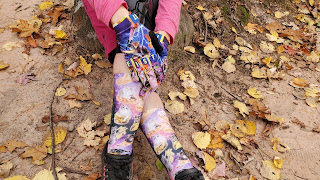 For being a Saturday, the trailhead we parked at didn't seem too busy. I wore bright colors as hunting season was happening in Wisconsin, plus I figured I (we) would be more noticeable to other trail users if I was a color bomb. I was also super excited that my socks matched my gloves.

The trails at Mt. Ashwaby are well marked, plus you ride several directionally, which eliminates the worry of riding them "wrong." 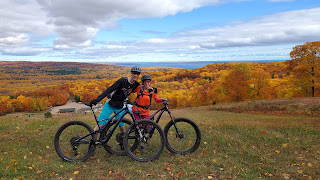 As soon as we were able, we hopped onto Trogdor and made our way to the scenic overlook. A kind person offered to take our photo (Finally! A non-selfie photo!) We proceeded to make our way down, which was an absolute blast. 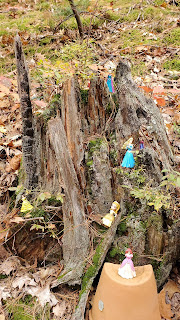 We ended up riding Hoot'n Hollow, which had a healthy dose of climbing but some awesome fun downhill. I noticed on an uphill climb that someone had decorated a tree stump with some Disney princess figurines. I was so busy looking at the decorations that I didn't pay attention to the climb I was on and my back wheel zipped out over a tree root. Ha!

After we rode the trail we took a short break near the intersection where several trails meet up. I saw some riders coming up a trail and saw Jay Henderson. I've not met him in person, but I know him from images that his wife, Kristy, posts. Kristy is someone I interviewed a few years back for Josie's Bike Life, and she's also a fellow Specialized USA Ambassador. I saw someone who I thought looked like her coming up and called "Is that Kristy?!" Yeah! I finally got to meet someone I've known through the magic of the interwebs. How fun! 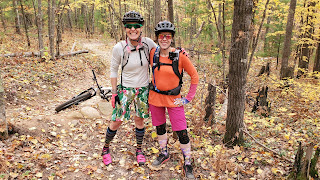 We took the group's recommendation of riding Tsuga Daddy next, which is also the longest trail in their trail system. (6 miles) and yes, it was fun. Probably would've been more fun on a bike other than the Stumpjumper, but it was still fun.

What I thought was cool was to see literal families out mountain biking together. You'd see a mom, dad, and kid(s) out having a great time. Mt. Ashwaby really has something for everyone, and for those who are experienced riders, you have features off to the side you can go off of, or you simply learn how to ride fast in a controlled manner, or you can challenge yourself with some technical climbs on certain trails. 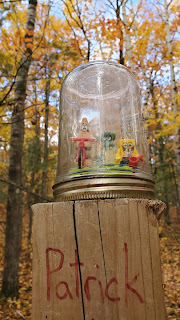 We were there for a few hours and rode every trail in the system and had logged over 20 miles of smiles for the day. It was the first time since riding The Flow trail in Copper Harbor that we both were complimenting each trail we rode after riding it. There was always just enough fun descent to make even the more challenging trails totally worth it! I give this trail system a 10/10...highly recommend it. Honestly, I want to come back and ride these trails before riding the Hayward/Cable trails again. They were that darn good. 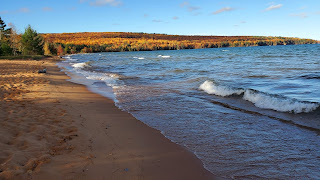 We stopped at a park on the way back to Hayward so I could see Lake Superior one last time. It was a sandy beach, so I wasn't going to be able to rock hunt so much. It was still pretty to see, and I always love hearing the sound of water crashing against rocks/shore.

When we got back to Hayward we stopped at the grocery store to pick up food for our supper, I bought one last round of beer and headed back to our room. I was again happy and feeling rejuvenated, which was the point of our trip: Spending quality time together outside of the bike shop while mountain biking new trails.