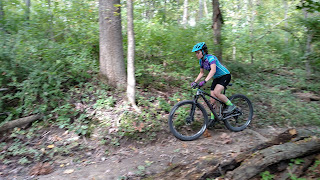 As we enter into the fall season, Travis and I are able to find time to escape Decorah to go on some mountain bike adventures elsewhere. One of the locations we were interested in exploring was the trail system(s) in La Crosse, Wisconsin. We were told that the trails in that area were going to be similar to ours, yet different at the same time.

Always curious about seeing what else is out there, we made it our destination as my day-after-birthday, birthday getaway. What makes La Crosse so fun is that it's not terribly far away when it comes to the drive. I'll admit, I've had my fill of 5-hour one-way drives for the time being, so less car time for a trip was a treat!

We were given directions to Hixon Forest Park, being told that there was a trail that started there that would take us over to a cul-de-sac where we could ride to the other off-road trails from. That way we could get to the trails quicker and have a fun downhill trail to ride back to the truck. The climb would be easy, but it would go on for quite some time.

If you are going to park at Hixon, be aware that there isn't a chalet- but you do have a port-a-potty. I would recommend having tissue paper with you in case there is a toilet paper shortage. There may be a good number of vehicles parked there- many of those will be hikers, walkers, and runners. The trail is two-way, those who are coming down the trail are to yield to those going up the trail.

The trail from Hixon to the housing area is easy riding- just a lot of climbing. There isn't anything technical about the trail (that we were on) and you can take a break and visit a scenic overlook. The views were beautiful!

Once you get to the gravel path that takes you to the housing area, you take a right and follow it to a road. Take another right and you will eventually see the "golf ball" at the weather station. That will take you to the next trail head that you'll find the HPT trails. Again, you will find a port-a-potty, but no where else to change if you were to drive there. We weren't put off by changing quickly in the truck when we were at Hixon Park but if you want guaranteed privacy- stop at a gas station or drive to the location in your riding clothes.

Anyways...I was excited to see a large kiosk with a big map set up showing the HPT trails. I have yet to figure out MTB Project, so having photos on my phone of a map was pretty stellar. That didn't necessarily help us with everything, tho. We made our way around the prairie path and went into a trail called Twister. It was a fun trail but one we should've probably saved until closer to last as it popped us right back out on the prairie path. Oops! So we went on the prairie further until we came to the entrance of Buckthorn. We rode that until we hit Hill Pig and then decided to try OB1; that is when the challenge began.

OB1 was a technical trail where you definitely had to be a Jedi in order to ride all of it. It was hit or miss for me in spots. I'm not super great with bigger logs and/or rock sections, I would say out of my riding those would be the weak spots. In Decorah we don't have too many areas in which I can practice- tho having a few things set up for practice in our yard is on my wishlist!

There was a moment when Travis asked if I was okay with what I was riding. He was able to ride everything almost flawlessly and I was struggling, that's for sure. My pride was definitely borderline between plummeting and staying stable. I picked the trail, I would tough it out- and I wasn't going to complain. My confidence with what I was riding was not high, my bike wasn't the best one for the job- something with larger tires or more suspension would've been helpful. I was feeling insecurities I hadn't felt for a long, long time. It was humbling to be in the position I was in- I felt like I did when I first started riding off-road. Anxious and intimidated by what lay in front of me- do I give it a go or play it safe? I did just as I encourage new riders to do- observe what's in front of you and if you're feeling okay about trying it- do so. If not, walk it and don't fret.

We made it up a climb of a trail and were at a fork in the road. We wondered "Where the heck do we go from here?" and watched two riders bomb down a trail. It looked super fun. We decided "Let's try that!" and it lasted all but a few moments. We ran into the fellows and Travis asked them if they were locals. Jed and his friend were kind enough to lead us out of the section of trails we were at and take us to the other side. Jed has done trail work in the La Crosse area for 10 years and was super helpful with explaining the lay of the land!

It was wonderful to have guidance and I greatly appreciated when they waited up for me. Allergies along with being on new trails had me feeling a bit sluggish. I was feeling self-conscious and totally battled with myself on if I should apologize or just be thankful that the guys would wait up for me. I opted for the latter. Eventually we came to the group of trails and they gave us some options on where we could go. We started on French Connection and eventually hit up Skeeter and Stinky's- If I remember the trails correctly, I really enjoyed Stinky's. It had tighter turns, more hairpin style and some fun sections that were slightly technical. You rode so fast thru it that you didn't have a chance to worry- which was great! I definitely felt like I had a boost of confidence gained after riding that trail.

All in all, I would say that the adventure out of town to the trails of La Crosse, Wisconsin were worth it. I had my butt handed to me a few times but I also had some great accomplishments as well. You could definitely say I was not bored! It reminded me that I have quite a ways to go yet when it comes to feeling confident technical features. I had to be okay with feeling nervous and anxious; beating myself up over feeling inadequate on what I couldn't ride wasn't going to improve things. I also had to suck down my pride and accept that I was not going to be as fast as the guys were, and believe that it's okay. 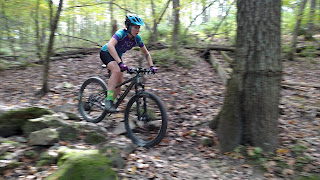 Embrace the challenge vs. working against it; as easy as it may not be at times, it will make the experience more worthwhile.
Labels: bike life explore Hixon Park HPT La Crosse mountain biking personal Wisconsin women bike