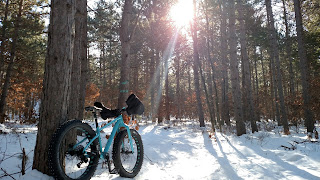 One of our biggest regrets last year for Travis and myself was missing the chance to ride up at Levis on their groomed fatbike trails. I distinctly remember the feeling I had when we had made a solid plan to go, only to have our parade rained on. Literally.

Warmer temperatures and rain/snow were not going to provide the most positive experience for us, so we stayed in Decorah and had worked on my riding the proposed PWC course instead.
Needless to say, our afternoon was not as eventful as we had originally hoped.

So, when winter arrived this year we made a solid plan: get up to Levis before there is potential of it getting too warm. NO EXCUSES!

Travis' birthday is at the end of January, so we figured that sometime in January would be okay for a Levis trip. We scoped out potential weeks that would work schedule wise for me, and it came down to two. January 12th or the 19th- of course when the 12th rolled around it was bitterly cold and we weren't entirely keen on driving out of town to ride trails in below zero weather. That week I stuck to our local trails and had a glorious ride, but Levis was on the brain.

Going on a planned bike trip is almost like waiting for Christmas morning for me. The 19th rolled around and I was so, so ready! The drive was simple and we were well stocked with ample amounts of snacks. Levis day means Hostess doughnuts, a Surly flask filled with Fireball, and a bag of delicious Sun Chips. (Yes, mom, we had some healthy snacks, too.)

The weather did not get as warm as it had been guessed, so we spent a good amount of time the night before planning our riding wardrobe. Of course, true to fashion, decisions fluxed back and forth the morning of. Either way, we had plenty of clothes for during and after to keep us feeling comfortable. Never forget the power of dry socks!!!

When we arrived and were ready to roll, I had Travis take the lead. I had my computer zeroed out, curious to see how much we would ride. With luck, we would be riding a lot and I wondered if I'd hit the 20 mile mark. I haven't ridden 20 miles in the snow and I had signed up for the 20-mile portion of Frozen 40. This would be the inaugural training ride- basically seeing if I could do it.

On our adventure- we hit up a trail that we didn't ride during the fall called Goat Dance. I must say, I think this might've been my favorite. There were portions of it that were super fun, and if I were to describe why- I couldn't tell you. I loved some of the scenery from riding it, which was breathtakingly beautiful. Downside of colder than hoped for temperatures- very few pictures.

Another trail I really liked was named something that had Bear and Dump attached. Either way, some of the downhills on that were SUPER fun. I think I enjoyed them during the fall, but I'm pretty sure I had caught a sandy area and flubbed up. With hardpack snow, I totally aced it. It was a fun up/down/up/down for a bit.

Another thing about riding at Levis was that I had gotten over my fear of some of the bridge structures. Great thing about snow and frozen ground- you have an easy way around if you're not feeling it. The other plus? Snow is piled up under the bridge, so it's pretty flush against it and gives you the perception that you will not fall far.

Without Travis speaking up, I chose to go over a couple. My confidence increased and I found myself gingerly trying a few more. I don't think he knew at first, but once he saw for himself I had taken initiative to do something that had scared me previously- he had strong words of encouragement!

All in all, it was such a treat to ride the groomed trails at Levis. It was a much different flavor than our local trails, but I enjoyed it very much. It was great to be able to ride trails with such flow- I rode fastest that I have ridden in snow this year- coming out with an average similar to when I rode my fatbike before the snowfall.

We rode a little over 20 miles of trail and didn't even mind that we had ridden some of the trails twice- going both ways really can change it up! We had ridden about 2 and a half hours and we were totally ready to have some real food in our stomachs. I know I will need to figure out a way to give myself some nutrition during my ride at Frozen 40. Towards the end of our riding my legs were feeling a bit heavy and I was feeling that trademark feeling in my stomach that indicated I was ready for something. I tend to get so focused with riding I negate all thoughts of fuel- Travis was the one who encouraged it. I would've just pedaled myself into a stupor. 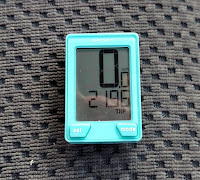 Our clothing choices were adequate for the cold start. It was around -3 when we started and had bumped up into single digits by the time we were done. It took awhile for my hands to warm- it was around the time we hit Goat Dance that my digits were past the burning/frozen feeling. My feet on the other hand, I have not found a great method for those yet.

Winter helmets. Love them but after 20 miles of riding I was ready to kick it. I'm glad I wore it, but man- my neck was thinking otherwise.

For additional face protection I used this nifty stick face balm from JTreeLife: Winter Stick SPF 15
I'm not great with keeping a neck gator or balaclava up and over my nose/mouth, so I use this on particularly cold days to help protect my skin. I had my face out all afternoon- of course a concerned Travis questioned my sanity. I, however, was completely comfortable.

We ate lunch at Re-Pete's. We came at an odd time, so there was literally no waiting around to get served. We had huge eyes and ordered appetizers: cheese curds and fried pickle chips to start. I found out that they make their own pickle chips, they were great! (I'm not terribly picky, but I do like a good fried pickle. These were not at all soggy and the breading was great.)

Travis had ordered a sandwich and I got the Frisco Burger as I used to love them when Hardee's had them (before they got all huge-monster-patty on me.) It was so fresh, medium rare, and fabulous. Travis really liked his sandwich too. We left feeling gloriously stuffed, nixing the original idea to have dessert. There simply wasn't any room. 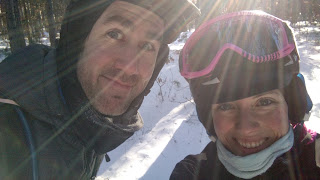 No trip to Wisconsin is complete without a detour to Woodman's in the Onalaska area. I spent some of my birthday funds on multi-packs of delicious IPA. Just so you know, Flying Dog beers are available. That is a treat for me as I haven't had any of their brews in YEARS.

It was an amazing trip for the two of us, Levis is always a fun time and I can't wait to go back again during the "dry" season. If all goes well, I'm gunning to attend the Sweaty Yeti next year for my out-of-town fatbike event!