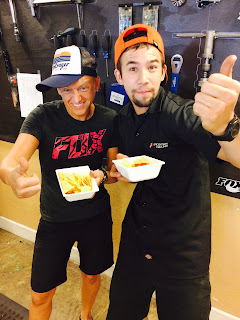 I’ve been a bike mechanic for 20 yrs now. (Dangit. how did THAT happen? 20 years?!). There’s not a lot of women who are bike mechanics, so I guess I’m sort of a unicorn of the industry. (It's been nice to see that changing a bit in recent years.)


I accidentally found the portal into the Bike Industry when I was about 18, and started working at a bike shop as a second job. Not too long after that, the allure of supervising a restaurant kitchen lost it’s luster (the timing of these two things were DEFINITELY related) and I quit the restaurant to work at the shop full time.

Anyways- college was not for me. I don’t really like it. I tried to like it, but I’m a well-rounded quitter with my 9 years of school from several different colleges, each one in a different major, and not a single degree to show for it.

So, I quit accruing student loan debt and went to work at the shop full time as a lead mechanic. After about 6 yrs in Baltimore, I went to work for Trek bicycles in Wisconsin, where I learned that I am also allergic to cubicles.

It’s a bike mechanics' life for me; its a vow of poverty, but it keeps me young (immature), reasonably fit, and stoked. I like fixing things, I REALLY like getting people stoked on bikes, and I REALLY REALLY like riding bikes. Mountain bikes are my vehicle of choice and lucky for me, I now live in the magical single track wonderland known as Santa Cruz, CA.

When did you first start riding a bike?
I believe that I was about 6 or 7. After several failed attempts and skinned knees, I finally tamed the wild stallion known as "Schwinn Stingray". It was mostly Yellow and Tetanus (some might call it 'rust') colored, and had a banana seat, which I fell off of many times before finally propelling myself forward towards freedom.

What inspired to start working at a bike shop when you were 18 and why has that passion stuck?
It was sort of an accident. I was supposed to be going backpacking through Europe with my best friend, Brad Bontrager, and we thought we would take bikes and wanted to know how to fix them, just in case. So, we went to our local shop, and offered to work for free in exchange for knowledge. I believe what happened next was “Well, we totally need to hire a chick…” and so, with a smug look on my face, I won working at the bike shop as a second job. ps. I ended up going to Europe alone, and I didn’t take my bike. But the portal to the bike industry had been opened, and there was no going back.

Can you remember back to when you first started working at a bike shop, what did you struggle the most to learn?
Yes. I can. and I struggled a lot with talking to customers, initially. My background was in running kitchens and you (thankfully) don’t really have interact with the public when you’re in the seedy underbelly of the restaurant. It was scary. Also, I had a terrible time with front derailleurs at first. They’re so easy to adjust, that they’re impossible at first.

What would you tell a woman who was interested in working at a bike shop?
Do not be intimidated. There is nothing to be scared of. It is a vow of poverty, no doubt. That is the first obstacle. BUT it is typically an amazing group of people you will be working with, and the vibe will keep you happier than you can imagine. I worked a cubicle job VERY briefly, and it aged me in dog years. Bike shop jobs age you backwards. All Benjamin Button and stuff. so go for it.

What styles of riding do you enjoy?
Mostly mountain biking, but overall, yes, there are others. 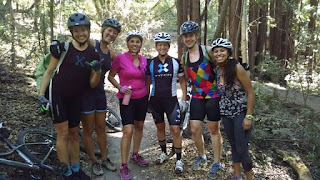 Do you remember how you felt on your first mountain bike ride?
It was sort of “what the hell?!! I HATE you guys!” I thought that mountain biking was what nowadays is referred to as “fire road”. And when I was directed down that small ribbon of dirt known as “single track” at TK Lawless park ….. well. I crashed no less than 5 ft into the trail. I was enthusiastic. but very very VERY bad at mountain biking.

If you had nervousness at all, what did you do or think to overcome it?
I have always had nervousness before races or before riding with new people or with…. with lots of things. I think maybe its in the best interest of this blog to maybe not say how I really deal with things, which is to continue to be nervous, have to poop a lot beforehand, and then do the thing that scares me anyways.

Clipless or Flats, what do you like?
Clipless. no question.

You write a regular series: Fat Tire Tuesday, for Adventure Sports Journal- what do you love about having an online outlet for your two-wheel adventures?
I love that so many people can relate to what I write about. It is always a happy surprise to read that what I write is relatable to other people, both cyclists and non-cyclists alike.

Have you had any biffs that were challenging for you on a physical/mental/emotional level? What did you do to heal and overcome?
Oh my god yes. I don’t even know whee to begin on this one. SO MANY BIFFS.

Only time and good rides can heal it. Don’t push it. Don’t try to be a hero. because if you’re not totally, honestly, completely confident… you’re going to get hurt again. Its a good mortality check when you crash- embrace it, ease back into it, and be kind to yourself. I know its a bummer that you’re freaked out by a few things now, but that will pass. Honest.

When you started out riding, what were some handling skills that challenged you? Do you have any suggestions for what helped you grasp them?
Hmm. I went too fast for my skill set, that is for sure. the things I wish just one person had told me when I started riding:
Look where you WANT TO GO. don’t look at the tree, you’ll hit it. don’t look at the rock, you’ll run into it. Much like life, the name of the game is just looking where you want to go, and not being distracted by all of the potential ways it could go wrong.

Also, get your butt off of the saddle in a technical section. (This probably also applies to a life lesson, but it seems like the pursuit of an analogy could very quickly go off the rails…)

Are there still handling or technical riding aspects that you find tricky? How do you not let that drag you down when riding?
I remain inept at riding anything that is narrow and off the ground, ala the North Shore. I cannot for the life of me ride the length of a 2x4 if it is even a few inches off of the ground. There is no good reason for this, being that I can keep my wheels aimed like a sniper if I need to steer my bike along a mile long, tires width, ice channel… but there you have it. I don’t let it drag me down by avoiding it entirely. (I mean… isn’t that the best way to handle a problem? Ignore it entirely?) Hm. When I re-read that, it doesn’t sound like such good advice.

Tell us about your bike(s), what they are like and why did you choose them?
Well, due to the fact that I just went to live in Australia for 3 months and sold a bunch of bikes to finance that adventure, I am down to a paltry 3 bikes at the moment. That’s right. I went from 11 bikes to 3 bikes in a matter of months.

So, what I still have in my stable:
A touring bike that has seen many miles, many smiles, and many adventures across the country.
My townie which is a single speed carbon road bike with super moto style handlebars. It’s my cruising vessel and I love it.
A Bontrager Titanium Singlespeed, built with love and ridden with reckless abandon.

What do you feel deters women from getting involved with cycling? Especially mountain biking?
Involved with cycling: not enough other women to do it, not enough advertising to encourage it as a lifestyle, and too many shops that - in spite of best intentions- are simply not welcoming to women.

mountain biking-
honestly, its dirty, bleedy, and bruisy. It can be scary. Doesn’t matter how good you get at it, there is a greater chance of not being on the right side of gravity when you are mountain biking. I think that the perception of the risk is exaggerated, though. It doesn’t have to be the x-games out there. It does have to be a commitment; both mentally and time-wise. And locationally, its a lot easier for some women to get into mountain biking than it is for others- I’m spoiled rotten living within a 5 minute ride from sick single track in Santa Cruz. But I’ve lived places where it is a 40min drive, minimum, to get to a trail head. It’s much easier to just step out the front door with a road bike when you have a tight schedule.

What do you feel could change industry-wise and/or locally to encourage more women to be involved?
Plain and simple: a living wage in the industry. 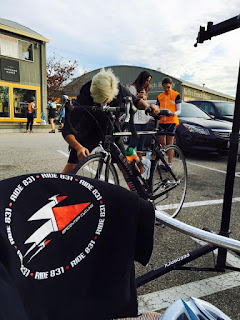 What inspires you to encourage women to ride?
Hm. I suppose its the same thing that inspires me to encourage ALL people to ride. Watching someone that was a total beginner improving until you realize that they are just CRUSHING it barely a year later. Seeing someone that was fresh to cycling just months ago, grow into a position of mentor and leader to the next wave of new riders coming through. The comradery that comes from riding together. The way all things can become supportive, fun, and non-assuming when a group of women get together to ride bikes.

Tell us a random fact about yourself!
I will not eat red M&M’s. some sort of half-fact misinformation in first grade made me think they were going to be the cancerous death of me, and I’ve been unsuccessful in shaking that particular neurosis.(Pshht… no YOU’RE weird...)
Labels: interview involved mechanic mountain biking women bike