The Not-So-Rolling Rollers and the Small Giants. 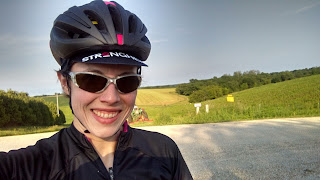 It was about 9 p.m. on June 12th, rolling into the yard on our bikes after finishing what we would consider an "epic" gravel ride.

Per usual (which has only been a couple times) we started off our ride on Sunday without an actual destination or mileage goal- just get Josie some hours in the saddle.


We figured a route similar to last Sunday would be good, so I can keep getting familiar with places, however, we'd switch it up a little so I could get a feel for the general location. I'm terrible with directions, I don't read maps, and I have no internal compass. If you ask me which way is North I'll look at you with a blank stare and silently wish you would kick yourself in the bum. Yeah. I'm not proud of it- but it is what it is. With the riding, tho, I'm doing my darnedest to get acquainted the old fashioned way, so with our rides there is no use of magical Google Maps or any some such "technological advancement."

We went a route that we had gone once before, but a few years back that would take us past Travis' mom's house. From there, I'll be honest- I'm lost. I encountered my first dog that scared the crap out of me- thankfully it just gave us warning barks and didn't pursue. "My anxiety is not meant for this" I said to myself.

We ended up on a road that we were looking down last week. We had stopped for some snacks, watched a farmer mow a field, and Travis gave me the lowdown of the general location. I attempt to remember. I appreciated the view as there is something very soothing about being out on the gravels. I suppose it's because it reminds me of home.

We continued on our way, not really sure where we would end up- we crested a hill and came to Madison Rd. A decision of epic proportions would be made....left, right, or straight. Travis had a general idea of where we would end up if we went either sideways direction, but straight would lead us to a semi-unknown. Let's go for the unknown. I didn't know how many additional miles I would accumulate if we kept going forward, but it would be intriguing to find out.

I was completely lost and that was okay.

We encountered another dog or two, again all bark and no bite (thankfully). Eventually we found ourselves looking across HWY 9. I want to pretend like I knew where we were at, and I think I might have- but I wasn't sure therefor....no. We crossed. Travis said that if we could find a left turn, we would be able to make our way back to town. We learned rather quickly that the countryside is not set up with "square blocks" and our left turns were driveways, thus we continued further away.

At one point we rode by a field and startled a doe with her wee fawn. The doe ran across the road and the fawn hightailed it further into the field. That fawn leaped the crap out of that field...bounding thru flocks of birds and around round bales. It was hysterical yet at the same time we felt bad and hoped that the doe and fawn would find each other quickly.

We rode and rode some more. Eventually we came upon a sign that said "Bike Crossing" and it turned out we had hit somewhere along the Prairie Farmer Trail. Either way, we would end up biking to Rideway or Calmar if we stayed on it. Part of me thought it would be neat, but then we came to another crossing where we could reunite with gravel and I decided that would be more interesting. During our ride, Travis saw the windmill that is located on HWY 52, so he said we would aim ourselves towards that. Surely we would hit familiar ground! 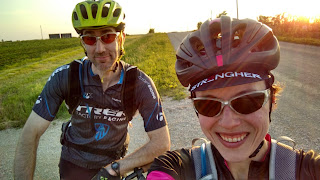 During this ride I encountered many emotions- there were times when I thought I would be able to power up what seemed like a fun roller and find myself spinning it out. My legs would go back and forth between feeling very capable to feeling like I stuffed weights in my socks. I had to remind myself "drink water, damnit." There were times when I felt hungry, yet I biked thru that feeling of needing to eat if I hydrated more and simply ignored it- which doesn't really help for bringing back energy.

I hated the thought of stopping because when we would get going again my legs would threaten mutiny. I found for a long distance (so far) breaks don't energize me, they crush me.

Eventually we were face-to-face with Jewell's Skate Country and Travis knew exactly how to get us home. We stopped for a break as hunger got the best of me. I managed to eat a bite of bagel Travis had brought and decided it was the most awful thing I could've put in my mouth. Under other circumstances- I enjoy those bagels. Today it was like dry cardboard for some reason and I didn't want to take effort to chew it. Travis gave me a Clif Blok to give me a different flavor and we continued on before the bugs ate us. We would ride the road until we hit a spot where we could get onto the TRT due to our available light. Oh Middle Calmar Rd....you can pack a punch in some spots...but for conditioning, I guess it's good to get used to putting yourself thru some suffering.

We finally hit the TRT, and it wasn't quite the location Travis thought it would be. Either way would have a climb to it and one was far worse than the other. We went (without my speaking) the favored direction (counter clockwise) and finished off the last bit of climbing before you ride down the switchbacks.

We booked it on that trail, even with my tired legs, I managed to keep a solid clip and ride hard. The only hardship of our final leg was the bug that got lodged in the recesses of my throat. Water couldn't seem to dislodge that little critter. Eventually coughing, water, and spitting brought me relief, but man, it sucked for a bit!

It was delightful to roll into our yard! We both felt accomplished; I was happy to have ridden with minimal breaks- but I knew I needed to work on the nutrition aspect more. My muscles were tired, but not shot. Supper was to be made and you bet I had two beers instead of one! 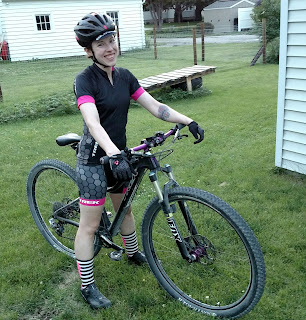 It's funny how I'm finding another way to challenge myself with biking. Granted, there are aspects of gravel riding that I don't necessarily enjoy (the periodic disrespectful driver and the loose dogs) but it challenges me in a different way than mountain biking. Climbs are longer, some are sneaky- others are surprisingly easy when far away they seemed like Goliath. I work my muscles and lungs to a different capacity- and it isn't easy sometimes. Heck no.

Sometimes I feel down because it reminds me that I still have a ways to go with endurance and breathing- but I won't let that stop me. I'm really intrigued to see how this will carry over into mountain biking...it's really the first time in years I could say I actually feel strong.

If you told me 5 years ago I would be doing any of this....mountain biking, casually racing, riding 40 miles in a day- I would've said you were nuts. Bikes change lives...and I'm forever grateful for how they have changed mine. #BikeLife
Labels: bike life gravel growth personal women bike