Pushing Past the Rollers and Uphills 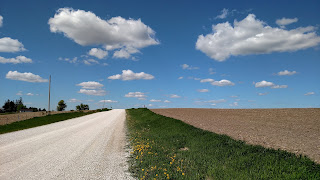 Early this year, before all the open slots for Chequamegon 40 were filled up, I decided that I would sign myself up for my "adventure of a lifetime" for the 2016 season. It was slated as an event to do at least one time, so I figured "why not?" I mean, I haven't really ridden 40 miles in one day on a regular, but I didn't perish with 20 miles in -8 degree weather. So, I think I could manage. However, this meant that I needed to do some conditioning.

I won't call it training, because I can really devote only one day to riding long distances and sometimes that day doesn't work out- but I would start to develop a comfort level with the gravel roads that run thru Winneshiek County.

Why? Because I grew up on a gravel road and only have awkward, and non-positive memories of it. I lived on a big hill in the middle of nowhere. I felt scared to ride down it and it was physically impossible for me to ride up it. There were neighbor dogs that would've surely chased me- so I was not very inclined to ride around the countryside for fear I'd be run down by dogs for I couldn't ride very fast. Let alone, my sense of direction and ability to put forth physical effort were minimal.

I was also nervous of the sense of unevenness, especially after fresh gravel was laid down. I felt like it was an unpredictable surface- and I was a fan of consistency, even as a child- and gravel felt like it played against all the rules.

Possibly, there was a subconscious decision behind joining the Chequamegon 40. Maybe it was to force myself to get out of my comfort zone and explore other areas with a purpose behind it. Doing it for conditioning is a choice and a way to force me out there- if I didn't have a reason to go, I'd be out on the mountain bike trails instead.

My first couple gravel rides with Travis felt a bit daunting. He'd be off a ways ahead and I'd be slowly turning my wheels with a lack of confidence and uncertainty clouding my head. Maybe this was wrong. 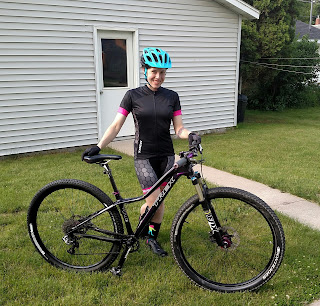 Sunday (June 5th) we postponed our off-road ride to give the trails a chance to dry out and opted to set out on a gravel adventure. I'm not sure what it was- if it was the empowerment of wearing a new kit or having different shoes on, but my nerves and anxiety were not overwhelming me. I felt more confident- something had shifted. I used my average speed as a focus and kept my gaze ahead- and we rode a mixture of gravel, pavement, and some easy singletrack (by Luther) and logged over 35 miles.

During the ride we had some headwind and side-wind at the beginning- wind is my enemy, but I kept my spirits high.
There were some climbs that took a lot out of me, but once it tapered off at the end I had a feeling of exhilaration.
It was fun to go after the rollers; working on my technique of getting after them is key.

The ride home was splendid, both of us maxing out our gear ratios on the smooth pavement. The question of continuing was asked, but we were both happy with our ride and I was more than ready to eat supper.

Tuesday came and I was hoping to have a long ride, but schedules weren't working out to prove as such. My friend, Barrett, had promised to take me on some rides to prep me for Chequamegon- however our schedules weren't happy to mesh much. I threw out the question with little expectation that it would work out.

Afternoon came, I was filled with lunch, and ready to roll. Barrett was still running errands so I opted to go mountain biking. I had in my head I'd ride a full set of trails, possibly in all three parks- I started in Van Peenen and went to Dunning's. My phone jingled the sweet sound of an incoming text. Barrett was ready to ride- I had to get going and get home to swap my bike and shoes.

I had already ridden over 9 miles. 9.26 to be exact. My ride was less than amazing, tho I did make the "Tombstone" climb on Little Big Horn, really my only saving grace for the off-road ride. After putting on some sunscreen, drinking some hydration mix, and eating some Bloks- we made our way to River Road.

I would not be making or breaking high averages- my legs were feeling heavy. My goal and focus was miles and simply to keep pedaling. There were some great stretches of gravel that were smooth and buff, then other stretches with fresh "fluffy" gravel that I've deduced I hate. I aimed straight and kept going- no mishaps occurred.

There were a couple climbs that really challenged me- I guess it's a good thing I have tenacity, because I was feeling pretty painful. At the top, after my lungs started to accept air again, I would feel a sense of strength take over. There were moments that it felt like pedaling was the last thing my legs wanted to do- but I kept going. Eventually we were back on River Road again- I had a decision to make: take the easy way home, or take the hard way.

Easy route would be to take the paved trail back home- no more climbing or gravel. Hard way would be going on gravel to climb up Whitetail and take the rest of Quarry Hill up and ride over towards Luther and home. More gravel. More climbing...oh climbing.

I questioned my integrity, but I felt I had to push my limits. I guess I like inflicting "punishment" on myself- but I know that at Chequamegon I'm sure I'll have several moments like that. I need to learn how to work thru them and get past those "bumps" in the mental road. 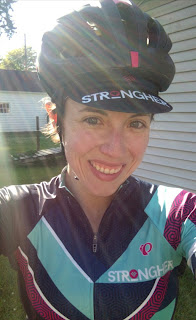 When it was all said and done, by the time I was at home I had logged 33.95 miles- I had biked over 40 miles with minimal breaks. My legs were wobbly- a hot shower and a cold beer were so extremely worth the extra effort.

I do not foresee a passion for gravel riding, but I can say that I do feel I will be able to make peace with it and use it to assist with cross-training for mountain biking.

Learning to push myself beyond my comfort zone- and feeling good when I break past the barriers I set for myself. Learning to keep going even when it feels like it's dragging out longer than I anticipated, and feeling accomplished when I make it up a climb that seems to go on forever.

It is humbling and exciting to see how I have physically progressed over the last year lung-wise. I'm becoming stronger- slowly but surely- and that makes my heart happy.