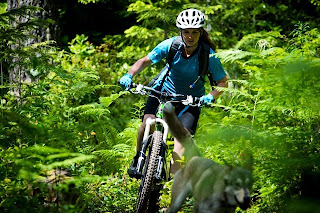 Meet Monica McCosh, whom you saw in a fun video: My Girlfriend Is a Mountain Biker. (Seriously, check it out!)

Her start with mountain biking wasn’t the smoothest and most inspirational, but she had the gumption to brush the dirt off and keep with it.

Like many others, she had to practice and work hard to get to where she is now with riding. It's proof that female mountain bikers are human! Also? Mountain biking is completely doable regardless of gender.

Monica lives in Squamish, BC and has Whistler Bike Park as her weekend backyard, which is likely every dirt-lover’s dream come true!

Currently Monica works for Easton Cycling as their marketing coordinator and is a Dirty Jane Ambassador.
Check out Monica’s Instagram!

When did you first start riding a bike?
Too young to remember, but it consisted of a department store brand bike and I was confined to the vocal trajectory of my mother.

What motivated you to ride as much as you have over the years?
At first it started off social; my boyfriend at the time was obsessive about it so I decided to join or be left in the literal dust. Later on, it became more of a personal motivation for improvement. Then it became social again with women’s groups and rides. Next thing we knew, we had the trucks with the bike rack and the gear & know-how; that was the independence stage when we didn’t need our boyfriends to fix our flats or tune our bikes. All that built a foundation for the next phase which is about bike exploration.  I’m heading to Sedona next week with my best friend for our first out-of-country bike adventure.

What would be your favorite competitive biking event and why do you enjoy competing?
I don’t compete anymore because I like riding trails that I want, when I want. However, I enjoyed competing for the thrill of pushing myself that extra bit. I suppose there is some serious skills progression that occurs when you push yourself to go further, take the quicker line, and lean into the berm for speed.

Do you remember how you felt on your first mountain bike ride?
I felt a heightened awareness of my face as it met dirt about eight times on one run.  I felt badass and embarrassed all at the same time.

If you had nervousness at all, what do you do or think to overcome it?
I would fist-clench the brakes. Now I have learned to feather them.  Seriously though, the best advice has been “If you don’t feel comfortable, don’t do it.” There’s no right or wrong way to progress, but the trail feature will always be there tomorrow.  If I even have the nagging doubt, that’s when my braking fingers tend to overreact. I’ve learned to progress in confident increments. Yeah, it has taken four years to get to the level I’m at now, but I have not had any injuries that have prevented me from working or tying my shoes [knock on wood].

You mentioned on your Dirty Jane profile that your first run had you going over your handlebars 8 times-It seems easy to say mountain biking didn’t come naturally? What inspired you to spend a couple seasons to better your riding rather than calling it quits?
Admittedly, I was not sold on mountain biking that day. The encouragement from the guys was enough to give it another shot. The main reason I stuck with it was the camaraderie I felt once I invested in some skills camps with other rad females. Suddenly, we became our own posse and felt self-righteous in pursuit of our new-found adventurous lifestyle.

Did you work on your skills solo or did you have assistance from other friends who rode?
Best thing I ever did while learning was take a women’s skills camp. Yeah, I learned new techniques which were very helpful; but I honestly feel the best thing about those camps is the networking. You meet other rad females who inspire you to ride your bike - and you usually end up doing that together. I found girls who absolutely rocked gap jumps and drops that I found myself nervous to lead into so they would lead and I could see their line and match their speed. On the next section, the steeps were my forte so she would ride behind to spot the line and technique. “Feeding off each other” is a cliché for a reason.

When you started out riding, what were some handling skills that challenged you? Do you have any suggestions for what helped you grasp them?
Cornering was a challenge because I never trusted my tires (or skills) to really lean the bike into a berm. Learning and practicing that bike-body separation is key. Even if you have to consciously tell yourself “look through the exit,” or “lean into it” the whole way down.

Are there still handling or technical riding aspects that you find tricky? How do you not let that drag you down when riding?
I still find “popping” tricky to remember, instinctually, when going off something bigger. I try to focus on it on little features throughout a trail like roots or slanted rocks and pop off those. Not that that particular act is going to make my popping skills any better, but rather it becomes muscle memory for when features come up unexpectedly that I may have braked on. 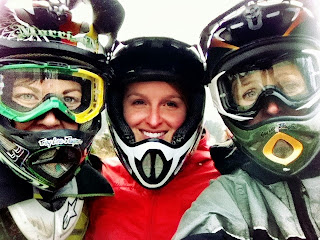 Do you use clipless pedals? If yes, what are some tips/suggestions for beginners that you would share? If no, are you thinking of trying it out at all?
I do not use clipless pedals, although I often consider it. Everyone has their own opinions about it, and I’m always game to try something new, but there is no pressing need to switch so it hasn’t happened yet.

Have you had any biffs that were challenging for you on a physical/mental/emotional level? What did you do to heal and overcome?
I can’t think of any that have been too difficult. I suppose when I first started riding, I would rack up some pretty scary-looking hematomas but like with anything, you just listen to your body and be good to it.

What do you love about riding your bike?
Fresh air, laughs with friends, sightseeing, backcountry adventures, and escaping from the rat race.

Tell us about your bike(s), what they are like and why did you choose them?
I absolutely LOVED my Banshee Spitfire (150ml front; 140ml rear). Transitioning from freeriding/bike park (where I started) to pedaling up to some challenging and technical descents, the Spitfire made it feel fluent and effortless. Coined the “downhiller’s trail bike” that little machine saw more downhill action than any of my other bikes because I knew I could take it anywhere and it would perform.  On bike trips where I wasn’t sure whether to bring a “big bike” or my trail bike, I would bring it because it did not matter what the terrain is like. I’m in the process of building up a Devinci Carbon Troy - my first carbon deluxe - and I’m excited. I haven’t ridden it yet, but it has some mighty big shoes to fill from the red-headed Spitfire I rode all last season. Looking forward to testing its mettle in the coming weeks.

What clothing/bike accessories do you love? What would you recommend to your friends?
RaceFace makes the best freeride-oriented women’s clothes, hands down. The styling, detailing, colours, and fit are all designed as if I would have done it myself. As for bike accessories, I could not live without a dropper post (bought a RockShox Reverb Stealth for my new ride).

How did you hear about Dirty Jane and what inspired you to become a Dirty Jane Ambassador?
Annka and Moe are from my neck of the woods (Squamish). I support Annka in anything she conjures up - she’s an amazing woman with a tremendously positive attitude. Who wouldn’t want to represent that?

You were recently involved with a fun short film: My Girlfriend Is A Mountain Biker- What made you get involved and how much fun was it?
Lead actress and friend of mine, Leanne Tompkins, texted me one night asking if I would help her and Matt Denniston of NSMB.com in this project. To be honest, I didn’t have many other details and I was weary of it being a cheesy girl power film about woman bikers. When I found out that Kristen, Product Manager of Sombrio, and Micayla Gatto, DH World Cup racer, were both going to be in it, too, I was stoked. Such a rad vibe with those girls. I think the best shots of the film were the outtakes of us girls in the truck chirping away and cracking jokes. Maybe those will resurface some day...

What do you feel deters women from getting involved with cycling? Especially mountain biking?
Great question. And probably one best asked to those women themselves. I won’t speculate or pretend to know what’s going on inside their heads. All I can say is that for me, the deterrence was not knowing how/when/where to start. Ignorance may be bliss to some, but mountain biking is my bliss. I’m happy to take newbies out and show them some confidence-inspiring trails.

What do you feel could happen to make changes and/or encourage more women to ride?
I think we could all do a better job of bringing at least one new person into the sport each season. If you have a friend or know someone who is always up for an adventure, likes to try something new, and is a closet-adrenaline junkie then take them mountain biking, damn it! 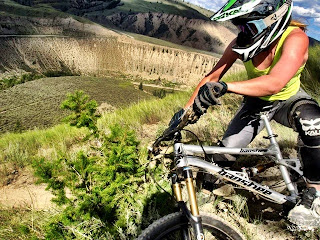 What inspires you to encourage women to ride?
Just knowing the party animal, city-slicking life I came from to one full of adventure, fresh air, and like-minded friends is enough to inspire me to encourage others to ride.


Tell us a random fact about yourself!
Mayo + mustard makes me gag.
Labels: interview