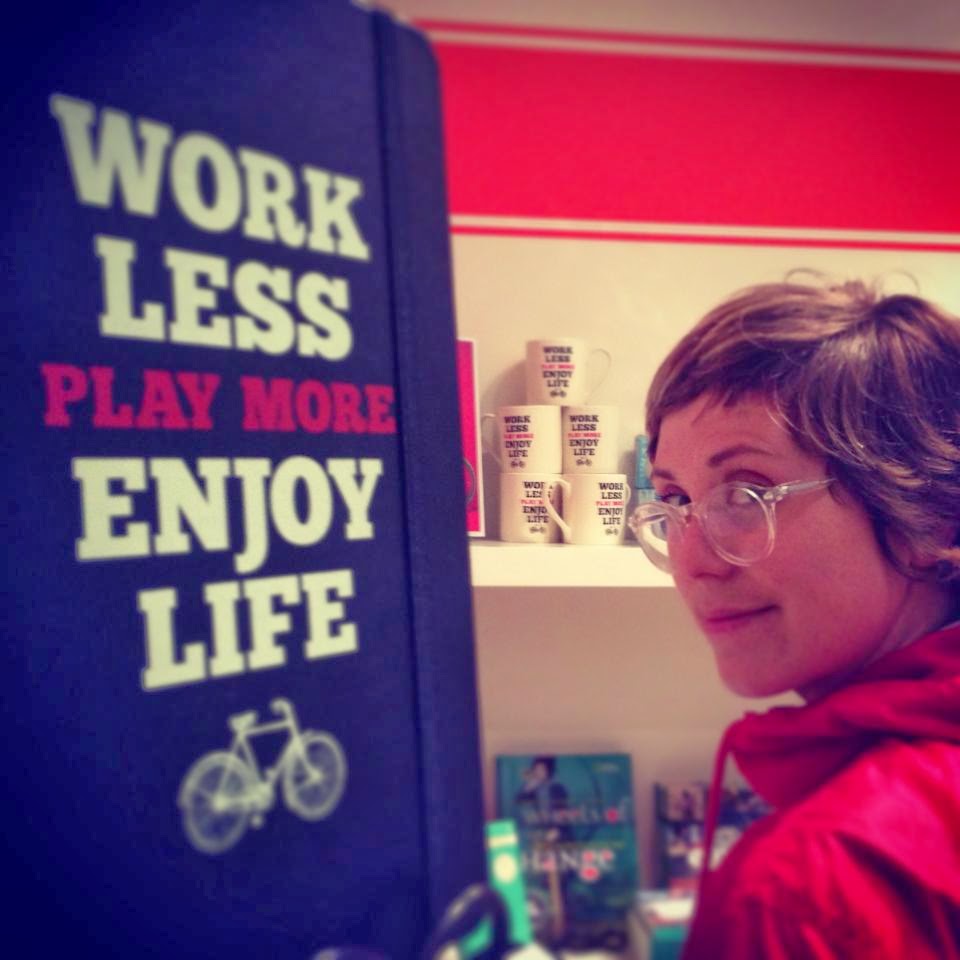 When did you first start riding a bike?
I've had a thing for bikes since my childhood but didn't really get into cycling the way I do now until college. I built out my first bike at a community bike library in Arcata, California.

It was a powder blue single speed Peugeot with the name Bjork etched into the top tube. I rode it everywhere. For my 21st birthday my father, an avid cyclist himself, got me my first "real" bike.

It was a Kona cyclocross - perfect for touring. I picked it up from the shop just before they closed and started riding north along the redwood coast with a backpack full of apples and my sleeping bag. I rode till I was tired, slept on the beach, and rode home the next morning.


What motivated you to ride as much as you have over the years?
Peripatetic tendency.

Have you competed in events? If so, what were your reasons for competing?
No, not my style.
What would be your favorite competitive biking event?
Any randonée that includes both ocean views and mountain passes.
What kind of riding is your favorite? (paved, gravel, mountain, etc.)
Varied terrain. CIty streets, backroads and gravel grinding all have their place.

Do you remember how you felt on your first mountain bike ride? (If not a mountain biker, how about first commuter ride, paved trail ride, gravel, etc.)
Elated. Unbound. It took all my willpower not to go feral on my first bike overnight.
If you had nervousness at all, what do you do or think to overcome it?
Truthfully, no. I've always had a somewhat reckless and unbridled enthusiasm when it comes to bicycling. For better or for worse.
Do you use clipless pedals? If yes, what are some tips/suggestions for beginners that you would share? If no, are you thinking of trying it out at all?
I rode clipless for years and have recently taken to platform pedals for their versatility and utility. Even with my amply soled ultra-slick leather high top DZR clipless shoes I was still limited as to what I could do. No skateboarding. No hiking. No walking on slippery museum floors.  Right now I’m all about VP’s Thin Gripster pedals because platforms + hiking boots = bike and hike = winning.
If you are a commuter what are some of the challenges you face and how do you overcome them? I live in Seattle. It rains, alot. I overcome the weather by reconciling myself to just getting wet. Luckily, the human body is pretty waterproof. I keep a towel and extra change of clothes at my office - just in case. But mostly, I’m just kinda damp. I also work part time as a courier and have to deal with a considerable amount of  traffic, both cars and other cyclists. I sometimes prefer riding in the street to taking bike trails during busy commute times. The Burke Gilman trail during the 5 o’clock hour is my personal hell populated by cyclists decked out in day-glo performance fabrics, thoughtlessly placed headlamps and seizure inducing flashers.


My small town has one actual, painted, bike lane. It's on a street that is very busy and one that I have no desire to bike on. I've never been anywhere that has multiple bike lanes or actual bike lane traffic. Would you be able to share a little on your experience with the bike lane set-up?
I grew up in a small area outside Yosemite National Park, there are STILL no bike lanes in that cycle-phobic mountain town. I hear ya. Once you get past the polka-dot jersey worthy hills of this city, Seattle is an amazing place to live and ride a bike. There are well marked bike lanes EVERYWHERE, but that doesn't always make for safer cycling situations - but I think we are on our way. Sometimes I feel that perceived safety without due diligence leads to general carelessness and douchebaggery among both cyclists and drivers.

Do you commute even if the weather isn’t ideal? Why or why not? If yes, what do you do to make it more tolerable?
Yes, because when you arrive to your destination you feel like a effing viking.
Have you had a bike biff? If so, how did you recover on a physical/mental/emotional level?
Not in a single track snarled root sense but, yes. Three years ago I was involved in a hit and run on the way home from an art opening. I flew forward over my handlebars, took a break lever to the gut and broke my fall with my face.


After limping home through friday night crowds with my busted bike over my shoulder bleeding from the face my roommates wisely suggested I go to the emergency room.  Good on them because it turns out that in addition to having shredded the left side of my face I had significant internal bleeding from a level 4 liver laceration. Oh, and a concussion. The treatment for which was a significant amount of plastic surgery on my face (a law in Washington as it turns out) and 3 days of laying completely still while my liver rebuilt itself. Fun.


While I was in the hospital my buddy’s shop fixed my bike for free so I could start riding again as soon as possible. Getting right back on the bike allowed me to not let anxiety build up too much.


I also once rode my bike into a parked car but only sustained minor injuries, mostly to my pride.

Did the bike accident take awhile for you to get over? When I had my more "major" accident (stitches in my chin and a concussion) I had several "oh sh*it" moments of the flashback type variety. Going on my first ride was exhilarating, because I had to wait 2 weeks...but I still have some nervousness now over curbs. (I'll share more of my story at some point, promise! It's kinda dumb tho.)

My brain is still a little fucky from it all - poor short term memory and uncharacteristic bouts of depression from time to time.  After the accident I volunteered for a brain injury study with the University of Washington school of Medicine, they said it was quite common to have this kind of response. Other than that not much is different.  As far as getting back on the bike goes, I had to wait a full month for my liver to get to a place where it would be safe for me to exert myself and not re-injure it. I kept a countdown calendar and the first day I was able to get bike on the bike I did. First just for short rides to the store and to visit friends. Then day rides. I was back to my old habits of commuting, joyriding, and bike camping within 2 months.

The hardest part of recovering from a bike accident is being patient and allowing yourself the time to rest and heal. I had some pretty invasive abdominal surgery last year and had to wait 5 weeks (5 WEEKS!)  before getting back on the bike. Of course the first thing I did was decided to ride from Santa Barbara to Santa Cruz for a Museum conference. On day 3 in Big Sur I busted an internal stitch climbing up one of the many steep coastal grades. That hurt.  A lot. I was fine but it was a good reminder to be more realistic with my expectations when it comes to recovery time. Patience is hard.
What do you love about riding your bike?
Everything.


What inspired you to create a bike riding coffee group? Was it easy for you to target people and have individuals join or was it slow going?
I love morning camp vibes.  Hanging out and making coffee on camp stoves and the like, but I work full time. For now. Making an outside coffee date every week is a great excuse to chill with friends and talk bike adventures before work. Each week I post a new location and we ride out and find each other in one of Seattle’s many amazing parks.  This past week we met up on Foster Island and got to take a trail over narrow bridges, through gravel and dirt (dodging geese en route) to get to our morning coffee local. When we arrived we already had some good stories to share. I almost fell into the lake. Twice.


I’ve only been doing it as a group since early spring but I often make coffee outside on my way to work. I was inspired after seeing a series of posts on Facebook from an awesome shop in California called Ocean Air Cycles (http://oceanaircycles.com/2013/09/25/coffee-outside-2/) - the shop owner also reienlty did a great write up in Bunyan Velo Magazine (http://issuu.com/bunyanvelo/docs/bunyanvelo04). I started to notice the #coffeeoutside tag on all kinds of posts and came to the realization that it might be fun to host one here in Seattle. So far it has been amazing. Did you know there is also an association of Caffeinated Wheelmen? Yah, so that’s a thing. Your Tumbler account-not being fluent in much other than American English, a few words in Japanese, and counting alright in Spanish and Korean...I sense a French vibe? If so, what inspired that? (I have a friend who is a Luther College student and she is in love with French. She has gone to France a few times and will be leaving to study there again, much to my happiness and sadness.)
Ha ha! Sadly, my French is terrible AND I’ve not yet been to France. Most of the French terms on my website (all both phrases) are adapted from an art historical context. En PLein Air is an expression which means "in the open air," and is often used to describe the act of painting outdoors.

Cycle du Dérive is adapted directly from an essay titled Theory du Dérive or “Theory of the dérive”, written by Guy Debord in 1958. I highly recomend giving it a look over (http://www.bopsecrets.org/SI/2.derive.htm). Debord belonged to a group of artists, writers, and thinkers who likened the idea of an unplanned stoll to that of psychoanalysis - as you journey unstructured through the landscape you open yourself up to possibilities and encounters that you could otherwise not account for.  They called themselves the French Situationists. Or other people have referred to them as such. Either way - their ideas largely contributed to the development of and ideas around psychogeography, which is also fantastically interesting and a whole other series of essays. I will spare you my comments, though it makes for a good google search.


I am intrigued by the idea of imagining cycling as a form of making in the outdoors or as a interurban dérive - in a conceptual sense as I’ve never really cared for painting. I feel that motion and intention create a space for engagement. Sometimes riding your bike with a friend can be an artistic practice all its own. Thinking. Riding. Imagining. Riding some more. I’ve found that my barriers break down when I ride and thoughts are allowed to freely manifest without judgement. I have some of my best breakthroughs while riding. It is an active meditation and thought process for me. By reappropriating these terms I am hoping to translate a new space for creative engagement through cycling. We will see what happens.

Check out what Whitney is up to!