How did I find out about Tiny Fix? I was reading an older issue of Momentum Magazine and saw a picture of Kaz and fortunately for me, they mentioned the Tiny Fix website: Tiny Fix Bike Gang I was beyond tickled when Kaz responded and I was able to feature Tiny Fix in my blog! Check them out on Facebook: Tiny Fix 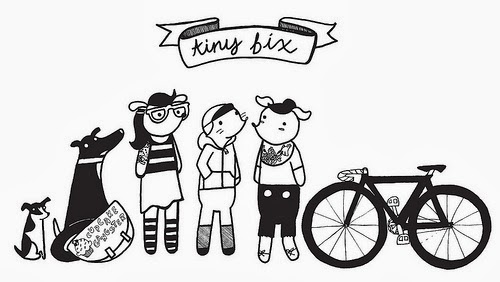 About Tiny Fix and what it means to me:
Almost three years ago, some friends and I joked around that we should start a “gang” of small women on fixed gear bikes and ride around, terrorizing the people of Chicago. Somehow this joke turned into a real, actual, tangible thing: Tiny Fix Bike Gang. And instead of terrorizing Chicago, we blog about cycling, women, feminism, advocacy, gear, and more; throw parties and organize fun cycling events; and just generally contribute a new and I think unique voice to the Chicago bike community. I am so incredibly proud of what we have done and what we continue to do, and that we have grown to include women of all sizes on all kinds of bikes. 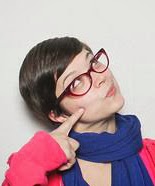 When did you first start riding a bike?
I rode bikes a lot as a kid, and in high school I didn’t have a car so it was how I got to my neighborhood after-school job. Then it kind of dropped off for a while as an adult and got back into it several years ago. I started out thinking I was just going to ride recreationally on the weekends, but really quickly I upgraded to riding as everyday transportation, which constitutes the bulk of my riding.
What motivated you to ride as much as you have over the years?
Riding a bike to work is so much more pleasant than my other option: taking the CTA. From my current house, it’s even faster than public transit! I also love that I can get exercise at the same time as my commute, which frees up time in my days. Riding places to hang out with friends is great too - again, it’s more convenient than public transit, cheaper than cabs, and more drinking-friendly than driving. Riding a bike is almost always the best option to get somewhere in this city, in my opinion.
What kind of riding is your favorite? (paved, gravel, mountain) and if you want to elaborate why, that's fine
I’m a city rider. I enjoy recreational riding - my friends and I have done centuries, and we did our first ever bike camping trip last year - but most of my riding is just getting around the city.
Do you remember how you felt on your first mountain bike ride? (If not a mountain biker, how about first commuter ride, paved trail ride, gravel, etc.)
Well, I’ve never mountain biked (there are no mountains in Chicago!) but I have raced cyclocross and my first cross race was a killer. If you want to learn just how out of shape you are, despite laying down a hundred miles a week on your bike in the city, try to race cyclocross. I didn’t even finish my first race, and was DFL (Dead Fucking Last) in my second. But it also was fun and crazy and exhilarating! The CX community is really supportive, friendly, and fun.
If you had nervousness at all, what do you do or think to overcome it?
I always get a little nervous about heading out on my bike if it’s a route I’ve never taken before or a distance I haven’t achieved yet or whatever. You never know what could come up. One thing that helps for me is being prepared: do I have a spare tube, pump or CO2, tools, etc. if something goes wrong? Sometimes I choose to not bring all that with me, but I think about my exit strategy: can I lock up my bike and come back to it later, or bring it on the bus if something goes wrong or the weather gets bad? You can never control everything but thinking through the most common scenarios and possible responses helps a lot.
Do you use clipless pedals? If yes, what are some tips/suggestions for beginners that you would share? If no, are you thinking of trying it out at all?
I have used clipless pedals and switch back and forth depending on the season, purpose of the ride, and which bike I’m on. I find clipless pedals great for long distance riding and touring, but they don’t really fit my needs for daily commuting and just getting around town. In the winter I wear warm waterproof boots, and in the summer I don’t want to have to change my shoes once I arrive at my destination. I’m also often riding my fixed gear bike in the summer and as much as I like to remind people that fixed gear bikes aren’t scary, I’m not really sure I want to add the clipless pedal complication to that mix. But really it’s mostly the shoe thing. I do, however, always ride with some kind of foot retention (toe clips and straps) because using plain platform pedals without any sort of retention just feels weird to me.


If you are a commuter what are some of the challenges you face and how do you overcome them?
I love commuting to work! But it’s not without its challenges. As much as Chicago has done to create new and better bike lanes, this is a big city and there are still large swaths that are completely without any bike infrastructure. Over half of my current commute requires riding on busy city streets that do not have a bike lane of any kind (other than those useless sharrows). This leads to the typical city cycling complaints: drivers not giving me enough room when passing, feeling forced into potholes and shoulder debris, having to worry about drivers and passengers in parked cars or taxis dooring me, etc.

The only way to really overcome this is to ride defensively and always be on the alert. Be assertive, take the lane if you need to, and signal your intentions clearly. After a while you get to be able to read the body language of cars - like, oh that car’s about to turn even though they don’t have a turn signal on, or this car is looking for a parking spot and may pull over at any second, or that car just pulled over so watch out for doors opening.
If you live where there is a snowy or icy winter, do you still commute? Why or why not? If yes, what do you do to make it more tolerable?
Most winters I usually still commute at least a couple times a week, but this 2013-2014 winter has not been friendly to what I would consider safe or prudent winter cycling. First of all, I should point out that my commute, depending on the route I take, is between 10-12 miles each way. So while some winter conditions may be tolerable for a shorter ride, a lot of times it’s just too much to handle for 45 minutes to an hour of being on the bike.

Riding in 20-degree weather is totally doable with the right layers. (Hooray for wool!)  But we’ve had so many stretches of single-digit weather before the wind chill, and I just find that too cold. And then, when the temperature does manage to creep up to a more reasonable level, we’ve gotten hit with snow after snow after snow. Unfortunately, none of the streets on my route are on any kind of regular plowing schedule so riding after measurable amounts of snowfall is also out. I tried a few weeks ago and ended up falling when I hit a pothole hidden by snow.

My Tiny Fix co-founder Lorena Cupcake recently wrote a post that I think does a good job of cataloging the many variables a person should consider when deciding whether to ride in the winter.

The lack of riding opportunities this winter has led to a whole lot of physical and mental angst, so I can’t wait for the slightest break in this below zero cold → several inches of snow cycle we’ve been stuck in.
Have you had a bike biff? If so, how did you recover on a physical/mental/emotional level?
Hah, I had to Google “biff” since that’s not a word I’d ever heard before! Anyway, yeah, I’ve fallen a few times but luckily it’s never been anything serious -- stuff like a newbie clipless pedals “d’oh” moment, or crashing into tree branches on a CX course, or the winter pothole incident I just mentioned. I’ve been so lucky that I haven’t had any more serious falls or anything involving a car. I have plenty of friends, including fellow Tiny Fix members, who have had some really bad crashes with cars that have led to serious injuries, major bike damage, etc. It’s scary, and for me it makes me ride really defensively in traffic. It also, unfortunately, makes me really resentful and angry at bad driver behavior when I see or hear about it.
What do you love about riding your bike?
On a practical level, I love the convenience, the affordability, and the exercise this late-30s woman who loves food and beer desperately needs. But on an emotional level, it’s that being on a bike feels like play, like I’m cheating at being an adult and get to do something fun and people around me are none the wiser. It’s those early weekday mornings commuting on Chicago’s Lake Front Path and seeing gorgeous sunrises over Lake Michigan and filling my lungs with fresh air. It’s riding home from a bar late at night on quiet, car-less city streets with friends, everyone giddy from a few beers and the fun of being social. It’s the sense of accomplishment and completely different way to frame my perception of self from that of an object to be looked at and judged to a subject doing awesome things like riding centuries or racing cyclocross. 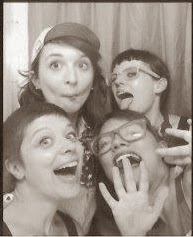