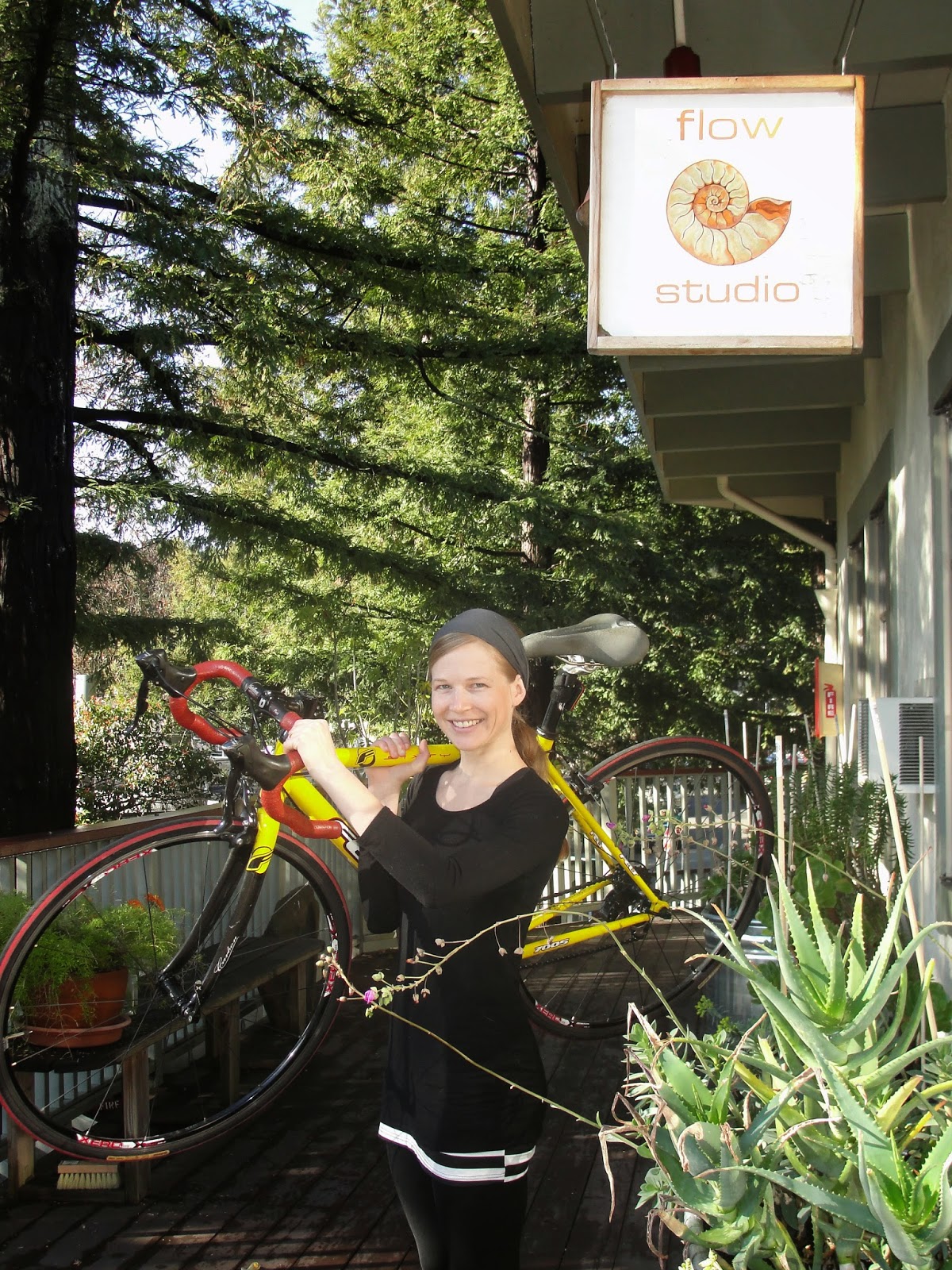 When did you first start riding a bike?
I rode around the neighborhood when I was a kid, probably from about age six to about age eleven. Then I got serious about ballet and was told by my teacher not to ride a bike as it would overdevelop my thighs—a ridiculous piece of advice for an eleven year old! But I stopped until about age sixteen, and then I took it up again, particularly when I lived in Honolulu without a car. I’ve been a daily bike commuter here in California for the past eight years.

What motivated you to ride as much as you have over the years?
I like the independence of biking. I also like to breathe the fresh air and get exercise without scheduling it. I feel faster and freer on a bike.

Have you competed in events? If so, what were your reasons for competing?
I have never competed in an event.

What would be your favorite competitive biking event?
I like to watch track races. If I were to compete, I think I’d like to compete in a track race. I like the speed and strategy and the fierce competition. I wrote a novel called The Velocipede Races, which features keirin-racing in an early twentieth century world. I loved doing the research for the race scenes.

What kind of riding is your favorite? (paved, gravel, mountain, etc.)
I prefer road biking.

Do you remember how you felt on your first mountain bike ride? (If not a mountain biker, how about first commuter ride, paved trail ride, gravel, etc.)
I remember the first ride I took after the ballet moratorium! It was mind-blowing. My older brother took me on a ride on West Cliff Drive in Santa Cruz, California, overlooking the Monterey Bay and Pacific Ocean. I hadn’t ridden in years, and I felt an incredible sense of joy and freedom as we sped along the path by the water. I actually felt my heart expanding in my chest. I wanted to bike every day after that.

If you had nervousness at all, what do you do or think to overcome it?
I’ve never been nervous on a bike, not even in busy city traffic or heavy rain. The thing is to make sure you know the rules of the road as they apply to you, the cyclist. After over ten years of almost daily riding, I feel as comfortable on a bike as I do on my feet—much more comfortable on a bike than in a car.

Do you use clipless pedals? If yes, what are some tips/suggestions for beginners that you would share? If no, are you thinking of trying it out at all?
I love clipless pedals. I can’t imagine riding without them, because you get so much more out of your pedaling action—you can pull as well as push and make use of  the full muscular capabilities of the legs. My current commute is a seven-mile straight shot with only two stop signs, so having the clipless pedals is a no-brainer. I don’t have any particular advice except to practice in a comfortable place until you get the hang of them—but if you have a significant commute, make the switch! So much better for your legs to balance the efforts quads and hamstrings.

If you are a commuter what are some of the challenges you face and how do you overcome them?
My main challenge is the cold in winter. I hate the cold. Even with three or four pairs of high quality gloves, I still get horrible chilblains all over my hands from riding in the winter. I’ve invested in better winter gear, wool leggings, wool glove liners, neoprene mitts, but I still have trouble with my hands. Next winter I may try some kind of heatable glove.

Do you commute even if the weather isn’t ideal? Why or why not? If yes, what do you do to make it more tolerable?
I ride in almost all weather—the exceptions being really heavy rain and severe frosts. I have a considerable climb and descent on my commute, and in the hard frosts, when the road is icy, that descent really isn’t safe on my particular bike. Also, I hate the cold. Luckily we only have one or two days like that a year.

Would you be able to share how it is commuting in your area?

I live in a biking paradise compared to most of the country, and my commute is just about ideal. My ride takes me along a rural valley floor surrounded by green hillsides, fresh air, and trees. The bike lane is well marked, as the route is a favorite of weekend pleasure riders. I don’t encounter a stop-light or sign until the final mile of the ride, when I pull into the bike-accustomed town of Fairfax, which is always full of cyclists. The motorists are pretty aware of our presence, though traffic can get a little hectic in the tight conditions downtown. Taking the lane is an important aspect of biking safely in that environment, and I don’t hesitate to do it to avoid parked car doors and to make myself visible.

Have you had a bike biff? If so, how did you recover on a physical/mental/emotional level?
I have had some good biffs. Two were due to riding in wet weather and hitting patches of slick leaves or mud. I’ve learned to pay more attention in those conditions—I’m a lot more careful when it’s wet. I got tagged by a car door a few years ago and flew over my handlebars. I rolled and had a few bruises, nothing more. Now I make sure to give myself space when there are parked cars in the lane. I do a lot of cross-training with Pilates, and I think that has been important in not being injured during falls. Lately the only place I fall is my own driveway—it’s gravel, and sometimes I brake too suddenly when I arrive home, skid, and eat it.

What do you love about riding your bike?
I love the sense of lightness and independence being on bike gives me. The actual motions of riding—the rhythmic use of my legs, the stabilizing of my center and arms, and the fullness of my breath—are also very satisfying. I feel fully alive when I ride.

What is something you would like people to know about bike riding?

Bike riding is better for your health than driving. People often seem afraid of biking, but they aren’t afraid of all the damage sitting in a car is doing to their bodies. The benefits of biking outweigh the risks. Biking also puts us in the moment, forces us to concentrate and pay attention, two skills that apply to every other aspect of life. It’s good learning and good practice.

Have you always wanted to be a writer?
Yes! I have always wanted to be a writer and have always been a writer. I’ve written stories through most of my life, starting at about age twelve. Sharing my writing is a new thing, but so far, it’s been very exciting and fulfilling. My friend, Beth Deitchman, and I run our own publishing company called Luminous Creatures Press. (www.luminouscreaturespress.com)

What inspired you to pick the subject(s) you did for your book?
My commute and the work that I do inspired The Velocipede Races. I teach Pilates at my studio in Fairfax, so I regularly witness to how physical endeavors can transform the psyche. I read a bit about the history of the bicycle and early feminism and applied the notion that becoming physically stronger changes how we think and encourages us to take risks to lead a more fulfilled life. Velo Races was born. I plotted the book and even composed sentences during my commute.

What inspired you to write your book? 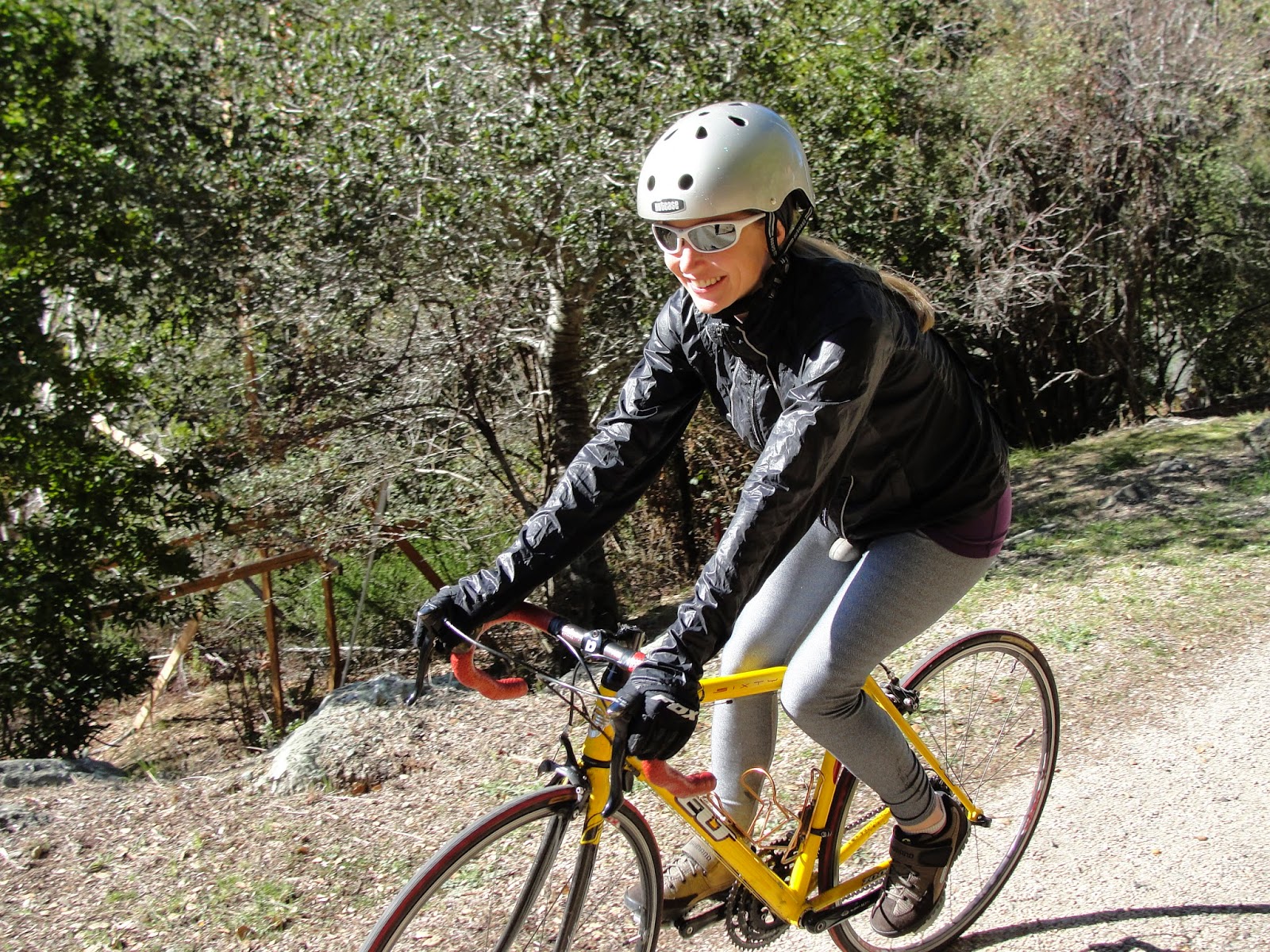 I first considered the idea of a bike-racing book while riding. I love the motion and the feeling so much, I wanted to express it. That naturally got me thinking about how our physical lives shape our mental lives. I read a lot of historical fiction, and so often the female characters in historical fiction are trapped inside their clothes and their inactive lives. I wanted to experiment with writing a trapped woman who escaped her position in the world via bike-riding. I wanted to fictionalize that process of physicality imparting freedom.

Do you see other bike-related books in your future?
I just finished a short spin-off story from The Velocipede Races that will be published by Elly Blue in the anthology Bikes in Space, Volume 2. It’s a collection of sci-fi and fantasy bike stories and will be available via Elly’s site: www.takingthelane.com. I have also written another full length novel set in the same world as The Velocipede Races, called The Secret Room, which will be published in May 2014. The Secret Room is a much darker story than Velo Races, but it does involve a few velocipedes, and my heroine from Velo Races has a cameo role. I have so many projects on the back burner right now, I’m not sure whether biking will feature in any of them. I do like the idea of a classic epic fantasy story where the questing party rides bikes instead of horses.

What is one thing you'd like to share about yourself that you think is interesting (doesn't have to be bike related-but can be!)
My other hobby is the flying trapeze.
Labels: interview