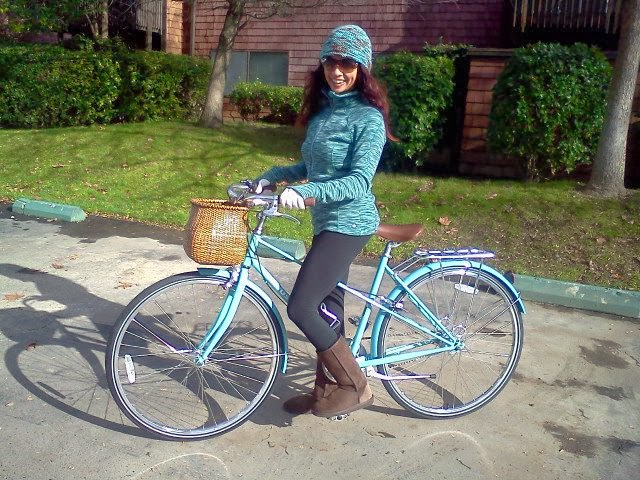 I came home from work one evening and saw an email from Sonya. She couldn't remember where, but she had seen a link to my blog where I asked for women to share their stories.

This is a humbling and exciting thing! For once it wasn't me randomly emailing people I found, but someone emailing me!

Sonya's story really resonated with me; similar in some spots to what I experienced when I got back on a bike.


It may not be mountain biking or something equally as daring-but it is inspiring. A real woman in the real world-finding love with biking.

Here's a little more about Sonya

I'm 47 years old and I work at a university as a Research Officer...and recently just graduated with my master's degree in Public History.

When did you first start riding a bike?
As a child, I rode my Schwinn Li’l Chick everywhere.  After moving to a new neighborhood when I was a pre-teen, I gave up riding my bike altogether because we no longer lived in an area where it was safe for kids to ride bikes as we were butted up against one of the busiest streets in Sacramento.  But at the age of 44, I decided it was time for me to start riding again!  It was only three years ago when a friend and I saw a Huffy cruiser on Craigslist – we drove right out to the location of the bike and within minutes of seeing this used, single speed, light blue, coaster brakes, heavy Huffy with a pink skull bell on it – I was in love!  I became the new owner of a bike I didn’t even know how to ride!  For a good week I was afraid to even get on my bike!  Shortly thereafter I began walking my bike to a nearby church parking lot to practice – or rather, re-learn – how to ride a bike.

What motivated you to ride as much as you have over the years?
Somehow I became brave enough to start commuting to work by bike.  I was so happy that I was finally out there with all the other cyclists who were on their sleek and sexy fast bikes - while I was proudly on my Huffy.  As I continued to ride to work regularly, I noticed how much better I felt about getting up in the morning and going to work and then de-stressing on my ride home.  I started losing weight without even trying.  I was saving money on gas and maintenance on my car.  I was discovering a new way of life and contributing to an environmentally friendlier earth.  In addition, I started pushing myself on the weekends riding up and down the bike trail along the river as far as I could go on a 40-pound Huffy.  Biking became my mode of transportation, my form of exercise, my entertainment, my means of relieving stress – my everything.

Do you remember how you felt on your first commuter ride?
I remember the first time I started to commute by bike - the friend who took me to buy the bike rode with me on my first commute to work.  I was extremely nervous.  As my friend escorted me to work that morning I remember telling him I felt like he was walking his kindergartner to her first day of school!  That was how scared, impressionable, nervous, and excited I was feeling.  When it was time to head home from work that day, my friend came to pick me up.  Boy was I grateful to see his face that afternoon!

If you had nervousness at all, what do you do or think to overcome it?
To overcome the nervousness I had early on, I merely kept riding!  Each day I knew I had to get back on my bike and ride to work and soon enough the fears and anxiety would go away.  Riding the same path on a daily basis helped me build up the confidence I needed.  I also asked friends and neighbors for tips on how they made their commute safer.  After hearing so many people tell me “you’ll be fine”, eventually I was convinced that, yes, I am absolutely fine and I can do this!  As I started doing much longer rides on the weekends on the trail, my short 20-minute work commute became easy breezy!

If you are a commuter, what are some of the challenges you face and how do you overcome them?
Challenges of commuting by bike are great but the benefits gained far outweigh the obstacles.  Riding to and from work during rush hour is not always relaxing and stress-free as you attempt to cross one of the most dangerous streets in your city (my life has certainly come full-circle!)  On almost a daily basis I encounter drivers who cut me off at intersections, come flying out of driveways or parking lots without fully stopping, many who are just simply impatient.  The only way to overcome this is to always be alert, focused and aware of your surroundings at all times on your ride.  In addition to challenges caused by cars and drivers, there are also other simpler hindrances one has to deal with - these include, waking up on time to allow enough time to commute by bike rather than racing by car to get to work; the challenge of still looking professional (dress, makeup, hair) by the time you arrive to work by bike; and of course, if you forget something at home, or all of a sudden have an unplanned meeting that you have to rush out to, it’s not always easy to handle these situations when on bike.

Have you had a bike biff?  If so, how did you recover on a physical/mental/emotional level?
I have had a bike biff.  Well, it was a bit greater than biffing it.  I was hit by a car and landed on the hood, and then thrown off of it onto …ready for this… that same dangerous street in Sacramento that I previously mentioned…during rush hour traffic.  I had been riding for about a year and a half when I was hit – it was one of the most traumatic experiences I have ever been through.  I am really not sure I ever mentally or emotionally recovered from the incident.  I ended up with a concussion, sprained shoulder and clavicle, and sprained ankle – many say I was lucky.  All things considered, I was very lucky.  Physical therapy repaired the physical injuries – but nothing really repairs the emotional injuries.  As soon as I possibly could I got back on my bike and rode by myself out to the scene of the incident.  I had to do that for me but it didn’t cure anything – it just heightened the flashbacks.  I didn’t ride my bike again for several months – for so many reasons I was simply unable to.  Finally I talked to someone whom I never met before but I knew she went through her own horrific experience.  Out of all the things she told me, one thing really stuck with me – she said if ever I felt hesitant or tentative or anxious about anything to just pull over.  She said to pull my bike over and be calm and don’t start riding again until I feel better or call someone to pick me up if necessary.  Just hearing that bit of advice helped me in so many ways.  It helped me believe that I could get back out there on my bike and ride and that there would be nothing to be afraid of because I can always stop if I need to.

Now, two years later, I assist with the coordination of our local Ride of Silence.  This will be my second year in helping coordinate the efforts of this very important ride.  My involvement in helping to spread the word to protect all cyclists and to honor those that have been killed has given me a sense of peace and strength.  My traumatic experience has prompted me to do what I can to bring awareness to our community that we all must share the road because these are human beings’ lives which are being put at risk daily.

What do you love about riding your bike?
I love the feeling of freedom and independence riding a bike gives me.  It’s what everyone has said before yet so true!  The wind in my hair – the efficiency of not being stuck in traffic – saving money – saving the earth – being self-reliant – feeling healthier – the list goes on and on!  Riding my very simple bike gives me great feelings of joy and euphoria.  Even to this day, on my regular weekend rides, I encounter the same small “rolling hills” on the bike trail - and each and every time I go over these little hills, I still get butterflies in my stomach and smiles on my face just like I did the very first time I went over them!  The pleasure and adventure of riding a bicycle doesn’t go away – it only gets better every time you get outside and go for a ride!

Have you volunteered with any bike-related organizations?
I have volunteered only once before with the Sacramento Area Bicycle Advocates...but hope to do more of it now that I have finished school!
One of the first things I did when I first started learning how to ride again was I learned how to completely strip a bicycle, give it a tuneup, and then rebuild it!  That was actually quite challenging...but it was a very helpful way to learn about all the various components and parts of a bicycle and how to fix them.  I did that at the Sacramento Bicycle Kitchen where they have volunteers that help you do that kind of thing.  But perhaps my greatest involvement in the bicycling community is my involvement with the Ride of Silence in Sacramento.  Not sure if you are familiar with the Ride of Silence ...but it is a worldwide ride that happens annually in May.  Its goal is to make people aware of cyclists and get everyone to share the road.  Sacramento has never had a very big Ride of Silence...prior to last year their number of participants were approximately 15 people at the most.  Well last year, following my accident, I decided to be one of the lead coordinators for this ride...and we upped our number of participants to 75!  I was happy about that!  This year we hope to grow it even more!
Labels: interview