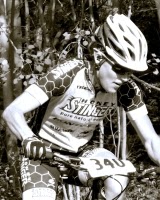 I stumbled upon The Cycle Effect while I was searching out organizations or business associated with bike riding. Reading a bit more into The Cycle Effect, I felt it was a great organization to investigate and see if I would be able to chat with any of the persons involved.

The Cycle Effect was started by Brett Donelson who wanted to expose girls to mountain biking. The big concept was to provide for those girls who weren’t able to get into the sport in some way. Either because the cost of it was an issue, transportation, etc. A quote from the website: “The Cycle Effect’s mission is to enhance the lives of young women through mountain biking and to empower them through mentoring and education.”

The Cycle Effect has grown and here is where I will introduce Jaime. This is Jaime’s first year with the Cycle Effect Summit County program as the county program director. She spoke with great excitement over how they are able to help even more girls experience the joy of bike riding.

She had coached Summit County’s Mountain Bike Jr. League and love to bring forth the “I can do this” attitude and help young women establish their own “can do” attitude.
There were many different groups of children she’s seen; the kids riding the hand-me-down carbon fiber racing bikes their parents had, the kids trying their best riding the Huffy bikes with flat pedals, and kids coming from a home where they played video games all day long. Being able to help these kids establish their own bike riding journey has been wonderful.

One of the great things about The Cycle Effect’s program is that the girls who are involved with the program also give back to their community. The Cycle Effect helps the girls by setting them up with bikes and the equipment, so as payback the girls volunteer themselves for community service projects.
The projects range anywhere from helping to build and maintain trails, helping out at races, and learning skills to pass onto others. Jamie said that she loves having the girls learn basics, such as changing a tire or what to take as snacks with you on trail rides, plus a plethora of other information. Having the girls learn and to be able to teach what they learn is very exciting.

I then talked with Jaime a bit more about her personal experiences as a rider. She was always an athletic person and came from a ski country family. She admits she was definitely more of a skier and runner vs. a bike rider. It was during her college years where she started to mountain bike; her commuter bike for campus and elsewhere was a 24” BMX bike. She laughed about it and said she still has that BMX bike that she rode during her college years.

After college Jaime moved and worked in real estate, and eventually it was a game of Ultimate Frisbee that started another chapter in her life. What I’m finding is how many women end up finding a deeper love of bike riding because of their significant others.
Jaime met her husband through Ultimate Frisbee and eventually during their dating relationship he bought Jamie her first full suspension mountain bike. Jaime said “I’ll never forget it! It was a Gary Fisher Sugar Plus.”

Jaime also has her pro license, which for me I know very little about. I feel like with the common group of individuals when one says “pro” you automatically think magazines and t.v. however, the professional athlete in the biking world doesn’t necessarily make the cover of a magazine. I asked Jaime to describe what exactly it means to be a professional rider.

Jaime said that you have to meet qualifications set by USA Triathlon and USAC (USA Cycling). There are several criteria, finishing within a place or within a percentage. You will have applications to fill out and have to submit race results and the organization(s) will either approve or deny your application(s). Jaime feels that there is a need for more professional bike riders, so it’s not impossible for one to achieve professional rider status, however, USA Triathlon and other organizations do want serious riders.

Jaime said that being a professional rider is like a “choose your adventure” book. You can define the role you play by not only your results in competing but your overall lifestyle. She loves being an ambassador by pursuing her own dreams and helping others reach theirs.

Because what Jaime does is so mountain biking centered, I asked her about how it was when she first learned to mountain bike. Was it something she easily took to or did she struggle? Jaime said that she experienced frustration when learning mountain biking. Learning the technical aspects and how to get past various sections were challenging. She said for about 4-5 years (taking into consideration she played Ultimate Frisbee as well) her knees and elbows were bloody scabs!

We talked about Jaime and her husband and I asked if he played a major role in her loving bike riding. Jamie’s husband was very pivotal, not only did they bond with the love of athletics; they also shared many adventures together. He showed her the ropes of mountain biking, “he has been a huge part of my cycling career” Jaime said. “He understands and has seen it all. He’s my biggest supporter.”

I was curious, being I have a significant other who is very invested in my bike riding, as well as teaching me the ropes of mountain biking. How was it having your boyfriend teach you something? Jaime admitted that relationships combined with teaching are difficult. It was definitely not a perfect scenario for them every time. Jaime said ultimately “make it your own.” It’s okay for two people to have a common interest but to go two different directions with it. One might choose to go downhilling with their buddies while the other goes on various trails and meet up later for a beer.

I shared some of my stories with Jaime, how I met Travis and how I got involved with bike riding. I discussed with her how I became a year-round, all-weather commuter in my first few months of riding. I told her about a friend of mine actually stepping up and becoming a year-round commuter as well, based off the fact I did it! We laughed and talked about how we both encounter individuals who think we are “crazy” for biking in all sorts of weather conditions. I love how Jaime put it “It’s like skis vs. snowshoes, why claw when you can glide?”