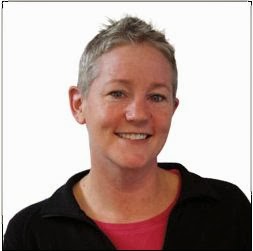 Meet Beth who works at QBP!
She was willing to contribute to both Women on Bikes and Moms on Bikes. It's been fascinating and wonderful to share experiences that other women have had or learned about biking with children.

How do you transport your child? Seat or Trailer?
When they were infants, I had them on a front mounted bike seat (the WEE Ride..which I highly recommend).  The front mounted seat was much more stable than the back seat, plus it was easy for us to talk, sing, etc.  They could see what I saw and we could talk about it, rather than looking at my butt.  I have a (Surly) Big Dummy, so when they were older I was able to ride with both kids on the back deck.  I had an extra handlebar mounted on the deck.  When my son was 2 he insisted on riding on the back of my Big Dummy like his big sister.  I practiced riding around the block, on the sidewalk, slowly with him on the back.  He kept letting go…he fell off once and never again was it an issue.  Now both my kids are riding themselves (4 &6) so I can actually fit both of them and their bikes on the Big Dummy.  If they get tired riding I just load them up like a sag wagon.

What added precautions do you take when transporting a child? (How do you keep your child safe and what do you avoid?)
I ride on the sidewalks on the busy streets.  One of the main routes to the daycare, actually has a designated lane for biking, but there are a lot of potholes and the street is horribly busy…I will not ride on certain roads like that with them.

What is one thing you would like to see different about bike safety/transport in general that would make you feel safer transporting your child via bicycle?
Bike lanes with a barrier between traffic.  I am TERRIFIED of drivers texting and on the phone…they are always swerving into the bike lanes.  At traffic lights it seems everyone is on their phone.  So, on top of barriers to bike lanes, it should be illegal to use phone while driving.

Have you ever had any close calls while biking with your child? If so, what happened and what was the outcome? Were you fearful to ride with your child again? How did you overcome?
No, not that I  know of.  I am very cautious with them and always anticipating what drivers, walkers, riders may do…

What were the biggest challenges you faced with biking at different stages of pregnancy?  Breathing and energy.  I had complications, so was banned from riding during both pregnancies after about 4 months.

Did you stop biking at all during pregnancy? Why?
Pregnancy complications.

What products do you recommend as a bike riding mom and why?
The Wee Ride for infants.  You can buy extra bars to put on different bikes, so you can easily screw the seat off and move it from bike to bike in about 1 minute.  It is much more interactive than a rear seat and the bike handling was better than a rear seat.
The Big Dummy. For legal reasons, they may not promote or market the bike for transport (especially with kids), but I called it my urban station wagon.  It is so solid and handled so easy with both kids (up to ages 4 & 6), plus, you can pack just about everything you need for any outing on it.  I have a Burley trailer, but it is way more work pulling that, also, much less interactive.  On the Dummy we could sing and talk…it is so worth the investment!

What are tips/suggestions you have for starting a bike riding routine with your child?  Don’t overdo it and push them to do too much, too soon or they won’t enjoy it.  When my kids started to ride to school, I could always load them and the bikes onto my Big Dummy if they got too tired, or, sometimes I pull a trailer along too and toss the bikes into that.